After months and months of the agonizing offseason, the moment we’d all been waiting for came and went. It left Chicago fans enraged, Green Bay fans slightly worried, and the rest of us… asleep.

But fear not. The rest of the Week 1 slate promises more exciting action where storylines, such as the return of Carson Wentz, the era of Jacoby Brissett, the never-ending Antonio Brown soap opera, will finally take the field. And though the season has not yet begun for the majority of teams, there are already injury concerns to keep an eye on.

Here is a rundown of every matchup’s notable injuries that might impact fantasy performance.

All odds courtesy of FanDuel.

Despite nursing a strained hamstring that has him listed as questionable for Sunday, Vikings WR Stefon Diggs is expected to play against the Falcons, per source.

Fantasy Impact: Keep your eye on Stefon Diggs. He is expected to play, but if he is limited in any way it would mean an increase in targets for Adam Thielen and Kyle Rudolph on a Vikings team that sorely lacks WR depth. The Falcons may have trouble containing Linval Joseph and Danielle Hunter if their line is depleted due to Gono’s possible absence.

Fantasy Impact: Robby Anderson appeared on the report earlier in the week, but will definitely suit up Sunday. If you were starting Andre Roberts or Tyler Kroft, your lineup was already in a lot of trouble. No significant impact in the Bills offense due to the absence of these guys.

Fantasy Impact: Dareus makes life difficult for opposing offensive lines, so Kansas City should hope for his absence. With both Robinson and Ogbuehi out at left tackle, Fournette may have a tough game in what is already a matchup where the Jaguars may have to throw a lot. 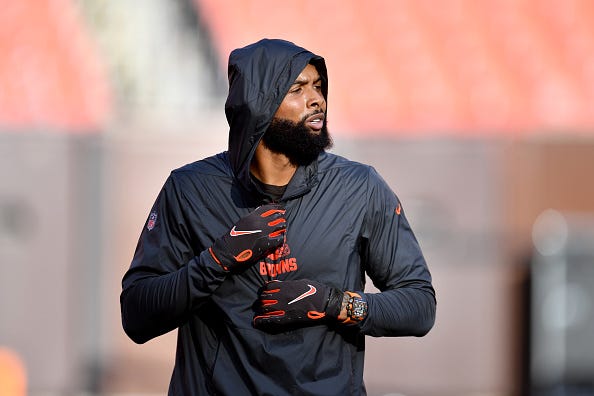 Fantasy Impact: It will be interesting to see how Beckham fares in his first game as a Cleveland Brown. He says his hip is limiting his full athletic ability, but will be a full-go without any designation. Avoid him in DFS, but it’s nearly impossible to bench who was likely your second-round pick.

Fantasy Impact: Jeffery has already gotten the okay from Doug Pederson to play on Sunday after injuring his bicep in practice. Barnett, a major piece of the Birds’ fearsome defensive line, makes life a little bit easier for Derrius Guice, but Adrian Peterson was surprisingly listed as inactive. He is not injured, but the decision not to suit him up for the opener reportedly did not sit well with his teammates. Meanwhile, Trent Williams continues his holdout, and Jordan Reed won’t be available, meaning the Redskins’ paltry offense is even more shaky.

From @NFLGameDay: The #Redskins‘ making Adrian Peterson inactive today vs. the #Eagles didn’t sit well with veterans in the locker room. Watch this one. pic.twitter.com/MISX7KoKWU

Fantasy Impact: This has been coming for a while. Boyd should see a ton of targets.

Fantasy Impact: One of the better defensive players on the Colts is inactive, but it shouldn’t have a huge fantasy impact. Much of this one, as we all know, falls on Jacoby Brissett and how he can counter the sturdy Chargers offense.

Fantasy Impact: The Cardinals offensive line needs all the help it can get after last season, and Gilbert’s absence isn’t a promising start.

Fantasy Impact: Evans, who missed Friday’s practice with an illness, comes as a surprise on the report. It does not appear that will keep him out on Sunday, but it’s a situation that must be monitored. Chris Godwin, already a viable WR2, would become a WR1 candidate in his absence.

Fantasy Impact: The former WR1 has become an oft-ailing option on the Patriots, but he could find time in Belichick’s offense. However, for this week, those prospects seem bleak with the reinstatement of Josh Gordon and a healthy Julian Edelman. 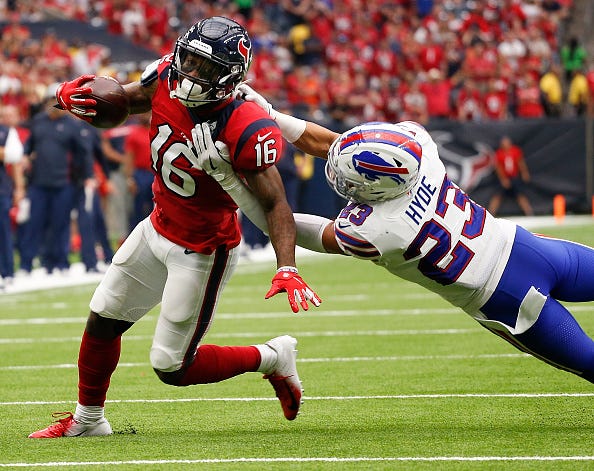 Fantasy Impact: Coutee has been on the injury report for a while, and it’s long been suspected that he’d miss some time. Kenny Stills and Will Fuller will fight for targets behind DeAndre Hopkins, while Duke Johnson will likely see targets regardless of the WR situation.