Mason Rudolph was hit by Earl Thomas in one of the hardest-to-watch moments in football history. His limp body collapsed to the ground and, for a few moments, the heartwrenching display on the field by his teammates made it seem like the young man’s football career may well be over.

Miraculously, the league could clear him to play again as soon as next week, but for now there will be another new starting quarterback in the league for Week 6 in Devlin Hodges. He will be the 43rd quarterback to make a start in 2019 so far.

Hopefully, we can avoid a 44th. Here are the other fantasy-relevant injuries to keep your eye out for this week.

Fantasy Impact: No one is too sure when/if Cam will return as the starting quarterback this season, and this week doesn’t make it any clearer.

Fantasy Impact: One of the more intriguing games of Week 6 actually takes place between the bottom two teams, whose defenses are both so bad that there is actually some fantasy appeal. Washington will be without its top tight ends, but Terry McLaurin is back to full speed. He and Chris Thompson should get plenty of targets. Kalen Ballage is questionable with a foot injury, and should he be held out, Kenyan Drake becomes a very intriguing play. Drake’s floor-to-ceiling range would become as wide as possible in such an unpredictable matchup.

Even though Jaguars’ owner Shad Khan said he expected Jalen Ramsey to play today, he will not. Ramsey is inactive. Again.

Fantasy Impact: Kamara is the only injury of the three mentioned above that needs to be monitored as his absence leaves a gaping hole in the Saints’ offensive attack. He was limited Thursday but completely missed all of Friday’s practice, leaving questions as to his availability. Brees is seeking a return before the team’s Week 9 bye, per Saints Wire (USA Today).

Fantasy Impact: Green’s absence continues, meaning that Tyler Boyd and Auden Tate will carry the load once again. While Andrews should be good to go, Marquise Brown’s availability could be in question right up until game-time, so have another option ready for deployment.

Fantasy Impact: Chris Carson was initially on the report but managed to get off of it. Penny will likely do the same by game-time as he logged a full practice later in the week.

Fantasy Impact: D-Jax misses his fourth straight game and should be targeting a return next week, but for now his role as the downfield speedster will again be filled by the less-effective Nelson Agholor.

Fantasy Impact: Damiere Byrd has been on the injury report all season, so this is nothing new. What is new and important to monitor are the statuses of David Johnson and Christian Kirk. Kirk will be a game-time decision, though the optimism surrounding his availability has fluctuated throughout the week. According to Cards Wire (USA Today), Johnson won’t play “unless he’s at full speed,” and his absence would give way to Chase Edmonds in a lead role. 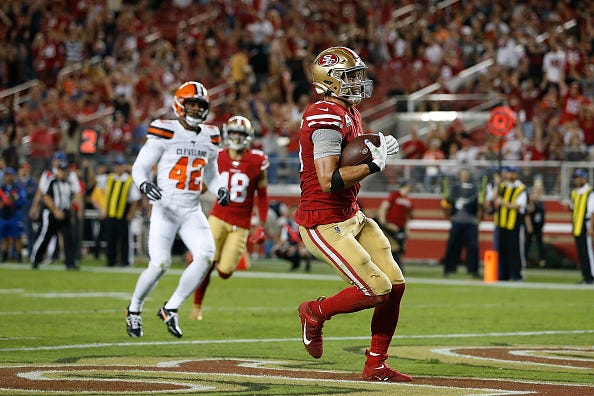 Fantasy Impact: Kittle’s groin injury came during practice, but Niners Wire (USA Today) reports that Kyle Shanahan “expects Kittle to play.” The news isn’t so good for the Rams, though, as Gurley has gone from questionable to doubtful, paving the way for Malcolm Brown to earn the start.

Fantasy Impact: While Randall Cobb is the only directly-relevant fantasy player on the report, the two offensive linemen featured are more important to the team’s overall success. After a messy game against the Packers, the Cowboys need all the strength they can get and, fortunately for Dallas fans, Jerry Jones expects at least one of them to play Sunday (via Pro Football Talk, NBC Sports).

Fantasy Impact: Mason Rudolph suffered one of the most devastating blows we’ve ever seen and will be out for a good while as Devlin Hodges takes over at quarterback. Jaylen Samuels and James Washington are both out, meaning a lot will fall on the shoulders of James Conner, JuJu Smith-Schuster, and newly-healthy Vance McDonald. Hunter Henry may make his first appearance since Week 1 when he caught 4 balls for 60 yards.

Fantasy Impact: Hockenson logged a full practice but still needs to pass the league’s concussion protocol (the same goes for Jamaal Williams). Rodgers was a surprise name on the Packers injury report after logging two limited practices, but this little noise surrounding his injury should suggest that he’s good to play. Davante Adams has extra time to heal from his injury before Monday night, but he hasn’t participated in practice and seems unlikely to suit up for the second-straight contest.