This past week, we saw rookies surpass expectations, QB battles stall and cringe-worthy injuries. In other words, Week 1 of the NFL preseason has officially come and gone. Here is your weekly dose of the fantasy implications of various events throughout the league. 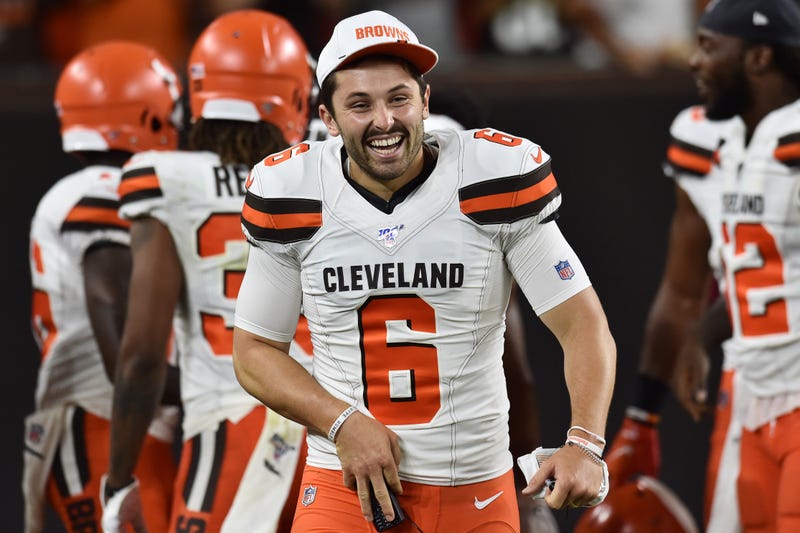 Mayfield didn’t need either of his top-two receivers, his tight end, or newly-traded Duke Johnson Jr. to put on a show in his lone drive against the Redskins. WR Antonio Callaway was suspended later in the week.

Fantasy Fallout: 5-for-6, 77 yards, and a touchdown. Doesn’t get much more efficient than that across one drive. The Browns flew up the field, capping off the drive with a Mayfield strike to bigtime sleeper Rashard Higgins for a 24-yard TD, whose value rises more with Callaway’s suspension. Granted, the Redskins defense isn’t very good. But the way Mayfield left the defense straggling and Nick Chubb contributed on the ground and through the air indicated that the Browns offense is going to be a force this season. Chubb’s stock goes up as a result of DJJ’s departure, and Kareem Hunt figures to be a more valuable commodity when he returns.

Texans Offensive Shakeup
In the wake of D’Onta Foreman’s release, the Texans acquired Duke Johnson from the Browns for a draft pick (per NFL.com reporter Tom Pelissero). Keke Coutee was helped off the field in their first preseason game due to an ankle injury, but it’s being called minor (per Aaron Wilson of the Houston Chronicle).

Fantasy Fallout: The DJJ move makes a ton of sense for the Texans. Fantasy-wise, it impacts nearly every fantasy relevant player for Houston. It won’t help fellow running back Lamar Miller, but I don’t think it necessarily hurts Miller either, as Johnson isn’t one to take away carries from the lead back. Johnson will be yet another dangerous weapon at the disposal of Deshaun Watson, who now his four very strong target options and should see his stock rise. Hopkins will still dominate the targets, and Fuller’s deep-threat presence probably won’t be affected too much. Coutee would have likely been affected most by the trade, and adding the ankle injury makes his prospects shakier. That said, every player mentioned above should be drafted at some point. Johnson’s value in PPR is increased further.

Fantasy Fallout: This showing should generate some excitement for Murray, who was zipping the ball and stretching the field horizontally on a variety of passing plays. There were passes from the pocket, passes on the run, and a creative option-screen to Fitzgerald, all of which should generate excitement for the first-overall draft pick. The Cardinals will be a fun offense this season, and the early preview shows that both Murray and David Johnson will have high usage. As for the receiving corps, there might be a ceiling to how dominant any one of them can become, as it looks like the ball will move around often in a quick scheme.

New York Teams Square Off And Show QB Promise
Both Daniel Jones and Sam Darnold had strong showings in their preseason week one matchup. Jones finished a perfect 5-for-5 with 67 yards and a touchdown to Bennie Fowler. Darnold found new addition Jamison Crowder on a similarly impressive drive.

Fantasy Fallout: While it’s encouraging to each of the fan bases that their signal-callers performed well to start out the preseason, fantasy football players should stick to the bevy of trustworthy options at QB. This game didn’t reveal much in the way of receiving options, however, as Darnold targeted four different receivers in his lone drive while Robby Anderson was inactive. If Anderson is the number one passing option, it remains to be seen whether Chris Herndon, Jamison Crowder, Quincy Enunwa, or someone in the backfield is next in line. Daniel Jones made a real case for his position as the starter and seemed to sync up with both Cody Latimer and Bennie Fowler, making their prospects intriguing within the discombobulated receiver corps.

Fantasy Fallout: It was also worth noting that Peyton Barber, not Ronald Jones, got most of the work in the opening drive. Bruce Arians looks to bring a new dimension to the loaded Bucs offense, and Winston should be on every fantasy player’s radar as a bounce-back candidate. While he may not be the most effective starter for an NFL team’s success, it’s not all that bad if he throws a few touchdowns and a few picks in fantasy. As long as the high volume is there, which it should be, Winston is definitely worth a nod in your drafts. Mike Evans and Godwin are both top-20 receiving options as a result.

Lamar Jackson’s Improved Passing On Display Against Jags
Jackson led two scoring drives (a field goal and a touchdown) in three possessions of work to open up the preseason. Willie Sneak was the recipient of the game’s lone passing touchdown, while the defense dominated the Jaguars lowly offense in the absence of Nick Foles and Leonard Fournette,

Fantasy Fallout: Jackson did have an overthrow, but a penalty allowed him a new set of downs. Though it was Snead who caught the touchdown on a short pass, Jackson hit receiver Chris Moore twice for 48 yards, who may arise as a sneaky sleeper candidate if he is Jackson’s preferred target. However, with plenty of receivers in the mix, like highly-touted rookie Miles Boykin (four receptions on nine targets), it’s hard to trust any receiver in Baltimore.

Fantasy Fallout: The Boston Herald’s Kevin Duffy reports that Harry’s injury doesn’t appear major, which is a great sign for the Patriots, and the other rookies impressed as well. It’s impossible to know which one might surge ahead of the others, especially after a performance like this, but if they’re all worth late-round flier picks. The news is much more bleak for Detroit. Kearse broke his leg and has been placed on injured reserve (via NFL.com’s Ian Rapoport). Luckily, Kenny Golloday, Marvin Jones, and Danny Amendola is a pretty impressive trio that Matt Stafford can work with.

Mike Davis Gets Start, David Montgomery Ends Up Winner
Montgomery put together a very solid performance, racking up 46 total yards and a touchdown in less than one half of play against Carolina.

Fantasy Fallout: Tarik Cohen didn’t play, but Montgomery still seems like the better running back in fantasy value for the Bears. Cohen will likely be an active part of the passing game, which especially helps his PPR prospects, but Montgomery should be the guy that does most of the running. If the preseason opener was any indication, Montgomery will handle the responsibility quite effectively, and could even step into a dual threat role despite Cohen’s presence. Davis had just nine yards on three carries. 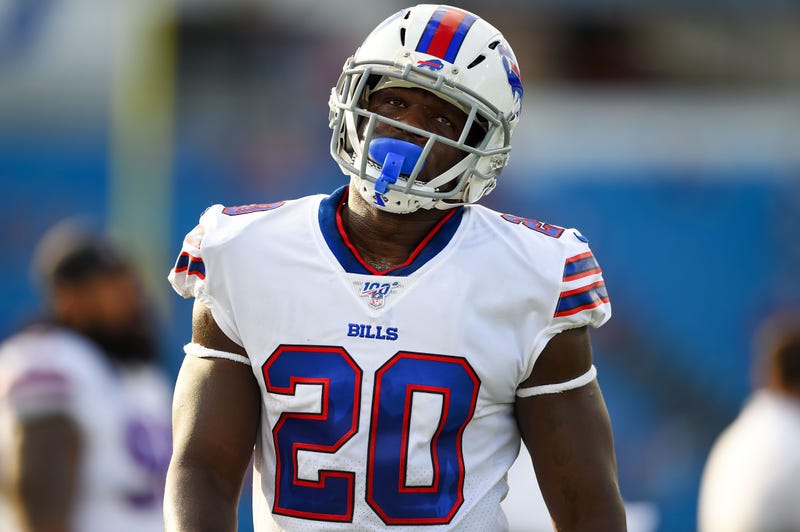 Bills Backfield Stays Messy
After LeSean McCoy was reportedly touted as “the guy” in the Bills backfield, Frank Gore was the first team back to open up the preseason games, while McCoy will fill in that role for the second game. Devin Singletary didn’t do much to support the hype he’s received, with some nice-looking plays but an underwhelming stat line (nine carries for 27 yards).

Fantasy Fallout: The biggest run of the game came in the fourth quarter from Christian Wade, who turned his first NFL carry into a 65-yard touchdown. We’ll see if he gets any reps with better units as the preseason progresses, but overall this is a backfield to avoid. If Singletary can surpass both McCoy and Gore at some point in the season, his sleeper value will likely be fulfilled, but it’s hard to draft someone in such an inconsistent offense.

Ups And Downs In Josh Rosen’s Miami Debut
Rosen played the entire second quarter after Fitzpatrick had a subpar showing in the first. After leading a solid drive filled with penalties to begin the quarter, Rosen threw a bad interception on a pass from the pocket and was constantly hurried thereafter. He managed to make a couple great throws.

Fantasy Fallout: The starting gig still seems to be completely up for grabs, but no one should be grabbing Rosen or Fitzpatrick in any drafts even after the situation is figured out. A more important fantasy battle took place in the backfield, as Kalen Ballage outplayed Kenyan Drake and received an important goal line carry that resulted in a touchdown.

Dwayne Haskins Goes From Unlucky To Bad In Debut
What was a great beginning to Haskins’s preseason start was derailed after a horrendous fumble ruined a promising drive. Two ugly interceptions marked the rest of the rookie’s performance, but he showed off some promising mobility.

Fantasy Fallout: The QB gig has changed hands between Haskins, Colt McCoy, and Case Keenum, and Keenum got the nod in game one as McCoy was not quite healthy enough. Keenum finished 4-for-9 with 60 yards and a touchdown, while Haskins wound up with two picks, no scores, and an 8-for-14 finish. The Browns trounced the Redskins in this one, and the fantasy situation in Washington is all too clear: avoid if possible. 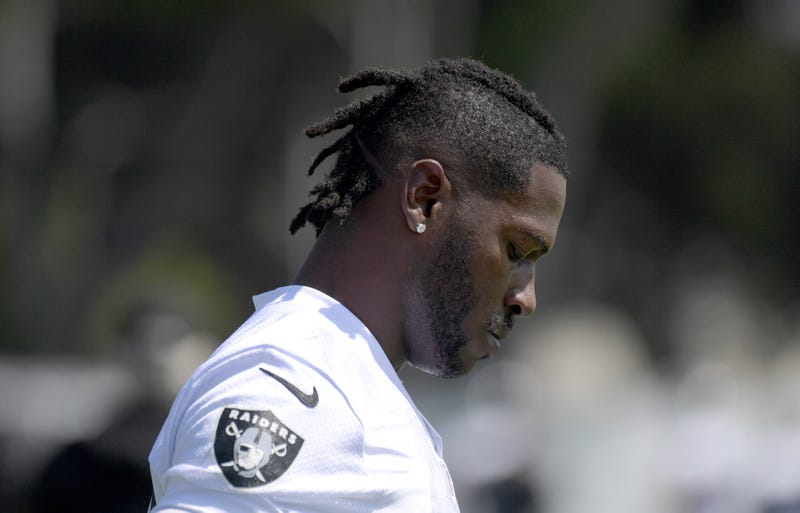 Antonio Brown's future with the Raiders (and in the NFL) is unclear. Photo credit (Kirby Lee/USA Today Images)

Antonio Brown Threatens Retirement
If you hadn’t heard his name enough this offseason, Brown gave the media another interesting tidbit, claiming he won’t play if the league disallows him from wearing his prohibited helmet style (via ESPN’s Adam Schefter).

Fantasy Fallout: Frostbitten feet was a pretty unusual reason to stay on the sidelines in the preseason, but it was an injury nonetheless for the Raiders’ new star. But this new development is just plain weird. While the NFL doesn’t appear to be budging, I’m still skeptical that Brown will legitimately quit playing football without his old helmet design. He’s had some dramatic moments in the past, and the Raiders’ biggest acquisition in a long time should take the field this season… or so we think. Brown might surprise us all (and will additionally supply us with some good TV on HBO’s Hard Knocks.)