This is the time of the season when fantasy drafts usually start up, making it a crucial point in the season to pay attention to the minor details in the preseason that could give you a step up in your draft. Whether it’s a minor injury, a shift in the depth chart, or an unexpected talent rising the ranks, this rundown has you covered on many of the league’s happenings as the regular season draws nearer.

AB will finally accept his lost helmet grievance and will select an approved helmet so that he can join in on game action (via Pro Football Talk on NBC Sports).

Fantasy Fallout: Will this finally end the off-field issues that make Brown’s draft prospects a little bit riskier than others? Hopefully. Because Brown is a prime candidate to be the number one overall receiver in fantasy despite his new surroundings. This is mainly because the opportunity will always be there in Oakland, whether it’s due to the bad defense or the fact that Carr should target Brown significantly more than any of his other receivers.There’s some risk, but I don’t envision any problems carrying into the regular season. He’s worth a pick at some point in round two. 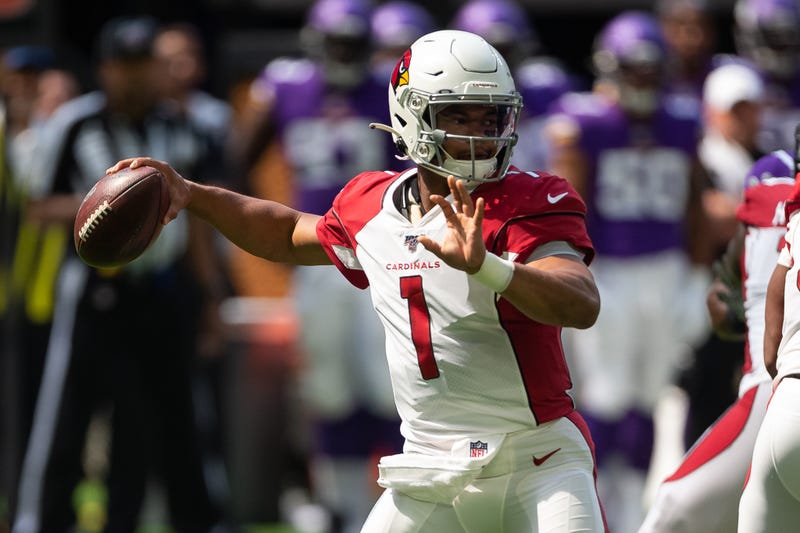 Murray performed much better in his third preseason performance, though it wasn’t hard to outperform his Week 2 stat line.

Fantasy Fallout: With Kyler Murray, you’re getting the same risk as drafting David Johnson but at a different position. Both are extremely talented players, but both of them are protected by one of the worst offensive lines in football. If Murray can’t stay protected for long, he’ll have a difficult time performing at a high level no matter how mobile he is. If you take Murray as your QB, back him up with one of the older, more reliable guys like Philip Rivers or Ben Roethlisberger. 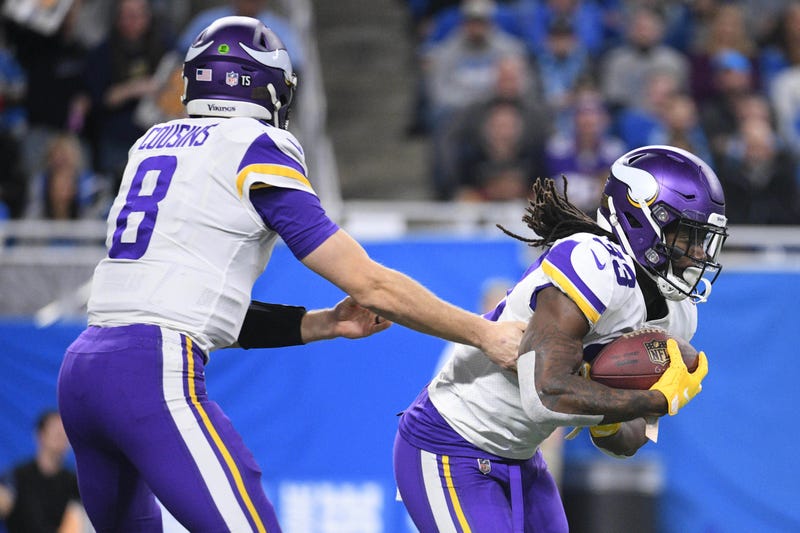 All it took was two carries for the third-year back to find the end zone in Minnesota’s preseason game against Arizona.

Fantasy Fallout: This could finally be the year that Cook puts it all together. We know about his massive talent and this was just another showcase of that. But it’s his durability that scares away several potential fantasy owners from taking Cook in the early or mid-second round. However, with the likely run-first approach and the perfect scheme for fantasy success, Cook has as high a ceiling as any other running back in the league. 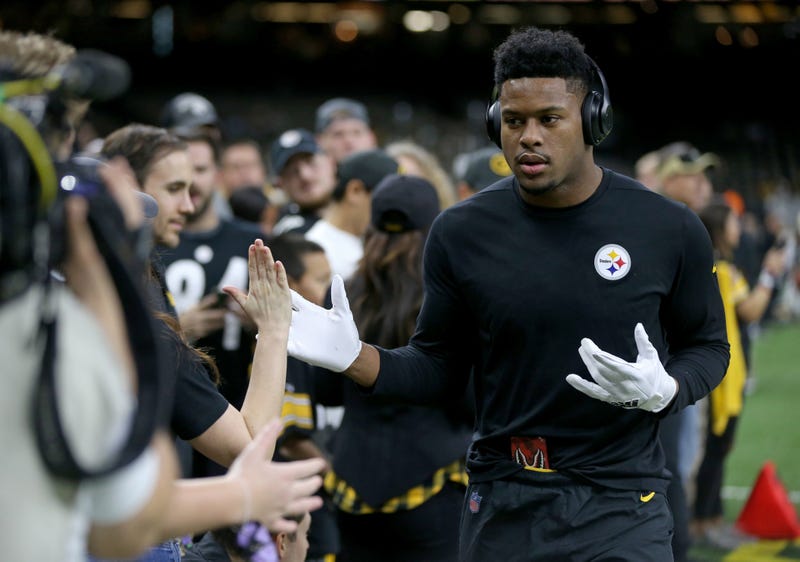 JuJu Smith-Schuster will take over as the Steelers No. 1 wideout in 2019. Photo credit (Chuck Cook/USA Today Images)

Star Receivers Making The Most Of Preseason Games

In their limited work in their preseason Week 3 matchups, stud receivers like JuJu Smith-Schuster, Michael Thomas, and Chris Godwin were able to put up numbers.

Fantasy Fallout: Juju Smith-Schuster will be Ben Roethlisberger’s new Antonio Brown this season, practically securing him a WR1 floor, with the upside of being the best receiver in the draft. Juju caught a touchdown from Big Ben against the Titans this Sunday. Thomas, who became a reception machine down the stretch last season, linked up with Drew Brees in the endzone for a beautiful leaping grab in the face of tremendous pressure against the Jets. He also seems like a lock to replicate his WR1 numbers. And even though Jameis Winston put up poor numbers against the Browns on Friday, Chris Godwin was able to secure four catches for 52 yards in just a small portion of work. His hype continues to build, and he could easily team up with Mike Evans to form a duo of two top-15 receivers. 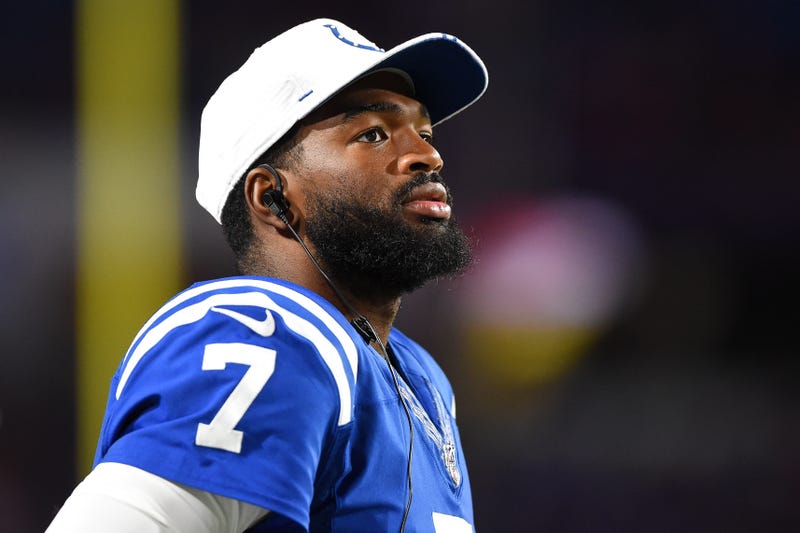 In a shocking move, Andrew Luck retired from the NFL, according to an initial report from Adam Schefter. Jacoby Brissett will become the starting quarterback for Indianapolis for the time being.

Fantasy Fallout: Woah. What a change of plans for the Colts. This move negatively affects every player on the Colts offense except for maybe Marlon Mack, but defenses may look to focus on him more now that Luck is no longer running the show. T.Y. Hilton becomes difficult to draft with confidence based on his third round ADP value, and the fellow receivers and tight ends in Indy are all a little bit harder to trust. Jacoby Brissett himself won’t be a fantasy asset right away, but if he plays a strong dual-threat game, he could become a good streaming QB option. 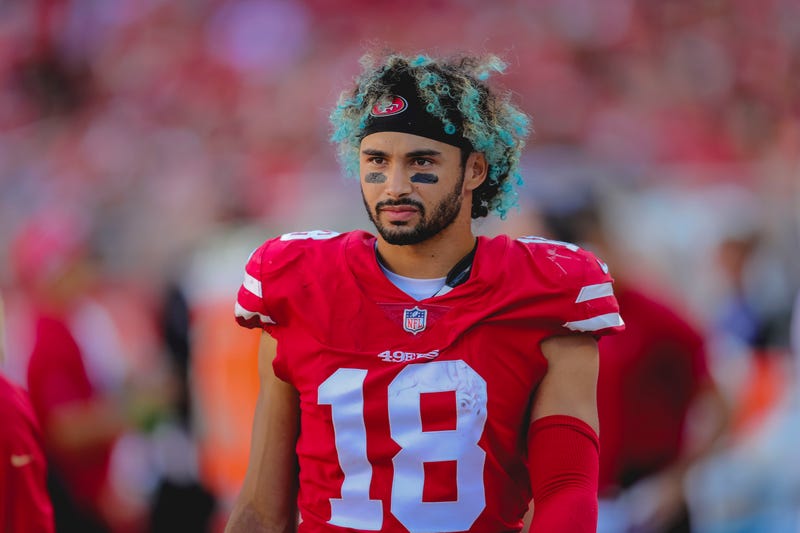 Pettis, widely presumed to be the 49ers’ number one receiver at the start of the preseason, has endured a bumpy road leading into the regular season. In addition to harsh critique from his head coach, Pettis most recently suffered a minor groin injury (via 49ers reporter Cam Inman).

Fantasy Fallout: The return of Jimmy Garoppolo means that the 49ers receiving corps outside of George Kittle has some additional fantasy value, despite Jimmy G’s underwhelming debut. Pettis seemed to be in a great position to get a large share of the targets with Marquise Goodwin’s declining stock, but the strong play of rookies Deebo Samuel and Jalen Hurd are making it tough on Pettis. It’s equally as tough to draft Pettis with confidence in upcoming drafts. Pick him as a bench receiver with a high ceiling, but without a sturdy floor to rely on. 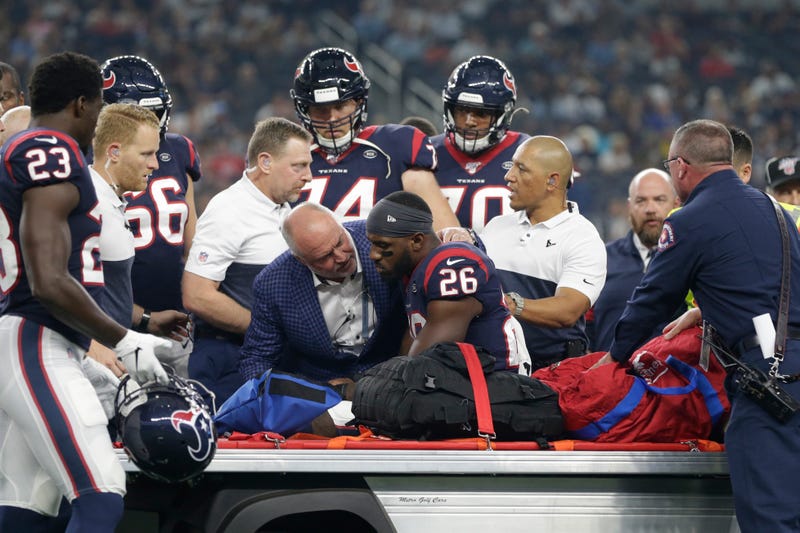 Adam Schefter officially reported that the veteran running back will miss the 2019 season with a confirmed ACL and MCL tear.

Fantasy Fallout: The end of the preseason will reveal who will become the top backup option to Miller in Houston. Damarea Crockett and Kamar Higdon seem to be two viable candidates, and the signing of Duke Johnson Jr. seems to have come at just the right time, but he won’t do much in the running game strictly because of his nature as a pass-catcher. Crockett and Higdon are both people to keep an eye on - a scenario like this could mean that one of the two burst onto the scene as a new fantasy-relevant back on a very good offensive team. 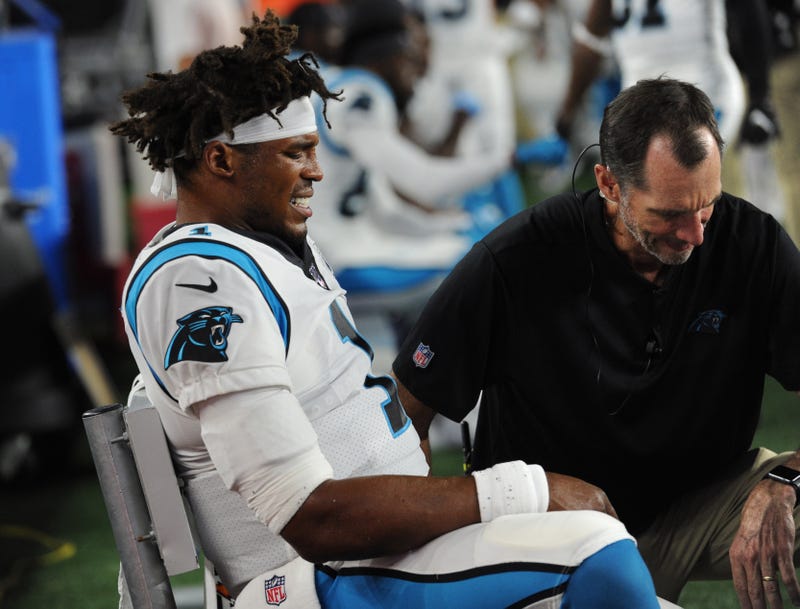 Ian Rapoport tweeted that the Panthers’ franchise centerpiece suffered a foot sprain, but head coach Ron Rivera doesn’t think that it will be a major issue.

Fantasy Fallout: The Panthers are practically nothing on offense without Newton, and so he will likely be rested throughout the remainder of the preseason in order to ensure he’s fully ready for the start of the season. He’s still draftable and doesn’t seem to be at risk for extended injury with his current foot trouble. That said, know that drafting Newton comes with a degree of risk, as he has been hobbled as of late and plays a reckless style often that could lead to more time missed. 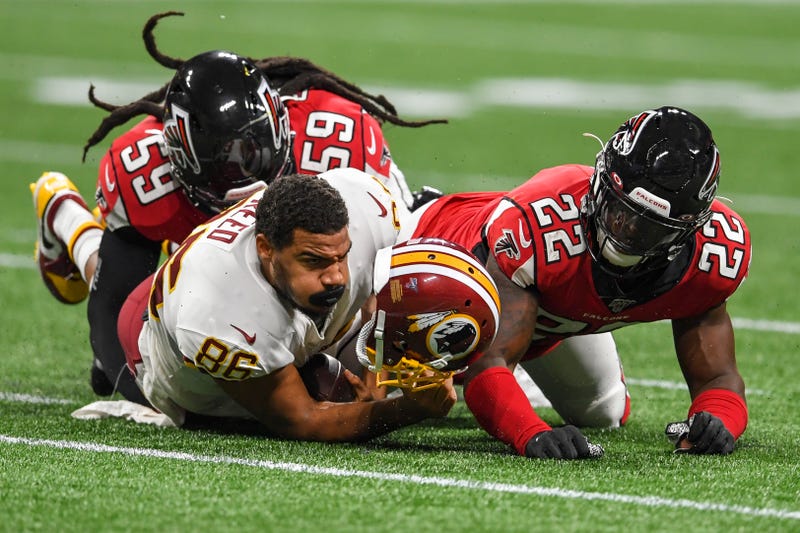 Reed left the Redskins’ third preseason game after another blow to the head. This injury might just wrap up a career that has been defined by unfortunate injuries, especially concussions.

Fantasy Fallout: At this point, several players are telling Reed that it’s best to hang up the jersey and cleats and walk away from the game for his own well being. He’s suffered seven concussions - that’s right, seven - and has also dealt with a plethora of other injuries to his lower body. He shouldn’t be drafted in fantasy leagues, and his absence hurts the Redskins offense as a whole, but this goes past fantasy football and football in general. Reed should retire for his own sake before the damage becomes irreparable.

Keep An Eye On 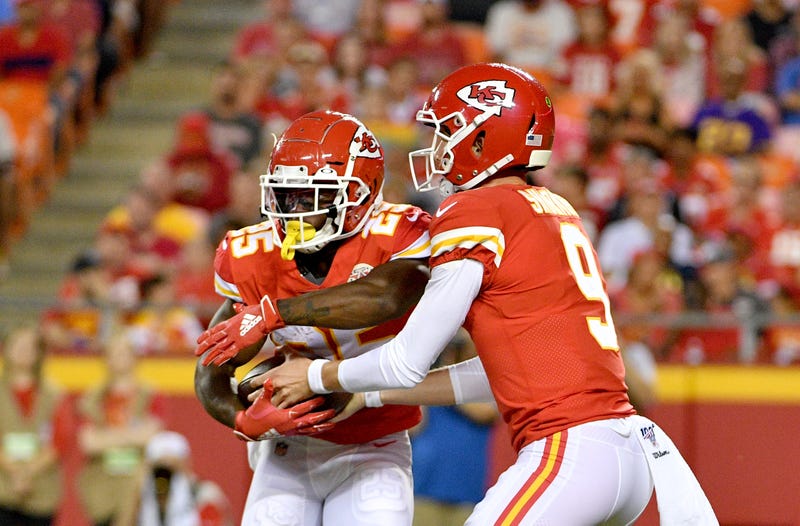 Could Darwin Thompson be the Chiefs lead back in 2019? Photo credit (Denny Medley/USA Today Images)

The latest update out of Kansas City and Andy Reid’s unstoppable offense is that rookie Darwin Thompson, not veteran Carlos Hyde, is receiving the bulk of the goal-line carries with the starting offense.

Fantasy Fallout: Thompson immediately becomes a late-round sleeper with big time upside. We’ve seen the volatility of the Kansas City backfield, in that one running back could go down to an injury and lose his starting job immediately to a backup that plays just as well. Carlos Hyde doesn’t seem next in line for that role, so Thompson is the guy that you should take to handcuff current starter Damien Williams. Williams has never had to assume a full season of work, so it wouldn’t surprise anyone if Thompson was getting major carries by some point in the season. That said, Williams impressed with an explosive touchdown reception against the 49ers on Saturday, and big plays like this can help him keep a firm grasp on the top spot. 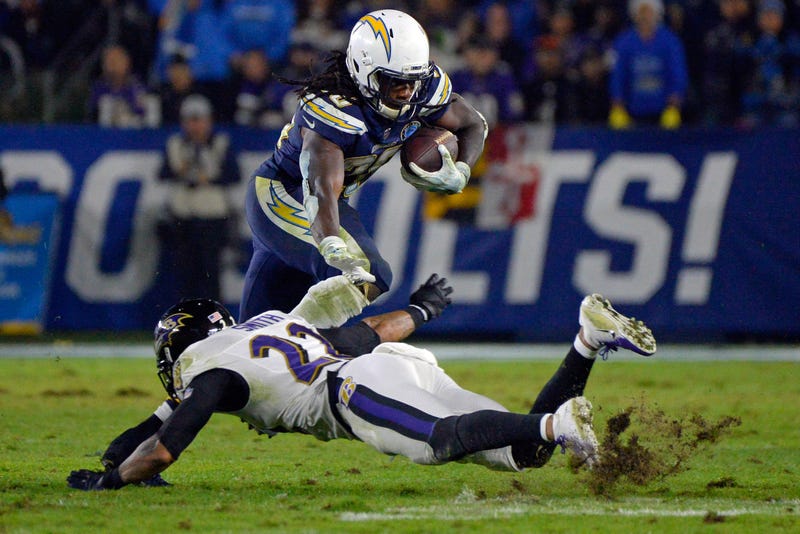 Your Weekly Running Back Holdout Update

As the past weekly roundups have stated, Ezekiel Elliot’s deal seems much more likely to get done than his Chargers counterpart. While Zeke was offered the second-highest contract at his position behind Todd Gurley (even though it still may not be enough), Melvin Gordon hasn’t gotten anywhere with the Chargers front office in their deal. Ian Rapoport announced that Gordon’s holdout will likely stretch into the regular season.

Fantasy Fallout: The situation becomes clearer when you look at draft boards and where the two running backs are being taken. Zeke is still a top-four or -five pick, and it just seems inevitable that he’ll be back. However, Tony Pollard has played very well and has crept up into sleeper territory in case anything happens. But Gordon, who was a consensus first-round pick before this situation arose, has now fallen to the fourth round of most drafts and seems to be giving way to Austin Ekeler and Justin Jackson. It’s not a bad idea to avoid Gordon entirely until this situation pans out, and with most fantasy football drafts coming soon, there may not be enough time to find out what happens in Los Angeles with the young running back. 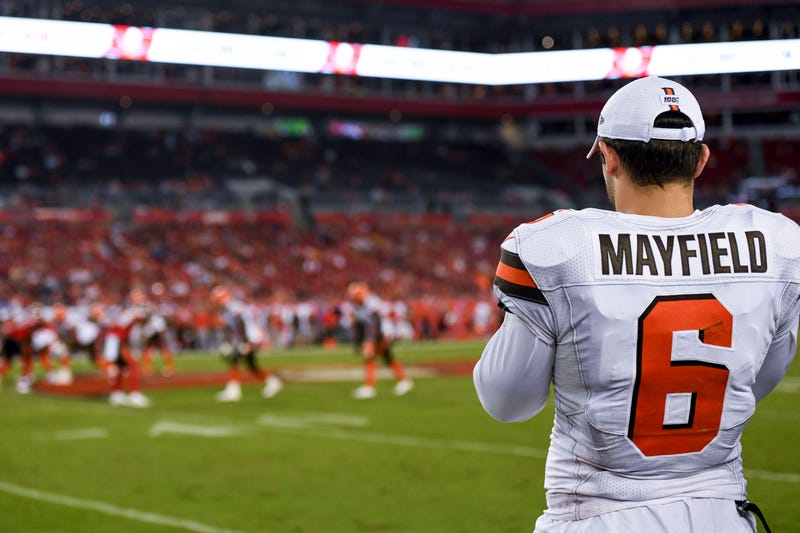 Both Baker Mayfield and Jameis Winston struggled this week in their game, ending their portion of the game with underwhelming stat lines.

Fantasy Fallout: This is one of those scenarios when you remember that it’s just the preseason and not everything is as it might seem. Mayfield was playing without a lot of his starters, and we’ve already seen him tear up opposing defenses this preseason. Winston, on the other hand, was missing Mike Evans, so it’s not completely terrible that he performed poorly. However, there is obviously more to worry about on his end because of his continual disappointing performances year in and year out. Draft Mayfield as a good starting quarterback, and try to save Winston for a backup role with breakout potential.