A historic week saw not one, two, three, or four 40-fantasy point scorers, but five of them explode in PPR leagues, leading to some high scoring weeks. For instance, Nick Kostos, host of the RADIO.COM Sports Original “You Better You Bet," was able to put up a whopping 150.1 points in the RADIO.COM Sports fantasy league, led by the 47.7 point outburst from Christian McCaffrey. Unfortunately for Nick, his team ran into a pretty impressive opponent (I wonder whose team it was?).

Thank you Aaron Jones, Michael Thomas and everyone else who made this 204-point effort possible! 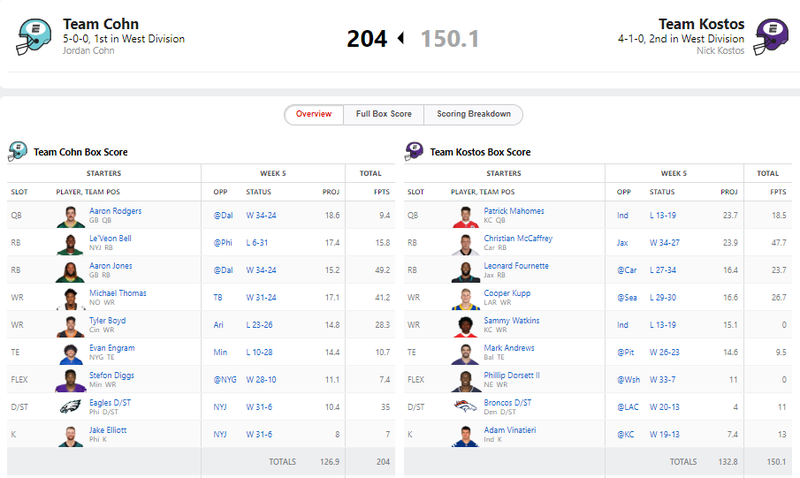 Elsewhere, Will Fuller led all scorers with a massive 53.7 PPR fantasy points, while DeShaun Watson rounded out the five 40-point scorers with his impressive display. Here’s what else happened in Week 5. 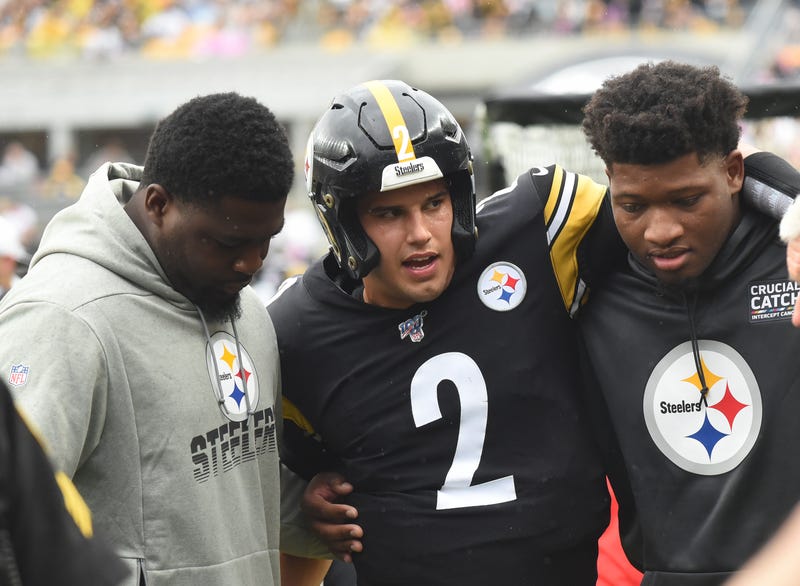 The fact that Rudolph was able to - perhaps only because of the fact that he had to after the cart broke - walk off the field after falling unconscious was nothing short of miraculous. The hit he endured from Earl Thomas was among the most difficult hits I’ve ever had to watch. Devlin Hodges took his place, and though he played well, the entire Steelers offense becomes a whole lot harder to trust moving forward in fantasy football until Hodges can prove himself. This one is bigger than fantasy football though, and everyone should be more concerned with Rudolph’s well being.

Mahomes aggravated his ankle in a rough showing against the Colts as the Chiefs’ offensive line was dominated throughout the game. Mahomes will play, but the mobility that seems to have limited him the past couple of weeks will be even more of an issue now. He’s a must-start unless he’s literally kept off the field, but he may not be the No. 1 quarterback option like he usually is. One of his primary targets, Sammy Watkins, also suffered an injury against the Colts and will be questionably heading into Week 6.

Gallman suffered a concussion and Saquon Barkley is unlikely to suit up by Thursday, so the Giants will deploy Jon Hillman and Elijhaa Penny out of the backfield. It’s definitely not the best combination, and seeing as the Giants play the Patriots, neither guys are worth starting or even picking up due to Barkley’s likely Week 7 return.

Dorsett had been a solid option for the Patriots early in the season, but has seen his production decrease lately. An injured hamstring that removed him from the game doesn’t help his case as a viable fantasy wide receiver. 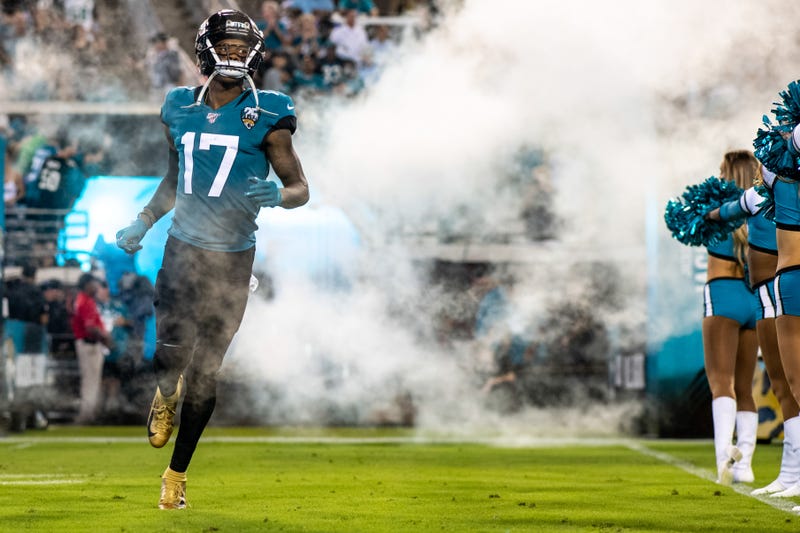 D.J. Chark has had an excellent start to the 2019 season. Photo credit (Douglas DeFelice/USA Today Images)

D.J. Chark is the No. 5 receiver in fantasy football. Think about that for a second. He was thought of as the third or fourth receiving option on a team that saw its new starting QB sustain a major injury in their first game. And he’s the fifth highest scorer at his position. Building upon that total with a monstrous 11-164-2 stat line in Week 5, big performances from Chark shouldn’t come as a surprise much longer. His connection with Gardner Minshew is the real deal.

Any time a receiver goes for 14-217-3, it comes as a surprise. I don’t care if it’s Julio Jones, Mike Evans, or even the near-unanimous first wide receiver taken off the fantasy draft board, DeAndre Hopkins. But it wasn’t Hopkins; it was his teammate. Fuller has been thought of as a weekly boom-or-bust candidate for a few years now, but a boom like this may have made him more of a must-start wide receiver until we see major regression.

How did Michael Thomas put up such a stellar performance without Brees slinging the ball? Easy. Bridgewater decided to show his best Drew Brees impersonation and dice up the Buccaneers defense for four touchdowns. He looks like a legitimate signal caller that can lead the Saints to a strong season in the otherwise-struggling NFC South, and guys like Kamara and Thomas haven’t taken much of a value hit since he’s replaced Brees. 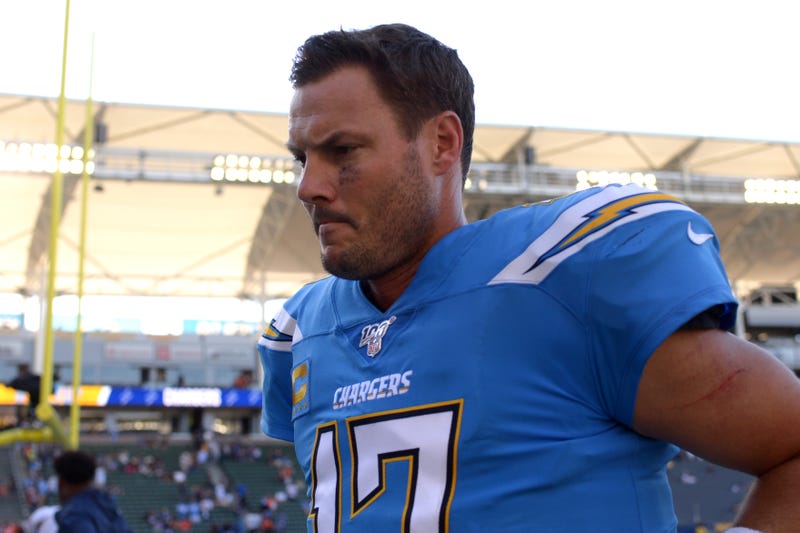 The 0-4 Denver Broncos took on the hot Rivers-Allen duo that had both been top-10 options at their position the previous two weeks and completely silenced them. The duo combined for a measly 11.9 PPR points altogether and lost a lot several owners their Week 5 matchups. The Chargers seem a bit disheveled right now, but don’t give up on Rivers and definitely do not give up on Allen. Both should pick up right where they left off in Week 4 with a matchup against the Steelers on Sunday.

Yikes. The Browns looked really, really bad against the 49ers. This was a game in which many were predicting them to win despite their underdog status, but the 49ers did nothing to make their undefeated record some flukey at all. They made the Browns look plain awful. Mayfield isn’t a reliable quarterback in fantasy or in real life, and OBJ had trouble syncing up with him on a couple of plays. Their offense is certainly capable of big performances, but the occasional dud can really put a damper on their fantasy value.

With DaVante Adams nursing a toe injury, MVS was supposed to step up and be the go-to guy for Aaron Rodgers. So much for that. Sure, it didn’t help that Aaron Jones went off to the tune of four touchdowns, but MVS was only able to reel in one-of-four targets. Geronimo Allison didn’t play much better, and their play could quite possibly improve with the return of Adams instead of in his absence. 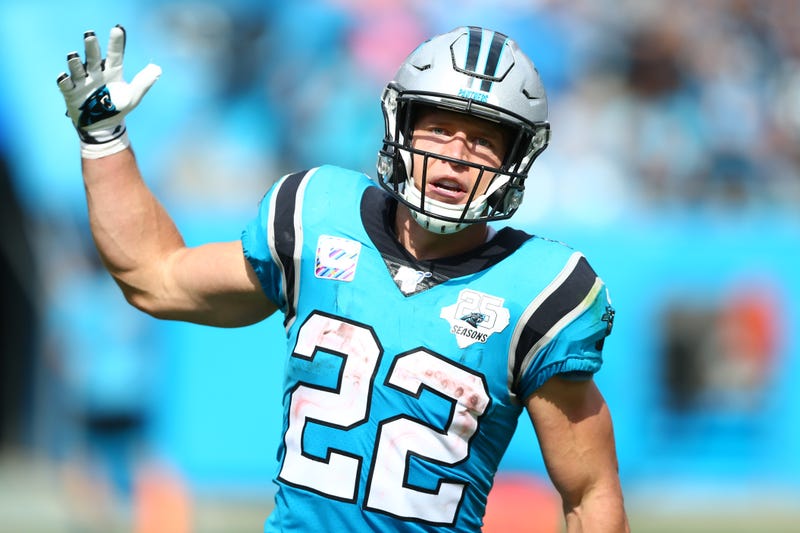 Bounceback of the Year: Dalvin Cook

Bust of the Year: Baker Mayfield