Figuring out when a certain player’s value is at its peak, or conversely at its lowest, is a special skill to have in fantasy football. Sure, there’s some luck involved; you never know for sure when a player is going to come back down to earth after an explosive start or begin to heat up after a slow one. There’s also an element of strategy, as acquiring/getting rid of one of these players at the appropriate time can give you an advantage over the entire league.

While Week 2 may seem early to make conclusions about anybody’s performance, it’s at precisely this point in the season where you can really maximize a player’s value. Let’s look at an example from last season.

DeSean Jackson was the number one wide receiver (.5 PPR scoring) in all of fantasy football through the first two weeks of 2018. A perfect 9-for-9 in his opportunities, D-Jax had gone for 275 yards and three scores, showing great chemistry with then-Bucs quarterback Ryan Fitzpatrick. At that time, it’s undoubtedly difficult to get rid of someone playing at that level.

At running back, Chris Carson disappointed owners hoping for a sophomore season breakout with just 8.3 points after the first two weeks of 2018. But in Week 3, Carson ran for 102 yards and a score, and finished out the rest of the season as the No. 11 running back.

Who are some candidates to be the D-Jax’s and Carsons of 2019? Let’s take a look. 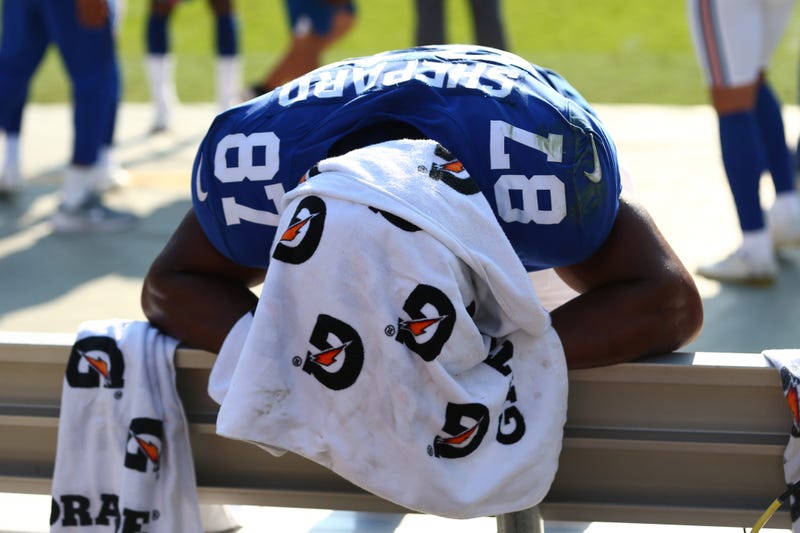 Sterling Shepard and the Giants are off to an 0-2 start to the 2019 season. Photo credit (Jeremy Brevard/USA Today Images)

It’s hard to call the start to Shepard’s 2019 campaign a disappointment as a concussion knocked him out of the season opener. However, if an owner in your league is getting fed up with his inability to take the field and the overall poor production of the Giants, he may be someone on the open market. He’s owned in 71% of Yahoo! leagues and 81% in ESPN leagues, which aren’t low numbers by any means, but are figures that show he’s not fully trusted as a stashable option.

A new era is on the horizon in New York, though, and Shepard is looking to return at just the right time. It would be pretty difficult to perform at a lower level than Eli Manning has, and Daniel Jones has a chance to earn the hearts of disgruntled Giants fans with a good rookie showing. Shepard should be the number one receiver, and though Saquon Barkley and Evan Engram are major targets, Shepard’s experience means he should easily become acclimated to the offense under Jones. Another plus: come playoff time, the Giants play three of the easiest fantasy defenses against wide receivers in the Eagles (No. 31), the Dolphins (No. 25), and the Redskins (No. 32).

Given that he’s only played a small amount this season, owners may not want to part ways with him without getting any production. But if your negotiation skills are there, he’s someone who could help your team out in a big way at a relatively low price.

There’s one top-10 receiver on the Buccaneers, but it’s not Mike Evans (it’s Chris Godwin at No. 9). In fact, Evans, who was drafted on average as the No. 8 receiver off the board, is currently No. 71 at the position. With just 11.9 points after two weeks, Evans has played second fiddle to Godwin in the pass-heavy attack, and it’s not even close.

But what may be slipping owners’ minds is that Evans was clearly the most effective target of Jameis Winston last year (370 yards more than the second-best, Adam Humphries, who’s gone), and he’s also been dealing with a recurring illness throughout the season. He’s been one of the most consistent weapons in the league, joining Antonio Brown and Julio Jones as the only receivers since 2013 with five consecutive seasons of 120 targets and 1,000 yards.

This illness won’t last forever (hopefully), and his Week 3 matchup against the Giants could very well end his streak of bad games. If you can snatch him away from a frustrated owner before that game, you’re in for a huge boost that will likely give you a top-10 receiver for the remainder of the season. 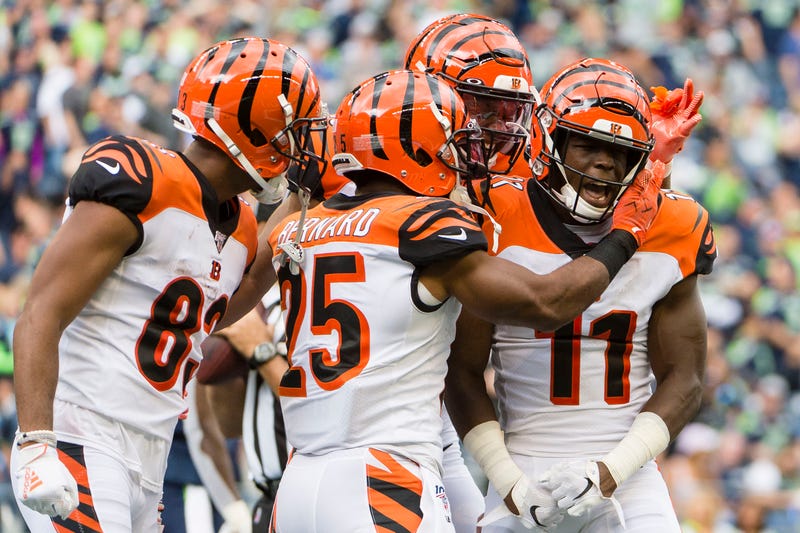 John Ross has had a strong start to the 2019 season. Photo credit (Troy Wayrynen/USA Today Images)

So far, Ross’s 2019 campaign looks eerily similar to DeSean Jackson’s start to 2018. He has 270 yards and three touchdowns, an almost-identical stat line to Jackson’s first two weeks last year. There is a major difference that looks more encouraging, though, as Ross has been targeted 20 times to Jackson’s nine. Perhaps Zac Taylor really has injected life into the Bengals offense, making this an optimal situation for Ross’s long-awaited breakout.

Another very real possibility, though, is that Andy Dalton and the Bengals will cool down after their impressive offensive showing. Dalton has started the year off with two 300-yard, two-touchdown performances: something he did twice in all of 2018, and not at all in 2017. It would be wrong to say that Zac Taylor isn’t making a difference, but Dalton has proven to be nothing more than a league-average quarterback.

AJ Green’s return is on the horizon somewhere in October, and Tyler Boyd remains the favorite and more trusted target in Cincinnati. A difficult matchup against Buffalo in Week 3 could show the first disappointment from Ross, but it may be better to classify it as a crash back down to reality rather than a disappointment going forward. If you can trade him for a legitimate WR1 or WR2, it’s the optimal time to do so.

Jackson has been taking the league by storm, showcasing his throwing ability in addition to his phenomenal mobility. What many thought would give him a low ceiling has been the exact area in which Jackson has excelled, as he is tied for the league lead in passing touchdowns (7) and is averaging about 300 passing yards and 60 rushing yards per contest. He’s outscoring even Patrick Mahomes in fantasy football, who hasn’t exactly gotten off to a slow start himself.

But if you look past the surface (you don’t have to dig deep), you’ll see that Jackson’s first two starts were against the Dolphins and the Cardinals. Simply put, he’s played against swiss cheese defenses that took two of the bottom three spots in USA Today’s defense rankings earlier this season. What’s even better is that you should enjoy his services for another week as a matchup with the Chiefs promises continued production. His value will be through the roof. Heck, he may even be an MVP candidate.

But someone who really wants a player like that will be willing to give up a ton in return, and quarterback is undoubtedly the deepest and most replaceable position on every fantasy football roster. With back-to-back tough matchups in Week 4 and 5 (Cleveland and Pittsburgh), his value may lower significantly. It may be harder to get rid of him with the recent injuries to Drew Brees, Ben Roethlisberger, and Cam Newton, but if you have a guy like Josh Allen or Philip Rivers in reserve, it’s probably worth the move.

Others: Marquise Brown (WR 3), D.J. Chark (WR 5 - although lack of name recognition may not get you much in return), Raheem Mostert (RB 15)