The waiver wire in fantasy football is typically a place you look each week to find an option to potentially improve a weakness in your starting lineup, but after Week 1, you should take a different approach.

We are looking for players that not only popped in the opening week, but we are also looking for signs that player can have success in the weeks to come.
Ryan Fitzpatrick and Isiah Crowell were among the top-five at their position a year ago after Week 1. How’d they do the rest of the season.

These are the five waiver wire options for Week 2 among players rostered in fewer than 50 percent of leagues: 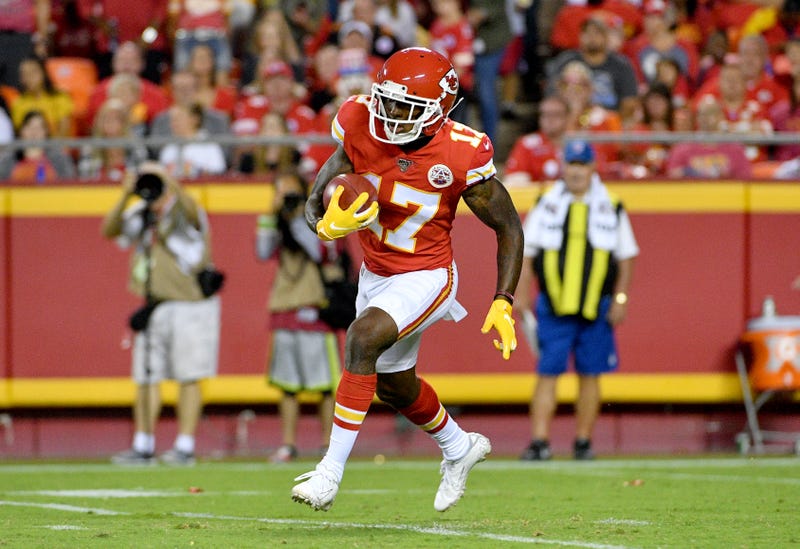 WR Mecole Hardman - Chiefs
Tyreek Hill (shoulder) is expected to miss a few weeks, and the rookie Hardman stepped right into the starting lineup with Hill sidelined. Hardman may not have had a reception against Jacksonville Week 1, but he played 53 of 59 snaps. You want to take chances on this Chiefs offense any way you can, and Hardman draw the Raiders defense in Week 2. 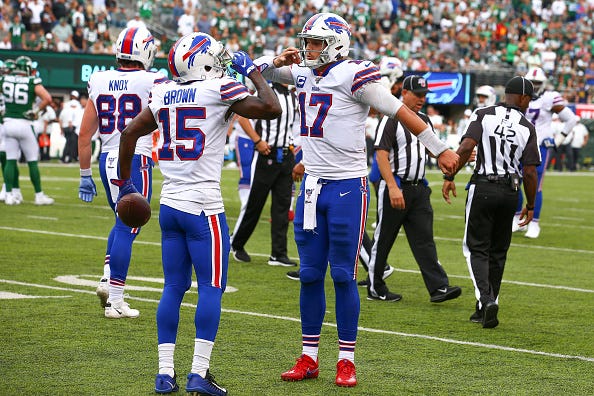 John Brown helped the Bills to a Week 1 victory over the Jets. Photo credit (Rich Graessle/Icon Sportswire via Getty Images)

WR John Brown - Bills
Brown was on our preseason list of players you should pick up before Week 1, and now it’s going to be tougher to get him. He posted seven receptions for 123 yards and the game-winning touchdown against the Jets on 10 targets in Week 1, a great fantasy line despite a low-scoring 17-16 final. Josh Allen’s huge arm strength is a perfect match for Brown, who will now get to face the Giants in Week 2, a defense that was just shredded for more than 400 passing yards and four touchdowns by the Cowboys. 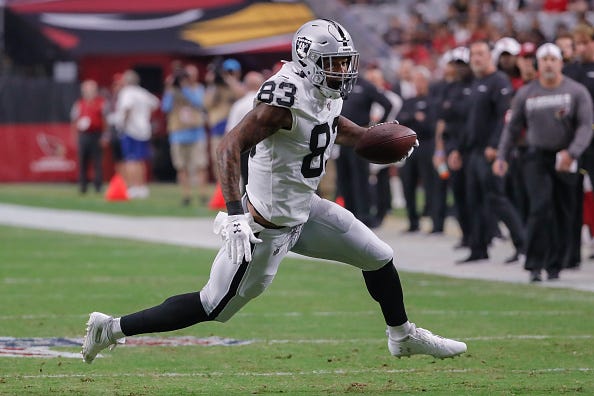 TE Darren Waller - Raiders
Antonio Brown is gone. Jared Cook is also gone, who was a fantasy TE1 in this offense a year ago. Waller remains, and he has a path to being the most targeted player in this offense, given Tyrell Williams, who has talent, is a downfield threat, and Derek Carr is more inclined to throw short-to-intermediate passes. Waller will see his ownership skyrocket after this week. 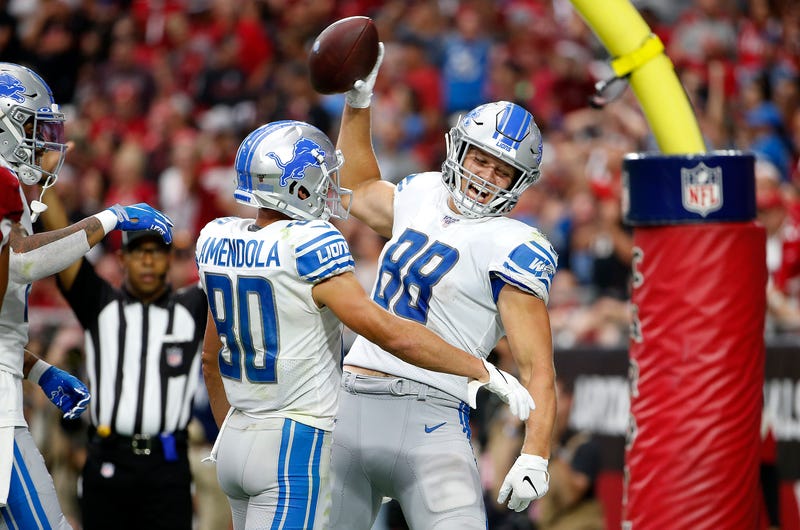 In his NFL debut, T.J. Hockenson had a big game for the Lions. Photo credit (Ralph Freso/Getty Images)

TE T.J. Hockenson - Lions
If you didn’t get one of the six big-name tight ends in your fantasy draft, you need to aggressively go get Hockenson if he’s available in your league. Reliable tight ends are simply hard to find, and a rookie tight end putting up six receptions for 131 yards and a touchdown on nine targets in his debut should get all of our attention. Watching the Lions-Cardinals game, it was clear some of those targets were designed plays to get Hockenson, a top-10 overall pick in the NFL Draft, the ball in space. 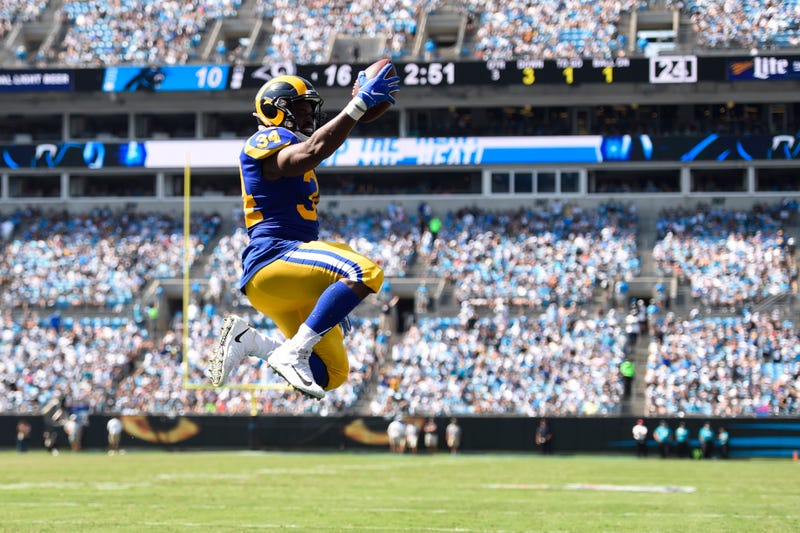 RB Malcolm Brown  - Rams
Malcolm Brown is the only running back owned in fewer than 50 percent of leagues that really pops out this week, as the preseason buzz on rookie Rams RB Darrell Henderson fizzled out Week 1, with Henderson playing all of two snaps. Brown played 21, showing he’s clearly the high-value handcuff to Todd Gurley at this point. Brown also scored twice. If he’s going to continue to get the work near the goal line, Brown could have standalone value, and obviously if Gurley’s knee issues were to cause him to miss games, Brown’s ceiling is a league winner. 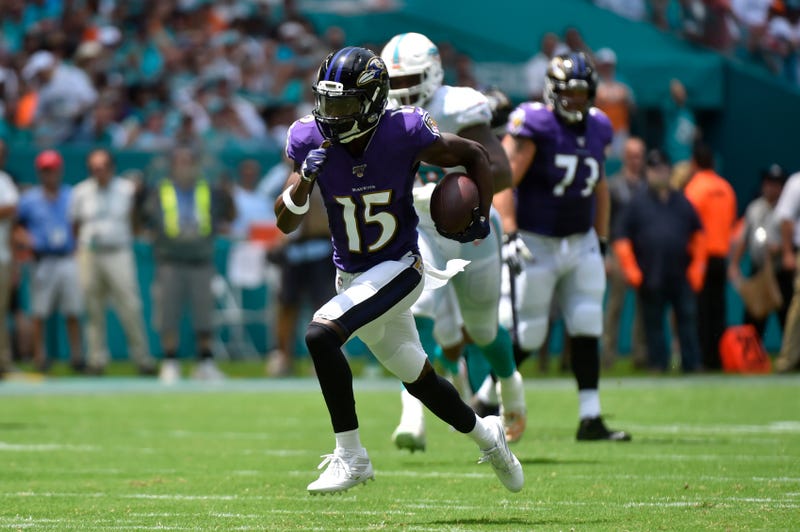 WR Marquise ‘Hollywood’ Brown - Ravens
Why isn’t the rookie higher on this list after becoming the first player in NFL history with two 40-yard+ touchdowns in his debut? Because it was against the Dolphins, who apparently aren’t trying to win games this season. Brown’s four receptions for 147 yards and 2 scores on only five targets were impressive, not to mention he did it on only 20 snaps; however, it’s best to take a wait and see approach moving forward before deploying him into your starting lineup. Definitely worth rostering, but let’s see if Brown’s playing time increases in the weeks to come.