If you like upsets, Week 10 must have been a fantastic football-watching experience. Seven of the 12 games on Sunday’s slate went in the direction of the underdog. Whereas some games were viewed as potential toss-ups, like the matchup between the Browns and the Bills, there were some upsets that completely blew the NFL universe’s collective mind. For instance, the 1-7 Falcons beat the 7-1 Saints, becoming just the fifth team in this decade to win when the spread against them was +14 or greater.

There were returns to look forward to, including that of Patrick Mahomes and Kareem Hunt, as well as notable injuries that completely changed the dynamic of the game, including Matthew Stafford’s late scratch against Chicago.

Here is a rundown of the major fantasy happenings as we get closer and closer to the fantasy football playoffs.

The most notable and surprising injury on this list occurred before the game began, as Stafford was a very late and unexpected scratch after doctors revealed that he has broken bones in his back. Stafford reportedly played through this injury last season, but there is controversy around how the team handled the publicity of his injury and just how late they reported his unavailability. For fantasy purposes, his absence completely weakens the prospects of the rest of Detroit’s offense. Though Kenny Golladay had a decent fantasy day, a lot of it was due to a fluky hail mary, and Jeff Driskell just can’t be trusted to lead this offense to much success.

Though Week 10 was certainly not a disappointment, nearly everything else about the Falcons’ 2019 season has been including Devonta Freeman. Freeman sprained his foot and will have an MRI to uncover the severity of the injury. If he’s out, the Falcons have a limited and unexciting running back corps which should be avoided in fantasy.

One of the players that certainly has not disappointed in Atlanta this season is fantasy football’s number one tight end. However, Hooper’s injury puts a damper on Sunday’s big win, and he’s expected to miss some time after an MRI determines the seriousness of the injury.

The Lions’ replacement for Kerryon Johnson suffered a concussion, and Johnson’s absence means that J.D. McKissic and Paul Perkins will split the carries. Overall, this is a backfield situation that should be avoided.

The man taken most popularly at first overall may have to miss some more time this season after suffering an ankle sprain earlier in the year. It was another ankle injury that sidelined Barkley in a disappointing showing against the Jets, but more on that performance later. The bye week is coming at the right time for the Giants as they evaluate how they should deal with Barkley’s injury. 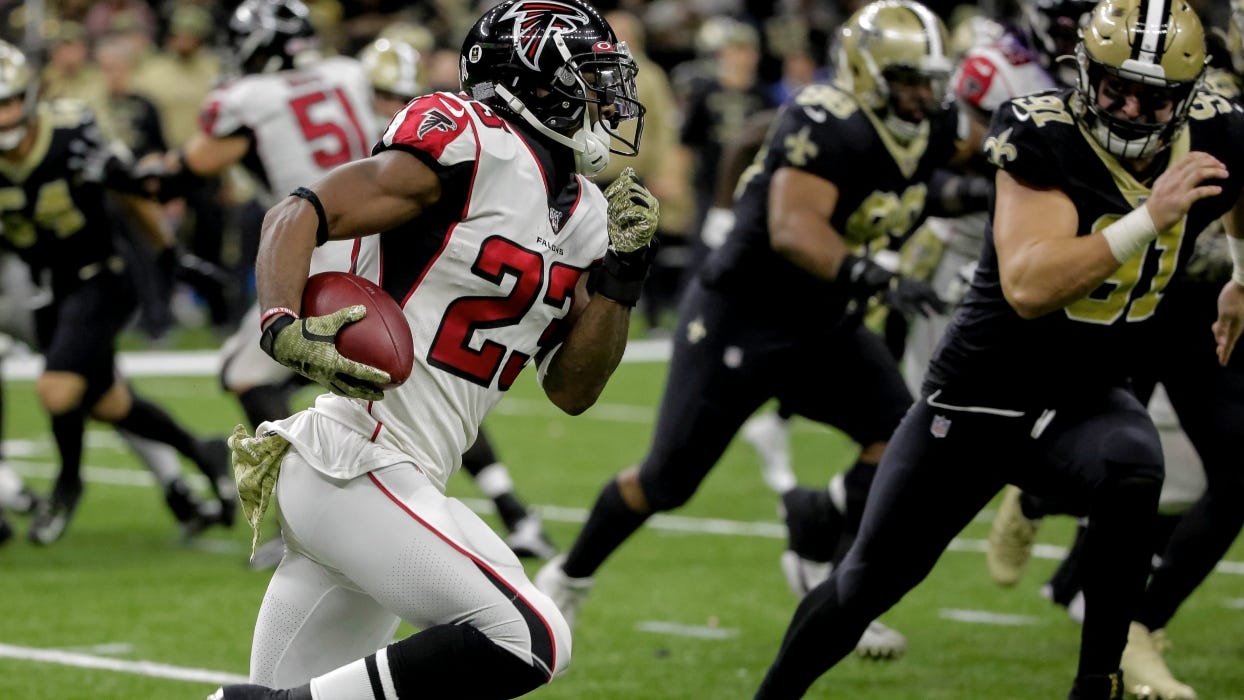 Aaron Jones is a touchdown machine

It may have been a bit of a stretch for Aaron Rodgers to question whether or not Jones is an MVP candidate, but one thing is for sure: Jones can find the endzone with the best of them. He has 14 touchdowns in 10 games on the season, putting him on pace to score 22 times (Todd Gurley led the NFL last season with 21). While this may be an unrealistic expectation, Matt LaFleur knows who he wants with the ball in the red zone. Jones has 30 red zone touches on the season, which nearly doubles the next highest (Jamaal Williams, 16 touches).

Though his mobility wasn’t on full display, Mahomes casually threw for a season-high 446 yards on 50 attempts, also a season-high. Throwing the ball 50 times with your quarterback the week he comes back from an extended absence is a good sign that they aren’t worried about his status, and though they’ll surely be careful with their QB, the Chiefs are a high-volume fantasy offense the rest of the year with Mahomes at the helm.

Daniel Jones is the real deal

Danny Dimes threw four touchdowns for the second time in three weeks, and is trusted with running this offense. Many doubted the Giants at the time of the draft, but there doesn’t seem to be too much concern revolving around Jones’s assimilation into the NFL.

The league may be catching up to Sean McVay

It’s easy to jump to conclusions, but after an incredibly fast start to his NFL career, things are sputtering a bit this season for McVay’s rams. Todd Gurley seems to play well more often than not, but in a limited capacity, so there are still lingering concerns with his health. More importantly for fantasy, though, is the maddening inconsistency of Jared Goff and the consequent performance of the receiving corps. Goff’s passer rating is an 82.7 so far, which trails Mitchell Trubisky, Kyle Allen, and Joe Flacco among others.  Losing to the Mason Rudolph-led Steelers was a shock this weekend, and the Rams may not be a playoff team despite their major acquisition of Jalen Ramsey and the arsenal of offensive weapons at their disposal.

Just two weeks prior to this one, Jones had a four-touchdown effort, and he’s only the fourth quarterback in this decade to throw for four touchdowns twice in his rookie season. It came as more of a surprise this time around as both Sterling Shepard and Evan Engram were out. Luckily, Darius Slayton decided to pick up the slack en route to a 10-catch, 121 yard, and two score performance after recording just one catch for six yards the week before.

Playing against the Buccaneers always means that there is shootout potential, and we got one in Week 10. The biggest fantasy beneficiary of this was Christian Kirk, who exploded for a trio of touchdowns. Three touchdowns is always a surprise, but it was especially unexpected coming from a player who had scored a grand total of zero coming into this game. He and Kyler Murray are developing their chemistry, which should be fun to watch for the rest of the season. Unfortunately, that chemistry may have to be put on hold for a week as the vaunted 49ers secondary will stand in the way for Week 11.

13 carries for one yard. Not much more needs to be said. But let’s say some more anyway. This effort came against a miserable Jets defense in a game where Daniel Jones threw for four scores. The fact that Barkley couldn’t find the end zone, could barely muster positive yardage, and came out of the game with an injury is crushing to those who invested a first overall pick on him. With his health a concern going forward, Barkley’s sophomore campaign has been an underwhelming one.

One week after his “breakout” game where he was given the rock 20 times (the same number of carries he had the entire season entering that game) and converted those touches for 95 yards and a touchdown, a juicy Week 10 matchup against the Browns promised even more. Instead, he carried the ball just eight times for 42 yards. It’s tough to predict what his usage will be going forward for an unreliable Bills team.

Michael Thomas was the only one to come out of this game with a good fantasy day, and boy what a day he had (13 catches, 152 yards). But for those that drafted Alvin Kamara, seeing four carries throughout a whole game is a nightmare. The eight catches were respectable, but he has only given owners first-round value on a couple of games this season. Those who hoped his reunion with Brees would spark some fantasy excellence will have to wait another week.

Cooper Kupp was the No. 2 receiver in fantasy in the first half of the season. The bye week in Week 9 moved him down the rankings slightly to no fault of his own. But no one in Week 10 could have seen a zero-catch performance coming. Goff targeted him four times, but to no avail, and more importantly, the Rams lost a really disappointing game to the Steelers. 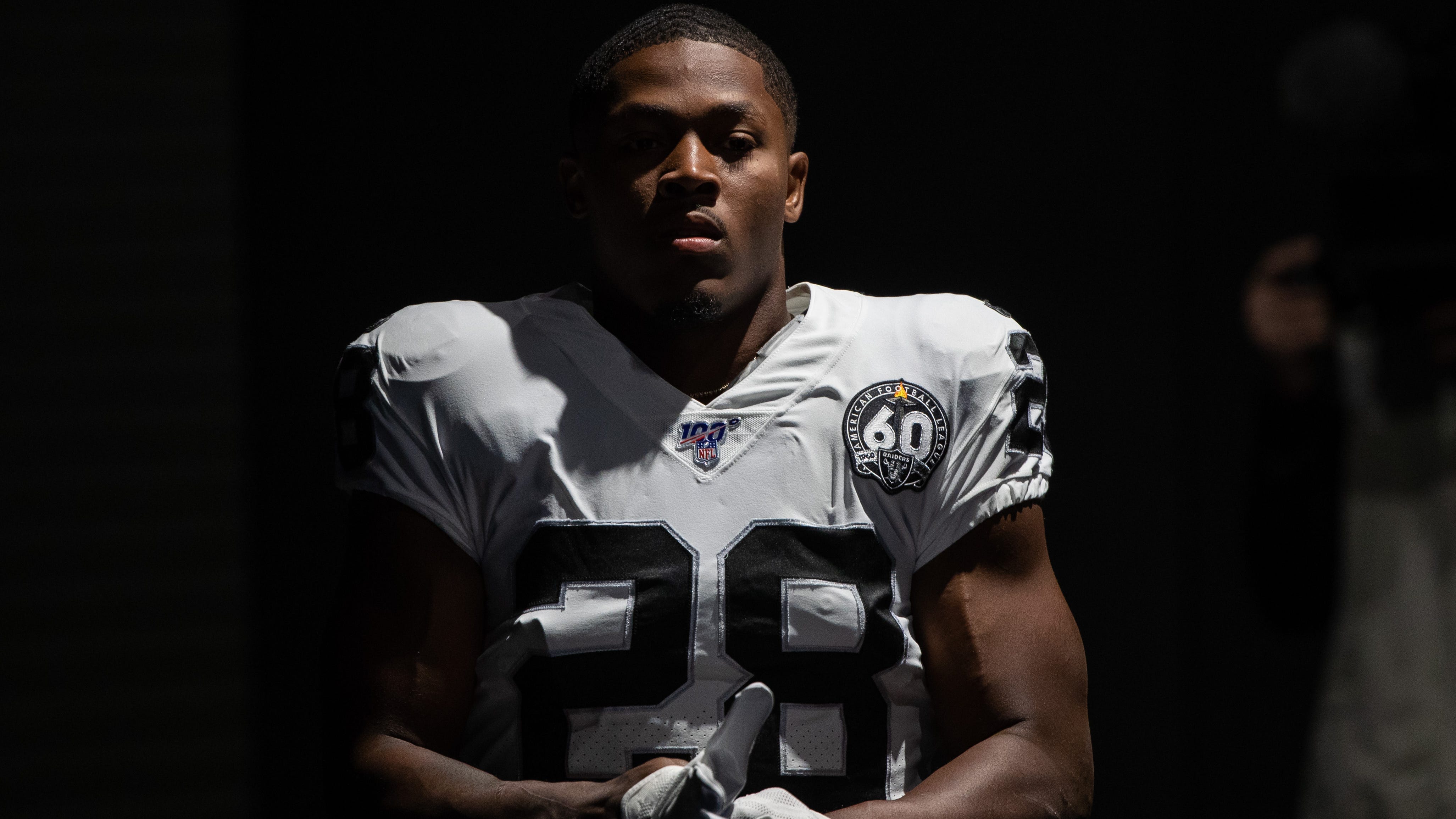 Fantasy Football: Which Teams Are Projected to Score Most in Week 11?

Breakout of the Year: Lamar Jackson

Bust of the Year: AJ Green*

It’s tough to label a guy a bust that hasn’t played. But as his return is delayed again and again and again, fantasy owners who used a fifth or sixth round pick on Green are starting to get impatient. Even worse? His quarterback may be Ryan Finley the rest of the season depending on what Zac Taylor wants to do.