Earlier this month, two-time All-Pro wide receiver Andre Johnson told Houston Texans quarterback Deshaun Watson to "hold his ground," adding that the franchise that he spent the bulk of his Hall of Fame-caliber career with is "known for wasting players' careers."

Apparently, Johnson isn't the only franchise icon that feels this way.

In addition to Johnson and DeAndre Hopkins, Arian Foster, the leading rusher in franchise history, spoke openly about the troubles that the Texans have had in finding stability since entering the NFL as an expansion team in 2002. Perhaps more troubling is that Foster, who rushed for 6,472 yards with the Texans, seemed to suggest that the Texans treated star players so poorly, that it almost made you indifferent to the success of the franchise.

"I do know that the organization had their troubles bringing in free agents, which I never really understood," Foster said on The Gems and Juice Podcast. "They have their struggles in communicating with players. I've always thought this about the NFL in general, but my experience with Houston is that they really didn't give a f--k about how you felt and what you said. It was like 'you do what we say.' And that's another variable as to why I was like disassociated from the wins and losses s--t. It was like, ya'll don't give a f--k about my input. Maybe three coaches - tops - played at that level, [the others] just [have] been around the game. And so how the f--k can you not have input from people doing it at a high level, who are in it? I never understood that s--t. And so once you realize that you're just a chess piece, then for me, it was just like, 'alright, I'm just going to do what I can...I'm gonna play hard...do my thing...take care of my dues...but I'm here for a purpose.'"

After promising to involve Watson in the search for the team's new general manager and head coach, owner Cal McNair and executive vice president of football operations Jack Easterby seemingly didn't do that in hiring Nick Caserio to lead the front office. Initially, the Texans didn't interview Kansas City Chiefs offensive coordinator Eric Bieniemy for their head coaching vacancy, though public backlash has since led to them doing so. However, there's evidence that the Texans never interviewed former San Francisco 49ers defensive coordinator Robert Saleh - recommended by Watson, like Bieniemy - before he was hired by the New York Jets as their new head coach.

Even if Bieniemy is ultimately offered the job, it may be too little too late to save the relationship with Watson, who is universally viewed as one of the top five quarterbacks in the NFL. ESPN's Chris Mortensen reported Sunday that regardless of who is hired to be the next head coach for the Texans, Watson is "still expected to want out of Houston."

The ironic part here is that there seemed to be an awareness from the organization at the outset of the offseason that they haven't done a good enough job making their star players feel like their opinions are valued. However, promising to involve Watson in the search for both general manager and head coach, and at least initially ignoring him may be actually prove to be a worse decision than just leaving him out of the process altogether from the get-go.

Over the weekend, Armando Salguero of The Miami Herald reported that Watson's ideal landing spot in a trade would be the Jets, in large part because they hired Saleh. 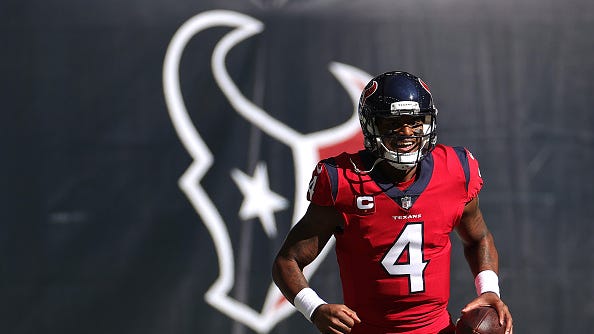