As Week 8 wraps up, it officially marks the mid-way point of the 2019 NFL season.

This season has had plenty we expected (the Patriots are still the best team in the league, the Dolphins are not), but also plenty of surprises (an undefeated San Francisco 49ers team). There has been everything from officiating controversies to injuries to notable players, the latter allowing others to get the chance they have been wait for (Teddy Bridgewater).

While there is still lots of football left, and things can change rather rapidly in this league, many players and teams are already putting their stamp on the 2019 season, good or bad. As we flip the page to the second half of the season, here is RADIO.COM's NFL midseason awards:

There are plenty of MVP candidates to choose from, but the Seattle Seahawks quarterback may just be the best of them as he puts together what is shaping up to be the best season of his career. Through the first eight weeks, Wilson leads all NFL quarterbacks with 17 touchdown passes and has thrown just one interception, giving him the best TD-INT ratio of any QB. Wilson has three rushing TDs and 182 rushing yards, but most importantly, he has the Seahawks at 6-2 in the NFC West, trailing the undefeated San Francisco 49ers in the division.

Rookie of the Year: Nick Bosa

The San Francisco 49ers defensive end is proving exactly why he was chosen with the second overall pick in the draft. Bosa shares the league lead in tackles for losses with Rams’ Aaron Donald at 11, and has seven sacks — seventh-best in the NFL and tied for the most among rookies. He also has an interception, a forced fumble and 13 QB hits in addition to his 36 tackles. Bosa may even be in the running for Defensive Player of the Year if he continues on this pace. Regardless of what accolades he may receive, he has been a major reason for why the 49ers defense is among the league’s best and why the team stands at 7-0 through Week 8. 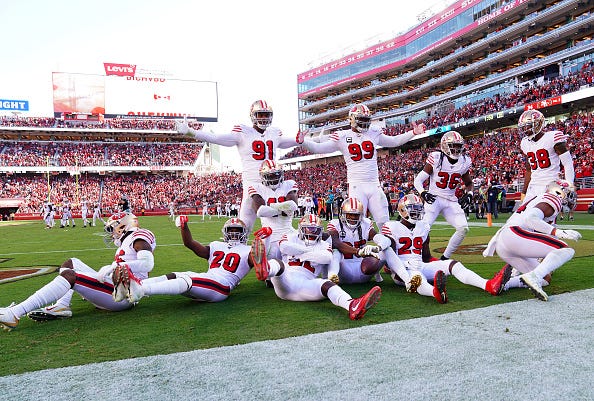 Raise your hand if you thought the San Francisco 49ers would be one of two undefeated teams through the mid-way point of the season. Didn’t think so. After a 4-12 2018 campaign in which the 49ers lost quarterback Jimmy Garappolo for the season, the Niners had shocked many with how quickly they have turned the tide. Head coach Kyle Shanahan has mastered a balanced offensive attack, but it is the Niners defense that has been the true story of this team. They are second in the NFL in fewest points allowed, first in fewest yards allowed and boast one of the best pass rushes with 27 sacks.

(we really put all his best jukes in a video 😂) pic.twitter.com/Q3x3WGEevo

The Baltimore Ravens quarterback showed flashes as a rookie last season, but he did it more with his legs and questions remained if he could be a legitimate pocket passer. Now, he’s doing it with both, drawing comparisons to Michael Vick and making the Baltimore Ravens’ offense one of the toughest in the league as he plays himself into the MVP conversation. Jackson has already surpassed his passing yardage from last season in the same amount of games, throwing for 1,650 yards and 11 TDs. He also has 576 rushing yards and three rushing TDs, including six rushes of 20 yards or more — tied for the best in the league. 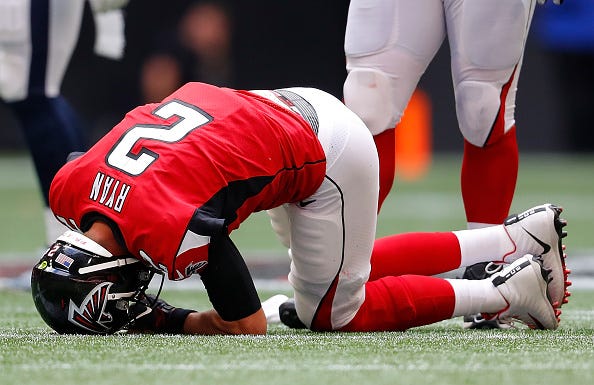 The Atlanta Falcons actually have a top-10 offense behind Matt Ryan, Julio Jones and Devonta Freeman, yet they hit the halfway mark at 1-7 and things are not looking up. Ryan is battling an ankle injury, Freeman tried to fight Aaron Donald and head coach Dan Quinn may not make it out of the team’s Week 9 bye. The defense has allowed an average of 31.3 points per game — second-worst in the league — and have forced just four turnovers all season. Only the winless and intentionally tanking Miami Dolphins are worse. 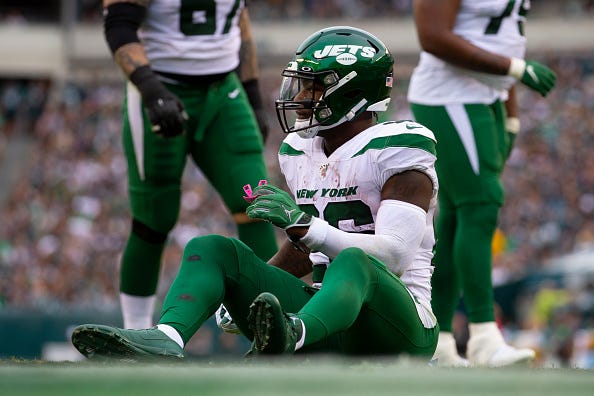 For all the drama with his holdout last year, Le’Veon Bell has not looked like the same player with the New York Jets as he was with the Pittsburgh Steelers. Sure, he’s played most of the season without his starting quarterback and behind a suspect offensive line, but Bell has yet to provide any sort of boost to the offense. He has accumulated 100 yards from scrimmage just once this season, and has not had more than 70 yards rushing in a game. He has just two TDs and in Week 8 against Jacksonville, he rushed the ball just nine times as the Jets do not appear to be utilizing Bell to his potential the way the Steelers did.