As we enter the final quarter of the 2019 NFL season, there are two teams in the AFC - the Baltimore Ravens and New England Patriots - that have a realistic path to potentially securing the top overall seed in the conference and home-field advantage throughout the postseason. In the NFC, at least four teams - the New Orleans Saints, Seattle Seahawks, San Francisco 49ers and Green Bay Packers - can make that same claim.

For as vital as a first-round bye and home-field advantage can be, it would take a meltdown for any of those six teams to miss the postseason altogether. The same can probably be said for the 9-3 Buffalo Bills. That said, over a quarter of the league is on the postseason bubble.

Ahead of Week 14, here's a look at whether the nine teams that have a legitimate path to the postseason will ultimately be successful in their quest: 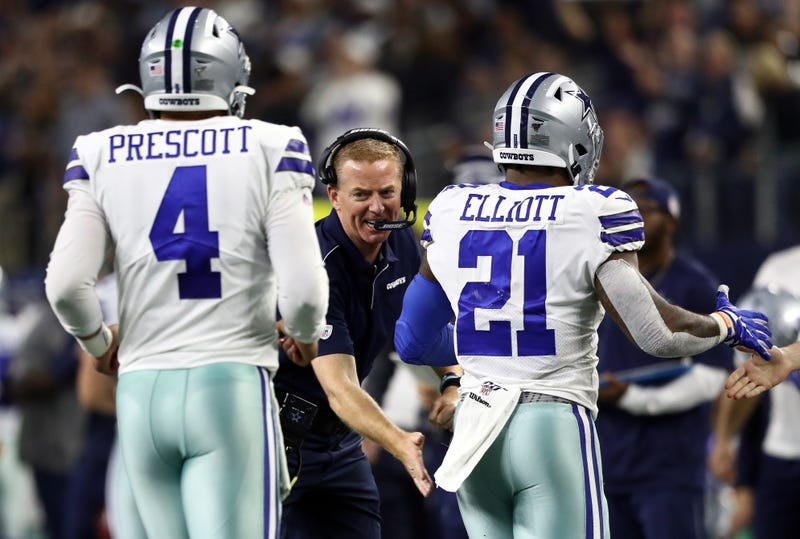 The rest of the Cowboys' schedule isn't a cake walk, but considering they enter Week 14 having already defeated the Philadelphia Eagles once and a game ahead of them in the NFC East, they seem likely to become the first repeat winner in the division in the division in 15 years.

Dak Prescott and company will play in Chicago on Thursday Night Football in Week 14, before returning home to host the 7-5 Los Angeles Rams in Week 15. The most crucial game on their schedule is a Week 16 trip to Lincoln Financial Field, which may ultimately decide the NFC East. Even understanding the importance of their Week 16 tilt with the Eagles, the Cowboys will have the cushion of a home game in Week 17 against the 3-9 Washington Redskins to fall back on.

If the Cowboys can win three of their last four games - especially if one of those three is against the Eagles in Week 16 - they'll almost certainly win the NFC East. It feels unlikely that a Wild Card Weekend appearance will be enough to save Jason Garrett's job, though. 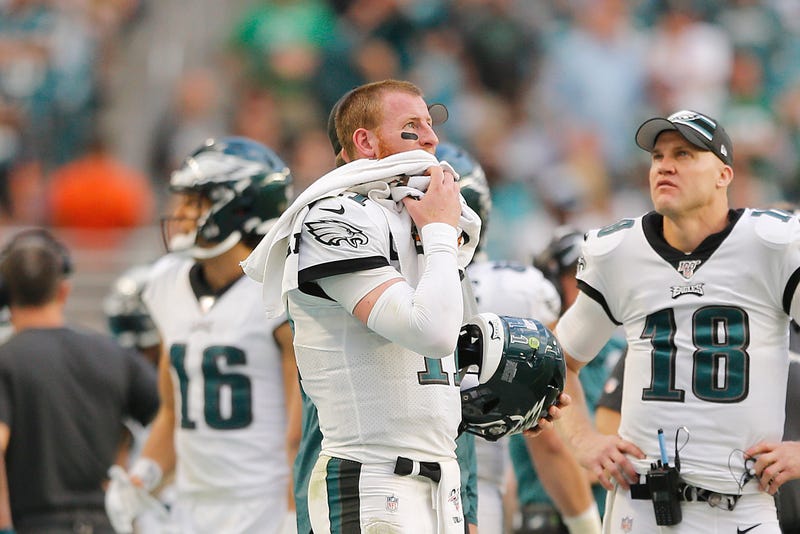 Carson Wentz and the Eagles have had a disappointing 2019 season. Photo credit (Michael Reaves/Getty Images)

After Carson Wentz - with an already-thin offense missing some key contributors - struggled against the New England Patriots and Seattle Seahawks, the Eagles' offense put up 31 points against the Dolphins. But their defense - which limited the Patriots and Seahawks to just 34 points combined - allowed 37 points.

Sometimes, even when a team's schedule looks favorable, the team just doesn't have it. That's how the 2019 Eagles feel.

After the Eagles play their Week 17 game in New Jersey against the Giants, it feels much more likely we'll be discussing changes to Doug Pederson's coaching staff, as opposed to a playoff game. 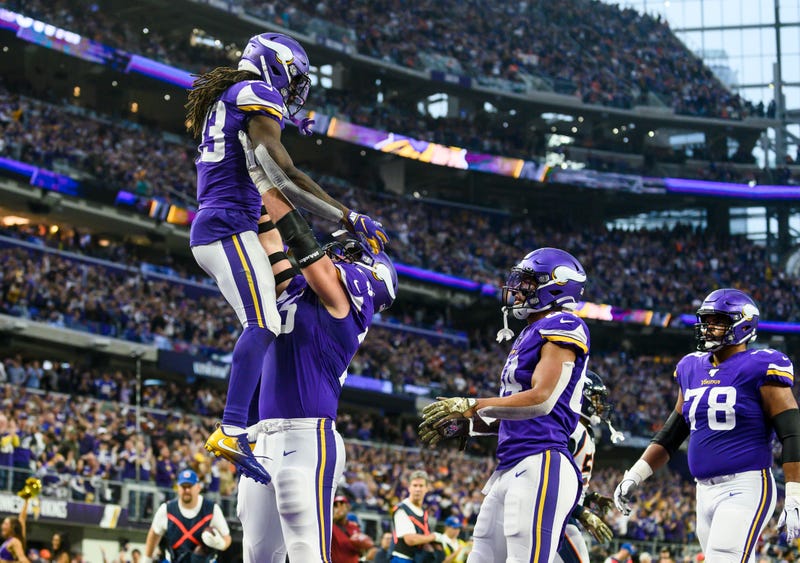 Dalvin Cook and the Vikings are in the driver's seat for a Wild Card position. Photo credit (Stephen Maturen/Getty Images)

To win the NFC North, the Vikings will certainly have to defeat the Packers at home in Week 16 and win out. But even if they lose that game, their other three remaining games are against the Detroit Lions, Los Angeles Chargers and Chicago Bears. If they win three of their final four games, that will put them at 11 wins and likely into the NFC playoffs.

Given the amount of talent on the Vikings' roster, an exit in the first round of the playoffs would feel like a disappointing outcome, especially if Kirk Cousins, in the midst of a career year, struggles. It would be even tougher to swallow if said loss comes in Green Bay, which is a possibility. 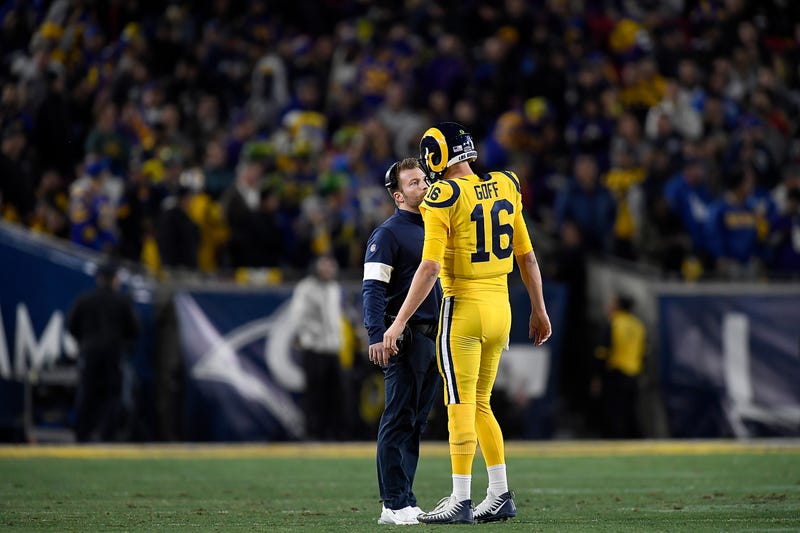 Can the Rams sneak into the playoffs? Photo credit (Kevork Djansezian/Getty Images)

Yes, the 7-5 Rams are just a game back of the Minnesota Vikings. No, they aren't likely to only be a game back of the second Wild Card spot in the NFC after their matchup with the 10-2 Seattle Seahawks on Sunday Night Football in Week 14.

Even if the Rams upset the Seahawks in Week 14, their next two matchups after that are in Dallas and San Francisco. By the time they reach their Week 17 matchup with the Arizona Cardinals, they may already be eliminated from postseason contention.

Though the Rams still control Jalen Ramsey in 2020 and are likely to attempt to reach a long-term deal with him, they traded two first-round picks during the 2019 season to acquire the All-Pro cornerback. If they walk away from that without even a playoff appearance, that would be a tough pill to swallow.

The Rams, as much as any team in the NFL, were built to win now. But Jared Goff has regressed after signing a four-year/$134 million extension. The Rams' rushing attack is just the 25th best, despite Todd Gurley being paid a pretty penny. And they don't have a first-round pick until 2022. 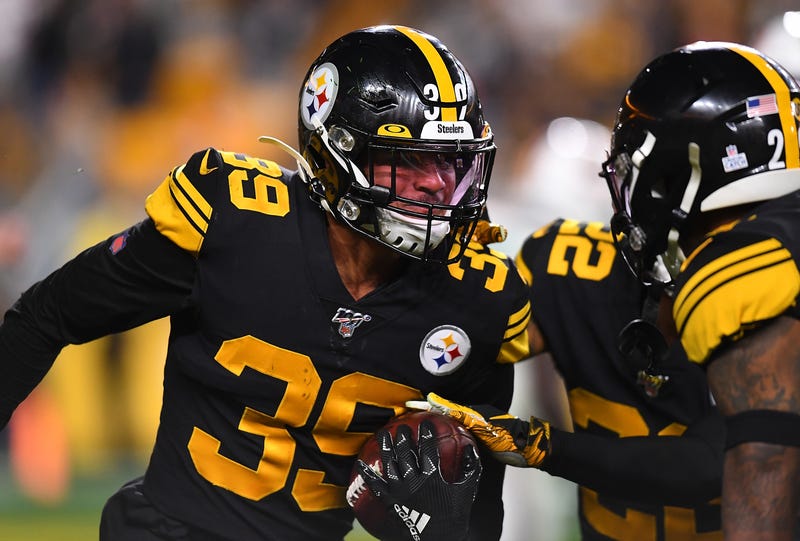 Despite the fact that the now-benched Mason Rudolph leads them in passing yards, the Steelers are 7-5, and appear to have the inside track to the final Wild Card spot in the AFC.

They do still have dates against the Buffalo Bills and Baltimore Ravens on their schedule, though the Ravens' game is in Week 17, so it's unclear whether Lamar Jackson and key starters will play the full game. The Steelers should be able to win their two remaining games, in Arizona and in New Jersey, against the Jets.

Their remaining schedule lines up more favorably than, say, the Tennessee Titans.

The in-season acquisition of Jalen Ramsey hasn't paid off from a team perspective the way that the Los Angeles Rams may have hoped, but that's not the case for Minkah Fitzpatrick with the Steelers. In 10 games with the team, Fitzpatrick has five interceptions, two fumble recoveries and a forced fumble. The Steelers' defense enters Week 14 as the fifth-rated unit in the NFL, and it may propel them to an unlikely postseason berth. 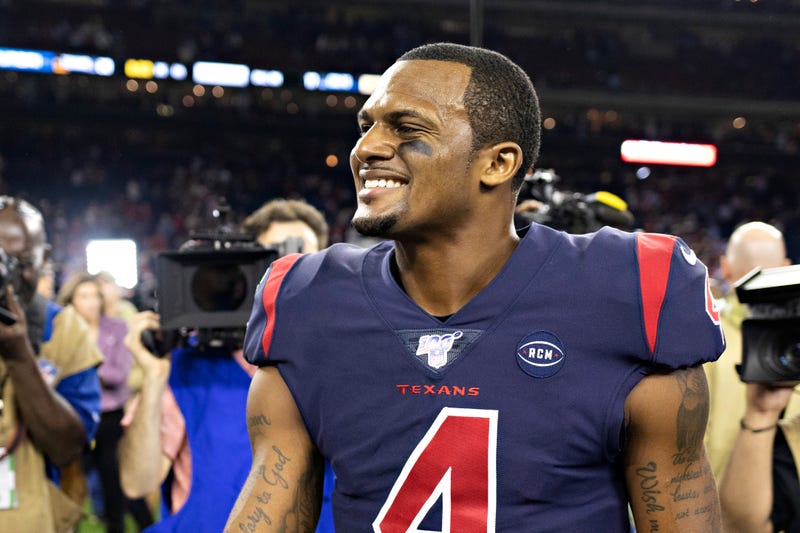 Deshaun Watson and the Texans are on track to play in the postseason. Photo credit (Wesley Hitt/Getty Images)

The Texans have rebounded from a blowout loss in Baltimore in Week 11 to win consecutive games against the Indianapolis Colts and New England Patriots. At 8-4, they're atop the AFC South and still have the second Wild Card spot in the AFC as a fall-back option.

The Texans have two remaining games against the division-rival Tennessee Titans, and unless they lose both of those games, they'll almost certainly play in the postseason, probably as the AFC South Champions. Their other two games are at home against Denver in Week 14 and in Tampa Bay in Week 16.

It's hard to get the bad taste out of your mouth from their 41-7 loss to the Ravens, but a win over New England makes you think that Deshaun Watson and company could win at least one playoff game, if not more. 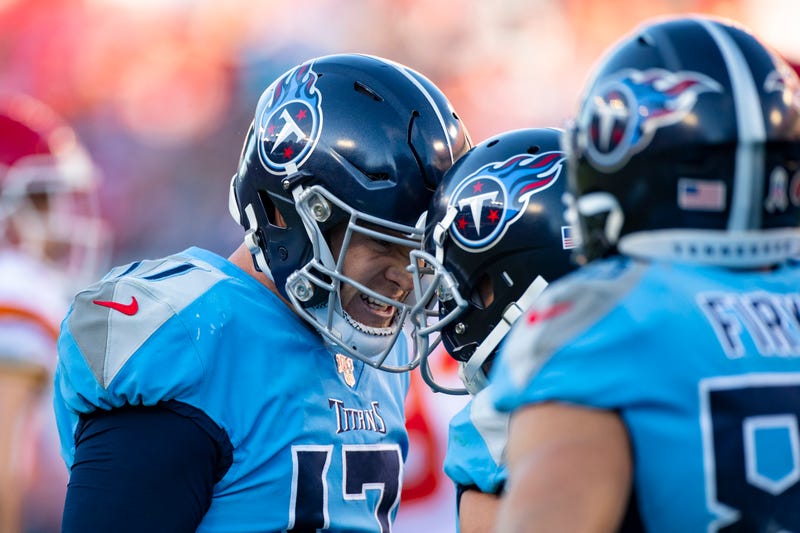 Ryan Tannehill has had success at quarterback for the Titans. Photo credit (Brett Carlsen/Getty Images)

The initial inclination here was that the Titans were the best bet to win the final Wild Card spot in the AFC. But their four remaining games - a game in Oakland, two games against the Houston Texans and at home against the New Orleans Saints - will likely prevent that.

Frankly, it may be more likely that the Texans win the AFC South than sneaking in as the final Wild Card team in the AFC. They're a game back of the Texans in the AFC South and will see the Texans twice before the end of the season. It's fair to wonder how likely it is that the Titans usurp the Texans, who are coming off of a statement win over the New England Patriots.

Beyond competing for a playoff spot, the final four games of the season may determine whether the Titans move forward with Ryan Tannehill as their starting quarterback. The former first-round pick has gone 5-1 in six starts in 2019, while throwing 12 touchdowns to just four interceptions. He can become a free agent at the conclusion of the season. 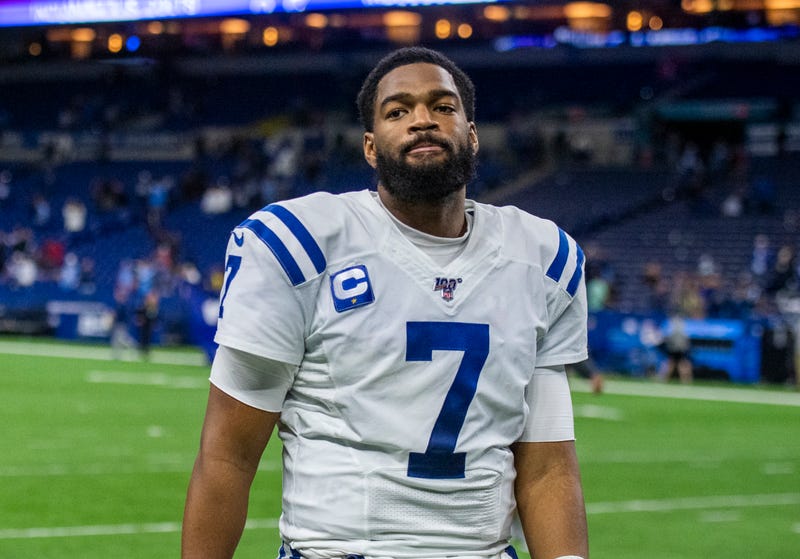 The Colts have been hit hard by injuries. Photo credit (Bobby Ellis/Getty Images)

Injuries to Jacoby Brissett and T.Y. Hilton, among others, have led to the Colts losing four of their last five games after starting 5-2. It now appears that they'll altogether miss the postseason.

Not only do the Colts trail the Houston Texans by two games in the AFC South, but the 7-5 Tennessee Titans have leapfrogged them in both the AFC South and the race for the final Wild Card spot in the conference.

Though he's struggled recently, Brissett has largely done and admirable job as the team's starting quarterback in 2019 and will probably return in that role next season, even if the Colts draft another option. But we'll always wonder what the 2019 Colts would have looked like with a healthy Andrew Luck under center. 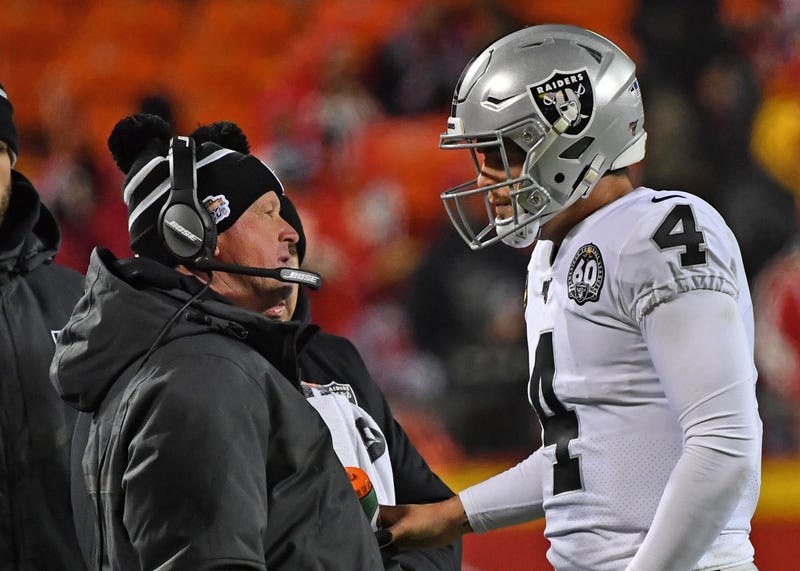 The Raiders have been blown out in consecutive games. Photo credit (Peter Aiken/Getty Images)

After an improbable 6-4 start to the 2019 season, the Raiders have been outscored 74-12 over the past two weeks. Following a 40-9 loss to the Kansas City Chiefs, they're two games back in the AFC West. And with the way they've played over the past two weeks, it's hard to imagine them claiming the final AFC Wild Card spot.

It is a shame that in their final season in Oakland - home of one of the NFL's most ferocious fanbases - it appears that the Raiders are running out of gas down the stretch.