Joe Burrow - taken No. 1 overall by the Cincinnati Bengals - led a round one of the 2020 NFL Draft that was without a ton of surprises. Perhaps Jordan Love ending up in Green Bay was a bit jarring, but many expected him to be a first-round pick. Only new Las Vegas Raiders' cornerback Damon Arnette and Seattle Seahawks' linebacker Jordyn Brooks felt like picks that came out of left field.

Even with the first round going as planned in many senses, a Heisman Trophy finalist, a 2,000-yard rusher and two decorated safeties remain on the board at the outset of round two.

Here's a breakdown of some of the most notable day-two NFL Draft prospects, and where they may fit: 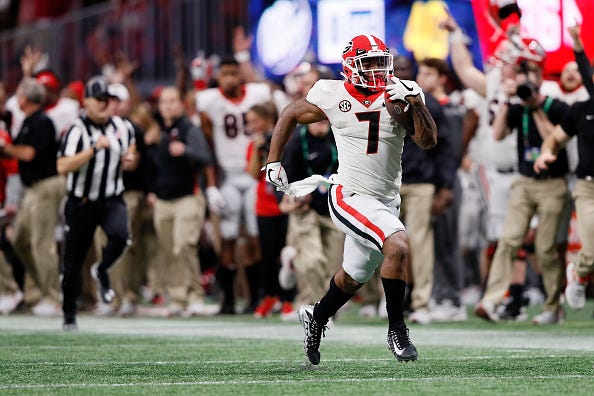 D'Andre Swift grew up in Philadelphia, and it shows when you watch him run - there's definitely some LeSean McCoy influence in his game.

Swift averaged 6.6 yards per carry during three seasons with the Georgia Bulldogs, with his best individual season coming in 2019, when he ran for 1,218 yards. Additionally, like McCoy, Swift projects as a strong pass catching option in the NFL as well. It's also worth noting that he had less than 450 total carries during his three seasons at Georgia, which should excite whatever NFL team he ends up on.

The Miami Dolphins own the seventh pick in the second round. Swift could be an interesting piece to pair with quarterback Tua Tagovailoa long-term. The Jacksonville Jaguars, Chicago Bears and Tampa Bay Buccaneers are all teams that could consider Swift in the first half of the second round. 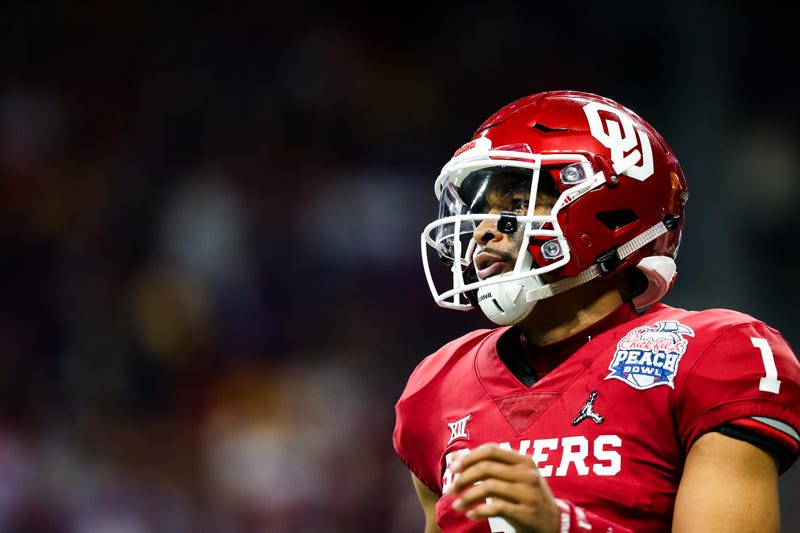 Hurts had a roller coaster of a college career, one that started at Alabama and finished at Oklahoma after Tua Tagovailoa ultimately seized the team's starting quarterback job. As it turns out, getting the chance to play under Lincoln Riley was a tremendous development for Hurts' career.

In his senior season, Hurts tossed 32 touchdowns and racked up 3,851 yards for a Sooners team that went 12-2. What's more, Hurts continued to be a tremendous weapon on the ground, as he rushed for 1,298 yards. Though he wasn't able to become the third consecutive Oklahoma quarterback to win the Heisman Trophy, he did finish runner up to eventual No. 1 overall pick Joe Burrow after putting together one of the most impressive statistical season from a quarterback in recent memory.

Unlike his predecessors - Baker Mayfield and Kyler Murray - Hurts isn't ready to start under center right away. That said, he's such a gifted athlete and while he learns under a veteran quarterback, he could certainly play a gadget-type role on a contending team's offense.

The Pittsburgh Steelers, who own the 49th overall pick, could be an interesting landing spot. Hurts could learn behind future Hall of Famer Ben Roethlisberger, who is under contract through the 2021 season. If last season showed anything, the Steelers' long-term replacement for Roethlisberger doesn't appear to be on their roster.

It's especially interesting to think of Hurts working under Bill Belichick and Josh McDaniels in New England as well. The Patriots own seven picks between rounds two and four, so they could take a flier on Hurts at some point this weekend, even if they are more intrigued by him as an athlete than a quarterback. 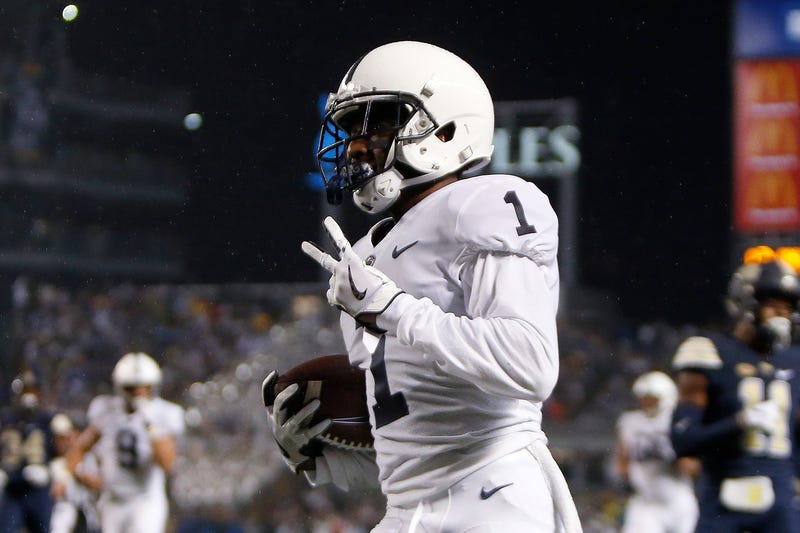 After a redshirt year, Hamler only played two seasons in Happy Valley. However, he made every second at Penn State count.

In a pair of seasons with the Nittany Lions, Hamler caught 98 passes for 1,658 yards. The 20-year-old has the potential to stretch the field at the NFL level, as he averaged 16.9 yards per reception in college. Indeed, Benjamin Solak of The Draft Network says the comp for Hamler is Brandin Cooks, who has displayed game-breaking athleticism wherever he's played.

A scary comp comes from Lance Zierlein of NFL Network, who says Hamler reminds him of Tavon Austin. Austin - who the Rams selected with the No. 8 overall pick in the 2013 NFL Draft - is one of the best athletes that's played in the NFL in the last 20 years. That hasn't consistently translated to him being a great wide receiver. Zierlein says Hamler needs to make strides in terms of route running and consistently catching the ball, but acknowledges that teams will always be willing to bet on world-class athleticism.

The New York Jets, who used the No. 11 pick on offensive tackle Mekhi Becton, could make sense as a fit for Hamler as they look to replace Robby Anderson. After the Green Bay Packers spent their first-round pick on Aaron Rodgers' potential successor, the future Hall of Famer probably wouldn't mind the Packers adding such a talented athlete to their offense. The New England Patriots have a bounty of picks in the next few rounds, although they may be looking for more of a finished product. 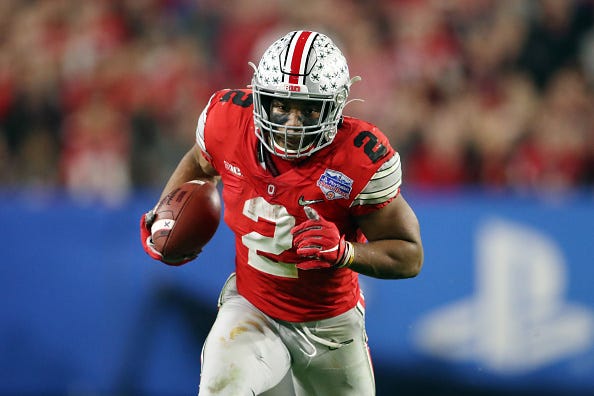 Dobbins is part of the slew of running backs that figure to be selected during the inevitable run on running backs in the second round of the NFL Draft.

Though it's mildly concerning that he carried the ball over 300 times in his junior season with the Buckeyes, focusing on that feels like burying the lede when you consider that he ran for 2,003 yards and 21 touchdowns.

Kyle Crabbs of The Draft Network does say that Dobbins has room to grow as a route runner, but also believes that the 21-year-old is a "scheme-transcendent back with a bright future" that reminds him of Las Vegas Raiders' star Josh Jacobs. Yeah, that player might be worth a second-round selection.

Of the remaining running backs, it's hard to know where teams feel Dobbins falls in the hierarchy of prospects, especially after the mild surprise that was Edwards-Helaire sneaking into the first round. He's going to go somewhere in the first round, and the Tampa Bay Buccaneers, Miami Dolphins and Buffalo Bills could all be potential landing spots. 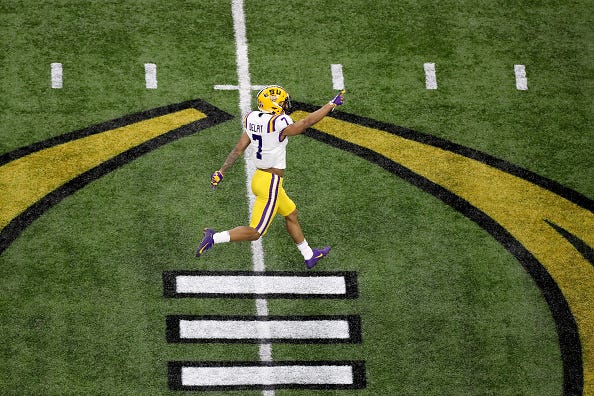 There were five players from the defending National Champion LSU Tigers selected in the first round of the NFL Draft Thursday night. Despite winning the Jim Thorpe Award and being named a consensus All-American in each of the past two seasons, Grant Delpit wasn't one of them.

In a way, Delpit shouldn't feel badly - there wasn't a single safety taken in round one. However, he once appeared to be a lock to go in the first round - and probably pretty high in the first round. Instead, evaluators soured on him to a degree, with NFL.com's Lance Zierlein citing a regression in pass coverage and continued concerns about his ability to wrap up tackles as reasons why Delpit isn't viewed as highly as he was even six months ago.

Still, this is one of the most accomplished college safeties to enter the draft in some time. You have to think that there's a team that viewed him as one of the elite prospects in the 2020 class heading into the 2019 season, and in round two will be more than happy to hope he can make that a reality at the NFL level.

The Chicago Bears, Cleveland Browns, Dallas Cowboys, Philadelphia Eagles and Las Vegas Raiders could all be potential landing spots in round two. 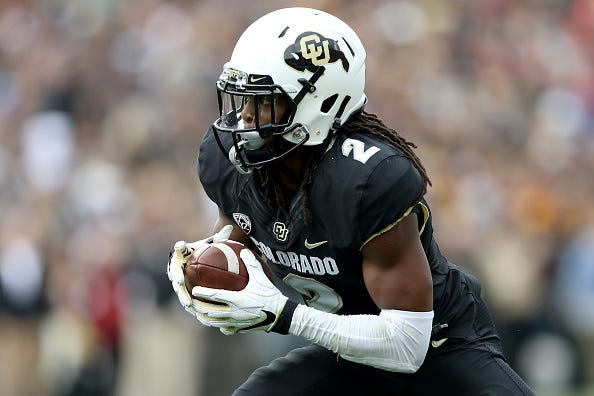 Jordan Reid of The Draft Networked described Laviska Shenault as "the type of swiss army knife that creative offensive coordinators will love to add to their list of weapons."

So how is he still on the board after round one? Hint: it's not because he doesn't possess round-one talent.

However, the former Colorado wideout had core muscle surgery after a disappointing showing at the NFL Combine. That injury in itself is rather route in NFL circles, and Shenault's doctor says that he's completely recovered from it already. The issue is that the core muscle surgery was just the latest in a growing injury history for Shenault, who has had procedures to fix a torn labrum and turf toe.

In what's believed to be one of the deepest wide receiving classes in NFL Draft history, concerns about Shenault's durability are why he's fallen into the second round. However, the 21-year-old has over 1,000 receiving yards in just nine games in his sophomore season of 2018. If he can stay on the field, he's going to be a really good pro.

It's hard to know exactly how wary teams will be of Shenault's health history, but he feels like the type of piece that will fall to someone like Sean Payton, Josh McDaniels or Matt LaFleur and end up becoming a star. 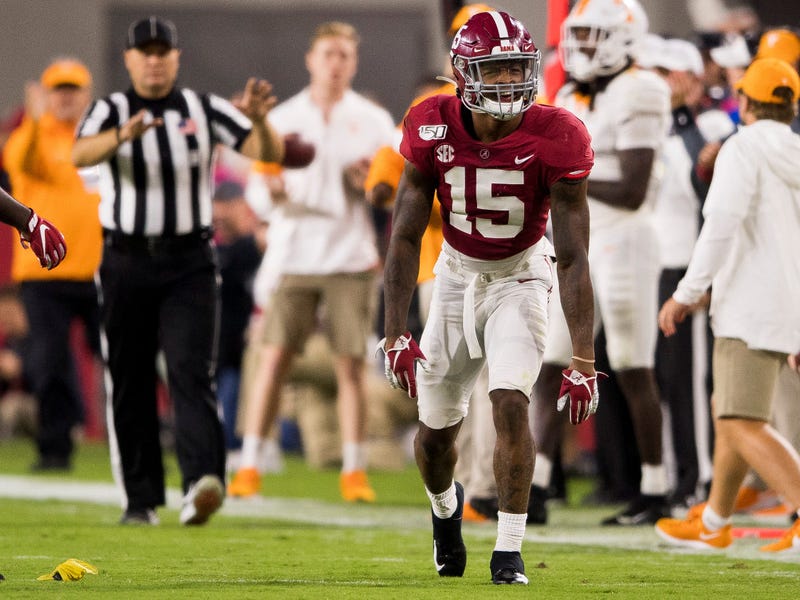 McKinney's fall into the second round was more surprising than that of Grant Delpit, but it again is worth reminding - no team selected a safety in the first round.

The Dallas Cowboys, who many thought were a natural fit for McKinney, had wide receiver CeeDee Lamb fall into their laps with the No. 17 pick. That's not McKinney's fault, and perhaps a sign that if he falls anywhere near Dallas' pick at No. 51, they could trade up.

McKinney was a First-Team All-SEC selection while playing for Nick Saban at Alabama in 2019. You get the feeling that a prospect that NFL.com's Lance Zierlein said has "high upside as an early starter" probably won't make it to the Cowboys' range given the amount of teams that could use safety help. The New York Giants - who own the fourth selection in round two - could be a team to watch.