Is there a chance that former Alabama quarterback Tua Tagovailoa falls in the 2020 NFL Draft because of injury concerns?

The feeling here is that's unlikely, and that whatever team ultimately drafts him may need to trade up to select him. However, when you consider that he had both ankles surgically repaired in college and dislocated his right hip last November, the possibility shouldn't be entirely discounted.

Imagine a scenario where the Miami Dolphins stay at pick No. 5 and select Oregon quarterback Justin Herbert, rather than Tagovailoa. The Los Angeles Chargers could select Tagovailoa and have him sit behind Tyrod Taylor for a season, but what if they are the anonymous team with a top-10 pick that RADIO.COM NFL Insider Michael Lombardi alluded to having failed Tagovailoa's physical? If Tagovailoa makes it past pick No. 6, all bets are off.

Maybe the Jacksonville Jaguars would use pick No. 9 to select Tagovailoa. Injury concerns - and what is seemingly an earnest belief in Gardner Minshew, at least to some degree - may dissuade them, though. The Las Vegas Raiders might be in the same position with pick No. 12 - more willing to add around Derek Carr, knowing that if things don't work out in 2020, next year's draft class will likely include Clemson quarterback Trevor Lawrence and Ohio State quarterback Justin Fields.

The Indianapolis Colts likely would have been a team interested in Tagovailoa or Herbert if they fell out of the top-10, but they instead traded their first-round pick to the San Francisco 49ers as part of a deal to land defensive lineman Deforest Buckner. And for whatever legitimate criticisms there may be of Jimmy Garoppolo, it would be hard to fathom the defending NFC Champion 49ers using the No. 13 overall pick on a quarterback.

Both the Dolphins and Raiders have multiple first-round picks, meaning even if they don't use their first selection on Tagovailoa, they could still ultimately land the southpaw if he falls out of the top 10. Or maybe there's a team we haven't considered - like the Atlanta Falcons at pick No. 16 - that could swoop in and select Tagovailoa if some previously assumed suitors get cold feet.

Again, the guess here is that all three of Joe Burrow, Herbert and Tagovailoa are selected in the top 10 picks of the 2020 NFL Draft. But with less than 10 days before the 2020 NFL Draft begins, the possibility of Tagovailoa's medical history scaring off teams is something that at least needs to be considered. 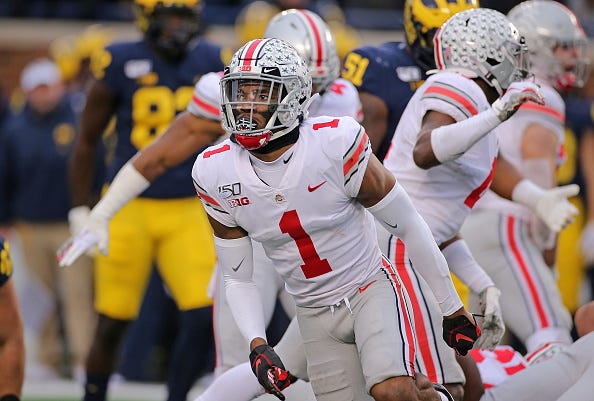 Lions Trade Down, Still Get to Select Corner

If we assume that one of the Miami Dolphins or Los Angeles Chargers feel they need to move up a few picks to secure their desired quarterback, the Detroit Lions may be the biggest beneficiary. They could move back a couple slots, which would secure them additional picks from the bounty of selections that the Dolphins, for example, possess over the next two years ago. And if they only move back to pick No. 5 or No. 6, they still would likely be in position to select Ohio State cornerback Jeff Okudah, who feels like the most likely pick if they stick at No. 3. Okudah could help to upgrade a pass defense that ranked dead last in the NFL in 2019 and traded away Darius Slay last month. 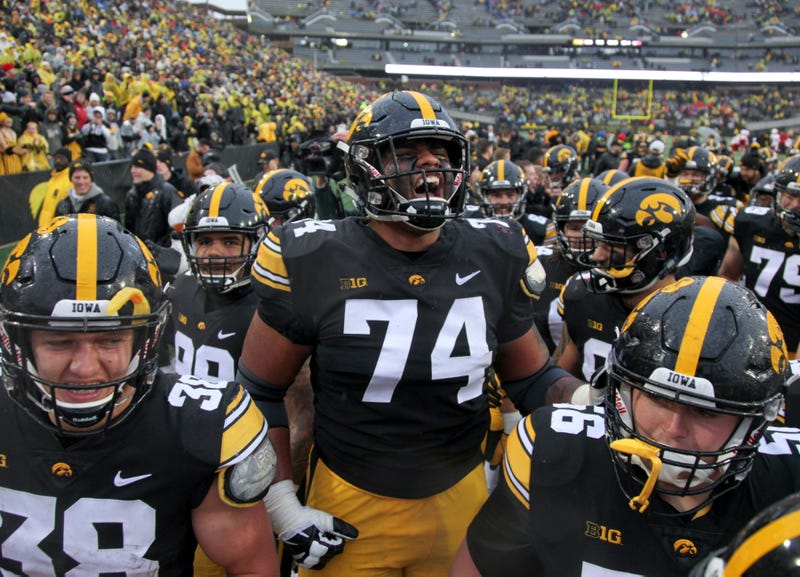 Tristan Wirfs may be the best offensive lineman in this class. Photo credit (Matthew Holst/Getty Images)

There was a time where it appeared like the Arizona Cardinals could consider taking a wide receiver with pick No. 8, but acquiring three-time All-Pro wideout DeAndre Hopkins seems to have nullified that possibility. That's fine, Pro Football Focus says that the Cardinals had just the 22nd-best offensive line in the NFL in 2019, so continuing the upgrade the offensive line in front of defending Offensive Rookie of the Year Kyler Murray should be a priority. There isn't a consensus No. 1 offensive lineman in the 2020 NFL Draft class, but Iowa's Tristan Wirfs turned heads at the NFL Combine, running the top 40-yard dash time among offensive line prospects and setting a new offensive lineman record with his 36.5-inch vertical. The athletic freak would be a welcome addition to a Cardinals team that increasingly looks formidable, even in the heavily-contested NFC West. 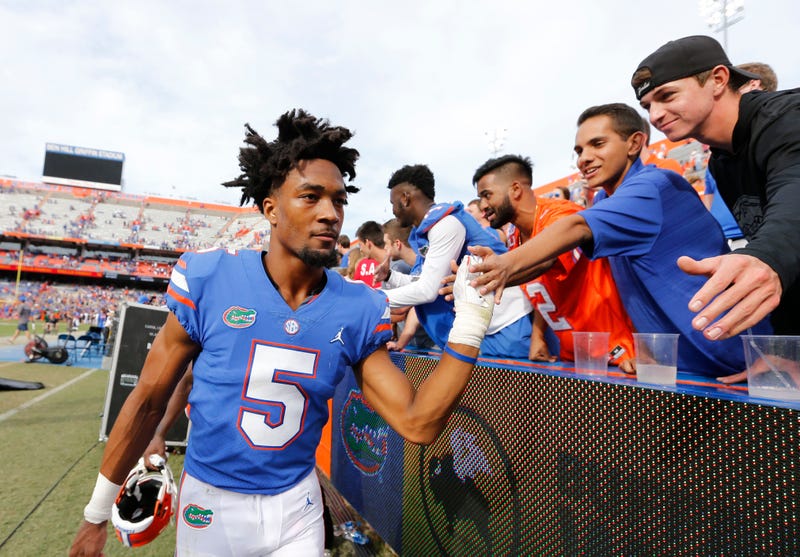 CJ Henderson is high on the draft boards of many teams. Photo credit (Kim Klement/USA Today)

The Denver Broncos could go in a variety of directions with pick No. 15. If one of Jerry Jeudy, CeeDee Lamb or Henry Ruggs III is still available when they're on the clock, that feels like the direction they'll head in. It's also entirely possible they choose to address the offensive line as a fall-back plan. However, they lost cornerback Chris Harris Jr. in free agency and have to face Patrick Mahomes twice a year. Peter King of NBC Sports said earlier this week that former Florida cornerback CJ Henderson is actually the No. 1 overall ranked player at his position. The guess here is still that Jeff Okudah will be the first cornerback off the board, but Broncos' head coach Vic Fangio - who, of course, has a defensive background - probably wouldn't mind landing Henderson in the middle of the first round. 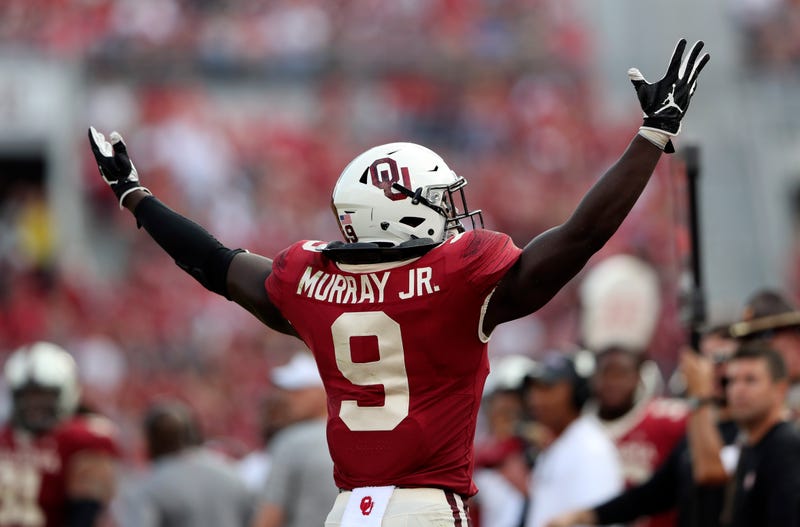 In 2019, the New England Patriots went 12-4, despite having their worst group of skill-position talent in over a decade. They did so behind the the No. 1 overall defensive unit, a group that was as dominant as any defense we've seen over the last few seasons. Having lost Kyle Van Noy and Jamie Collins in free agency, the Patriots could stand to retool their linebacking corps in this year's draft as they attempt to win their 12th consecutive AFC East title. In our latest mock, the Patriots trade up three selections - ahead of the linebacker-needy Philadelphia Eagles - and land fomer Oklahoma linebacker Kenneth Murray, who should flourish under Bill Belichick, Steve Belichick and Jerod Mayo. 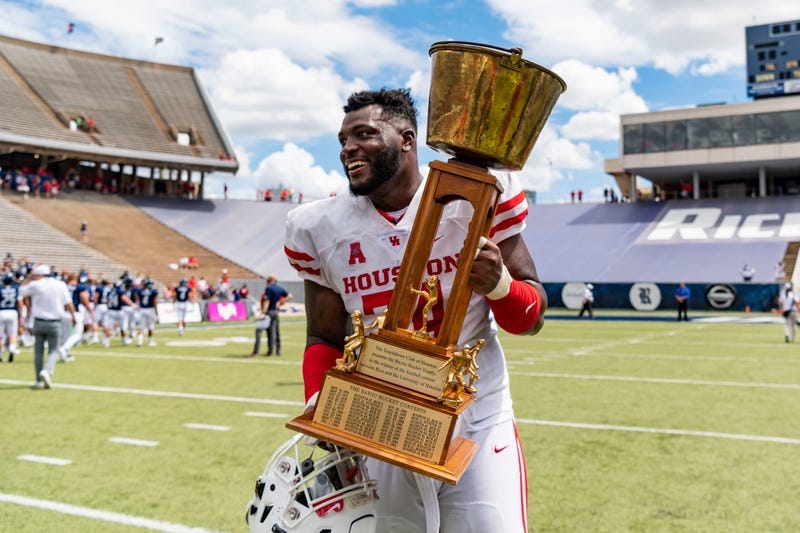 Josh Jones may be the final offensive tackle taken in the first round. Photo credit (Maria Lysaker/USA Today)

Perhaps this is a stretch, but if you're going to bet on the health of Tua Tagovailoa over the long run, using two of your three first-round picks on offensive lineman seems like a pretty sound investment. Having already selected former Alabama offensive tackle Jedrick Wills Jr. with the No. 18 pick, the Dolphins dip into the treasure chest again to move up four picks and take former Houston Cougar Josh Jones. Kyle Crabbs of The Draft Network calls Jones "a high ceiling, low floor offensive tackle prospect" and adds that he'll "ideally he can be weaned into a starting role in the NFL." If drafted under this scenario, Jones could compete with Julie'n Davenport for whichever spot Willis isn't playing at in 2020. (Wills may be moved to right tackle if Tagovailoa is selected, because that would be his blind side.) If he reaches his potential, you could end up with two elite offensive tackles over the long-run. Taking Tagovailoa despite his health risks is the type of decision a general manager bets his career on. If Chris Grier ultimately moves up to take Tagovailoa, he better do everything he can to assure he'll stay healthy. 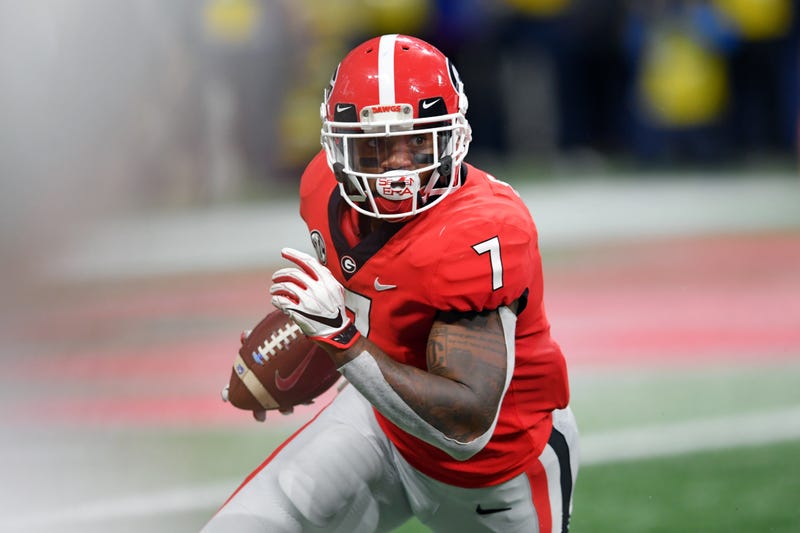 No Running Backs Selected Until Final Pick In First Round

The only reason left to take a running back in the first round is that you don't believe they'll be on the board the next time you are set to make a selection. But if Ezekiel Elliott and Christian McCaffrey have shown us anything, it's that having a fifth-year option on a running back you take in the first round doesn't mean much anymore. Elliott held out after his third NFL season for a new deal, and McCaffrey probably would have too if the Panthers and him weren't able to reach a long-term deal. At this time next year, we'll likely be having a similar discussion with Saquon Barkley. So when the Chiefs select former Georgia star running back D'Andre Swift with the final pick in the first round, they're not doing so expecting that he'll play for at least five years on his rookie deal. Brett Veach, Andy Reid and company are making this selection with the understanding that Swift would be a perfect compliment to Super Bowl hero Damien Williams for the next three seasons, adding to an already unfair offense. Anything beyond those three seasons would be gravy.