The NFL, per Glazer, is still a few weeks away from making a decision on how to proceed with Brown from a disciplinary sense. Signing him now doesn't make sense for any team, because the 31-year-old would intermediately be placed on the commissioner's exempt list, leaving whatever team would theoretically sign him to pay him, but not have him available to play.

From here, it's a little bit alarming that the idea of a team signing Brown has been so cavalierly thrown around over the last month. Never mind, the helmet drama and offseason fiasco that was his brief tenure with the Oakland Raiders organization. He's had a Hall of Fame caliber career, so if this was just about concerns about Brown's fit in a specific locker room, he would be on an NFL team.

But did we forget why Brown was released by the Patriots, despite hauling in four catches for 56 yards and a touchdown in his one game with the team?

Brown was released by the Patriots for sending "intimidating" text messages to a woman that accused him of inappropriate sexual behavior in a Sports Illustrated story. The Patriots initially stood by him after he was accused of sexually assaulting his former trainer Britney Taylor on multiple occasions. The NFL - and state of Florida - aren't overlooking those accusations, though. Nor should they.

If and when Brown is able to prove his innocence in each of these matters, it will be appropriate to discuss a return to the NFL. But while both matters are unresolved, it feels tone deaf to have the discussion about him returning to the NFL right now. Some things are bigger than winning football games.

While AB didn't play in Week 12, his two (three?) former teams all did and were part of a wild week. Here are three takeaways from Week 12 of the season:

The former No. 1 overall pick tossed three touchdowns and threw for 313 yards in a 35-22 win over the division-rival Falcons in Atlanta. He connected with third-year wideout Chris Godwin seven times for 184 yards, including the gorgeous throw seen above.

The problem is Winston threw two more interceptions, and continues to lead the league with 20 on the season. While Winston has thrown 110 touchdowns in nearly five NFL seasons, he's also been picked off 78 times and fumbled the ball 49 times in his career.

Winston isn't a case of a former top overall pick that never shows flashes of what made evaluators believe he had a chance to be an elite NFL quarterback. That's what makes him so frustrating - he constantly pulls you back in by making throws that a majority of NFL quarterbacks aren't capable of doing.

At 4-7, the Buccaneers are almost certainly going to miss the playoffs in 2019. Mind you, this an organization that hasn't made the postseason since 2007 - when Jon Gruden was their head coach and George W. Bush was still the president. Winston was drafted to snap that streak, and he's probably going to go his entire rookie contract without ending it, which makes you think that the Buccaneers may be best served to go in another direction at quarterback in 2020.

That, of course, is easier said than done. For as appealing as it sounds to plug in a veteran quarterback to throw to Godwin and Mike Evans, it's fair to wonder whether any potentially available options would be upgrades. The Jaguars have been blown out in Nick Foles' first two games since return from a fractured clavicle. It's impossible to predict what the future holds for Cam Newton. Philip Rivers will turn 38 in December and has just one more touchdown pass than interception in 2019. While Derek Carr has had a relative bounce-back in 2019, he's never rediscovered the form that made him an NFL MVP candidate in 2016.

It's unclear if the Buccaneers would consider spending another first-round pick on a quarterback, or if they'll be in position in the 2020 NFL Draft to take one that they would feel confident moving forward with.

So you wonder if the Buccaneers won't talk themselves into a second year of the Winston-Bruce Arians pairing. How exactly that arrangement would work out is unclear. Winston's rookie contract will expire after the 2019 season concludes. Has he shown enough to place the franchise tag on him, which would guarantee him a salary that's determined by the average of the top five highest-paid quarterbacks in the league? Probably not. But, if the Buccaneers attempt to retain him, it feels unlikely they would give him a multi-year extension. And if Winston isn't franchise-tagged or offered a multi-year extension by the Buccaneers, perhaps he would be interested in testing the free-agent market and seeing if another team would give him more security.

What does the future hold for Jameis Winston? It's hard to predict, just the like trying to predict whether he'll make an amazing throw or throw an inexcusable interception when he drops back. 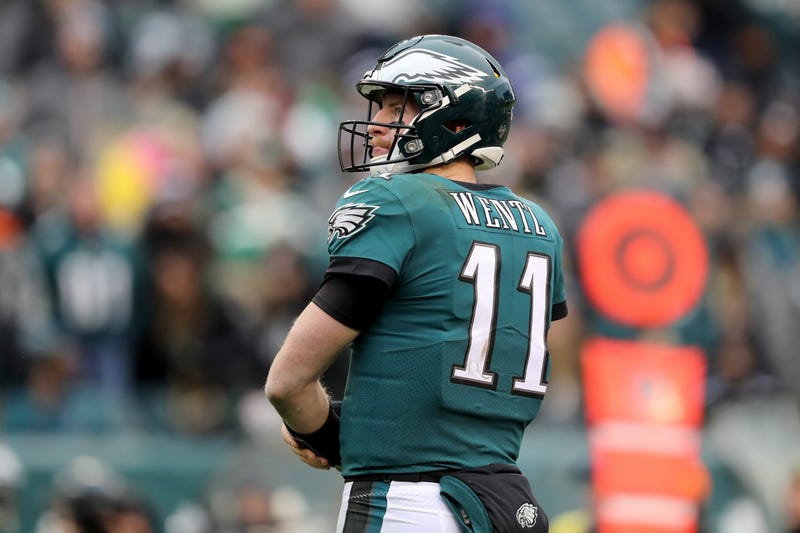 Carson Wentz and the Eagles have disappointed in 2019. Photo credit (Elsa/Getty Images)

Carson Wentz Has Lost His Confidence

Two years ago, Carson Wentz had an NFL MVP-caliber season halted when he tore his ACL in a Week 14 win over the Los Angeles Rams. He'll enter Week 13 of the 2019 season, two years removed from his final full game in his best individual season to date, seemingly in a dark place.

Wentz was underwhelming in a 17-10 loss to the New England Patriots at home in Week 11. In Week 12, he was, objectively, not good in a 17-9 loss to the Seattle Seahawks. He fumbled three times, losing two of them. Since Week 7, he's fumbled eight times. He entered Week 12 with just four interceptions on the season, but was picked off two times Sunday.

Though it didn't seem this way at the outset of the season, general manager Howie Roseman handed Wentz an unacceptable group of wide receivers in 2019. DeSean Jackson has only really played in one game. Alshon Jeffery has played in eight games, but looks to be an old 29, as he's averaging just over 44 receiving yards per game. Two years after becoming a feel-good story in the Eagles Super Bowl run, Nelson Agholor has regressed noticeably, and was absent from Sunday's game with a knee injury.

And those were supposed to be the Eagles' top three wide receivers. That says nothing of the remarkably ineffective season Mack Hollins has had, or how disappointing third-round pick JJ Arecega-Whiteside has been after an impressive preseason. Running back Jordan Howard has also missed two consecutive games.

There's plenty of blame to go around. The Eagles simply aren't even close to as talented as they appeared to be at the beginning of the season.

Over the past two games, however, things have gone from "what is Carson supposed to do with this offensive talent?" to him adding onto the problem by missing throws that he typically makes.

The Eagles have five games left and are still, somehow, in the NFC East race. But the quarterback that they rewarded with a four-year/$128 million deal ahead of the 2019 season looks unconfident - both in the receivers he's throwing to, and, increasingly, himself.

Two years after Nick Foles finished what he started and led the Eagles to their first Super Bowl title in franchise history, this was supposed to be the year Wentz got his. At this stage, the Eagles will be lucky to win the NFC East.

The ghost of Foles is real. There's a statue of Foles and Doug Pederson discussing "the Philly Special" in Headhouse Plaza at Lincoln Financial Field. The majority of Eagles fans preferred the team move forward with Wentz after 2019, but it's hard to forget how a stagnant Eagles team caught fire and made a run into the NFC playoffs a year ago after Foles replaced Wentz.

It doesn't matter that the Jaguars have been blown out in consecutive games since Foles returned from a broken collarbone. It didn't happen in Philadelphia. If anything, that's caused some Eagles fans to ponder whether reacquiring Foles this offseason - if the Jaguars choose to move forward with Gardner Minshew - is feasible. Never mind that Foles has never started more than 11 games in an individual season, what most remember of Foles in Philadelphia, understandably, are his postseason heroics.

Foles isn't going to return to Philadelphia in 2020. But his shadow looms over Wentz. The only way for Wentz to erase that is to win a title himself. But he can't enter every game trying to win the Super Bowl, that's not how this works. Right now, he looks like someone that desperately needs to find a way to mentally reset this offseason, and hope that he returns in 2020 with a different mindset - and much better wide receivers. 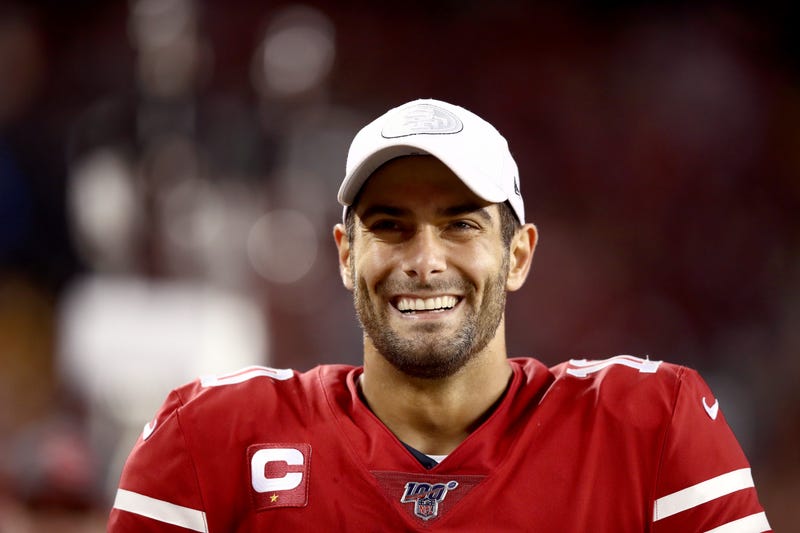 The 49ers Looked Like A Super Bowl Team Sunday

Jimmy Garoppolo and the 49ers moved to 10-1 Sunday, so it shouldn't be shocking that they looked like a legitimate Super Bowl contender.

Perhaps shocking isn't the right word. But whatever reminder they needed to issue to the league and themselves after an overtime loss to the Seattle Seahawks and two close wins against the Arizona Cardinals, they did it in their 37-8 win over the Green Bay Packers on Sunday Night Football.

Garoppolo threw for two touchdowns. He hooked up with his favorite target - tight end George Kittle - six times for 129 yards and one of those touchdowns. Sunday was Kittle's first game back after missing two consecutive games, but to call him healthy would be inaccurate - he's playing through a broken bone in his ankle.

Even without Matt Breida, the 49ers' elite rushing attack, stayed, well, elite, Sunday. Raheem Mostert, Tevin Coleman and Jeff Wilson Jr. were part of a rushing attack that averaged 5.1 yards-per-carry Sunday, reminding you that rush defense may be the Achilles heel of the now 8-3 Packers.

All of their offensive success acknowledged, if the 49ers are going to make a deep playoff run, it's going to be because of a defense that's looked like a historically-dominant unit for much of the 2019 season.

Arik Armstead led a defensive line that sacked Aaron Rodgers five times Sunday. Nick Bosa had a sack and a fumble recovery, and it feels like every time you look up during a 49ers game, he's shrugging his shoulders after making a game-changing play.

The 49ers, not the New England Patriots, have the No. 1 overall ranked defense after 12 weeks. They're holding opponents to just 14.8 points-per-game, and limiting opposing offenses to a league-leading 248 total yards of offense per game.

There's no rest for the weary, as the 49ers will play in Baltimore and New Orleans the next two weeks. They have a Week 17 showdown in Seattle, that could determine the NFC West title and who has home-field advantage throughout the NFC playoffs. There are still legitimate concerns about whether Garoppolo could go toe-for-toe with an elite quarterback in the postseason.

But, Sunday the 49ers blew out a team that many think is among a group that could contend for the NFC title. Even if they don't have the same formula as other Super Bowl contenders, they're 10-1, which, by definition, makes them a Super Bowl contender.