While the Sunday slate of Week 10 of the 2019 NFL season was less-than-inspiring, tonight will bring the best Monday Night Football matchup of the season, as the 8-0 San Francisco 49ers host the 7-2 Seattle Seahawks.

The 49ers sit atop of the NFC West and NFC as a whole entering tonight’s matchup, but Seahawks quarterback Russell Wilson, who has tossed 22 touchdowns and been picked off just once, is a serious contender for the NFL MVP.

That said, Wilson, right or wrong, will likely have to lead the Seahawks to the NFC West title to win the NFL MVP. If not, another legitimate contender has emerged, and headlines our Week 10 NFL takeaways:

1. Lamar Jackson Has His MVP Moment

During Saturday afternoon's LSU victory over Alabama, there was a lot of talk about LSU quarterback Joe Burrow having had his "Heisman Trophy moment" by leading his team to a victory over Nick Saban's Crimson Tide in Tuscaloosa. Baltimore Ravens quarterback Lamar Jackson has been there and done that, having won college football's most prestigious award as a member of the Louisville Cardinals in 2016.

Sunday, he may have made himself the favorite to win the NFL MVP, as he turned in a dominant performance against the winless Cincinnati Bengals.

Jackson only threw the ball 17 times Sunday, but completed 15 of his limited passing attempts, including throwing for 223 yards and three touchdowns. On the ground, Jackson ran for 65 yards on seven carries, including the 47-yard touchdown run above, which is the most memorable play of the 2019 NFL season thus far.

Rather incredibly, Jackson is only 22, and he's actually younger than the aforementioned Burrow, the current favorite for the Heisman Trophy. Yet, he's building a very compelling case to be the NFL's most explosive player. Jackson has now thrown for 12 touchdowns, and after surpassing 700 rushing yards on the season in Week 9, he remains on track to break Michael Vick's single-season record for rushing yards by a quarterback.

Certainly, there are things that could prevent Jackson from winning the NFL MVP. He's not going to have the gaudy passing numbers typically associated with an NFL MVP, ones like Wilson is putting up in 2019. There's also the risk every time Jackson runs the ball that he gets injured. Even the aforementioned Vick ran out of gas down the stretch of the 2010 season, when he finished runner-up in the NFL MVP race.

But awards are very narrative based. Right now, the narrative is that over the past two weeks, Jackson led the Ravens to a blow-out victory over the previously undefeated New England Patriots and then responded with one of the most electric individual performances that the league has seen this year in a 49-13 win over the Bengals.

Last week, it was written here that Jackson had made himself a legitimate NFL MVP candidate. This week, we'll say that at least until Wilson plays tonight, Jackson is the favorite to win the award. 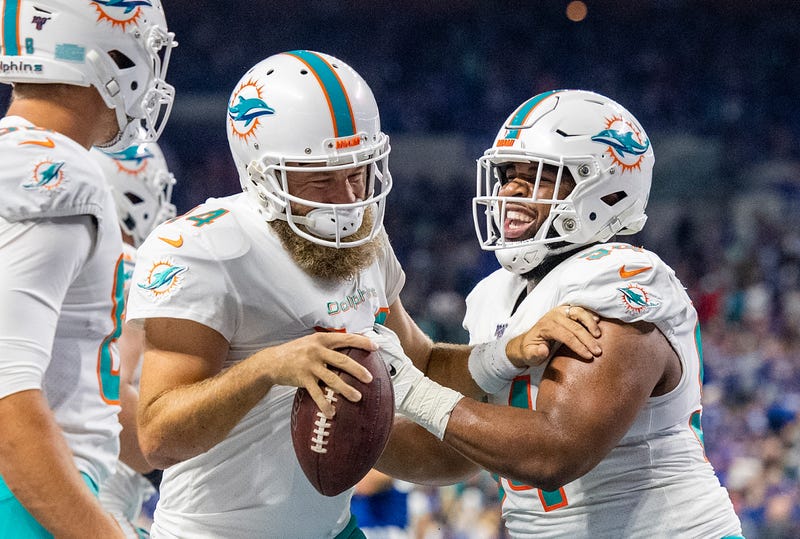 2. The Dolphins Are Blowing Their Chance At The No. 1 Pick

The race for the No. 1 pick in the 2020 NFL Draft is as interesting as it’s been in years. But as Troy Aikman said on FOX’s broadcast of the Green Bay Packers-Carolina Panthers game Sunday, the Miami Dolphins appear to have forgotten what the goal of the 2020 season was the last two games.

After defeating the Indianapolis Colts 16-12, the Dolphins have won two games in a row. If the sole goal of their 2019 season from an organizational sense was to obtain the top pick in next year’s NFL Draft, November has been a disastrous month for the Dolphins.

Of course, the players on the 2019 Dolphins aren’t concerned about where the team will pick in the NFL Draft. Many of them won’t be with the team in 2020, so they’re worried about putting good play on film for other potential employers.

But since they took a Week 1 drubbing at the hands of the Baltimore Ravens, #TankForTua has become a popular hashtag among Dolphins fans. That refers to Alabama quarterback Tua Tagovailoa, who was seen as the likely No. 1 pick in the 2020 NFL Draft before this season.

The guess here is Tagovailoa will ultimately be taken with the top pick in the 2020, which looks increasingly likely to be the property of the 0-9 Cincinnati Bengals. That said, LSU quarterback Joe Burrow is the favorite to win the Heisman Trophy, and he may be pushing his way into being a candidate for the top pick. The redshirt senior has exploded in 2019, as he’s thrown 33 touchdowns and been picked off just four times. His heartbeat never seems to rise, regardless of the situation, which is a quality you want in your franchise quarterback. He’s played a lot less than Tagovailoa in his college career, but he hasn’t been forced to have surgical procedures on both ankles, as Tagovailoa has.

The bigger issue for the Dolphins is that at 2-7, they may not even be in position to take the second quarterback in the 2020 NFL Draft, whether that’s Tagovailoa or Burrow. The Washington Redskins are 1-8, and it’s not hard to imagine them using a first-round pick on a quarterback for the second consecutive year. The Atlanta Falcons and New York Jets are also both 2-7, with the Dolphins having already beat the Jets once. While neither the Falcons or Jets would seem to have a reason to use a top-five pick on a quarterback, if the Jets get a higher pick than the Dolphins, they could shop the pick to other quarterback-needy teams to assure that their division-rival doesn’t get a chance to select Tagovailoa or Burrow. If they were willing to do business with the Dolphins, they could ask for a king’s ransom in terms of picks just to move up a few spots in the NFL Draft.

It was perhaps a mistake to think that Ryan Fitzpatrick, who will turn 37 later this month, wouldn’t find a way to lead the Dolphins to a few wins. The last two weeks haven’t exactly been vintage “Fitzmagic,” but leading this Dolphins team to consecutive wins may be the most impressive thing he’s done in his 15 years in the NFL. Dolphins brass would probably stop short of calling it magical, though. 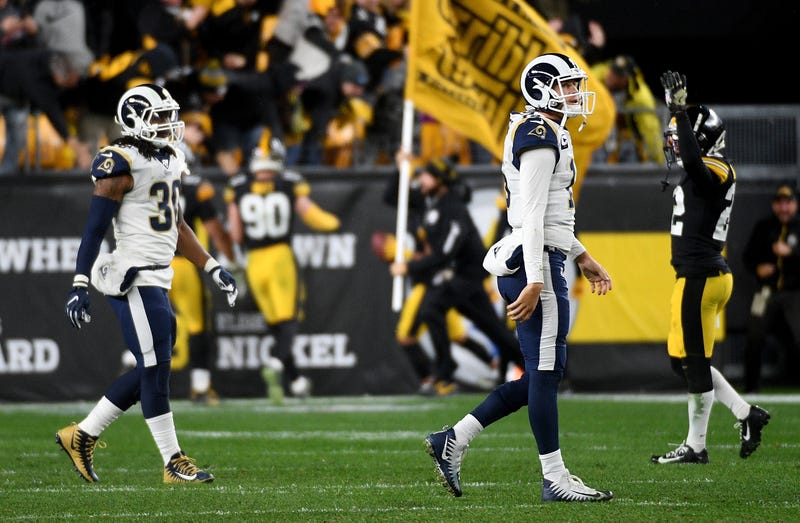 3. At The Very Least, The Rams Have A Mild Hangover

The Los Angeles Rams haven’t had the type of Super Bowl hangover where they haven’t been able to get out of bed the next day. But they certainly haven’t been productive in the same way they would be without a hangover.

After a 17-12 loss to the Pittsburgh Steelers Sunday, the Rams are just 5-4 in 2019. They’ve already lost more games in the 2019 regular season than they did in the entirety of 2018. Jared Goff threw two interceptions Sunday, and only has thrown two more touchdowns (11) than interceptions (nine) in 2019. Despite going all-in by trading multiple first round picks for cornerback Jalen Ramsey, the Rams look like a team that’s going to struggle to make the playoffs in 2019.

Consider this - while the Rams own the tie-breaker currently over the Philadelphia Eagles and Carolina Panthers, the other two 5-4 teams in the NFC, there’s no indication any of those three teams is going to win one of the two NFC Wild Card spots. After defeating the Dallas Cowboys on Sunday Night Football, the Minnesota Vikings are 7-3, and control the final Wild Card spot in the NFC. The division-rival Seattle Seahawks are 7-2, and own the top NFC Wild Card spot currently.

The 7-2 Seahawks are in San Francisco for a Monday Night Football matchup with the undefeated 49ers this evening. After a loss yesterday, any remaining hope of the Rams winning the NFC West is likely dashed. So perhaps the best thing for the Rams would be for the 49ers to defeat the Seahawks tonight. But while that’s certainly a possibility, there’s no indication that the Seahawks are going to go into the type of tailspin that would allow the Rams to catch them in the NFC Wild Card picture. While it may be fair to be hesitant to bet on Kirk Cousins in December, Dalvin Cook is a superstar and the Vikings are one of the deepest rosters in the NFL.

What’s more, even if the Seahawks or Vikings slip up, what have the Rams shown us in 2019 to make us think a run is imminent? Goff has regressed, and so too has their once-dominant rushing attack, as they’re 20th in the NFL in rushing offense.

Among their remaining eight games, the Rams will host the Seahawks and Baltimore Ravens, and play in San Francisco and Dallas. At this juncture, they look more like a .500 team than one that’s likely to mount a serious push to defend their NFC title.