The NFL’s offseason draws nearer with each passing weekend of playoff action. While several teams remain in the hunt for the ultimate prize, there are many more well into their offseasons already, including several who have made changes to coaching and management staffs.

Those teams will likely have additional major changes in the offing, but they’re not the only ones.

Plenty of teams will be looking to make big-time moves to get where they want to be, some of those may include trading star players — whether it be for cap space, not a good fit or to get started on a rebuild.

Regardless of the reason, a busy offseason is ahead and some major moves could be made that could potentially involve the following players: 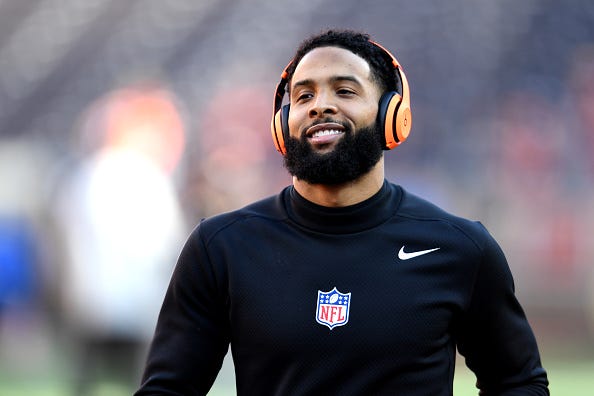 Beckham was the centerpiece of a blockbuster deal last offseason – and could reprise that role once again in 2020.

Acquired by the Browns in March as part of an effort to surround quarterback Baker Mayfield with offensive talent, Beckham is a rare talent with the star power -- and arguably the baggage -- to match. His banishment to the perpetually inept and rebuilding Browns felt like a mismatch at least, and perhaps even a punishment by his former employers, the Giants, after years of hot-and-cold.

Beckham’s first season in Cleveland didn’t go as planned, though he still posted respectable numbers of 74 catches for over 1,000 yards while playing in all 16 games. Now, though, he’s facing the prospect of possible offseason surgery for a sports hernia, which he reportedly played through in 2019, and most crucially another Browns rebuild.

Cleveland has already moved on from last year’s overhaul and has undertaken a new one, having sacked GM John Dorsey, who engineered the acquisition of Beckham, and one-and-done head coach Freddie Kitchens. Neither has been replaced as yet, and no one would blame Beckham for wanting out of that mess.

OBJ has publicly declined to clarify his wishes so far, though he reportedly told opposing players and coaches “Come get me out of here” before games this season.

Still in his prime at 27, and under contract through 2023, Beckham should have plenty left in the tank. Surely there are a handful of teams who would be happy to “get him out of” Cleveland -- here are several: 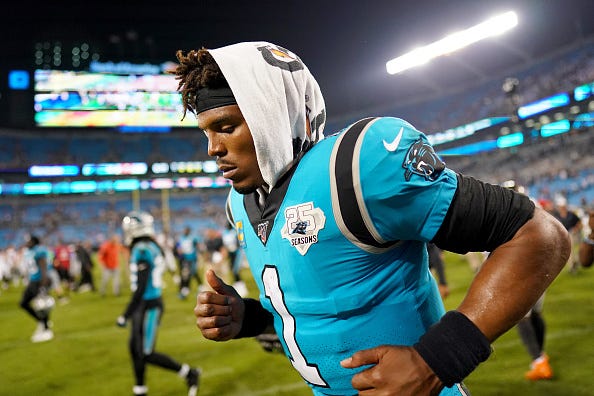 So, Matt Rhule, you want to be head coach of the Panthers. What is your plan for Cam Newton?

Surely that question was asked during the newly hired Carolina coach’s interview process. Though we can’t know his answer yet, earlier reports suggest the Panthers have been discussing offloading Newtown well before Rhule arrived, with team officials expecting a “large deal to make it worth their while.”

It would have been difficult to imagine Newton and the Panthers parting company as recently as last summer. But with Newton undergoing offseason surgery, free agency only a year away, and a new head coach in the fold, circumstances have changed in a hurry.

Reading the tea leaves, it appears the Panthers are as committed to Rhule as anyone in their organization, lavishing him with with one of the biggest deals ever doled out to a head coach in NFL history, reportedly stretching eight years and $70M. His deal with Baylor ran through 2027, so presumably Carolina was merely matching the existing contract, but even still, the Panthers have seemingly granted Rhule the kind of security not often seen among NFL head coaches, suggesting they were determined to land him and envision him as someone the organization can build around long-term.

No sane head coach would be in any hurry to ship out Newton, the 2015 MVP, but if Rhule is playing the long game, he may want to move on from a 30-year-old quarterback whose effectiveness depends on his mobility (and the threat of it) and is coming off surgery for a foot injury that limited him to two games last season. Judging by the contract, Rhule will have plenty of say over player personnel – and that could ultimately be the deciding factor in Newton’s fate. 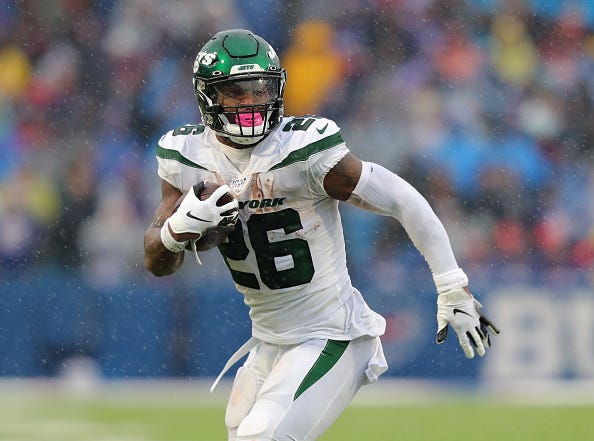 Le'Veon Bell eyes his next move during a game with the Jets. Photo credit Getty Images

Rarely does a team signal its intent to offload one of its major assets as the Jets have done with Le’Veon Bell. No less than Jets GM Joe Douglas and head coach Adam Gase have essentially acknowledged they’d like to move on, and while they have recently tempered those remarks, at this point it would still be a mild surprise if Bell returns next season.

Like Beckham, Bell was his team’s marquee acquisition last offseason, and also like Beckham, the GM who acquired him is no longer employed by the team. Douglas inherited Bell, who returned from a gap year after sitting out all of 2018 due to a contract dispute with the Steelers and joined the Jets on a hefty four-year, $52M deal brokered with former GM Mike Maccagnan.

Maccagnan was fired mere weeks after signing Bell. Such organizational dysfunction didn’t portend well for Bell’s comeback and the Jets’ season as a whole. Bell never found a groove and battled nagging injuries, and the team got off to a miserable 1-7 start before going 6-2 the rest of the way. Bell appeared to have lost a step from his Steelers days, and he was an easy target for defenses in an offense that was feckless without Sam Darnold and even stagnant at times with him.

There’s a lot to parse about Bell’s two lost seasons and what it might mean for his trade market. At 27 with some heavy usage on his legs, it’s fair to wonder if he’s finished as a productive every-down player. Certainly his value is only a fraction of what it was two years ago, his last in Pittsburgh, although Bell claimed a handful of teams were interested in acquiring him before October’s trade deadline – including the Steelers. The Jets will have to get creative to offload his contract -- and are unlikely to get much of value in return in their pursuit to cut their losses. 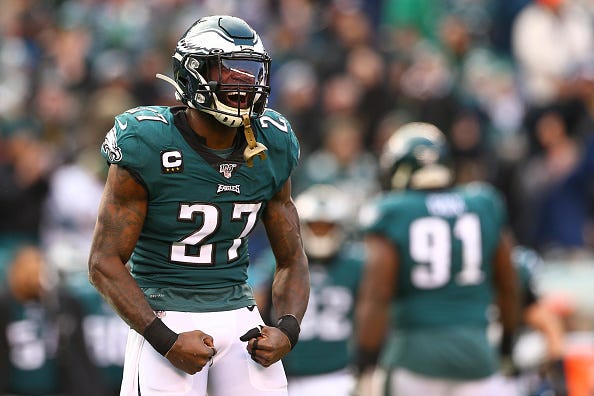 Jenkins’ season began by sitting out June OTAs over dissatisfaction with his contract, and it ended on a similar note:

“I won’t be back under the same deal,” Jenkins told reporters after the Eagles were eliminated from the playoffs.

In between, Jenkins contributed another season of steady, reliable play, starting all 16 of his team’s games – something he’s done in each of his six years since joining Philly’s defensive backfield in 2014 after five years with the Saints.

Jenkins is a solid if unspectacular player, and that could spell the end of his time with the Eagles, who are somewhere in between competing and rebuilding after a season in which they won a weak NFC East with significant contributions from journeymen and role players. While that accomplishment is commendable, it’s not necessarily a sustainable approach to building a football team for long-term success.

Eagles GM Howie Roseman has his work cut out for him this offseason, with a slew of free agents to evaluate and as many as 10 picks to spend in the upcoming draft. The presence of an established quarterback in Carson Wentz might suggest the Eagles are ready to win now – and Roseman may prefer to surround him with veterans accordingly. But at 27, Wentz’s window is open for years to come, and with due respect to Jenkins there’s little to suggest the Eagles couldn’t win without him or at least approximate his production at a cheaper price.

As always, it will come down to how much Jenkins wants, and how much the Eagles are willing to give him. If the gap can’t bridged, Jenkins could have a new home in 2020. 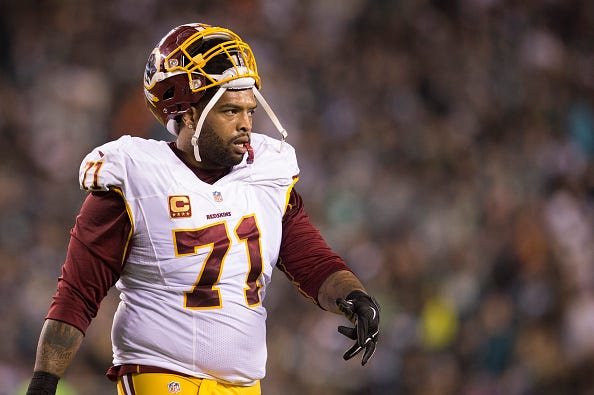 Trent Williams heads to the Redskins sideline during a game in 2018. Photo credit Getty Images

Like Bell last year, Williams is coming off a season-long holdout, perhaps even more bitter than Bell’s. Seeking a contract extension, and reportedly upset with team brass and the training staff over the handling of a cancer scare, Williams vowed to never return to the Redskins.

But Washington has since fired GM Bruce Allen, hired Ron Rivera as head coach, and brought in a decorated new head athletic trainer. Rivera has said he is interested in exploring Williams’ return, and teammate Chris Thompson said there is a “big chance” it will happen.

The change in leadership was probably the first necessary step for any hope of a Williams return to the Redskins, but there are still few indications about how the team wants to handle his contract or whether Williams’ contract demands have changed now that Allen is gone. In short, both sides appear to be signaling their preference for a détente, but the contract matter still has to be resolved.

If the sides can’t reach agreement on that issue, it seems likely there would be trade suitors for Williams, a starting offensive tackle with seven Pro Bowls to his credit who turns just 32 in July.

Where he could end up:

news
Survey finds Americans save over $400 by shopping holiday sales
music
Join us Dec. 1 for 'Heroes of New York' a Robin Hood Special
music
SAINt JHN reveals why 'Roses' was originally written for Beyoncé
music
A bunch of your favorite drag queens are hosting a New Year’s Eve kiki and kissing 2020 goodbye
news
Couple married 47 years die of COVID at the same time on the same day
news
Chipotle is testing smoked brisket in select cities for a limited time