Before NFL free agency begins, teams will be given the opportunity to place either the franchise tag or transition tag on unrestricted free agents.

Teams can begin using the franchise and transition tag on Feb. 25, and have until March 10, six days before free agency negotiations can begin, to use the tag on players.

The franchise tag comes in two forms — exclusive and non-exclusive. Teams have until July 15 to reach terms on a long-term contract with anyone who has been placed on the franchise tag, or play on a one-year tender.

The non-exclusive tag is what is most commonly used when speaking of the franchise tag. This is a one-year tender offer which amounts to no less than the average of the top five salaries at that players' position over the last five years, or 120 percent of his current salary, whichever is greater. Players can negotiate deals with other teams, however, the players' current team has the right to match any offer. If a team does not match, they get two first-round draft picks as compensation, making it extremely rare for the non-exclusive tagged player to sign with another team.

The exclusive franchise tag is slightly different. It is a one-year tender offer which amounts to no less than the average of the top five salaries at that players' position for the current year, or 120 percent of his current salary, whichever is greater. A player cannot negotiate with another team. This tag is most often applied to quarterbacks, or players whose value would warrant two first-round picks.

The transition tag is an alternative to the franchise tag, where teams can offer a one-year tender for the average of the top 10 salaries at that players' position, instead of the top five. This results in the transition tag being less money than the franchise tag. Players can also negotiate with other teams, but the original club has the right of first refusal to match any offer. There is no compensation if the original club chooses not to match, though, making it a little trickier for teams to navigate.

Below are some of the notable players who could potentially be placed under the franchise tag this offseason: 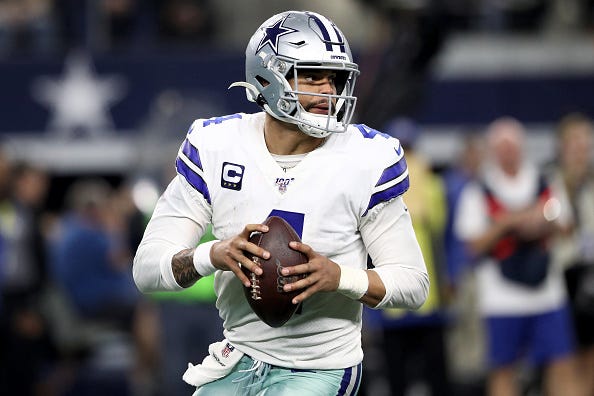 After spending a season of will they or won’t they sign Prescott to a long-term extension, the Dallas Cowboys quarterback remains unsigned and likely won’t get the chance to test the free agent market, either. As Mike Garafolo and Ian Rapoport of NFL Network reported earlier in February, the expectation is that the Cowboys will place the franchise tag on Prescott.

The projected franchise tag would pay Prescott $26.8 million for the 2020 season, although if Jerry Jones believes in Prescott as the true franchise quarterback of the Cowboys, a long-term deal should get done, right? Things never seem to be that simple in Dallas, though. 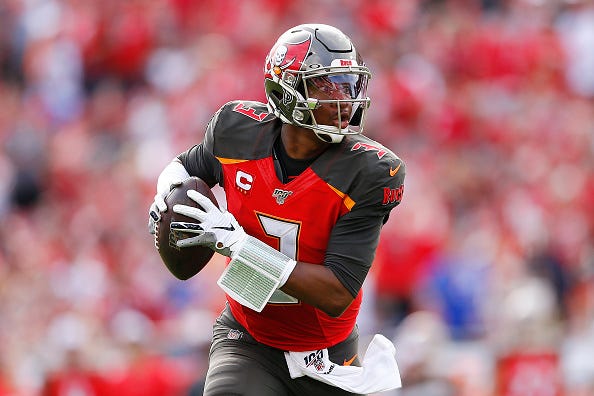 Winston seems like a prime candidate destined for the franchise tag. He led the NFL with 5,109 passing yards in 2019, and had 33 touchdowns, but nobody knows what to make of Winston’s future because of his 30 interceptions that went along with his gaudy offensive numbers. Winston did receive LASIK surgery, so perhaps that may help solve his turnover woes. Tampa Bay could use the franchise tag as a one-year extension to see if there is any improvement with Winston, or if they should indeed move on from him at quarterback. 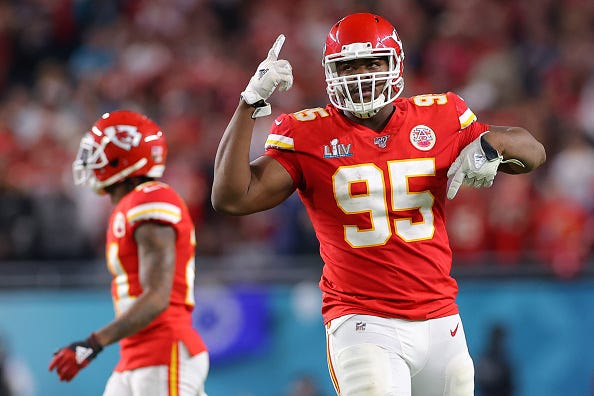 Jones is lined up to receiver a big payday as a free agent, but the Chiefs do not have a whole lot of financial flexibility and will likely want to offer Mahomes what could be a record-breaking extension in the near future. It is possible the Chiefs could employ the same strategy on Jones that they used on Dee Ford last year. Kansas City placed the franchise tag on Ford and traded him away to the 49ers for assets. By doing the same with Jones, they could give Mahomes whatever money he wants and gain the assets to surround him with young, inexpensive talent. 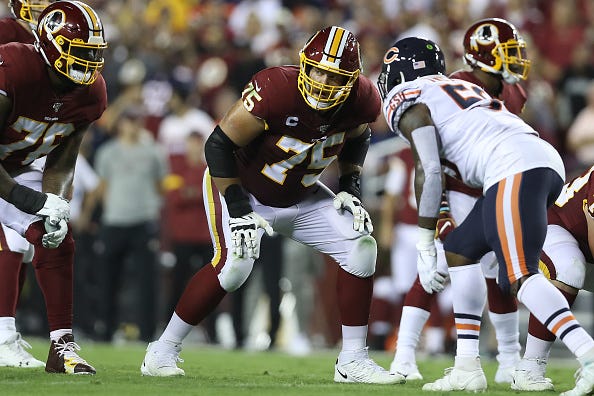 Scherff may have only played 11 games last season, but he was still a Pro Bowl guard for the third time in his career. Having a reliable offensive line in place is necessary for Dwayne Haskins’ development, so it would be foolish for the Redskins to let Scherff walk away in free agency. Locking up Scherff long-term figures to be a priority, but it is likely the Redskins will want to place the franchise tag on him so the two sides can spend the appropriate amount of time working out a long-term deal. It is also possible they let him play on the projected $15 million one-year contract to see if the 28-year-old is worth the investment. 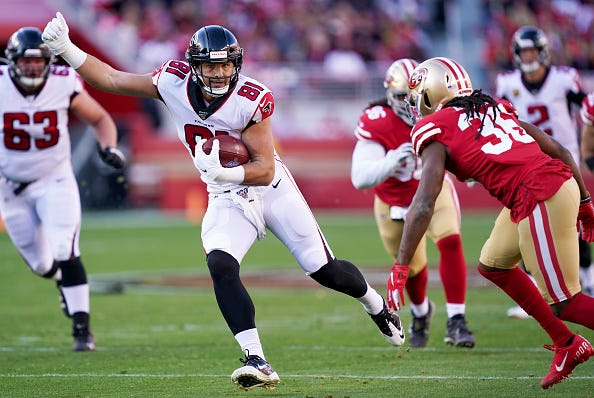 Hooper has now put together back-to-back Pro Bowl seasons as he is about to hit free agency, but as of Super Bowl weekend, Hooper and the Falcons have yet to begin any sort of negotiations on a long-term contract. The projected franchise tag salary for tight ends figures to be around $11 million, and the thinking surrounding Hooper is he could get a contract for $13-14 million per year.

The franchise tag would obviously make Hooper more affordable for the Falcons, but Atlanta is strapped for cap space and even the tag may be difficult for them to take on. Perhaps they tag him and try to flip him in a trade in order to get something in return, but if teams know they must move him they may not have the leverage needed to execute a deal they like. 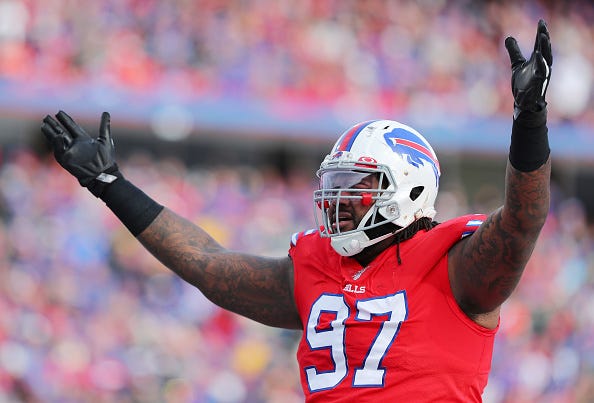 The Bills have plenty of depth and strength on their defensive line, yet Buffalo may use the franchise tag on interior defensive lineman Jordan Phillips, per CBS Sports' Jason La Canfora. It will be a nice raise for Phillips, who was signed off waivers in 2018, as he will project to make $15.5 million.

Phillips arguably may not be worth that price tag, but by franchise tagging him it allows the Bills to retain him for just one year instead of committing major long-term money, when they will have several more important pieces due for big contracts in 2021 (Tre'Davious White, Dion Dawkins). Depending on how the 2020 season goes, Josh Allen could be in line for an extension, too. So, they will pay more money to keep Phillips in the short-term, rather than have him clog up cap space in the long-term when they will need it. 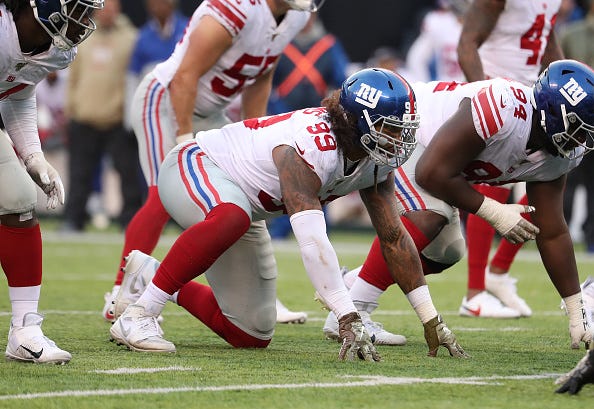 What was already a puzzling trade made by the Giants mid-season could somehow get even worse. The Giants traded two picks (a third and a fifth) for Williams, so re-signing him is likely a priority. But Williams has all the leverage. The franchise tag for Williams would pay him $15.5 million, which is likely how much he will ask for in negotiations.

Williams is not worth that price, but the Giants are backed into a corner. They can sign him long-term for less than the franchise or transition tag ($13 million range) would cost, but is he worth anything more than a one-year contract? Bringing him back on the franchise tag would be wildly overpaying for an underachieving former first-round pick, and using the transition tag would cost less, but if another team made an offer and the Giants refused to match, they would not receive compensation, making that a risky play, too.

However this plays out, it will surely be a victory for Williams with the Giants hoping for the best. 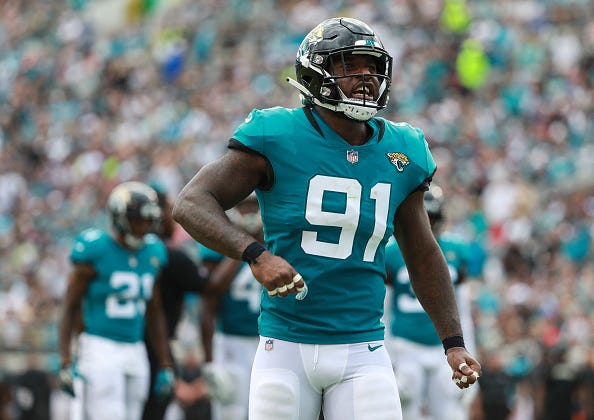 Ngakoue is arguably the best pass rusher on the free agent market this year, and the Jaguars are not going to want to give him up just yet. Defensive ends are expected to receive $19.3 million on the one-year tender after making just $2 million in 2019. The Jaguars actually enter the offseason slightly over the salary cap, which may make reaching a long-term deal difficult. The two sides already failed at agreeing to an extension, but by using the franchise tag it will at least allow the Jaguars to by themselves time and retain Ngakoue's services for at least another year. 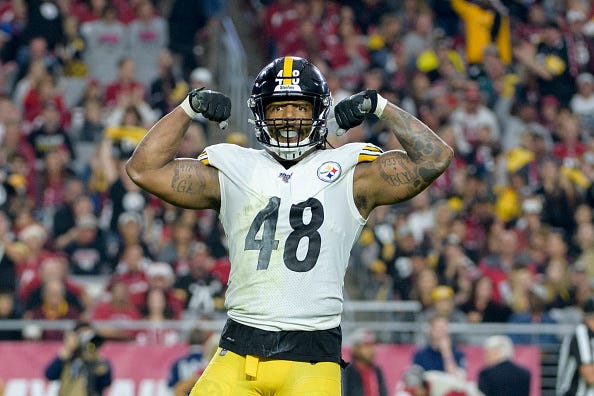 After an underwhelming start to his career, Dupree proved what he is capable of on his fifth-year option by recording 11.5 sacks in 2019. Now, the Steelers are faced with the tough decision of what to do with Dupree. With Dupree finally tapping into his potential, the franchise tag seems to be a likely option. The Steelers could extend the window on a long-term negotiation, or see if Dupree can do it again in 2020.

However, there is incentive to get a deal done should they tag him. If Dupree has another stellar season, his price tag will only increase, which will may create more cap space issues with T.J. Watt and Minkah Fitzpatrick in line to get long-term deals following the 2020 season, too.