Trying to predict trades in advance of the NFL Draft is an exercise that's scoffed at by some. It's a bit strange, though, to do a full first-round mock and not include at least a few trades - they are bound to happen.

In 2020, unlike many other years, there are pundits that believe each of the teams that possess the top five picks should be open to trading their picks.

The Cincinnati Bengals have the chance to select former LSU quarterback Joe Burrow, an Ohio native, with the No. 1 pick. That said, there are some who believe that if the right team calls - specifically if said team is the pick-rich Miami Dolphins - that the Bengals should be at least open to listening, especially with two other quarterbacks expected to be picked in the top 10 and Clemson superstar Trevor Lawrence looming in next year's class.

It's assumed that the Washington Redskins won't be in the market for a quarterback a year after selecting Dwayne Haskins with their first-round pick, leaving them to select former Ohio State defensive end Chase Young, who is seen as a potential generational talent. That said, some are beginning to argue that the Redskins, who are essentially a blank slate, would benefit more from collecting a haul from a team interested in trading up for a quarterback or to draft Young than landing one player. From here, Young isn't the type of player you pass up on the chance to select. We'll see if Ron Rivera and company feel the same way.

The Detroit Lions may be wise to stay at the No. 3 and just select a star defender, hoping to upgrade Matt Patricia's defensive unit, which was the 31st ranked unit this past season. However, they could be in prime position to capitalize if a team becomes enamored with Tua Tagovailoa or Justin Herbert, and feels they need to trade up to assure they land their future franchise quarterback. Ditto for the New York Giants, who possess the No. 4 overall pick.

And it's anyone's guess what the Miami Dolphins will do at No. 5. The Dolphins own five first round picks over the next two years, so if any team is capable of making a team an offer they can't refuse, it's the one that Chris Grier leads.

So, as we wait for next week's NFL Draft combine, let's have some fun. Here's the latest RADIO.COM NFL Mock Draft, with trades included for the first time: 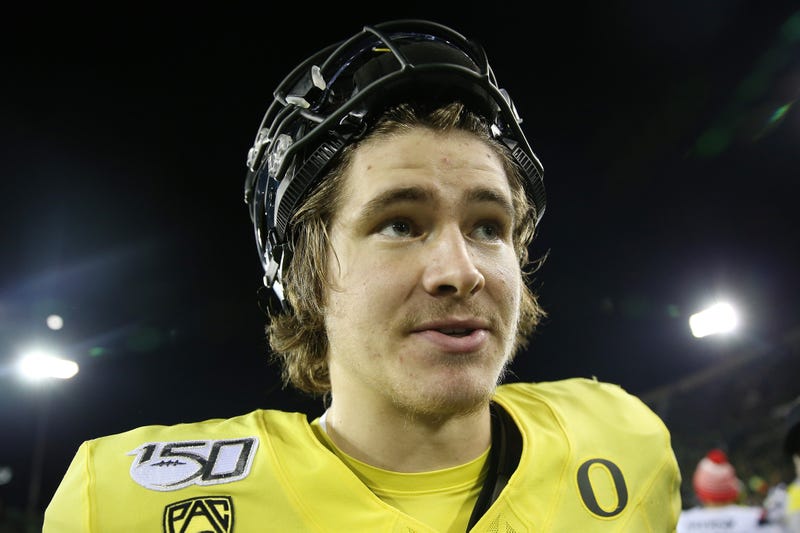 Perhaps we're reading too much into one report, but Armando Salguero of The Miami Herald recently reported that the Miami Dolphins have "an increasingly positive view of Oregon quarterback Justin Herbert," which comes on the heels of Dolphins' owner Stephen Ross voicing concerns about Tua Tagovailoa's durability. In this mock, the Dolphins use their army of picks to trade up two spots and assure they land Herbert, leaving Tagovailoa on the board. The Los Angeles Chargers, desperate for a star as they move into SoFi Stadium, take the risk on Tagovailoa's health and move up to select the former Alabama quarterback. 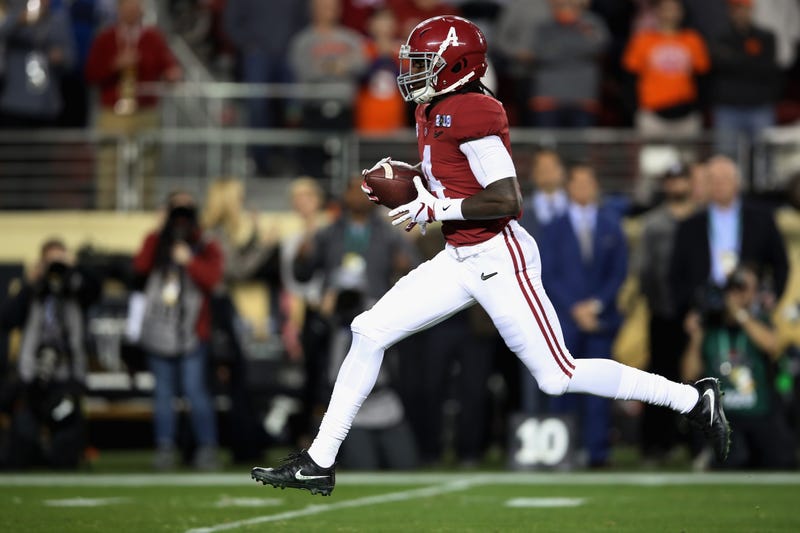 The Raiders swung and missed last summer on Antonio Brown, leaving them with a need for a No. 1 wide receiver. With former Alabama star Jerry Jeudy sliding down the board, Gruden's Raiders move up three picks to assure they land a wideout with star potential. If he heads to Las Vegas, Jeudy would be reunited with his former Alabama teammate Josh Jacobs, who had a strong rookie season for the Raiders. We're still not entirely sure who will be playing quarterback for the Raiders in their first season in Las Vegas, though. 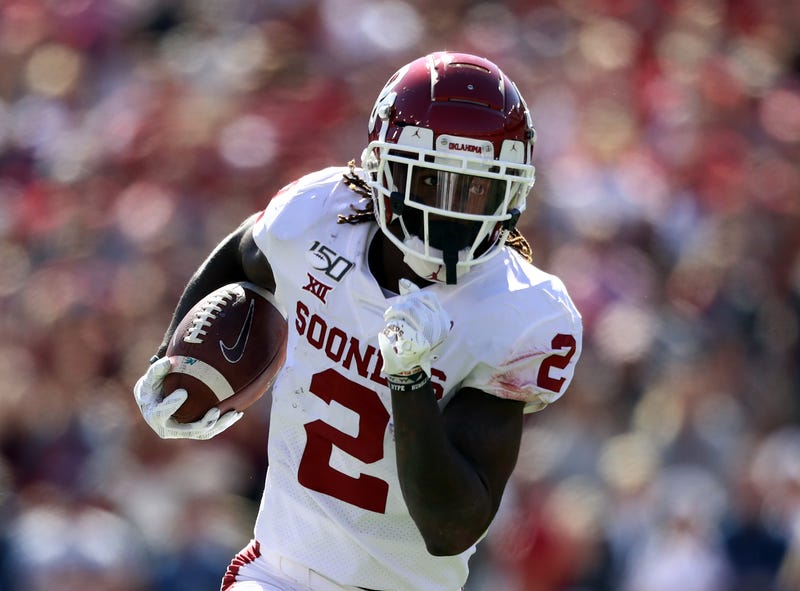 CeeDee Lamb has a chance to make an immediate impact in the NFL. Photo credit (Ronald Martinez/Getty Images)

The Colts may ultimately prove to be at too low of a spot to land their future franchise quarterback with the No. 13 pick, but with such a focus on quarterbacks early, former Oklahoma wide receiver CeeDee Lamb falls to them at the No. 13 pick. Two picks later, the Broncos land Jerry Jeudy's former college teammate Henry Ruggs III. That would leave the Colts with T.Y. Hilton and Lamb, and the Broncos with Courtland Sutton and Ruggs III. That's not too shabby in either case. 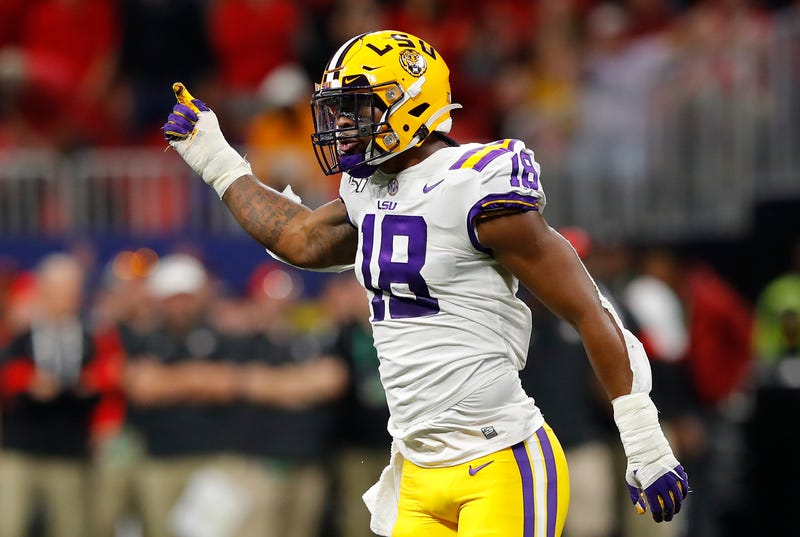 In a first round full of quarterbacks and wide receivers, picks 16-20 turn into a run on defenders in our latest mock. We previously discussed how crucial it is for the Falcons - who have a pretty brutal cap situation - to land an impact defender in the first round. Henderson allows the Cowboys to replace Byron Jones, who is likely to depart in free agency. The Dolphins, Raiders and Jaguars all have multiple first-round picks, and use their second selections in this round to retool their respective defenses. 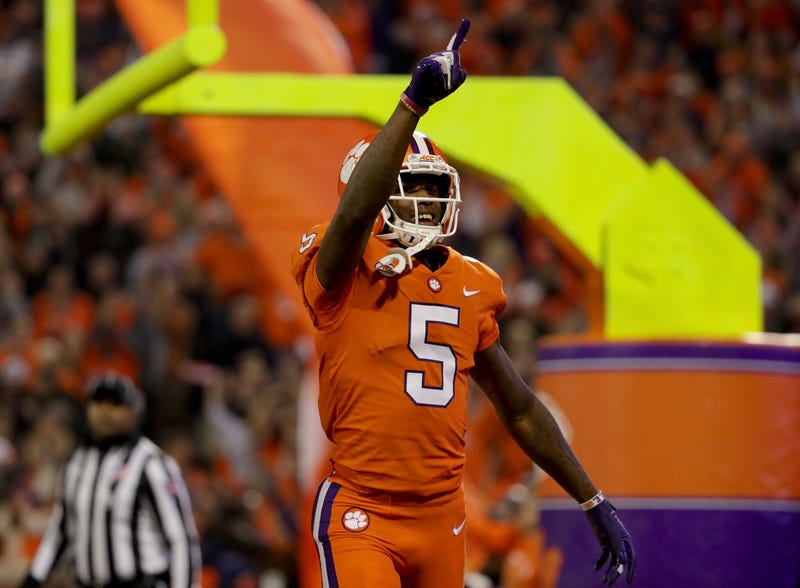 Even with three wide receivers coming off the board before either get a chance to make selections, the Philadelphia Eagles and Buffalo Bills both land wide receivers in this mock. It's possible that Laviska Shenault Jr.'s injury could be of extra concern to the Eagles after their wide receiving core was devastated by injuries in 2019, but the juice he could add to an offense that lacked such a piece for much of this past season is too good to pass up. Meanwhile, the Bills would be happy to add former Clemson star Tee Higgins to a budding offensive core that already includes Josh Allen, Devin Singletary, John Brown, Cole Beasley and Dawson Knox. 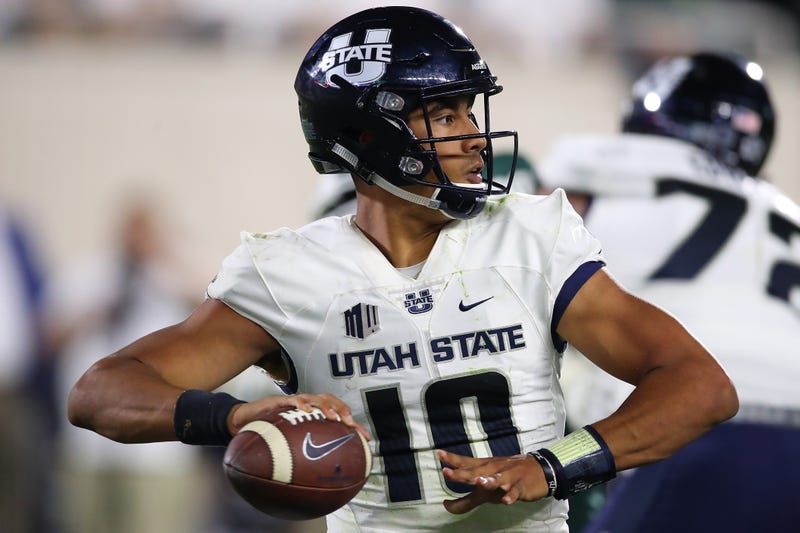 Colts Trade Back Into First Round to Take Quarterback

Jordan Love's sophomore season may have been enough for him to be a top 10 pick, as he tossed 32 touchdowns and was picked off just six times. However, his junior season was very much a mixed bag, with him throwing 17 interceptions and just 20 touchdowns. Still, the 21-year-old out of Utah State has ideal size, and it's hard to erase how impressive he was two seasons ago from your memory. By trading back into the first round, the Colts secure a fifth-year option on Love, and can have him sit behind Jacoby Brissett for part or all of 2020.