It feels strange to be preparing for a Super Bowl that Tom Brady and the New England Patriots aren't set to play in. However, after a Wild Card Weekend exit at the hand of the Tennessee Titans, it feels entirely possible that we've seen the last of the Brady/Bill Belichick era Patriots in the Super Bowl.

We've maybe seen the last of the Brady/Belichick Patriots period.

On March 17, Brady's contract for 2020 will automatically void, leaving the Patriots with $13.5 million in dead cap money for next season and unable to franchise tag the 42-year-old quarterback.

For his part, Brady sounds uninterested in retiring. He apparently is willing to consider the possibility of playing outside of New England, where he's spent all 20 seasons of his illustrious career. In fact, RADIO.COM Sports NFL Insider Jason La Canfora, writing for CBS Sports, said this past weekend that it would be "extremely surprising" if Brady re-signs in New England before at least testing free agency for the first time in his career.

Additionally, La Canfora's report said that Brady "is eager to take on the role of a mentor to a young quarterback," which leads you to think that even if he does return to New England, he knows it will be with his eventual successor on the team with him.

With that in mind, the Patriots land a quarterback in our latest RADIO.COM NFL Mock Draft, the second quarterback drafted by an AFC East team: 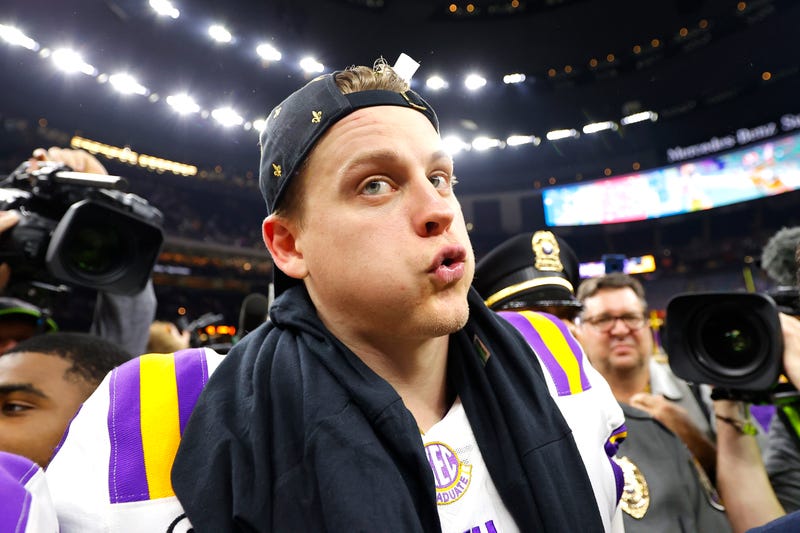 Joe Burrow is expected to be the No. 1 overall pick. Photo credit (Kevin C. Cox/Getty Images)

Analysis: ESPN's Adam Schefter said on Sunday NFL Countdown that there's no indication that the Bengals will trade the No. 1 pick, meaning Joe Burrow appears headed back to Ohio...This isn't a slight on Burrow, but if Tua Tagovailoa is able to stay healthy throughout the course of his NFL career - which is definitely a big "if" - he could end up being the best quarterback in this class still...Chase Young is the best player on the board and one of the best to enter the NFL in the last five years...Matt Patricia will enter 2020 on the hot seat and needs a major defensive bounce-back after a disappointing 2019 - Okudah is the second best defensive prospect in this year's class...Certainly, there's a case for the Giants taking a wide receiver (or trading down with a team looking to take a quarterback), but finding the piece that will protect Daniel Jones' blindside for a decade doesn't sound half bad either. 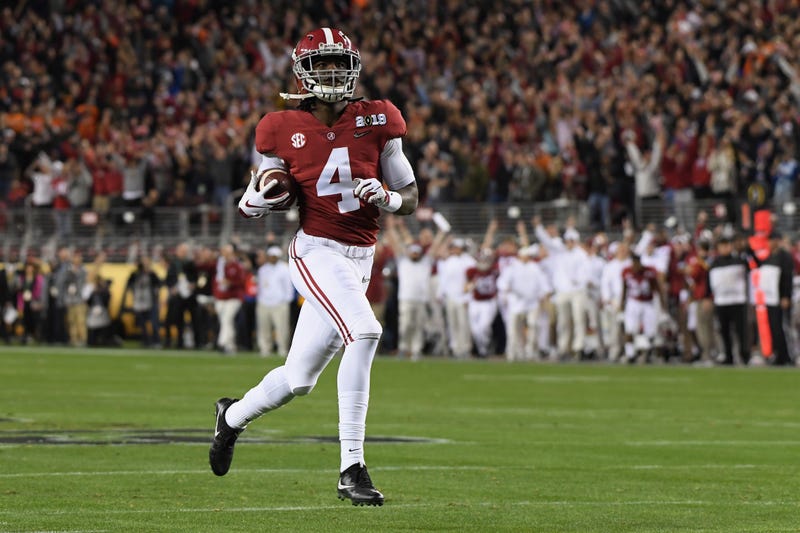 Analysis: Even if they employ a future Hall of Fame quarterback in 2020, Herbert would give the Chargers' their long-term answer at quarterback...It would be ironic for the Panthers to build a great group of skill-position players as Cam Newton exits, but if Jeudy falls to them, that may just happen...The Cardinals absolutely have some needs defensively, but reuniting Lamb with Kyler Murray would be too good of an opportunity to pass up...The Jaguars had a ferocious defense when they played in the AFC Championship Game two years ago - Simmons would help them to retool to get back to that end...The Browns had the 30th-ranked rush defense in 2019, one of the many things they need to fix and Brown is going to be a star. 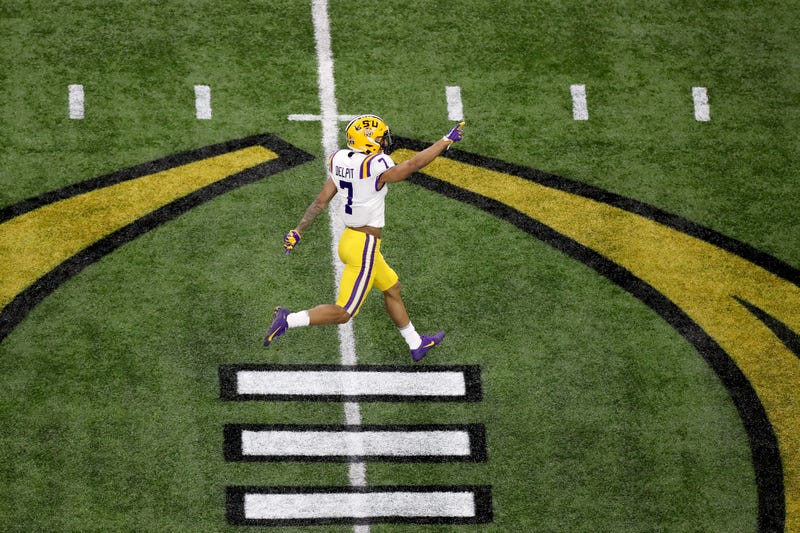 Analysis: The Buccaneers could go in a ton of different directions, but Delpit would allow them to upgrade a pass defense that was the 30th-ranked unit in 2019...The Jets selecting Jackson would mean that both New York teams get their long-term left tackles in the first round...It wouldn't be hard to imagine the Colts considering taking Jake Fromm here, but we'll say they instead will add another veteran QB option and land an edge rusher here instead...Shenault Jr. would allow Jon Gruden to continue building his talented, young offense...Ruggs III would be a pretty nice piece to add to Drew Lock, Courtland Sutton, Philip Lindsay, Noah Fant and an offense that suddenly has a bright outlook for the future. 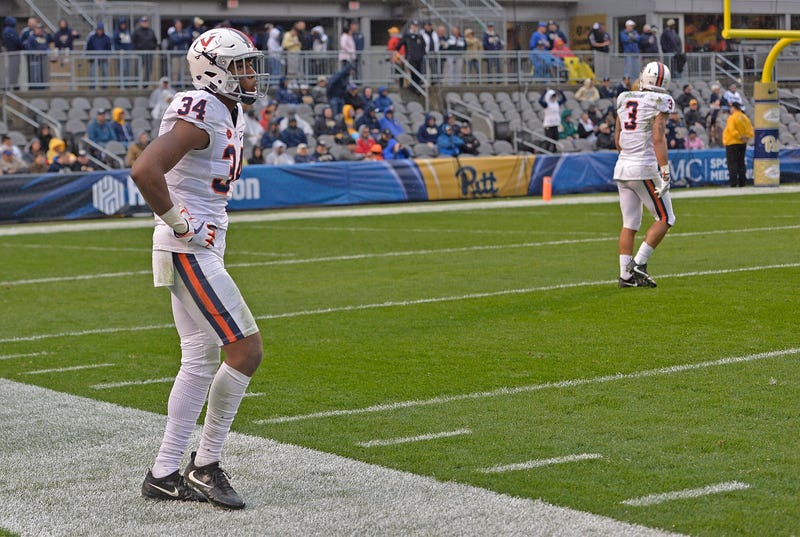 Henderson would help upgrade the Falcons' secondary in a crucial season for Dan Quinn...Hall may very well end up replacing Byron Jones, who can become a free agent this offseason...The Dolphins are a blank slate, and the best way to fill out a blank slate is to draft a quarterback and a left tackle, which we've projected the Dolphins to do with their first two first-round picks...With picks they landed in the trades of Khalil Mack and Jalen Ramsey, the Raiders and Jaguars both land impact defenders in this mock. 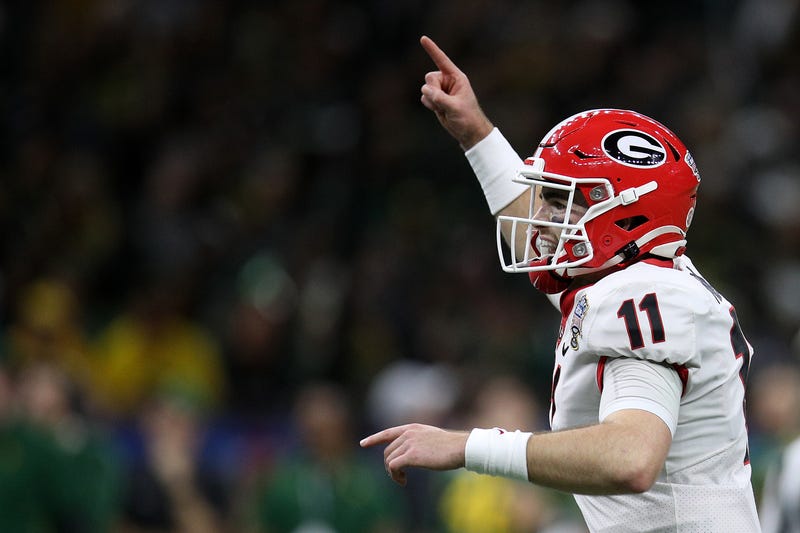 The Eagles desperately need a young, play-making wide receiver, so Higgins would fit well as a weapon for Carson Wentz...The Bills selecting Swift is more of a place-holder, as they probably trade the pick if he's still on the board to assure he doesn't end up in New England...The guess here is Tom Brady won't be back in New England, which means they'll likely sign a veteran - someone like Teddy Bridgewater or Andy Dalton - to keep the team competitive until Fromm is ready to play...It's strange how much the Saints need to add a wide receiver given Michael Thomas' dominance, but there was a reason they were willing to work Antonio Brown out late in the 2019 season...The addition of Davis would help Mike Zimmer to re-tool a defense that was 20th against the run in 2019. 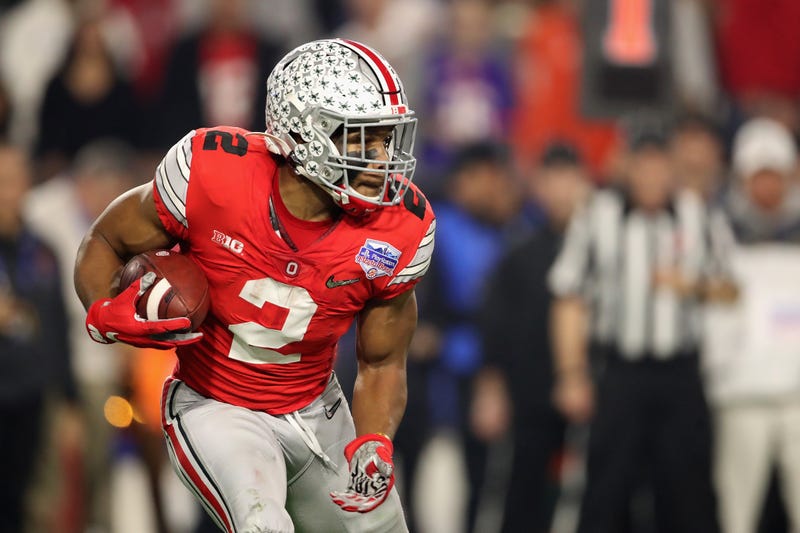 J.K. Dobbins is ready to make an impact in the NFL Photo credit (Christian Petersen/Getty Images)

While Tagovailoa's status for 2020 is unknown, if they add him, Wirfs and Dobbins, the Dolphins could become competitive in the AFC East by 2021...Certainly, the Seahawks could stand to add another play-making wide receiver, but McKinney is too good of a player to potentially let fall to the division-rival 49ers...ESPN's Todd McShay has Weaver rated as the No. 16 player on his big board, so getting him 12 picks after that feels like a steal...Baun would help to improve the Titans' pass rush as they hope to build on an extremely successful 2019 season...Hamler was one of the most underrated players in the country in 2019 and would add some more explosiveness to Matt LaFleur's offense...The Chiefs haven't truly replaced Kareem Hunt and still may win the Super Bowl, so imagine if next year's Chiefs team has a star running back...The 49ers are such a complete team that they may very well trade out of this pick, but Gladney, who Jordan Reid of The Draft Network is high on, would help improve their cornerback depth if they keep the pick.