For the first month of the 2020 regular season, Russell Wilson played at as high of a level as any quarterback in the NFL, and it seemed that if the Seattle Seahawks could figure out how to make necessary adjustments defensively, they were destined to represent the NFC in the Super Bowl.

Incredibly, the defense did make drastic improvements as the season went on, only for the offense to peak at the wrong time. For as electric as the Seahawks offense was in the first half of the season, they scored 30 or more points just once in the final nine games, including a 30-20 loss to the division-rival Los Angeles Rams at home on Super Wild Card Weekend.

Now, as the final eight teams prepare for Divisional Round Weekend, Wilson is at home and the Seahawks are looking for a new offensive coordinator, after parting ways with Brian Schottenheimer earlier this week. After the first month of the season, one would have though if the Seahawks were looking for a new offensive coordinator after the season, it would have been because Schottenheimer let Wilson cook all the way into him being hired as a head coach.

But here we are.

Though Wilson would have topped any early-season NFL MVP lists, he's not on the table as we rank the eight best remaining quarterbacks ahead of Divisional Round Weeknd: 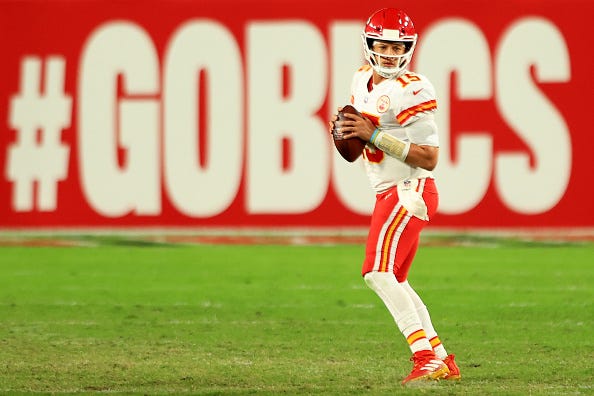 Mahomes could finish as low as third in NFL MVP voting for the 2020 season, but it was difficult to put anyone above him. During a regular season where the Chiefs seemed borderline bored at times, Mahomes tossed 38 touchdowns to six interceptions, while racking up 4,740 passing yards. In the 15 games he started in 2020, the Chiefs went 14-1. As he, Travis Kelce and Tyreek Hill prepare to flip the switch - and are coached by Andy Reid coming off of a bye week - we wouldn't prefer anyone under center over Mahomes. 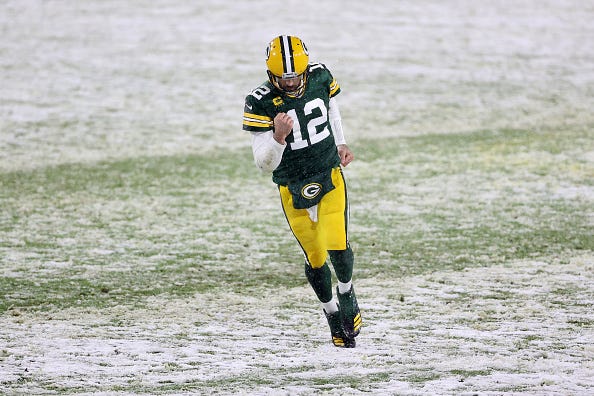 Rodgers was the best quarterback this regular season, tossing 48 touchdowns to just five interceptions, likely en route to winning his third NFL MVP Award. At age 37, getting a week off is probably much more beneficial for Rodgers, than, say, 25-year-old Patrick Mahomes. It's mildly concerning that Rodgers and the Packers will return from the bye week and have to face a defense led by Aaron Donald and Jalen Ramsey. But considering they will square off with a less-than-100% Jared Goff, this weekend should turn into a relatively easy victory for Rodgers and company, who are looking to return to the NFC Championship Game for the second consecutive season. 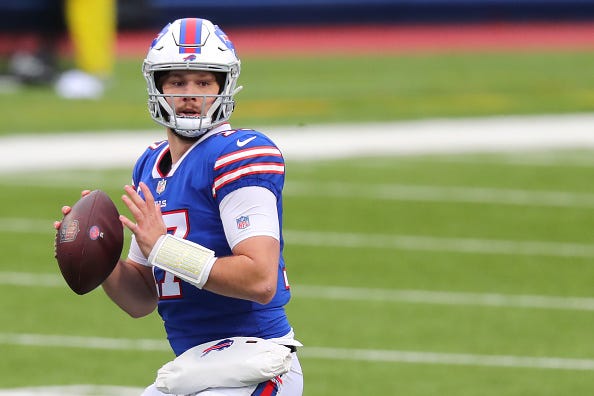 Some will scoff at placing a player that's only played in two postseason games this high, but there's an aura around the Bills right now, a team that's won seven contests in a row and 10 of their last 11. At the forefront of what's been a special season has been Allen, who's become one of the sports most complete quarterbacks. Even in a game that was a little too-close-for-comfort last Saturday, Allen threw for 324 yards and two touchdowns, while leading the team on the ground with 54 rushing yards and a touchdown scamper. As Pro Football Talk's Mike Florio has said all along, Allen's legs are a weapon that the Bills haven't had to unleash as much in 2020 because of the success he's had throwing the ball, but such a possibility looms as we get later into January. 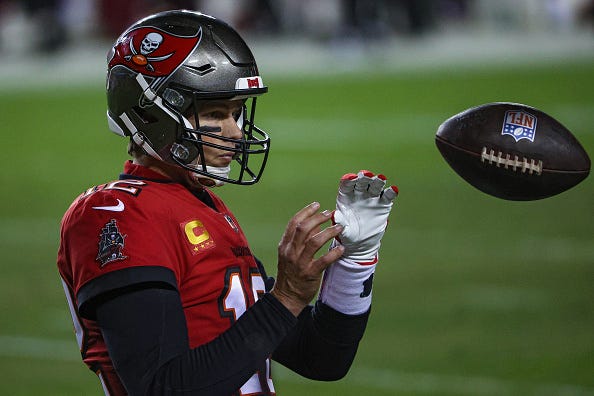 Brady, the most successful postseason quarterback in NFL history, isn't as his peak, but make no mistake, the 43-year-old is still playing at an extremely high level. This week, though, he'll be tasked with defeating a New Orleans Saints team that outscored his Tampa Bay Buccaneers 72-26 in two regular season losses. Notably, though, Brady has never lost to the same team three times in one season, and as the Buccaneers seemingly peak at the right time, the guess here is the Saints won't become the first team to do that. 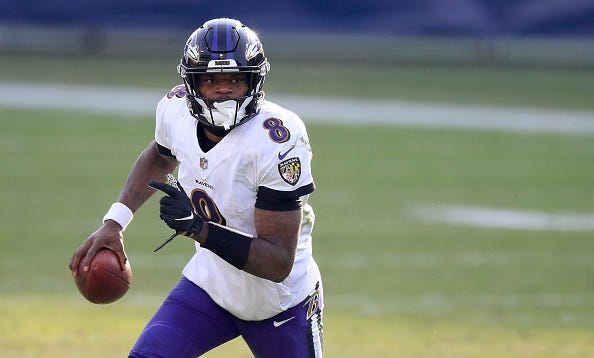 Jackson and the Ravens fell down 10-0 against the Tennessee Titans in Super Wild Card Weekend, only to storm back and win 20-13, giving Jackson his first career postseason win. Jackson was dominant on the ground, rushing for 136 yards and a touchdown, but he'll need to be much better through the air this week if the Ravens are going to upset the Bills in Buffalo. 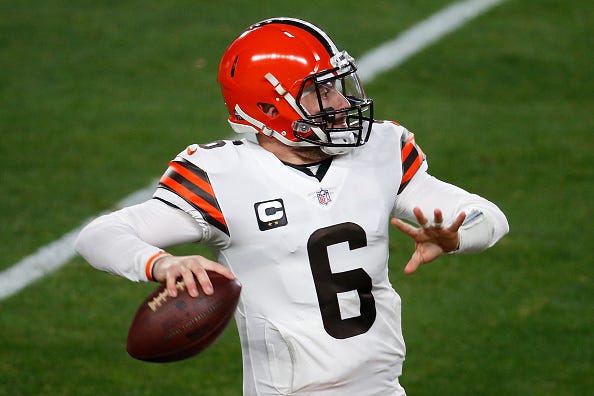 Mayfield was excellent in his first postseason start, tossing three touchdowns in a 48-37 victory over the Pittsburgh Steelers. He'll get his head coach back this week, just in time to face Patrick Mahomes and the Kansas City Chiefs. The Browns as a team are 10-point underdogs, so they face an uphill battle in attempting to extend their season. Still, Mayfield has played at a high enough level in his third season that we'd rather have him this weekend in a neutral setting, as opposed to two other quarterbacks whose teams may have a better chance to win. 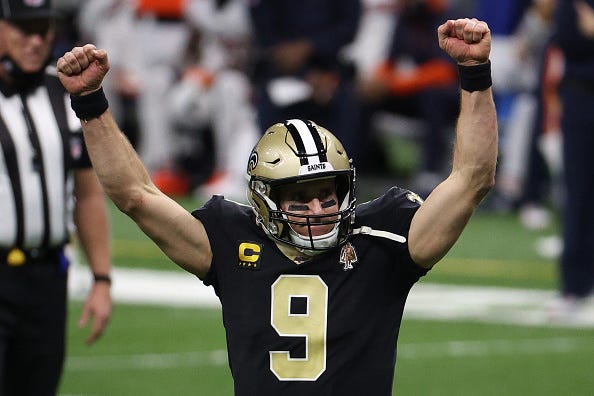 Brees is one of the 10 greatest quarterbacks in NFL history, and from a statistical sense, he's even more accomplished. However, this list isn't about career achievements, it's about who you'd prefer to have if you needed to win a game this weekend. Brees' next loss may very well be his last, and that's because he just turned 42 and his arm-strength is greatly diminished. Brees can still be part of a postseason win, but the Saints will likely have to lean on Alvin Kamara and Michael Thomas - perhaps with a mix of Taysom Hill - to win this weekend and make a Super Bowl run. 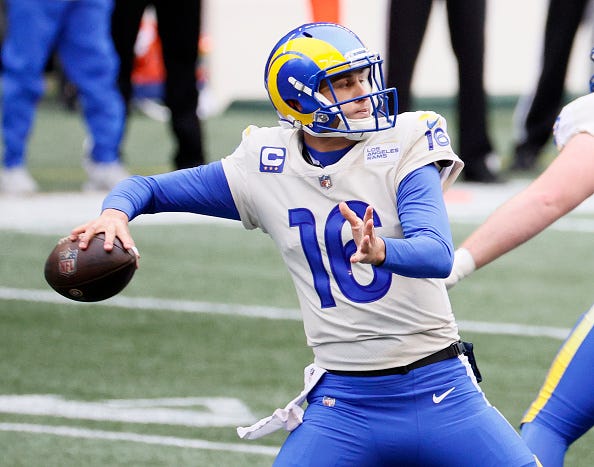 It's strange for a quarterback two seasons removed from reaching the Super Bowl to find himself at the bottom of this list, but Goff's regular season was a mixed bag and he's just a couple weeks removed from surgery on the thumb on his throwing hand. If the Rams are going to upset Aaron Rodgers and the Packers, it's going to be because Aaron Donald and Jalen Ramsey stymied Green Bay's offense, leaving Goff and company the opportunity to make just enough plays to win a 23-20 game.