Wild Card Weekend certainly lived up to its namesake in just the first game to kick off the NFL playoffs.

The Houston Texans and Buffalo Bills opened the postseason in a thrilling, yet messy classic. The Bills jumped out to a 16-0 lead, only to squander it away in the second half, and finally lose it completely in overtime in a 22-19 loss to the Texans.

The Bills remain winless in the postseason since the 1994 postseason while Deshaun Watson gets his first career playoff victory.

But getting to that point was a roller-coaster ride of dramatic swings and head-scratching moments.

In fact, it seemed as if there were more unusual circumstance in this game than your average NFL game.

We took a look at the five most bizarre and unusual moments of the Wild Card opener.

WHAT A START FOR THE @BUFFALOBILLS.

John Brown throws to @JoshAllenQB for the TD! #GoBills

The Buffalo Bills wasted no time in getting the playoff juices flowing, opening the game with a six-play scoring drive that was capped with a trick play of Josh Allen pitching the ball to receiver John Brown, who then threw the ball to Allen down field for a 16-yard touchdown. Many on Twitter dubbed it the "Billy Special," due to its similarities to the “Philly Special” from Super Bowl LII. It gave the Bills a 7-0 lead and made Allen was the team’s leading receiver and rusher, while Brown was the leading passer.

Josh Allen really went for the lateral while being tackled 🤯 pic.twitter.com/TCAJh7FlTA

With the Bills trailing by three and just a minute left, Allen was tasked with getting the team into field goal range but he almost threw away the game — literally. On the first play of the drive from their own 30, Allen took off with the ball and looked like he was ready to put the team on his back. As he got to midfield, he attempted a lateral to tight end Dawson Knox while he was being tackled. The ball sailed over Knox’s head and he knocked it out at the 48-yard line. Fortunately for Allen, he was able to get the team into field goal range and tie the game and send it into overtime, but it could have very well been a costly bone-headed mistake.

Did I just watch a punter take a critical snap under center in a playoff game with under a minute left?

In a chaotic moment at the end of regulation, the Bills did not know if they had a first down or if they fell short. The spot of the ball was being reviewed by the booth, but if it remained fourth down, the Bills would have to kick a field goal with time expiring, so Sean McDermott sent his special teams unit onto the field during the review. It was determined it was a first down and the clock restarted immediately. Instead of wasting time to get the special teams unit off the field, the Bills punter/holder, Corey Bojorquez, had to get under center and spike the ball to stop the clock. 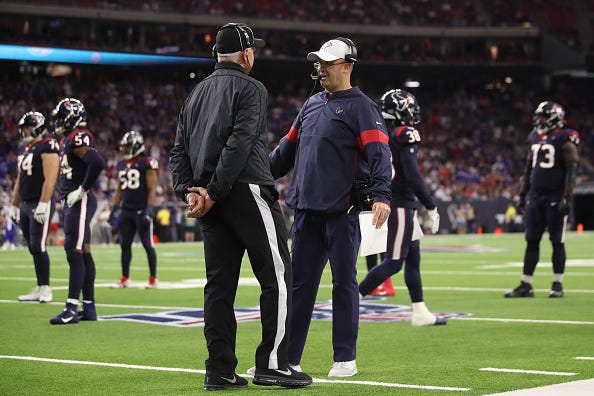 This probably would be the No. 1 story of the weekend had it not been overturned. Texans kick returner DeAndre Carter failed to take a knee or signal a fair catch while receiving the ball in the end zone, so when he tossed the ball away it was still a live ball and the Bills pounced on it for a touchdown. ESPN had even cut away from the field thinking that it was already a touchback and missed the play live. The officials gathered together and determined that Carter gave what is known as a safe signal to his teammates that he was not returning the kick. While that is not technically the fair catch signal, he was given the benefit of the doubt and the officials determined he had given himself up and the play was indeed dead, thus reversing the TD call.

This was perhaps the most mind-boggling coaching decision of the game. After Josh Allen committed intentional grounding on a third-and-long, the Bills were backed up to a fourth-and-27 situation at the Houston 42-yard line. It would have been a 59-yard field goal had they attempted that, or they could have punted and pinned Houston deep in their own territory with all three timeouts remaining and chance to get the ball back in good field position. Instead, the Bills went for it and Josh Allen was sacked for a 19-yard loss and fans were left scratching their heads wondering what the rationale for going for it there was.