The New England Patriots will look to move to 7-0 as they face the division-rival New York Jets on Monday evening. The Patriots and 6-0 San Francisco 49ers are the only two remaining undefeated teams, though this may prove to be a season where the best player on the best team doesn't win the NFL MVP Award.

The 49ers, led by a defense that's given up just 10 points in the last three games, don't have an obvious NFL MVP candidate. The Patriots employ arguably the greatest player in NFL history, but while Tom Brady is having another strong season, he's a bit behind in terms of the statistical leaders in 2019. 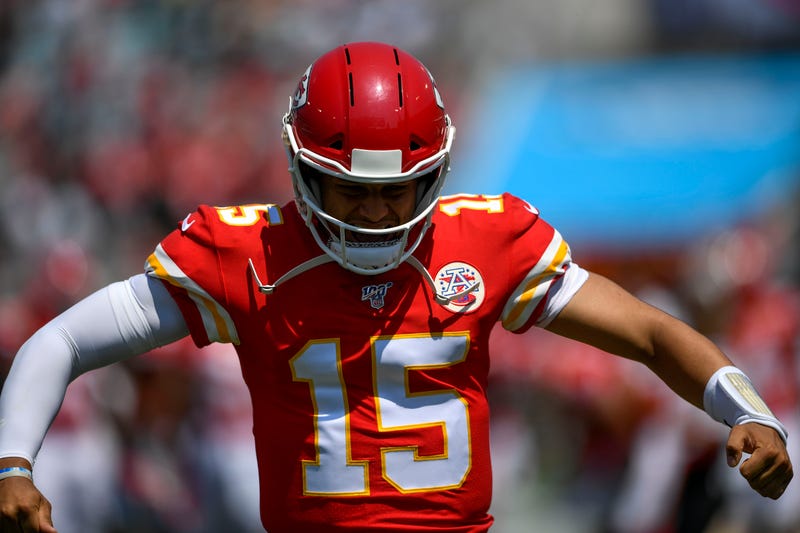 Prior to his injury, Patrick Mahomes had another strong start in 2019. Photo credit (Douglas DeFelice/USA Today Images)

Let's start with this: Patrick Mahomes almost certainly isn't going to win the 2019 NFL MVP Award after suffering a dislocated kneecap that's likely going to cost him at least a couple games. But through the first seven weeks, the reigning NFL MVP has again been the best individual player in the sport.

Mahomes - despite only taking 11 snaps in the Kansas City Chiefs Week 7 win over the Denver Broncos - leads all quarterbacks with 2,180 passing yards and 15 touchdowns. He's been intercepted just one time.

No player has won back-to-back NFL MVP Awards since Peyton Manning did it in 2008 and 2009. Due to his injury, Mahomes' chances at repeating as NFL MVP are greatly damaged. But it would be shocking if, at some point in his career, the 24-year-old doesn't win consecutive NFL MVP Awards. 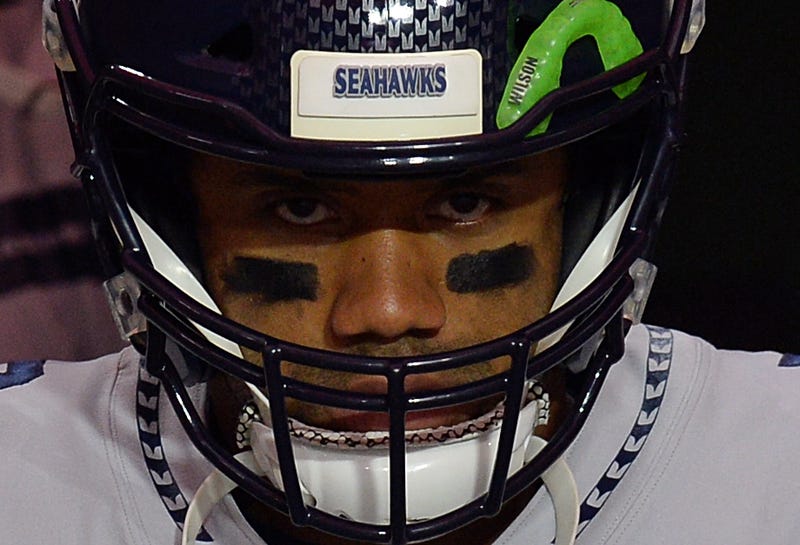 Russell Wilson is having the finest season of his career. Photo credit (Joe Camporeale/USA Today Images)

Had Russell Wilson and the Seattle Seahawks defeated the Baltimore Ravens at home on Sunday, there's a very real chance that the 30-year-old would have jumped to No. 1 on this list. Instead, they lost 30-16, with Wilson throwing a rather inexplicable pick-six to new Raven Marcus Peters.

Still, he's at No. 2 (and in position to be the favorite after Mahomes' injury) for a reason. Wilson is tied with Mahomes for the NFL lead in touchdown passes at 15, has 1,945 passing yards and also has thrown just one interception. Wilson's career was on a Hall of Fame track before 2019 - but this is proving to be his most dominant individual season.

One thing worth monitoring; after Sunday's loss, the Seahawks are 5-2. They play in a division where the San Francisco 49ers are 6-0, the defending NFC Champion Los Angeles Rams are 4-3 and even the Arizona Cardinals have won three straight. Right or wrong, Wilson may need to lead his team to the NFC West title to ultimately win the award. 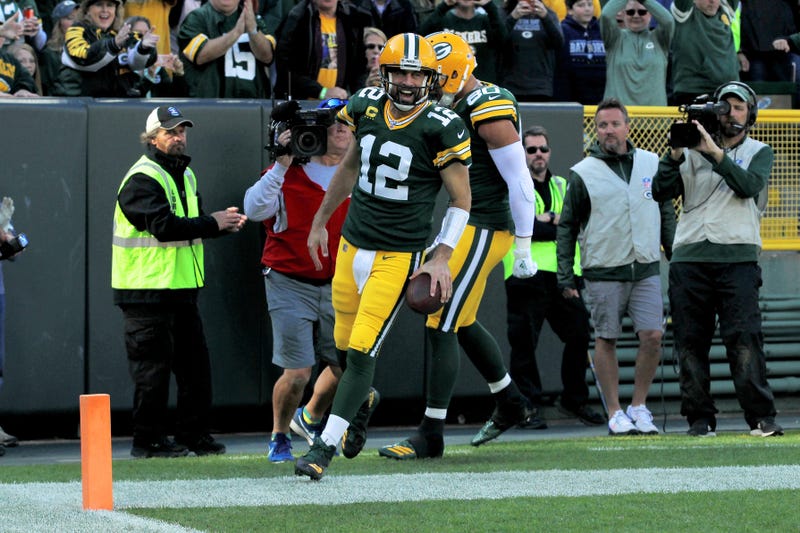 Aaron Rodgers and the Packers are off to a scorching-hot start. Photo credit (Dylan Buell/Getty Images)

Through seven games, Rodgers has 2,019 passing yards, 13 touchdowns and two interceptions. After perhaps the most trying season of his professional career in 2018, Rodgers is off to one of the best starts of his illustrious career.

And here's the thing; to win the NFL MVP, you have to get a narrative going. The narrative of Rodgers leading the Packers to a first-round bye in the NFC playoffs a year after his team went 6-9-1 may propel him to his third NFL MVP Award. Only five players have won three NFL MVP Awards in their careers, and the only ones that aren't in the Pro Football Hall of Fame are Peyton Manning and Tom Brady, both of whom are locks, like Rodgers, to eventually end up in Canton. 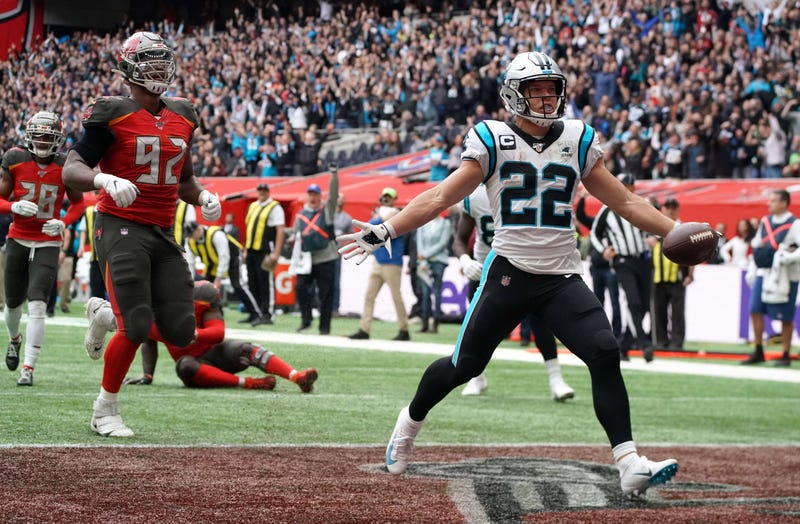 Christian McCaffrey has had an incredible first half of the 2019 season. Photo credit (Kirby Lee/USA Today)

In the last 20 seasons, just four running backs - Marshall Faulk, Shaun Alexander, LaDanian Tomlinson and Adrian Peterson - have won the NFL MVP Award. That quartet feels unlikely to welcome a new member in 2019, but if they do, it'll almost certainly be McCaffrey.

The Carolina Panthers were on their bye week in Week 7, but the third-year pro out of Stanford has rushed for 618 yards and seven touchdowns through the Panthers first six games of 2019. Additionally, he also has hauled in 35 passes for 305 yards and two touchdowns.

Former NFL MVP Cam Newton could return soon, but the Panthers have won four games in a row without him and find themselves very much in the playoff picture in the NFC. While Kyle Allen has done an admirable job in Newton's absence, the Panthers have leaned heavily on McCaffrey, and he's rewarded them for doing so. 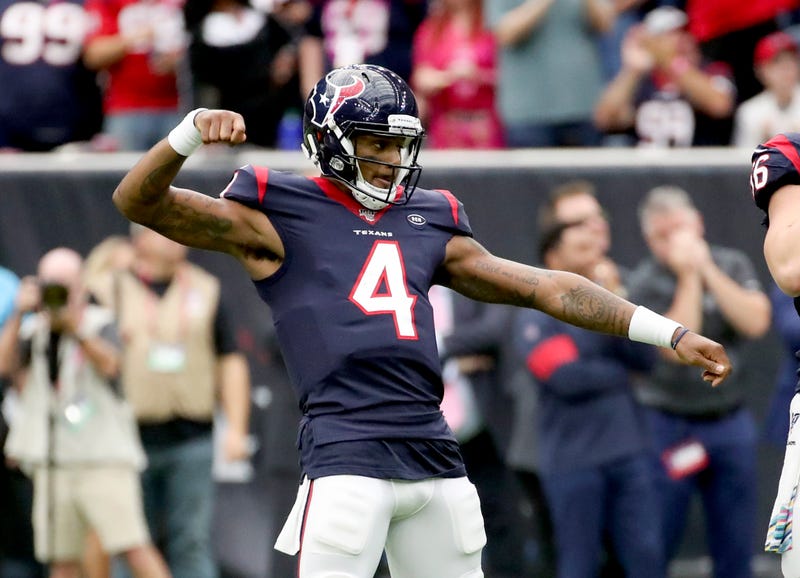 Deshaun Watson has established himself as one of the game's elite quarterbacks in 2019. Photo credit (Kevin Jairaj/USA Today)

The Deshaun Watson MVP narrative lost a little steam Sunday, when the Texans lost 30-23 to the division-rival Indianapolis Colts, allowing the Colts to leapfrog them in the AFC South.

A temporary setback in the division aside, Watson has developed into one of the NFL's best quarterbacks in 2019. With a bevy of options to throw the ball to, Watson has thrown 13 touchdowns to five interceptions, tallying 1,952 yards through the air. He's also rushed for five touchdowns.

Only eight players in NFL history have won both the Heisman Trophy and NFL MVP Award. At 24, Watson is a candidate to become the ninth, whether it's in 2019 or the future.