Ahead of the 2020 NFL season, RADIO.COM Sports will rank the top 33 quarterbacks in the sport currently in a six-week series. Though this countdown will factor in past accomplishments, it's largely designed to identify the 33 best players at the position currently slated to be on a roster for the 2020 season.

Editors Note: This countdown was started before the New England Patriots signed Cam Newton and the parameters have been updated to reflect that the former NFL MVP is now in the league again. 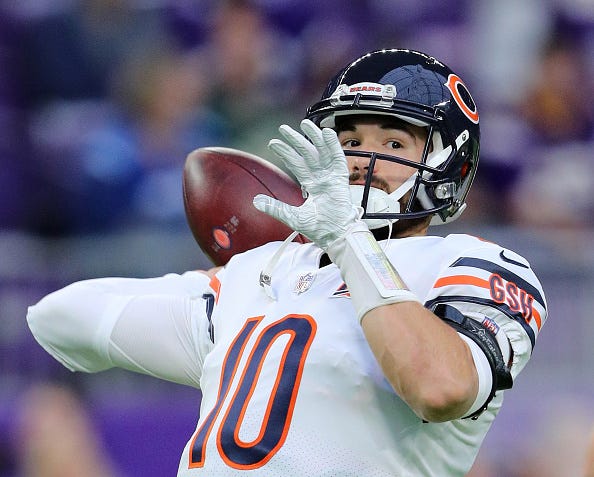 The problem in evaluating Trubisky for the 2020 season is that it's hard to envision a best-case scenario for the former No. 2 overall pick.

The most likely scenario is that offseason acquisition Nick Foles will be the Bears' Week 1 starter. It's certainly not impossible that Foles slips up and Trubisky is re-inserted as the starter at some point, but what would that really guarantee beyond him getting to make a few more starts?

Two seasons ago, Trubisky was a Pro Bowler and the Bears were the most unfortunate kick in NFL history away from winning a playoff game. Even then, there were still serious questions about Trubisky. The Bears declined Trubisky's fifth-year option, and even if he has some level of success in 2020, it's hard to imagine the Bears extending him or retaining him using the franchise tag. 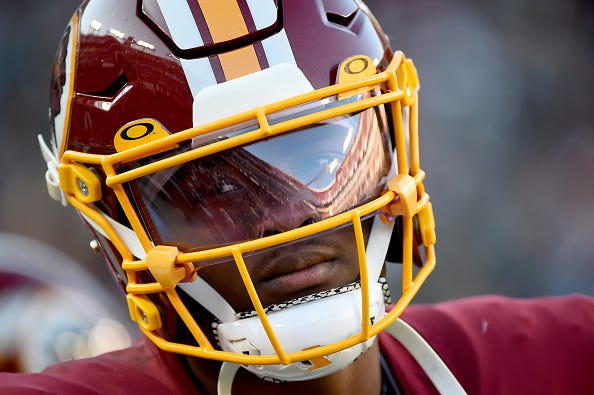 After Washington used the No. 15 pick in the NFL Draft on Haskins, a coach that didn't particularly want him - and eventually got fired in the middle of the season - helped to turn his rookie season into a wash.

Haskins did play relatively well in his final two starts of the season, but it's hard to take away a ton from his rookie season one way or another. It appears the former Ohio State signal caller will get a chance to open the season as Washington's starter, but it's hard to know exactly how long his leash will be.

Ron Rivera should bring much-needed stability to the Washington organization, but both he and the team's re-tooled front office don't have a ton in the way of loyalty to Haskins. If he doesn't get off to a hot start in an offense devoid of much talent, offseason pickup Kyle Allen could be inserted. 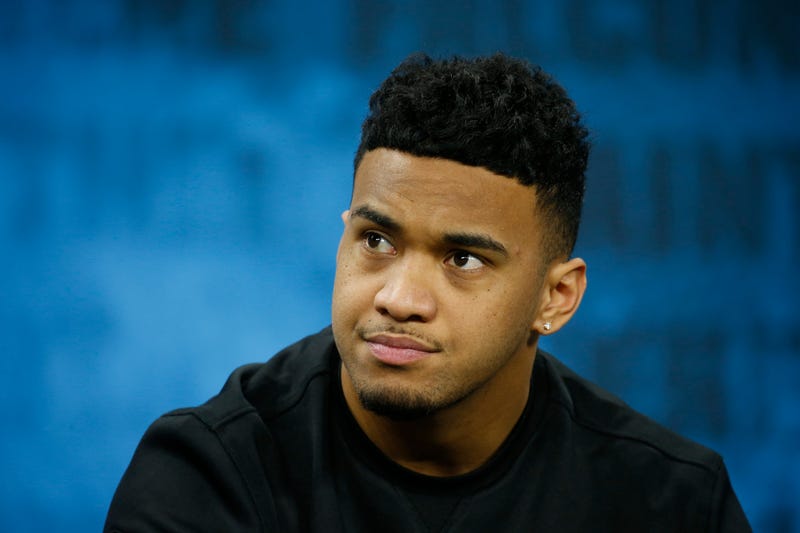 Tagovailoa was one of the hardest quarterbacks to place on this countdown.

First of all, there's a very real possibility that Ryan Fitzpatrick - an honorable mention for this countdown - opens the season as the team's starter. Secondly, as much as it appears that the No. 5 overall pick has made a pretty miraculous recovery from the hip dislocation that he had surgically repaired last November, we're yet to see him in anything even resembling game action. Thirdly, for as much as there's legitimate excitement about the Dolphins' future under Brian Flores, they're still a very young roster.

Still, Tagovailoa is one of the most accomplished NCAA quarterbacks in recent memory and has skills that remind you of Drew Brees, Russell Wilson and Kyler Murray. If he's able to stay healthy, this will almost certainly be too low for him. 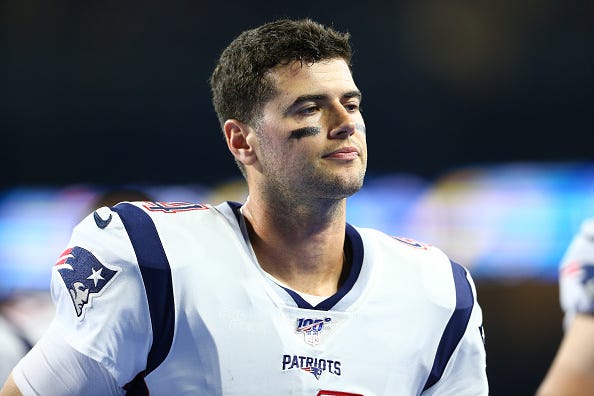 It's about as unenviable of a task as possible to replace Tom Brady, right? But given that the only quarterback that the Patriots added this offseason was Brian Hoyer, there appears to be immense confidence in the second-year pro. Bill Belichick and Josh McDaniels have earned the benefit of the doubt, right?

It is concerning, though, that Stidham's first season as New England's starter will come with a group of offensive skill-position talent that was extremely underwhelming in 2019. Maybe N'Keal Harry will make a jump in his second NFL season, and one of the two tight ends they drafted in the third round - Devin Asiasi and Dalton Keene - will have a star rookie season. But the team is unquestionably retooling - if not altogether rebuilding - offensively, both in terms of skill positions and the offensive line. Stidham will have to be successful despite that.

Stidham, a 2019 fourth-round pick, had some very nice moments at Auburn and in the 2019 preseason. We'll see if that begins to translate into him being the next franchise quarterback in New England. 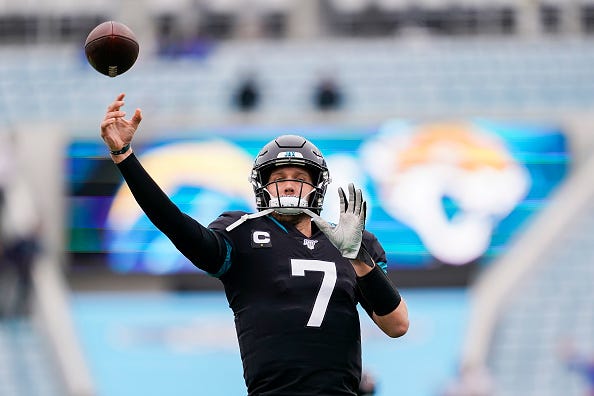 Foles, quite literally, has had one of the strangest career arcs in the history of professional sports.

After signing a four-year/$88 million deal to become the starter in Jacksonville last season, he broke his collarbone in Week 1 and was unable to get hot in the three starts he got after he returned. Just over 365 days after being guaranteed over $50 million by the Jaguars, Foles was traded to the Bears, where he'll compete with Mitchell Trubisky for the starting job in 2020.

The thing about Foles is when he's on - see: Super Bowl LII - he has moments that make him look like an elite NFL starter. When he's not on, he doesn't look like an NFL starter at all. And there hasn't been much of an in between during his eight seasons in the league. If the Bears get the good Foles - and he's able to stay healthy - they could easily push for the postseason with an elite defensive unit. 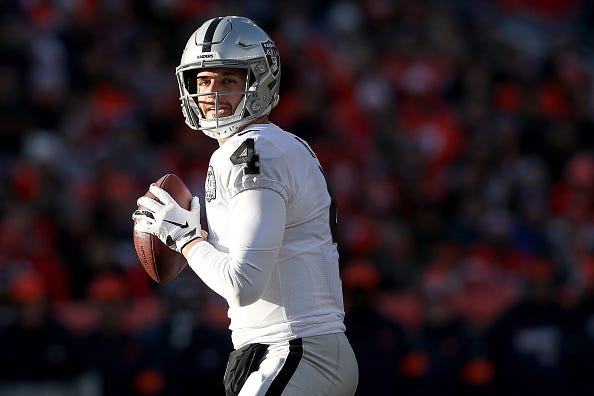 Carr made it to Las Vegas and is still the starting quarterback for his new neighbor Jon Gruden, though it doesn't appear that the Raiders feel any sort of sense of commitment to the three-time Pro Bowler.

The 29-year-old was pretty efficient a season ago, but far from overwhelming. The Raiders added the blazing-fast Henry Ruggs III with the first of two first-round picks in the NFL Draft, and he'll join a budding group of offensive talent that also includes Josh Jacobs and Darren Waller.

Still, by going 7-9 last season, the Raiders probably overperformed the talent level of their roster. Now, there's an expectation that they'll continue to take a step forward even though they probably have the worst roster of the four teams in the AFC West. With Marcus Mariota in the fold and minimal guaranteed money left on his deal after this season, it's entirely possible that Carr will be one and done in Vegas. 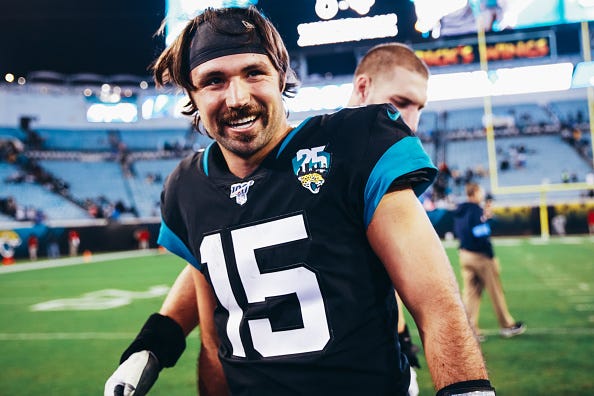 Was 2020 the start of a prolonged career as an NFL starter for Minshew, or just an indication that he'll have a Ryan Fitzpatrick-type career where he thrives for a few games a year as a star backup?

That's the question facing the Jaguars, who moved on from Nick Foles this past offseason to assure there wasn't a question about whether Minshew would be the starter in 2020. (That said, they continue to make sense as a destination for Cam Newton.)

There's some thought that the Jaguars may be attempting to bottom out in 2020, with eyes on landing either Trevor Lawrence of Justin Fields in the 2021 NFL Draft. That said, what we saw from Minshew last season maybe doesn't suggest he's going to be an All-Pro, but it leads you to think that the Jaguars are unlikely to finish with the worst record in the sport in 2020, especially when you factor in that they had a strong draft.