Even if it doesn't feel like it, we're just over a month until the 2020 NFL season is slated to kick off. With that, we'll conclude our quarterback countdown with the top 10 today. Before we get to that, here are entries 33 through 11:

Without further ado, here are RADIO.COM Sports' top 10 quarterbacks for the 2020 NFL season: 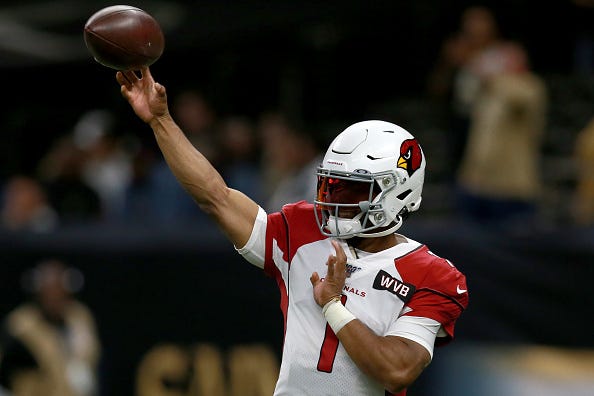 The Cardinals were a franchise that was so devoid of talent after the 2018 season that it looked like it would be a half decade before they could legitimately contend again. Yet, in the deepest division in the sport, Murray led the Cardinals to five wins in his rookie season, and gave the team chances to win against the San Francisco 49ers and Baltimore Ravens, arguably the two best rosters in the sport. In year two of the Murray/Kliff Kingsbury era, the Cardinals will have a full season of Kenyan Drake, who averaged 5.2 yards-per-carry after being acquired from the Miami Dolphins midseason. What's more, the team acquired DeAndre Hopkins, arguably the best wide receiver in the NFL, to pair with the still-effective Larry Fitzgerald. Their secondary remains a concern that could keep them from seriously competing for the NFC West title, but with seven playoff spots in the NFC, it's not hard to imagine the Cardinals sneaking into the playoffs if Murray builds on an excellent rookie season. 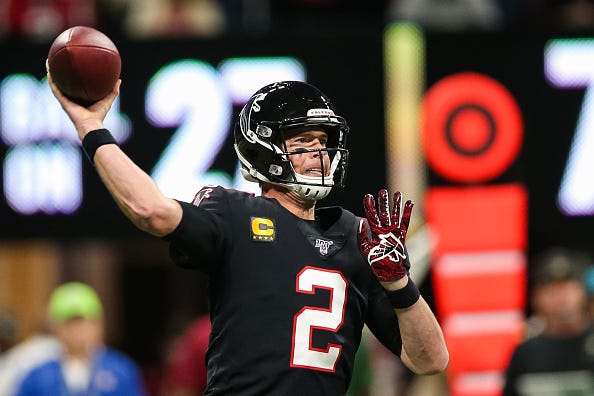 The Falcons invested in the defense in this past NFL Draft, using their first two picks on cornerback A.J. Terrell and defensive tackle Marlon Davidson. They continued to attempt to upgrade the offensive line in front of Ryan in the third round, drafting center Matt Hennessy. Their draft strategy was wise, because Ryan has continued to play at an elite level over the past two seasons, even as other areas of the team have disappointed. Certainly they took a risk betting on the health of Todd Gurley and it burns to have lost Austin Hooper in free agency, but Ryan is still surrounded by Julio Jones, Calvin Ridley and Hayden Hurst, looking to avoid the bust label after a disappointing stint in Baltimore. With both the New Orleans Saints and Tampa Bay Buccaneers making notable upgrades to their roster this past offseason, it's hard to know if the Falcons, who did go 6-2 in their final eight games last season, can legitimately compete for the playoffs. But Ryan, now 35, has tossed 61 touchdowns over the past two seasons. There's no reason to think he'll take any sort of step back individually in 2020. 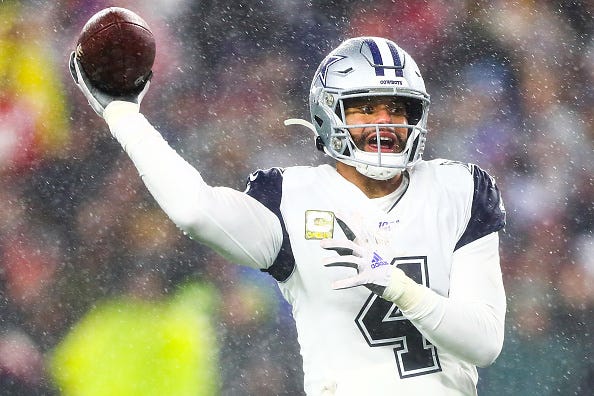 It's legitimate to be concerned about Prescott having a less-than-ideal offseason - both from a contract status and because of COVID-19 - ahead of his first season in Mike McCarthy's offense. That said, the Cowboys re-signed Amari Cooper, and had CeeDee Lamb, arguably the most talented running back in this year's class, fall to them in the NFL Draft. Michael Gallup also quietly had over 1,100 receiving yards a season ago. Ezekiel Elliott remains one of the NFL's elite running backs. After losing Travis Frederick and Byron Jones this offseason, it's difficult to know if the Cowboys' ceiling is any higher than potentially winning the NFC East. But Prescott, set to play on the franchise tag this season, figures to set himself up extremely well financially, almost regardless of what the Cowboys do as a team in 2020. 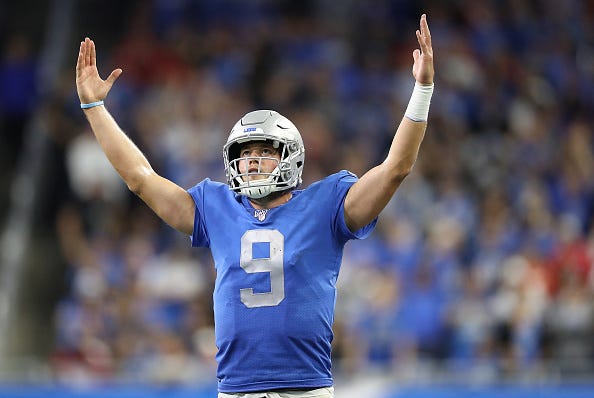 Matthew Stafford had a strong first half of the 2020 season. Photo credit (Leon Halip/Getty Images)

To some more casual observers of the sport, this may be a shocking placement. It shouldn't be, though. Before a back injury cost him the second half of the 2019 season, Stafford was playing at an All-Pro level in his first season in Darrell Bevell's system. In eight games, Stafford had thrown for nearly 2,500 yards, 19 touchdowns and just five interceptions. Stafford led the Lions to a win in Philadelphia in Week 3, and the Lions very nearly upset the eventual Super Bowl Champion Kansas City Chiefs in Week 4. If not for poor officiating, the Lions would have defeated the Packers in Green Bay on Monday Night Football in Week 6.

The team collapsed without Stafford in the second half of the season, a sign of how valuable he is to the organization and how poorly Matt Patricia's defense played in 2019. We'll wait and see if defensive issues have been corrected, but a healthy Stafford has Marvin Jones Jr. and Kenny Golladay, one of the best wide receiving duos in the NFL, to throw to. Tight end T.J. Hockenson also looked like a star in the making when he was able to stay healthy in 2019. In his second year in this system, the Lions also added D'Andre Swift to the backfield, a running back that reminds us some of LeSean McCoy.

Historically, betting on the Lions franchise to be competent hasn't been a smart bet. However, we can very easily see a scenario where they go from worst to first in the NFC North this year, and Stafford is an MVP candidate. 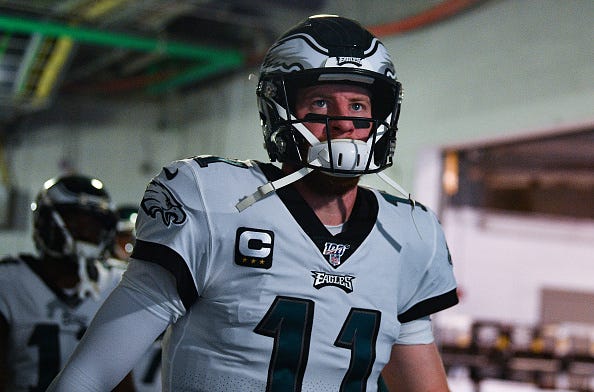 It's impossible to entirely discount issues Wentz has had staying healthy over the course of his first four NFL seasons, or the fact that he's fumbled at a rather alarming rate to this point. It's even harder, though, to overlook that Wentz took a team greatly devoid of offensive talent to the postseason a year ago, a feat that maybe only a handful of quarterbacks in the NFL are capable of. Wentz rarely throws interceptions, as he's averaged just seven per year of the last three seasons. Completely back from his December 2017 ACL tear, the 27-year-old seemed to get his legs back completely under him in 2019. The Eagles used their first-round draft pick on wide receiver Jalen Reagor, and believe that the still-electric DeSean Jackson is healthy. Zach Ertz, Dallas Goedert and Miles Sanders remain in the fold of what should be an improved offense in 2020, which bodes very well for Wentz. 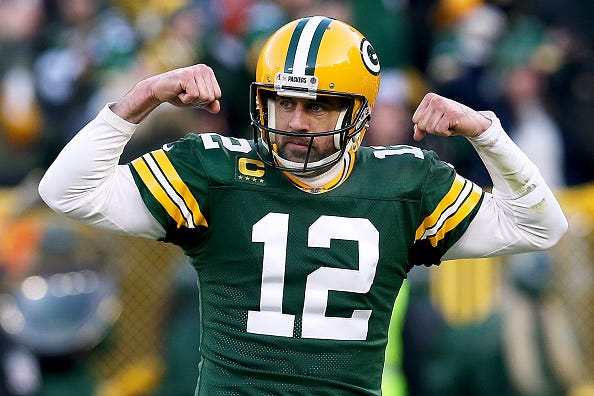 Aaron Rodgers is one of the greatest quarterbacks in NFL history. Photo credit (Dylan Buell/Getty Images)

The Packers went 13-3 in 2019, but were never seen by most as a legitimate contender to win the Super Bowl. Make no mistake, the first year of the Matt LaFleur era was very successful, but it did feel as though it lacked the usual amount of jaw-dropping plays from Rodgers. The future Hall of Famer still threw 26 touchdowns to just four picks, so if 2019 disappointed anyone, that's just another indication of how high he's set the bar. However, Rodgers is now 36, and the Packers did next-to-nothing to upgrade a wide receiving corps that doesn't inspire you a ton after you get beyond Davante Adams. With the team using their second-round pick on running back A.J. Dillon, you get the sense that LaFleur really wants to lean on the running game moving forward, with Aaron Jones having had a big year in 2019. Rodgers will still offer glimpses of his peak self in 2020, but as he ages and the Packers build their team in a way that isn't conducive to consistently winning games through the air, he's perhaps started to fade out of the discussion for best quarterback in the sport. 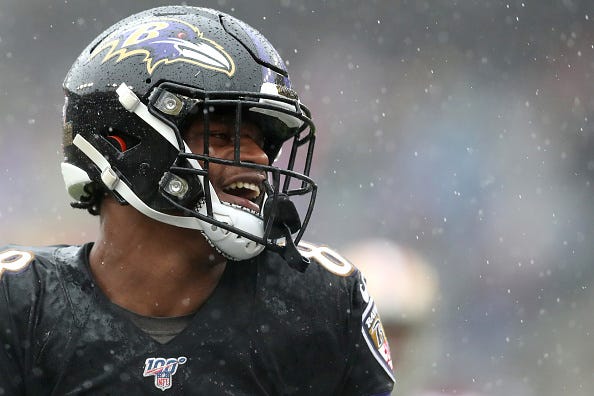 Questions about the sustainability of his style - both in a single season and over the course of his full career - will probably follow Jackson as long as he's in the league. What we know, though, is that the reigning NFL MVP is coming off one of the most complete seasons a quarterback has ever had. In his second NFL season, Jackson led the NFL with 36 touchdown passes, and set a new quarterback record with 1,206 rushing yards. The Ravens did him a favor by adding former Ohio State running back J.K. Dobbins in the second round, as he'll join a backfield that already included Mark Ingram and Gus Edwards. The Ravens are going to line up and smack you in the mouth. To this point, no one has been able to stop them, at least in the regular season. 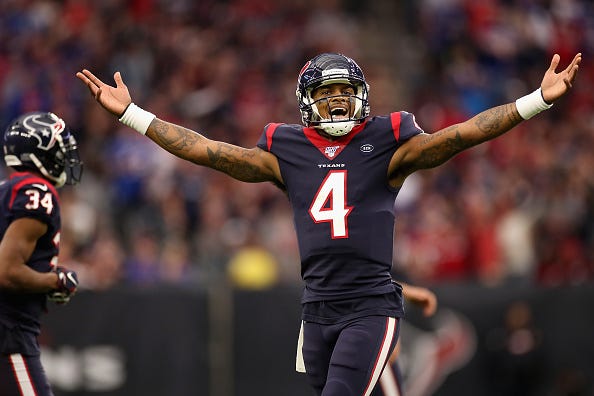 Deshaun Watson is one of the best quarterbacks in the NFL. Photo credit (Christian Petersen/Getty Images)

The "it" factor that Watson demonstrated during his collegiate career at Clemson has shown itself in his first three NFL seasons, despite front office turmoil, controversial trades and a pretty underwhelming group of offensive line talent. Over the past two seasons, Watson has tossed 52 touchdown passes, while rushing for 12 more. Gone is his favorite target - DeAndre Hopkins - who was traded to the Arizona Cardinals this offseason. Still, if healthy, the wide receiving corps of Will Fuller V, Brandin Cooks, Kenny Stills and Randall Cobb is hardly anything to scoff at. Regardless of what happens around him, it feels like a pretty safe bet that Watson will find a way to lead the Texans to the postseason in 2020. 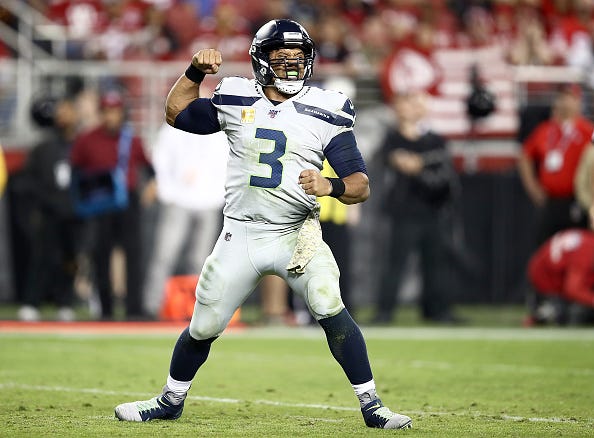 It's unfortunate for Wilson that he put together his best season to date in a year where Jackson had one of the most uniquely dominant NFL seasons ever. Wilson, as he has for some time now, played at an MVP caliber in 2019, tossing 31 touchdowns to just five interceptions. Though he leans less on it than he did early in his career, Wilson has mastered the art of scrambling without putting himself in harm's way. From here, Wilson, entering his age-32 season, has all-but cemented himself as a Hall of Famer. The question now is just how high he climbs on the all-time list of quarterbacks. 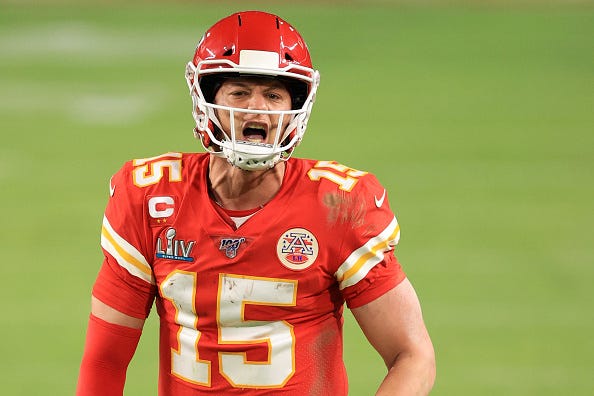 Patrick Mahomes has had an unfathomable start to his NFL career. Photo credit (Andy Lyons/Getty Images)

If Aaron Rodgers was the next evolution of Brett Favre, it feels like Mahomes has managed to take the best of both legends and put himself in position after just two seasons of starting to be considered one of the most dominant players in NFL history. It's probably unfair to expect anyone to match the six Super Bowl titles that Tom Brady has won, especially as Brady is still active and able to add to that number. What we know, though, is there's never been anything quite like what Mahomes has done over the past two seasons, and you get the feeling that he's just getting started.