The 21-year-old Alabama quarterback made the announcement on Jan. 6 that he will forego his senior season with the Crimson Tide and pursue a career in the NFL.

Tagovailoa will certainly be an interesting player to follow in the coming months. The southpaw was projected to be the No. 1 overall pick until he dislocated and fractured his right hip on Nov. 16 against Mississippi State.

The injury, combined with the historic season LSU QB Joe Burrow compiled, dropped Tagovailoa out of that projected top spot, but not necessarily out of the first round.

In fact, many mock drafts and analysts are still projecting Tagovailoa to be a mid-to-early first-round pick.

Of course, there are still going to be questions about where he is in his recovery, which could cause him to slide even further, or move up some more if things are going well.

With the first 24 picks of the 2020 NFL Draft set, and plenty of them being quarterback-needy teams, we explored which teams could potentially draft Tagovailoa. 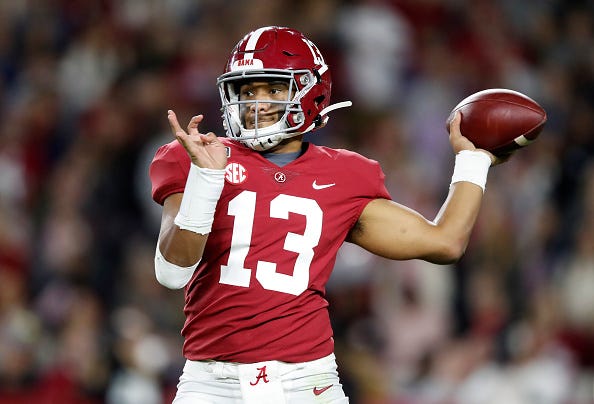 The Dolphins were the original #TankforTua team, and despite winning five games and ruining their chance at the No. 1 pick, they still could end up with Tagovailoa with how things worked out. The Dolphins hold the fifth overall pick, and have two other first-round picks, too. So if they are absolutely in love with Tagovailoa, and they fear a team could leapfrog them in the draft, they have an arsenal of picks to lay on the table and trade up if necessary to get their guy. It’s hard to see the Dolphins missing out on Tagovailoa unless they prefer Oregon’s Justin Herbert or have fears about Tagovailoa’s durability. 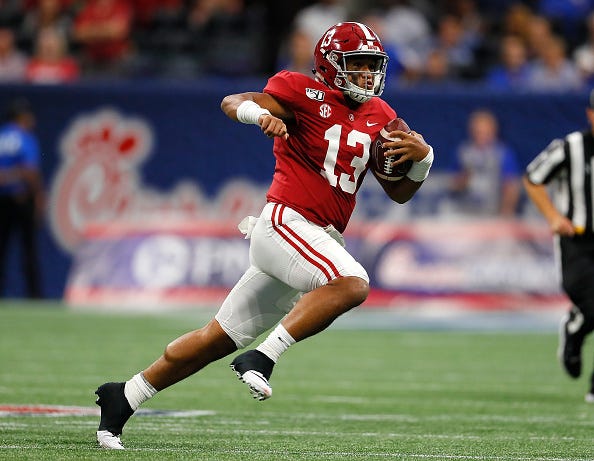 Tua Tagovailoa runs for a first down for Alabama. Photo credit Getty Images

The Philip Rivers era appears to be over for the Chargers. Rivers is 38 years old, and his contract expires right at a time when the Chargers have the sixth overall pick and are in prime position to find their next franchise quarterback after 16 seasons with Rivers. If the Dolphins pass on Tagovailoa, the Chargers are a prime destination for him and give the franchise a quarterback with star potential to market around as they move into a new stadium at the start of the 2020 season. 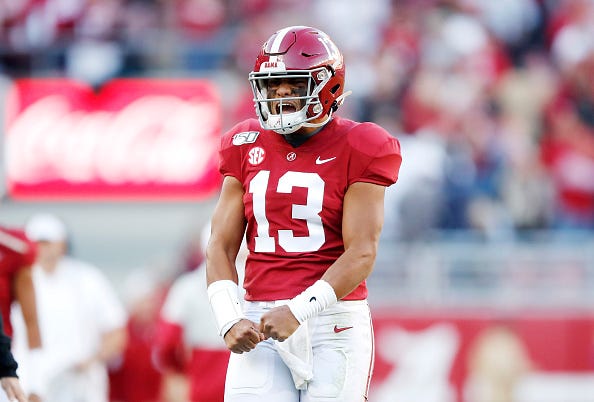 How the Panthers plan to approach the 2020 Draft is going to hinge a lot on who they hire as their next head coach, but the team is in an interesting situation. Cam Newton missed all of last season with a foot injury and is about to enter the final year of his contract. Kyle Allen played pretty well in his absence, but not well enough to erase any doubt that he could be the team’s next franchise quarterback. It is very realistic that the Panthers trade Newton, which leaves them with a decision: roll with Allen or draft another quarterback? If Tagovailoa is there, that kind of potential may be too good to pass up for the Panthers. On the other hand, if Tagovailoa indeed makes it past the Dolphins and Chargers, then there could be some legitimate concerns about his health. 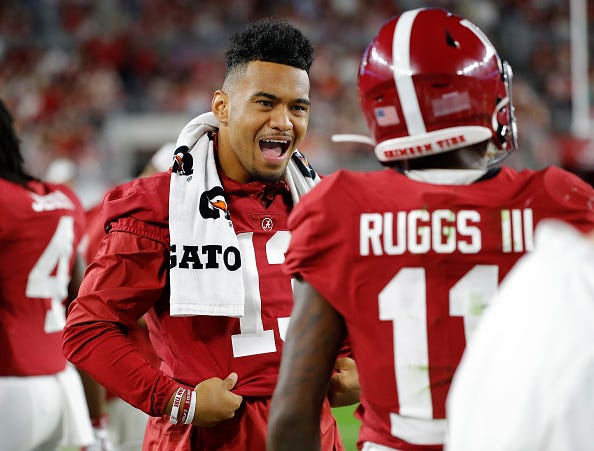 Here is where things could get very, very interesting.
Let’s say Tagovailoa does slide out of the top 10, and then some, could the Patriots swoop in and find their heir apparent to Tom Brady? If Brady retires, the Patriots will need to find their next franchise quarterback and who better than someone who had No. 1 overall potential? If Brady returns for just one more season, Tagovailoa could still be an option — if he is there — where he can spend a season waiting in the wings and getting healthy as he prepares to take over the six-time Super Bowl champion. Even if Tagovailoa does not fall, the Patriots do have some decent draft capital to make a move up. They have nine draft picks and could have as many as four more compensatory picks, too. However, they may need to get a little more creative if they go that route, especially if it’s the Dolphins and their three draft picks they are competing against. 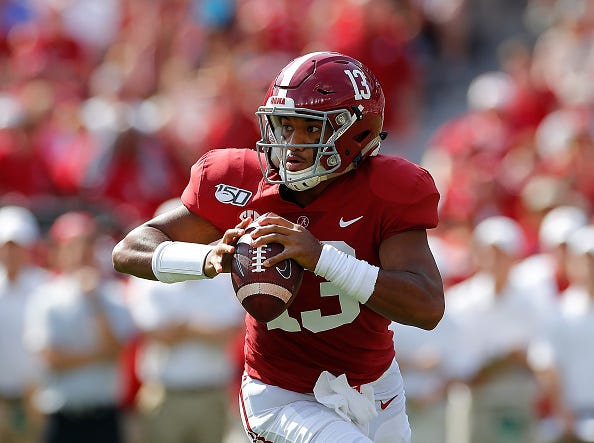 The Saints would essentially be in the same category as the Patriots. If Tagovailoa falls in the draft due to injury concern or whatever reason, the Saints could eye him as the replacement for Drew Brees. Like Brady, Brees is also in need of a new contract and could even potentially retire. Even if Brees returns, Teddy Bridgewater is a free agent and likely gone so they would need a backup and Tagovailoa would be able to wait in the wings as the successor to Brees as well. The only problem is if things play out where Tagovailoa does drop this far and the Patriots are licking their chops, the Saints have just five draft picks and may not be able to move up to get him in this scenario.