As the NFL moves onto the Divisional Round of the playoffs, four teams will not.

Instead, the New England Patriots, Buffalo Bills, New Orleans Saints and Philadelphia Eagles will all turn their attention now to the NFL offseason, where they will dissect what went wrong, what went right and which direction the franchise needs to go in for the 2020 season.

It is a time for reflection, but also about moving forward. We took a quick look at what's next and what plans each team could have in what is sure to be a busy offseason. 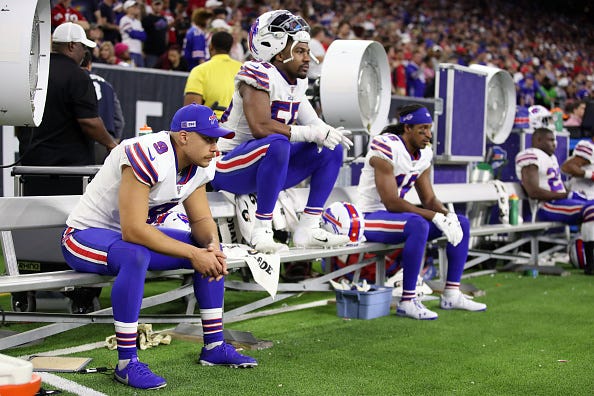 Members of the Bills stare out onto the field after blowing a 16-0 lead to the Texans. Photo credit Getty Images

Despite inconsistent play from Josh Allen and head-scratching decisions from Sean McDermott in the AFC Wild Card game against the Houston Texans, Buffalo is set up for a pretty bright future. They have a franchise quarterback to build around in Allen, a defense that is filled with playmakers like Tre’Davious White and a revamped offensive line. A lot of the Bills’ success will hinge on how much they can improve the passing game. Allen showed he is a dual-threat quarterback, but the Bills passing attack ranked 26th in yards per game. A big part of helping out Allen will be to find a true No. 1 receiver, or at least a receiver with size to create a mismatch with defensive backs. John Brown and Cole Beasley were both reliable options, but they are still missing a piece in the passing game. Expect much of the offseason focus to be on improving the offense. 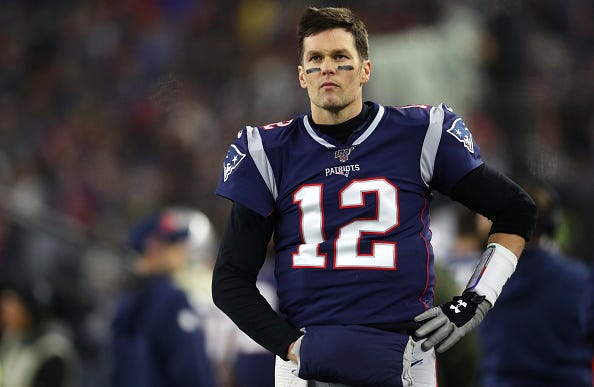 Tom Brady looks on from the sidelines as the Patriots are eliminated from the playoffs. Photo credit Getty Images

The Patriots could very well be at a crossroads as a franchise. First, they have to figure out whether or not Tom Brady is still their quarterback. So, yeah, that’s a pretty big deal. Brady could retire, although he certainly sounds like he still wants to play, but the 42-year-old finally started to show his age in 2019. He threw 24 TD passes — his fewest since 2006 — and barely eclipsed 4,000 yards passing. His 2016 season, in which he was suspended the first four games, was the only season since 2010 where he failed to throw for 4,000 yards. If Brady does return, they need to find receiving help around him. If he does not, then the Patriots need to find a quarterback. A veteran allows them to compete, but a rookie or younger quarterback could mean it’s time for a rebuild — but it’s hard to see Bill Belichick hanging around for that. In the meantime, we wait on Brady for what’s next in New England. 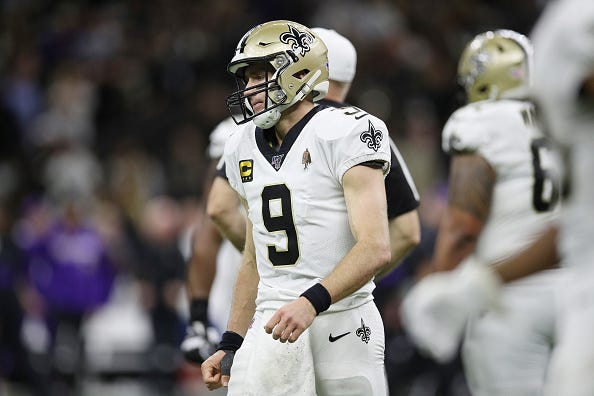 Drew Brees walks off the field after a fumble. Photo credit Getty Images

If you thought last year's playoff loss in the NFC Championship Game was tough to swallow, this one is right up there as well. The New Orleans Saints watched a 13-3 season go by in the blink of an eye after losing to the No. 6 seed Minnesota Vikings. So where do the Saints go from here? Drew Brees, technically, is also not signed for next season. There is not as much chatter about him calling it quits or the Saints parting ways as there is with Brady and the Patriots, but he is about to turn 41 and his window on another Super Bowl is closing. For the Saints, it will be about keeping as many core players on this team together. Von Bell, Andrus Peat, Davis Onyemata and Eli Apple are all set to be free agents. Alvin Kamara could threaten to hold out for a contract extension. The Saints need to mitigate any losses while continuing to build through the draft as they should expect to compete for a Super Bowl again next year. 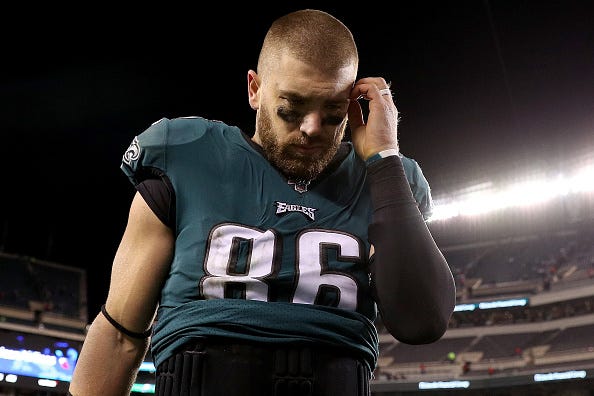 It was not a pretty year for the Eagles, but they somehow made the most of it. They survived a substantial amount of injuries, particularly in the receiving corps, and grinded out wins when it counted to come out on top of a messy NFC East. Then, Carson Wentz went down in the Wild Card loss to the Seahawks and that's where the Eagles' offseason begins — with Wentz. The 27-year-old played 16 games this year, but there will be questions about his durability. This is not to say the Eagles need to draft a quarterback, but they need to have a reliable backup in place.

Wentz actually had an excellent season considering he was playing with practice squad receivers, which brings the Eagles to DeSean Jackson, Alshon Jeffery and Nelson Agholor. Jackson and Jeffery likely stay, while Agholor hits free agency. Finding a younger receiver to join the aging Jackson and Jeffery would be ideal. The Eagles also need to patch up some holes in their secondary, which was exposed throughout the year, especially in the Wild Card game. The good news for the Eagles is they are probably the most stable franchise in the NFC East, which bodes well for their chances of returning to the playoffs.