While Jones has been vocal in voicing the organization's side of negotiations on a new deal, Elliott and the league's current crop of running backs have the support of two of the greatest running backs in NFL history.

"If he doesn't do it right now [push to become one of the highest-paid running backs] when the league is talking about devaluing the running back position and he has proven he can carry the ball 350-plus times on a consistent basis, there aren't many backs in the National Football League that can do that," Emmitt Smith told 105.3 The Fan. "We have one on our team."

While Smith had played out his entire rookie contract before holding out, the landscape of the NFL was different at that time. In 2019, rookie contracts for first-round picks are four years long, with teams possessing a fifth-year option on first-round picks and the ability to franchise tag players twice after the fifth-year option. If Elliott waited until he was allowed to become a free agent, he would be entering his age-28 season, and likely wouldn't have anywhere near the same leverage he has right now, when he's arguably the best running back in the sport. 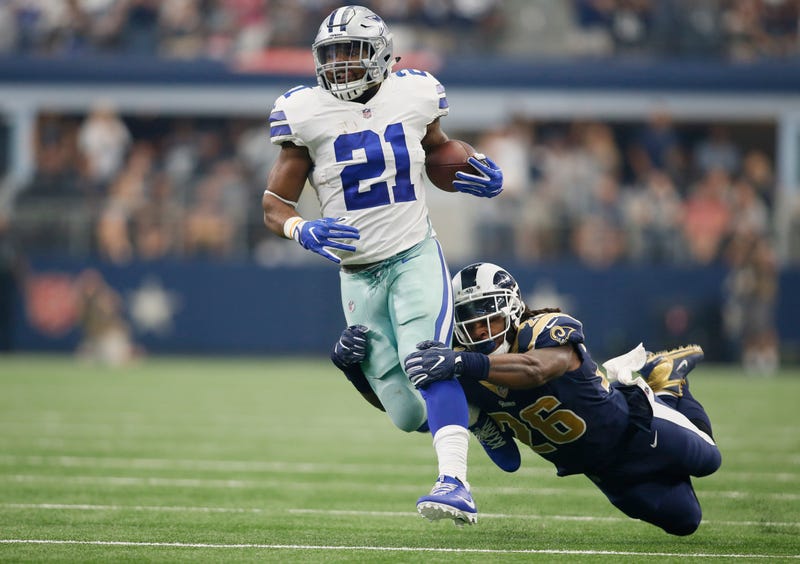 Ezekiel Elliott is in a contract battle with the Cowboys. Photo credit (Tim Heitman/USA Today Images)

Elliott, of course, isn't alone in this fight.

Le'Veon Bell — who wasn't a first-round pick, so his rookie deal didn't have a fifth year — played on the franchise tag in 2017, but refused to do so for a second season in 2018. After sitting out the entire season, the Steelers elected not to place the tag on him again, and he became a free-agent, where he landed a four-year, $52.5 million deal with $27 million guaranteed from the New York Jets.

Los Angeles Chargers running back Melvin Gordon was selected in the first round of the 2015 NFL Draft. He's currently holding out from the Chargers — who have Super Bowl aspirations — out of fear that he'll be franchise tagged for two years after his rookie deal expires at the end of this year.

The next high-profile running back that could be faced with this dilemma is New York Giants superstar Saquon Barkley. Barkley, the No. 2 overall pick in the 2018 NFL Draft, ran for 1,307 yards in his rookie season, while also catching 91 passes. Hall of Fame running back LaDanian Tomlinson offered insight on advice that he gave to Barkley that suggests he's very supportive of Elliott's decision to stand his ground.

“[I told Saquon Barkley to] Think like a basketball player,” Tomlinson said to ﻿Yahoo Sports. “Which means: Don't be caught up in staying with just one team or saying, ‘Oh, I want to be with this team so bad that I'm willing to take less.’ It’s a business at the end of the day."

The NFL's current CBA expires at the conclusion of the 2020 season. Fifth-year options and the franchise tag figure to be a point of contention in CBA negotiations. For players that entered the NFL under this CBA — running backs specifically — holding out late in a rookie deal may be their best route.