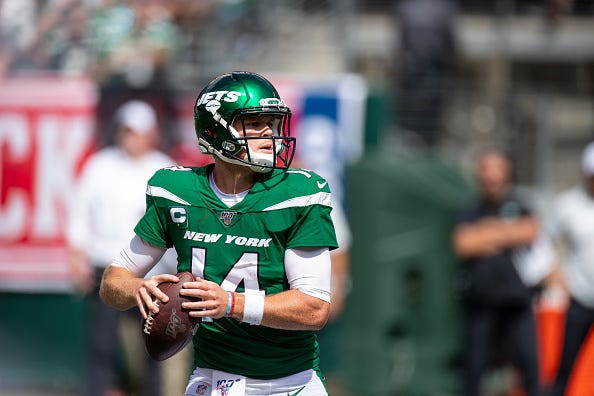 Sam Darnold has gotten clearance to resume non-contact drills with the Jets, but concern remains — specifically about his spleen.

The quarterback and Jets head coach Adam Gase offered a hopeful update on Darnold’s condition Monday, saying that he’s been cleared to throw a football.

But whether he throws it in an NFL game is another question, as his status for Sunday’s game against the Philadelphia Eagles is in doubt.

Darnold hasn't played since Week 1 after contracting mononucleosis, a complication of which is an enlarged spleen.

"For me, it's just about doing what the doctors say," Darnold told reporters Monday. "Like I said, it's out of my control. My spleen at this point is going to do what it's going to do, and right now I'm just focused on — if they say I can get some cardio in, getting in as much cardio as I can.”

"Right now what they're telling us is he can't have any contact," Gase added. "So if we were playing the game tomorrow or Wednesday, like, he wouldn't be able to play 'cause he hasn't been cleared for contact."

If Darnold isn’t available in Week 5, the Jets will turn to Luke Falk in what would be his second career start.

"It's kind of one of those things where the sooner, the better that I have an answer," Gase said. "Right now it is what it is. So, I mean, I just have to keep kind of preparing with the possibility of Sam going and then possibility that Luke might have to go."