Shortly before 9:30 p.m. ET Saturday — often the safest time to check out of the sports world for a few hours — ESPN's Adam Schefter delivered one of the most shocking reports in recent memory: Andrew Luck was going to retire.

This announcement came just a couple weeks shy of the Indianapolis Colts' Week 1 matchup with the Los Angeles Chargers. The report surfaced 19 days before Luck's 30th birthday. And perhaps most shockingly, news of Luck's retirement broke in the midst of the Colts' Week 3 preseason tilt against the Chicago Bears, as the reigning NFL Comeback Player of the Year stood on the sideline with his now-former teammates.

There may end up being a library full of books written and documentaries produced about Luck's career. Heck, you could make a hell of a short film about the events that transpired Saturday evening alone. For now, here's a few thoughts on one of the most surprising decisions in NFL history.

1. Constant Injuries Can Destroy You Mentally 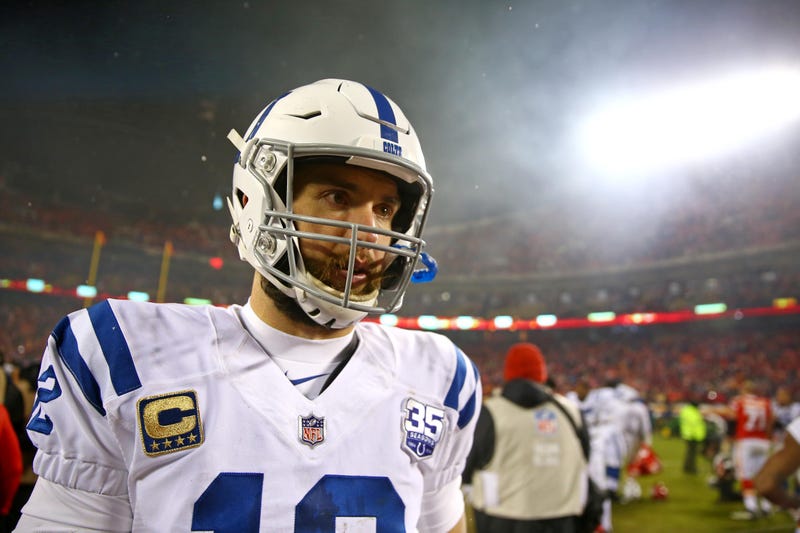 "I'm in pain," Luck said at his impromptu retirement press conference. "I'm still in pain. I'm in this cycle — it's been four years of this injury pain-rehab cycle. And for me to move forward in my life the way that I want to, it doesn't involve football."

Had Luck retired after the 2017 NFL season — in which a shoulder injury cost him the whole season and cast doubt on his ability to play quarterback moving forward — this type of shock factor wouldn't have been there. But Luck made it back from a year that he said turned him into a "sad, miserable human" and tossed 39 touchdowns and threw for over 4,500 yards in 2018 while leading the Colts to the playoffs. He had seemingly turned the corner.

Luck was dealing with a calf strain and myriad of other issues in the lower part of his left leg that likely would have sidelined him for the start of the regular season. In his seven-year NFL career, Luck tore cartilage in both ribs, suffered a lacerated kidney, tore his labrum, tore his abdomen and had a concussion, which despite being a traumatic brain injury, is somehow an afterthought.

As someone that had a largely insignificant Division II hurdling career ended by a trio of far less serious injuries, allow me to say this: going through a few years of constantly rehabbing injuries only to sustain another one shortly after and have to start the process over again is exhausting. It's the loneliest feeling in the world, and there's not a single person other than you that can really relate to the constant discomfort and self doubt that comes with it.

To a degree, this retirement shines a light on mental health, but not in the way you might think. The biggest takeaway from a mental health perspective in this case is Luck likely got tired of asking himself "Is this going to be how the rest of my life goes?"

In thanking Colts head coach Frank Reich, Luck talked about how he couldn't believe how much joy the game of football brought him for stretches of the 2018 season. Luck's story isn't about someone with a world of talent that just wasn't as invested as he ought to have been. His decision instead highlights someone that made the decision to attempt to minimize the pain he's in for the rest of his life, both mentally and physically.

2. It Sure Doesn't Seem Like Luck Is Going To Change His Mind 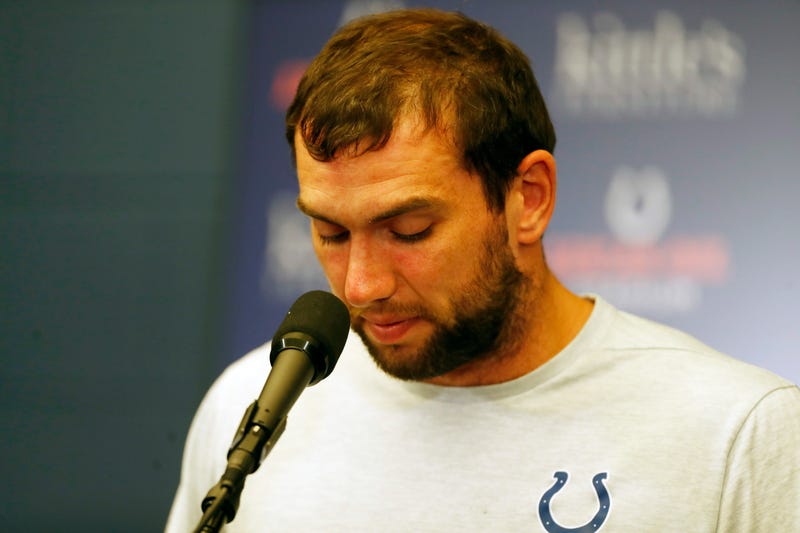 Luck is only 29, so theoretically he could sit out a season or two, start to feel better physically and get the itch to return to football. Stranger things have happened. But nothing he said Saturday evening makes you think there's even a slight chance of that actually happening.

"I can't see the future," Luck said in response to a question about whether he'll change his mind down the road. "But I very clearly in my mind see that I won't [change my mind]."

Five-time All-Pro Patrick Willis retired from the NFL after the 2014 season at the age of 30. He's never for a second seemed to second-guess his decision. Three-time All-Pro wide receiver Calvin Johnson walked away from the NFL a year later, despite catching 88 passes for 1,214 yards in his final season. He's still only 33, but there's never been an indication that he's seriously weighed returning to the sport either. Both, like Luck, dealt with a laundry list of injuries in their respective careers that will likely affect them the rest of their lives. So they got out while they could minimize the damage.

Could Luck decide after this season to return? Sure, and the Colts almost certainly would welcome him back with open arms. But if he's walking away from the sport because of the physical and mental toll that injuries have taken on him, it wouldn't seem logical to jump right back into the sport if he starts to have improved health. 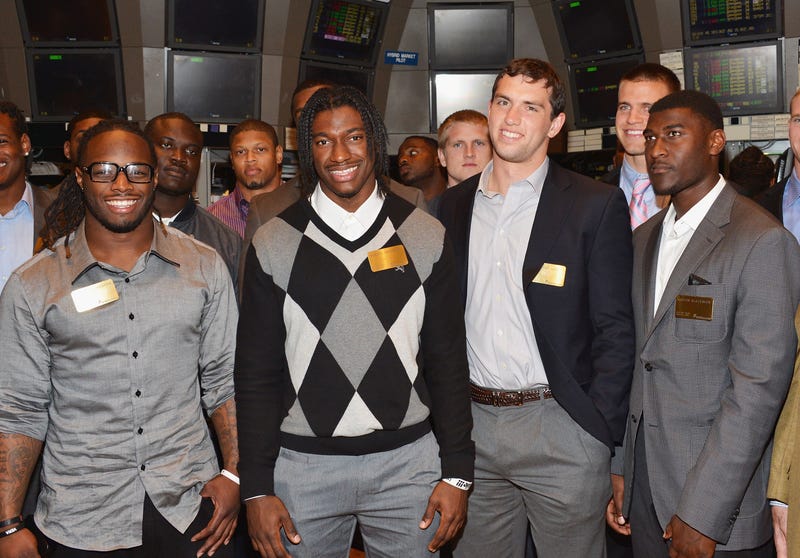 Andrew Luck (third from the left) was part of what was supposed to be a dominant draft class. Photo credit (Slaven Vlasic/Getty Images)

The 2012 NFL Draft Class was billed as one of the best in NFL history. Luck's sudden retirement may make it ripe for an ESPN "30 for 30" about just what went wrong that didn't allow it to become that.

Let's start with this: Luck was an exceptional football player when he was on the field. In Peyton Manning's absence in 2011, the Colts went 2-14. A year later, Luck threw for over 4,300 yards and led the Colts to a playoff berth. In four of his six seasons as a starter, Luck took the Colts to the postseason. He'll finish his career 20 games over .500 as a starting quarterback.

Luck's retirement means that Robert Griffin III, the No. 2 overall pick in that draft, will outlast Luck in the NFL. Two years ago, even with Luck's NFL future in doubt, that had seemed unfathomable. Griffin was without a job in 2017 after injuries had limited him to just five games with the Cleveland Browns in 2016. His career appeared to be over, but he's resurfaced as a backup for the Baltimore Ravens.

However, it seems unlikely Griffin will get another chance to start in the NFL again. He has never been able to recover from an ACL injury that he sustained in the Wild Card round game of his rookie season; when he threw 20 touchdowns to five interceptions, rushed for 815 yards and led the Redskins to the NFC East title.

In addition to injuries, he never appeared to be in favor with Mike and Kyle Shanahan and probably wasn't as mature as he should have been, either. A combination of the dysfunction of the Redskins and an inability to stay healthy swallowed up Griffin's career.

Other notables from the 2012 draft class include Trent Richardson, who averaged just 3.3 yards-per-carry in his career after being selected with the No. 3 overall pick by the Cleveland Browns. He was out of the league by his 25th birthday.

Wide receiver Justin Blackmon had can't-miss talent when he was drafted by the Jacksonville Jaguars with the No. 5 overall pick, but substance abuse issues derailed his career and he has not played in the NFL since 2013.

On the other hand, linebacker Luke Kuechly and defensive tackle Fletcher Cox may have been the best first-round prospects from that draft class. And for as great as Luck was when he played, the future Hall of Fame quarterback in the 2012 draft class will be Russell Wilson, whom the Seattle Seahawks selected 74 picks after Luck was taken.