Five matchups will kick off Week 2 of the NFL preseason Thursday evening. Fittingly then, here's five players to keep an eye on in the second week of the preseason.

This is the first summer in at least five years that Rodgers has been passed up as being seen by the public and those around the sport as the best quarterback in football. A 6-9-1 season - along with the emergence of a potential all-time great in Patrick Mahomes - tends to have that effect.

Out of what became a toxic relationship with former head coach Mike McCarthy, Thursday's game against the Ravens will offer the first glimpse of what a Rodgers-Matt LaFleur offensive marriage could look like.

Now 35, Rodgers and the Packers first-team offense will play "a quarter or so," per LaFleur. His new head coach is just four years older than him, and they've seemed to disagree this summer on the both the value of joint practices and how much freedom Rodgers will have at the line of scrimmage.

Though the Packers are unlikely to show a ton in the preseason, Rodgers will probably be less inclined to audible based on what defensive looks he's given. So Thursday could be a good look at how locked in Rodgers and LaFleur are with a few weeks until their first season together kicks off.

John Mara, one of the Giants owners and the team president, said this week that he hopes Jones doesn't play in the regular season in 2019. However, after his first preseason appearance, Giants fans likely won't be keen on waiting until the 2020 season to see the No. 6 overall pick in the NFL Draft play for the first time in a regular season game.

As far as preseason games go, Jones' debut last week couldn't have gone much better. After the Giants went three-and-out on their first drive, the former Duke quarterback came in and completed all five of his pass attempts for 67 yards and an eventual 12-yard touchdown pass.

Friday evening, Jones and the Giants will host the Chicago Bears. It's a chance to for Jones to get more comfortable with the speed of the game at the NFL level, and potentially create a media-driven quarterback controversy.

Of course, the concept of a redshirt year for Jones cab only become a reality if 38-year-old Eli Manning is able to have a bounce-back season and keep the Giants in the postseason hunt in a division that also includes the Philadelphia Eagles and Dallas Cowboys. As unlikely as that seems, Manning only got to throw one pass in last week's preseason victory over the New York Jets. If Jones is a must-watch, then so is Manning, and not simply because Manning has to be removed from the game before Jones can come in. 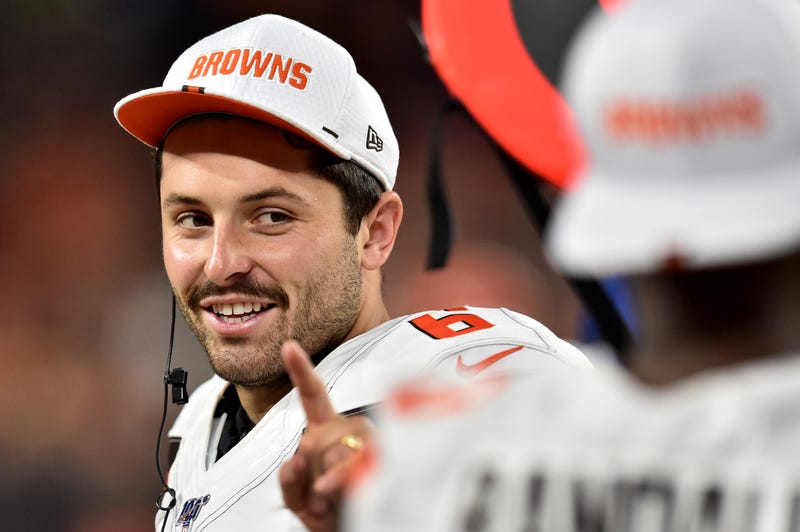 Baker Mayfield has made quite a few headlines this summer. Photo credit (Ken Blaze/USA Today Images)

Rather than remaining quiet during a summer that's featured the most anticipation for a Browns season since they re-entered the league in 1999, Baker Mayfield has leaned into it.

The former No. 1 overall pick says that you shouldn't expect him to change, either. And if Mayfield performs anything like he did in the Browns preseason opener, the hype around the team - which he says is real - will only gain traction.

After a few joint practice sessions with the Indianapolis Colts, the two teams will square off Saturday evening at Lucas Oil Stadium. Odell Beckham Jr.'s minor hip injury likely will keep him from playing Saturday, and it's unclear if Jarvis Landry will make his preseason debut this weekend either. But without either of the star receivers active in Week 1 of the preseason, Mayfield went 5/6 for 77 yards and a touchdown.

It's getting late early for Josh Rosen.

RADIO.COM Sports NFL Insider Armando Salguero predicted this week that neither of the two quarterbacks competing for the Miami Dolphins starting quarterback job will ultimately be the long-term answer at the position for first-year head coach Brian Flores.

With all due respect to Ryan Fitzpatrick, he's a 36-year-old journeyman backup. No one ever expected him to develop into the Dolphins franchise quarterback. The fact that he appears to be leading the quarterback battle between amounts to an indictment on Rosen, who Flores wants improved body language from.

After being selected with the No. 10 overall pick in the NFL Draft by the Arizona Cardinals last year, Rosen went just 3-10 in 13 starts, while throwing three more interceptions than touchdowns. Still, it was relatively easy to write off the Cardinals - David Johnson had a down year, Larry Fitzgerald is in the twilight of his career and head coach Steve Wilks was fired after just one season.

The Cardinals were a mess, which earned them the No. 1 pick, and a new coaching staff decided they were better moving forward with Kyler Murray than Rosen. If the Dolphins coaching staff decides they are better entering the 2019 season with Fitzpatrick at quarterback - after using a second and fifth-round pick to acquire Rosen - it may just be a Rosen problem.

Ravens head coach John Harbaugh said to "take the over" when asked if his second year quarterback will top the 139 rushing attempts made by Cam Newton in 2017. Color quite a few people in NFL circles skeptical of whether that's a sustainable way for your franchise quarterback to play.

In the preseason, of course, the Ravens aren't going to expose the former Heisman Trophy winner to any of those hits. So the preseason offers an opportunity to see how the 22-year-old has grown as a passer.

In Week 1 of the preseason, Jackson's performance was a mixed bag. Jackson did go 4/6 for 59 yards and a touchdown, though it's hard to get this pass out of your head: