It's still not quite real football, but Week 3 of the NFL preseason normally offers the closest product to the real thing until, well, the real thing.

Here are five players to watch in Week 3 of the NFL preseason.

In this week's RADIO.COM Sports NFL Power Rankings, the Jaguars checked in at No. 21 and were billed as "the hardest team to evaluate in the NFL." A major part of that is uncertainty about what Nick Foles - whom the team inked to a four-year, $88 million deal this past offseason - will be as a full-time starting quarterback.

We know that Foles, 30, thrived in the role as Carson Wentz's super-sub in Philadelphia. But the last time he entered an NFL season as a starting quarterback - excluding last year, when Wentz was still recovering from his torn ACL - was in 2015 for the Rams. The *St. Louis* Rams.

Foles' last two attempts at starting didn't go especially well. While the Eagles started out 6-2 under him in 2014 before he tore his collarbone, he had 14 turnovers in that span. He went just 4-7 as the Rams starter in 2015, with 10 interceptions, three more than the amount of touchdowns he had thrown.

Over the past two seasons, Foles has cemented his legacy as the greatest backup quarterback in NFL history. 2019, however, offers him a chance to make his legacy much more than that. Thursday's game in Miami will be the first look at what Foles brings to the table in his second stint away from Philadelphia.

If New York Giants co-owner and president John Mara has his way, Thursday evening in Cincinnati may be the last time Jones plays until the 2020 preseason. After all, Mara suggested earlier this preseason that he hopes that the Giants have so much success with Eli Manning under center in 2019, that the season turns into a redshirt season for the No. 6 overall pick.

It's unclear if Giants head coach Pat Shurmur plans to play Jones in the final week of the preseason behind what will likely be an offensive line full of backups. So if this is it for Jones for a while, he has a chance to build on what's been a strong preseason.

In the Giants' first two preseason games, Jones is 16-of-19 for 228 yards and two touchdowns. Given how the rest of the league viewed Jones as a prospect - and that they also owned the 17th pick in the first round - the Giants, as Baker Mayfield said, almost certainly overdrafted Jones. But if Thursday is the final time Jones plays this preseason, the Duke product has a chance to wrap up what's been a pretty impressive summer. 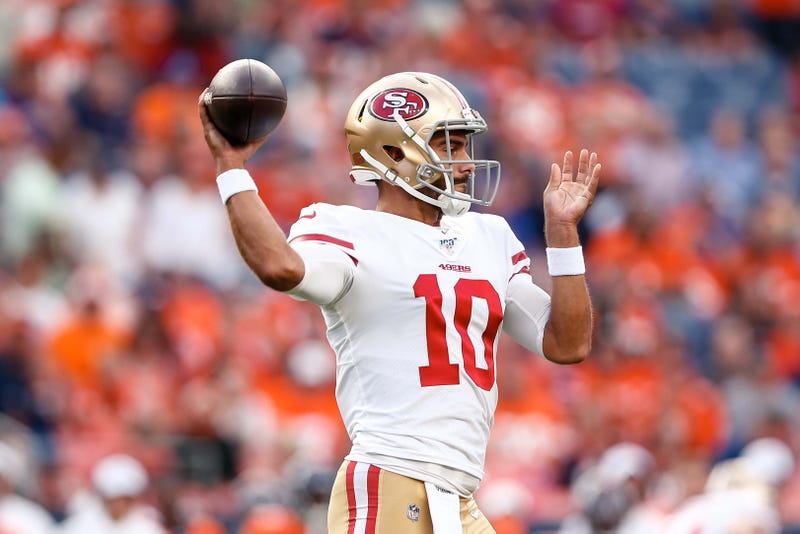 Jimmy Garoppolo had a poor showing in his return from an ACL injury. Photo credit (Isaiah J. Downing/USA Today Images)

Garoppolo's less-than-stellar return from an ACL tear in Week 2 of the preseason isn't a reason to panic. But going 1-of-6 with an interception and 0.0 quarterback rating does tend to leave a bad taste in your mouth.

The 27-year-old has an 8-2 record as a starter in the NFL, and has thrown 17 touchdowns to just eight interceptions in his career. And, of course, proximity to Tom Brady and Bill Belichick always intrigues people. There's a lot to like about Garoppolo.

At the same time, this is Garoppolo's sixth NFL season. The 49ers, if they were so inclined, could get out of his contract at the conclusion of the 2019 season and only take on $4.2 million in dead cap money. This has to be a year where Garoppolo - and Kyle Shanahan's 49ers - take a major step forward.

There's, of course, only so much one can accomplish during a preseason game. But given that it's Week 3, Garoppolo figures to see at least a few series against the Kansas City Chiefs Saturday evening. It would help to ease the nerves of a lot of concerned observers if he has a strong performance.

In the Arizona Cardinals preseason opener, Kyler Murray wasn't overwhelming, but the 2019 No. 1 overall pick did complete six of seven passes for 44 yards and flashed the ability to maneuver in and around the pocket that many think will help him to overcome being 5'10 (at best).

As Tuesday's episode of Hard Knocks reminded us, the second week of the NFL preseason didn't go as swimmingly for Murray and the Cardinals.

In the Cardinals Week 2 preseason matchup - which came against Jon Gruden's Oakland Raiders - Murray went 3-8 for just 12 yards and was sacked in the endzone for a safety. Even with a new head coach in Kliff Kingsbury and Murray under center, the Cardinals looked very much like the 2018 installment of the team, which went 3-13.

The Cardinals' matchup Saturday in Minnesota against the Vikings will likely provide the most extended look yet at Murray in a very vanilla version of the Air Raid offense.

When Hall of Fame quarterback Steve Young has to respond to comparisons to himself after a preseason game, you're doing something right.

A third-year pro out of BYU, Hill emerged in 2018 as a weapon that could provide a change of pace from Drew Brees (or even Alvin Kamara). But some around the sport are beginning to wonder if the 28-year-old won't eventually be more than just a gadget piece in Sean Payton's offense.

Hill was one of the stars of the second week of the preseason, going 11-of-15 for 136 yards and two touchdowns through the air. In a 19-7 win over the Los Angeles Chargers, Hill also ran for 53 yards on five carries.

Hill remains third on the quarterback depth chart behind Brees and Teddy Bridgewater. But even if you think him eventually succeeding Brees is far-fetched, Hill is going to have a role in the Saints offense in 2019. Saturday night's matchup with the New York Jets will offer another glimpse at how Hill has grown since the 2018 season concluded.

news
Did explosions on the sun’s surface sink the Titanic?
news
Did you get an alert for 4.5 magnitude earthquake in LA? Did you get no alert? Here's why
news
Dad creates candy chute to prepare for a socially distanced Halloween
i'm listening
I’m Listening: Lily Cornell Silver Knows the Importance of Checking In on Yourself
news
You can now visit the Eisenhower Memorial
music
TikTok Gets Countrified with New Nashville Channel 'The 615 House'