The Los Angeles Rams (7-3) are coming off an impressive win over the Tampa Bay Buccaneers on Monday night. The Rams will look to get one step closer to securing a playoff spot when they host the reeling San Francisco 49ers (4-6). The 49ers are off their bye riding a three-game losing streak, but the BetQL model sees value in San Francisco as a 6.5-point underdog.

The 49ers are a disappointing 4-6 but sit just two games out of a wild card spot, so San Francisco is still very much alive for a playoff berth. In order for that to happen though, the team will need to spring a road upset over the Rams. The BetQL model has Los Angeles as a 5-point favorite. The 1.-5-point difference makes the 49ers a top play. 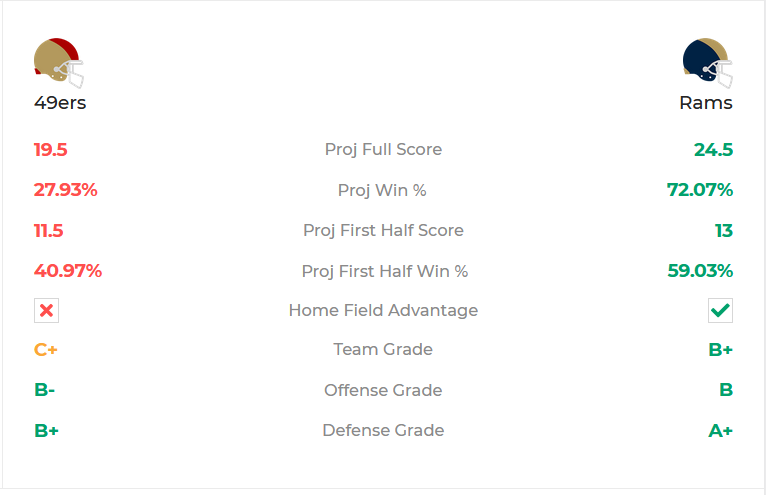 The Rams opened as a 7-point favorite and the number jumped to 7.5 early in the week, before moving to the current line of 6.5. Since the BetQL model has the 49ers at +5, San Francisco remains a top play at a line of +6.5 or higher. Check out BetQL to follow all the latest line movements for every NFL game.

The 49ers defeated the Rams 24-16 in Week 6 thanks to 268 yards and three touchdowns from starting quarterback Jimmy Garoppolo. Backup quarterback Nick Mullens will get the start on Sunday with Garoppolo still recovering from an ankle injury. Mullens will need to cut down on mistakes after throwing four interceptions in losses to the Green Bay Packers and New Orleans Saints. Reinforcements are on the way for San Francisco though with the return of receiver Deebo Samuel and running back Raheem Mostert.

The 49ers will need to get the running game going to pull the upset. In the first meeting, the Rams’ defense held San Francisco’s vaunted rushing attack to just 3.3 yards per carry.

The Rams come in winning three of their last four games after the Week 6 loss to San Francisco. In the first meeting, quarterback Jared Goff struggled, completing just 19 of 38 passes. Goff needs to play better this time out, but the key to the game could come down to Mullens versus a Rams defense allowing the second-fewest points in the NFL and averaging over three sacks a game.

Los Angeles has fared well versus the NFC the last two years, going a stellar 15-5 against conference opponents during that span.

While the BetQL model takes all the bias out of predicting games and focuses strictly on line value, this is also a good situational spot to take the points with San Francisco. The 49ers had a week off and with Mostert and Samuel back, the team is the healthiest it's been in over a month. Meanwhile, the Rams are off back-to-back emotional games against the Buccaneers and Seattle Seahawks. Try to get +7 if possible, but BetQL feels +6.5 still makes the 49ers a top play.