The Kansas City Chiefs snapped a two-game losing streak on Thursday Night Football, but it came at a price. Quarterback Patrick Mahomes, the reigning NFL MVP, left with a knee injury that's expected to cost him at least a few weeks.

Mahomes has thrown for a league-leading 15 touchdowns and 2,180 yards through six-and-a-half games, which certainly meant that prior to this injury he was in the NFL MVP discussion, if not at the top of the list of potential candidates. With the expectation that he will miss at least a few weeks, the NFL MVP race appears to be wide open.

Here's a look at five other players to watch the rest of Week 7, including a pair of potential NFL MVP candidates: 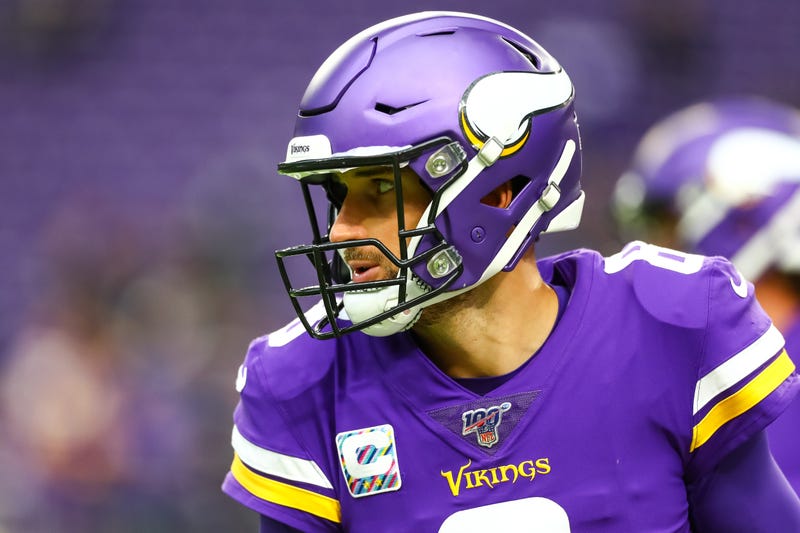 Ahead of last week's Minnesota Vikings-Philadelphia Eagles tilt, Eagles linebacker Zach Brown called out his former Washington Redskins teammate Kirk Cousins, saying he was the "weakest link" on the team's offense. Cousins, who says he never heard Brown's comments, responded by throwing for 333 yards and four touchdowns in a 38-20 win. Brown was released by the Eagles days later.

Over the past two weeks, Cousins has thrown for 639 yards and two touchdowns, to help lead the Vikings on their first winning streak of the 2019 season. Just prior to that, it appeared like there was developing turmoil on the Vikings, led by wide receivers Stefon Diggs and Adam Thielen. But winning cures all ills.

All that said, the Vikings face the division-rival Detroit Lions this week. While the Lions are on a two-game losing streak, they've lost to the Kansas City Chiefs and Green Bay Packers in their last two games by five combined points. The 2-2-1 Lions have been one of the most pleasant surprises of the first-half of the 2019 season.

And while the Vikings are 4-2, they find themselves a game back of the Packers in an NFC North where no team has a losing record. The Vikings are 0-2 in their first two games in the NFC North. This isn't a must-win game, but it's hard to remember too many recent examples of teams that lost their first three divisional games in the best division in football and went on to win it. 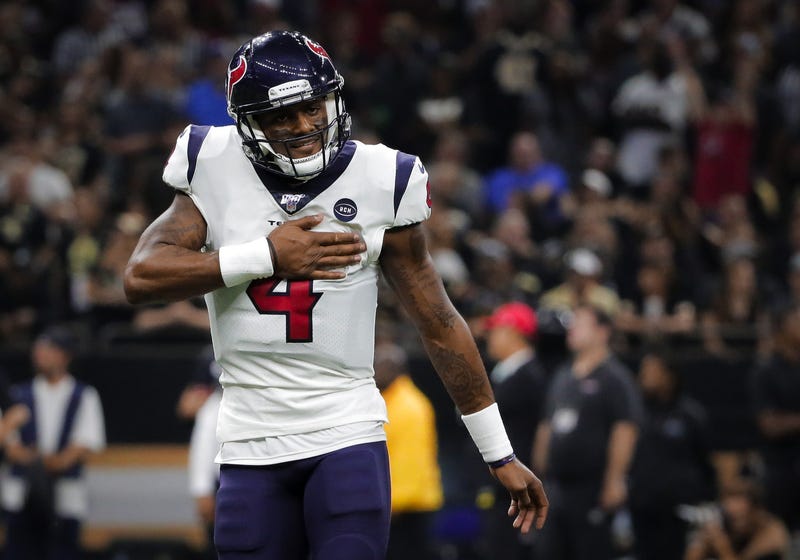 Through the first six weeks of the 2019 NFL season, Houston Texans quarterback Deshaun Watson, in his third NFL season, has emerged as one of the game's elite quarterbacks.

A year ago, Watson was sacked a league-high 62 times. Despite making a major trade for Laremy Tunsil just prior to the season, Watson was sacked 18 times in the Texans first four games of 2019. Over the last two weeks, though, he hasn't been sacked a single time. Over that same span of time, he's thrown for 706 yards, has six passing touchdowns and has rushed for two more scores. The Texans have scored 84 points in the last two weeks, blowing out the Atlanta Falcons in Week 5 and upsetting the Kansas City Chiefs in Week 6.

Watson and the Texans have a tough challenge in Week 7, as they'll host the 3-2 Indianapolis Colts. The Colts are coming off of their bye week, with a Sunday Night Football win in Kansas City their last game played. A win by the Texans this week would put them firmly in the driver's seat in the AFC South, while positioning Watson as a potential NFL MVP candidate. 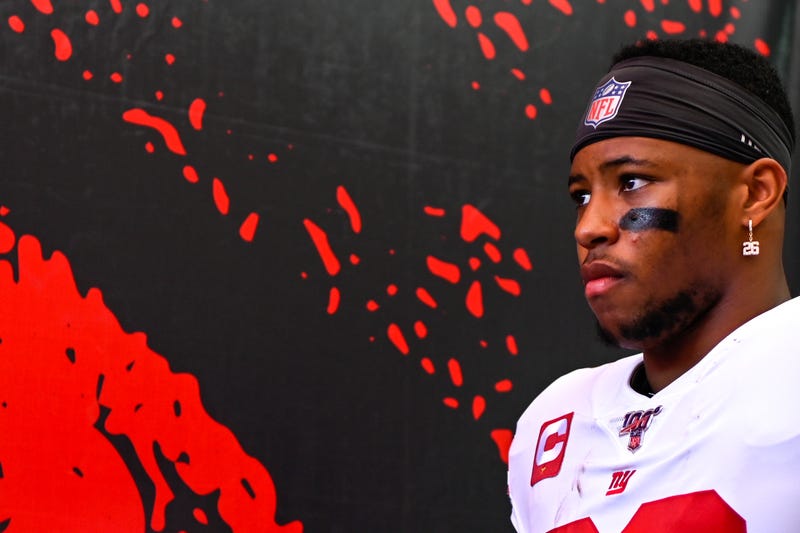 Less than a month after suffering a high ankle sprain in a win over the Tampa Bay Buccaneers, the New York Giants 22-year-old superstar running back will return Sunday when the team hosts the Arizona Cardinals.

After the Giants selected him with the No. 2 overall pick in the 2018 NFL Draft, Barkley turned in one of the greatest rookie seasons in NFL history en route to winning the Offensive Rookie of the Year. On the ground, Barkley averaged five yards per carry in his rookie season, finishing the year with 1,307 yards and 11 rushing touchdowns. Perhaps even more impressive is how much of a weapon Barkley proved to be in the passing game - he caught 91 passes for 721 yards and four touchdowns in his rookie campaign. 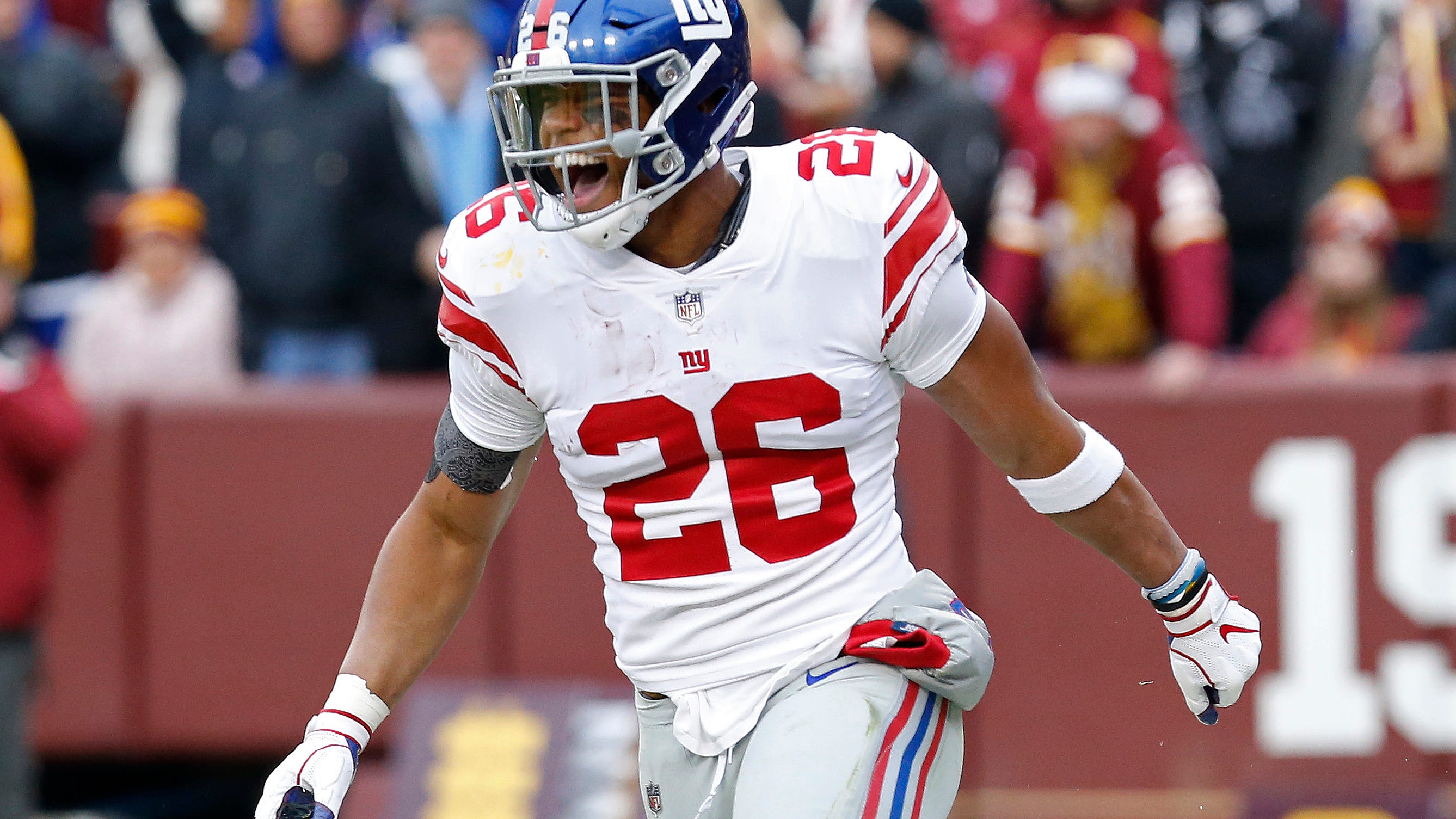 Prior to suffering a high ankle sprain in Week 3, Barkley was off to a rather remarkable start to his second NFL season. In two-and-a-half games in 2019, Barkley has averaged a staggering 6.4 yards-per-carry on the ground. Though Patrick Mahomes and Aaron Donald would likely have something to say about it, there's a legitimate case to be made that when healthy, Barkley is the best overall player in the NFL.

And while the case for the Giants as a playoff contender is much more difficult to make, both the Philadelphia Eagles and Dallas Cowboys have underwhelmed through the first six weeks of the season and are tied at the top of the NFC East at 3-3. Considering those two teams play each other this week, one of them is going to lose, barring a tie. The 2-4 Giants have a winnable game at home, and in addition to Barkley, it appears tight end Evan Engram will return from a knee injury. 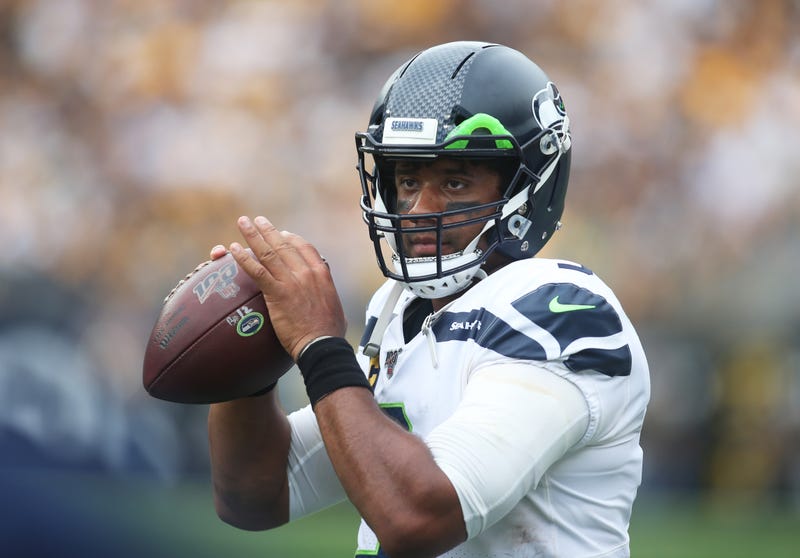 Russell Wilson is in the midst of the best season of his career. Photo credit (Charles LeClaire/USA Today)

Even prior to Kansas City Chiefs quarterback Patrick Mahomes' knee injury Thursday night, Seattle Seahawks quarterback Russell Wilson had surpassed him as the betting favorite to win the NFL MVP. At 30, Wilson is playing as well as he ever has.

Through the first six weeks of the 2019 season, Wilson has tossed 14 touchdowns and thrown for 1,704 yards. He's yet to turn the ball over, and the Seahawks are off to a 5-1 start. Wilson's career was already on a Hall of Fame track prior to 2019, but he's never won a league MVP or been an All-Pro. He has a chance to do that this season.

Even with a 5-1 record, the Seahawks actually don't lead a crowded NFC West. The San Francisco 49ers, who have already had their bye week, are 5-0. And though the Los Angeles Rams are 3-3, they are the defending NFC Champions and added All-Pro cornerback Jalen Ramsey in a trade this week, so they probably have a run in them. For as much as his play against the Baltimore Ravens Sunday will determine his standing in the NFL MVP race, it will determine his team's chances of winning a competitive division and potentially securing a first round bye in the NFC playoffs. 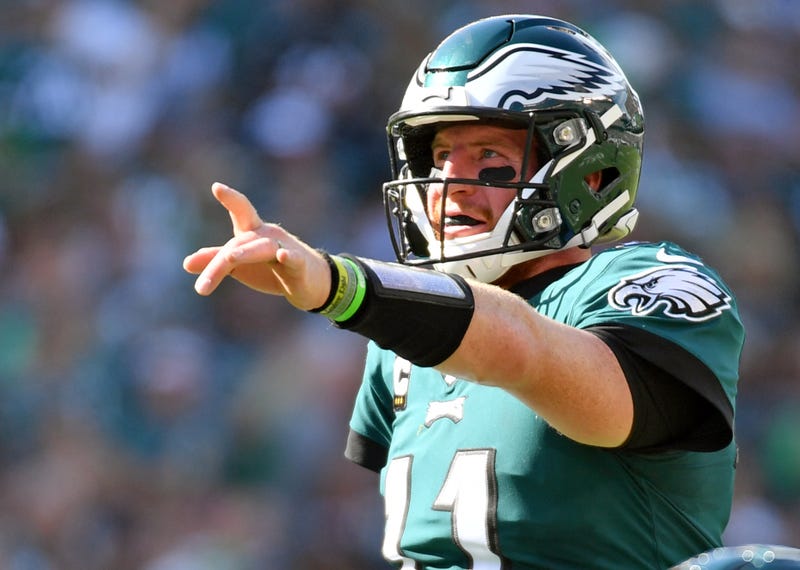 Carson Wentz and the Eagles have a key matchup in Week 7. Photo credit (Eric Hartline/USA Today)

SportsRadio 94 WIP's Eliot Shorr-Parks has called Sunday the biggest game of Carson Wentz's career, and it's hard to argue with that.

The Philadelphia Eagles will enter their Sunday Night Football matchup with the Dallas Cowboys tied for the top spot in the NFC East, but far from looking like the Super Bowl contender many thought they could be at the outset of the season.

After what turned out to be a blowout loss in Minnesota last Sunday, the Eagles will catch a Cowboys team that has lost three consecutive games, including one to the previously winless New York Jets in Week 6. Sunday could prove to be a springboard for whichever team wins. 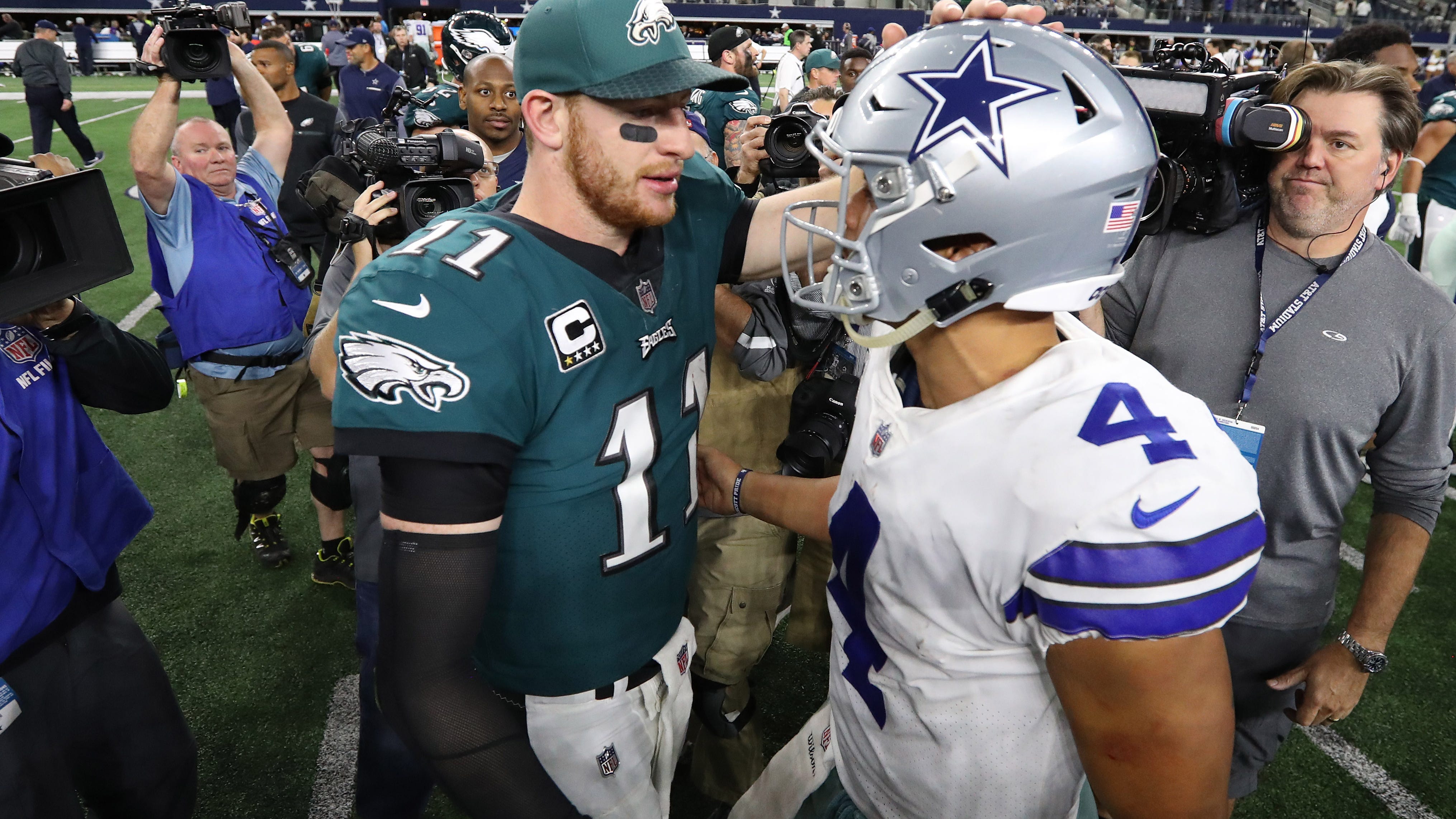 The 3 Most Intriguing Matchups of NFL Week 7

So, yeah, to say this is the biggest game of Wentz's career isn't hyperbole. Suggesting otherwise may actually be.