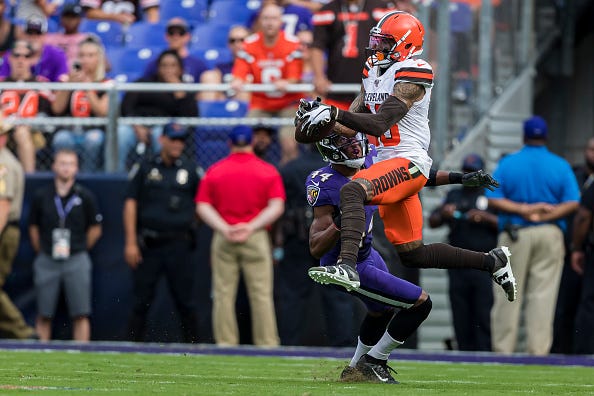 It was a gutter war in Baltimore as Browns wideout Odell Beckham Jr. and Ravens cornerback Marlon Humphrey turned the field into the octagon on Sunday.

The two players appeared to butt heads from the get-go, but Beckham took it to a new level when he was seen punching Humphrey.

The showdown came to a head in the third quarter when the two got into a heated scuffle, with Humphrey choking Beckham while Beckham clutched Humphrey’s facemark — all in full view of a ref.

The ruling on the field was offsetting unnecessary roughness penalties, but neither player was penalized further.

Referee Shawn Hochuli explained why the play did not warrant an ejection.

Beckham was held to just 20 yards on two receptions, but the Baker Mayfield-led Browns triumphed over the Ravens 40-25.

“I ran into him after the game and apologized,” Humphrey said. “That’s not really the brand of football I want to represent. [After] the whistle blows, it’s got to be over with.”

Beckham, who was traded to the Browns from the New York Giants in the offseason, was less apologetic.