The NFC South is paving the way for high-tech solutions to the NFL's potential coronavirus problems.

The Atlanta Falcons and Carolina Panthers will introduce innovative, advanced methods with which their stadiums will be cleaned after fans come back to live football action for the first time in 2020. Though their methods are slightly different, the basic gist is the same: use insane, state-of-the-art devices to reduce the risk of coronavirus infection to a minimum.

The Falcons' preferred method? Drones. According to ESPN's Vaughn McClure, the home of the Falcons -- Mercedes-Benz Stadium -- is thought to be the first venue in professional that will use drones. They're officially called D1 disinfecting drones, and they sound crazy complex (via McClure of ESPN):

﻿The drones use electrostatic spraying nozzles for even distribution of medical-grade disinfecting chemicals that include an inhibitor that prevents bacteria and virus from adhering to surfaces without leaving a residue. The nontoxic hypochlorous acid solution is in compliance with Environmental Protection Agency standards, according to the company.

But while they undoubtedly sound extremely complicated, the "D1 disinfecting drone" name isn't as awesome-sounding as what the Panthers are letting loose.

The Xenex LightStrike Germ-Zapping Robot. They're $125,000 apiece and, according to Xenex CEO Morris Miller, they're "the only device(s) that (have) been proven to kill SARS CoV-2, which causes Covid-19, in two minutes." The Panthers have purchased two, meaning that this duo of bad boys is going to destroy coronavirus all throughout the 1.4 million square-foot stadium. 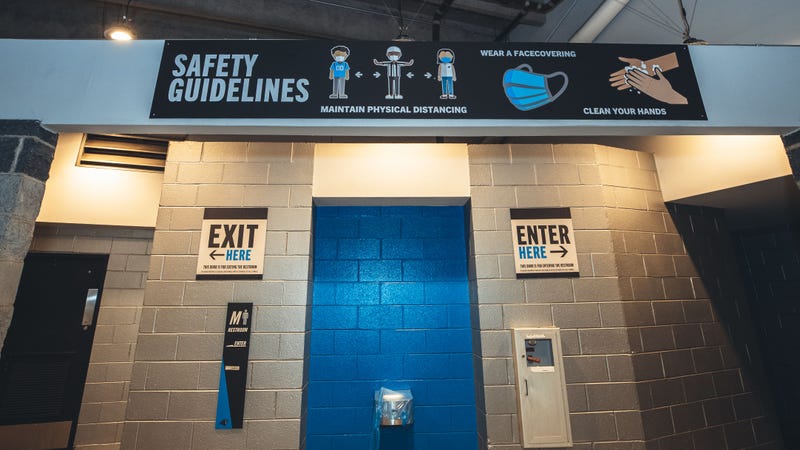 Each individual robot can eradicate the disease with 99.9% effectiveness in 60 hospital rooms per day, according to the company (via McClure of ESPN and Jabari Young of CNBC).

In addition, the Panthers are rolling out two LightStrike Disinfection Pods, which are mobile units that provide the same germ-killing services.

The way in which the robots kill the virus is pretty cool, as well. The LightStrike robots do just as the name suggests: strike light down on surfaces using "bursts of intense, broad spectrum UV light that damages virus DNA in four ways and renders it useless," (via Panthers senior writer Myles Simmons).

"We began using the robots to disinfect the locker rooms, weight room, rehab areas and offices during camp, and we've expanded utilization throughout the building and throughout the stadium," Eddie Levins, the Panthers' director of security and infectious control officer, said. "We can use it in suites, using it in any public space that we need a quick down-and-dirty sanitization. We clean it, and then we disinfect it so it's ready to go, so people can feel safe coming in here again."

If fans want to return to stadiums for a safe experience -- and if NFL teams want to keep their seasons alive and their players safe, especially after an outbreak has put the Titans' season on hold -- this awesome, high-powered technology might be the best way to do it.