Tom Brady and Bill Belichick walked off of Gillette Field Sunday rain soaked after defeating the Cleveland Browns 27-13 in damp conditions. The two are the most successful quarterback-head coach duo in NFL history, having guided the New England Patriots to six Super Bowl titles. While they face an uncertain future together after 2019, this much is certain - they have a chance to make history (and exercise some demons) before this season is out.

With their win over the Browns Sunday, the Patriots have moved to 8-0. For all of the unmatched success that the Patriots have had during the Brady/Belichick era, they've "only" started 8-0 two other times in the 17 previous seasons where Brady has started at least 12 games. One of those two times was in 2007, when the Patriots completed the first 16-0 regular season in NFL history.

The 2007 Patriots, of course, ultimately fell short of completing the second full undefeated season in NFL history, as they were upset by the New York Giants in Super Bowl XLII. Still, there's a rather lengthy list of people that would suggest that was the most dominant team in NFL history. Brady set a new NFL record with 50 passing touchdowns. Randy Moss set a new NFL record with 23 receiving touchdowns. Wes Welker added in 1,175 receiving yards and eight touchdowns. There's never been an offense quite like the 2007 Patriots.

When you consider that Brady was 30 in 2007, it becomes all that much more remarkable that he remains under center for the team in 2019. While, at least to this point, he's not in the NFL MVP discussion, he's tossed 13 touchdowns and is averaging 281.4 yards-per-game through the first eight weeks of the season. 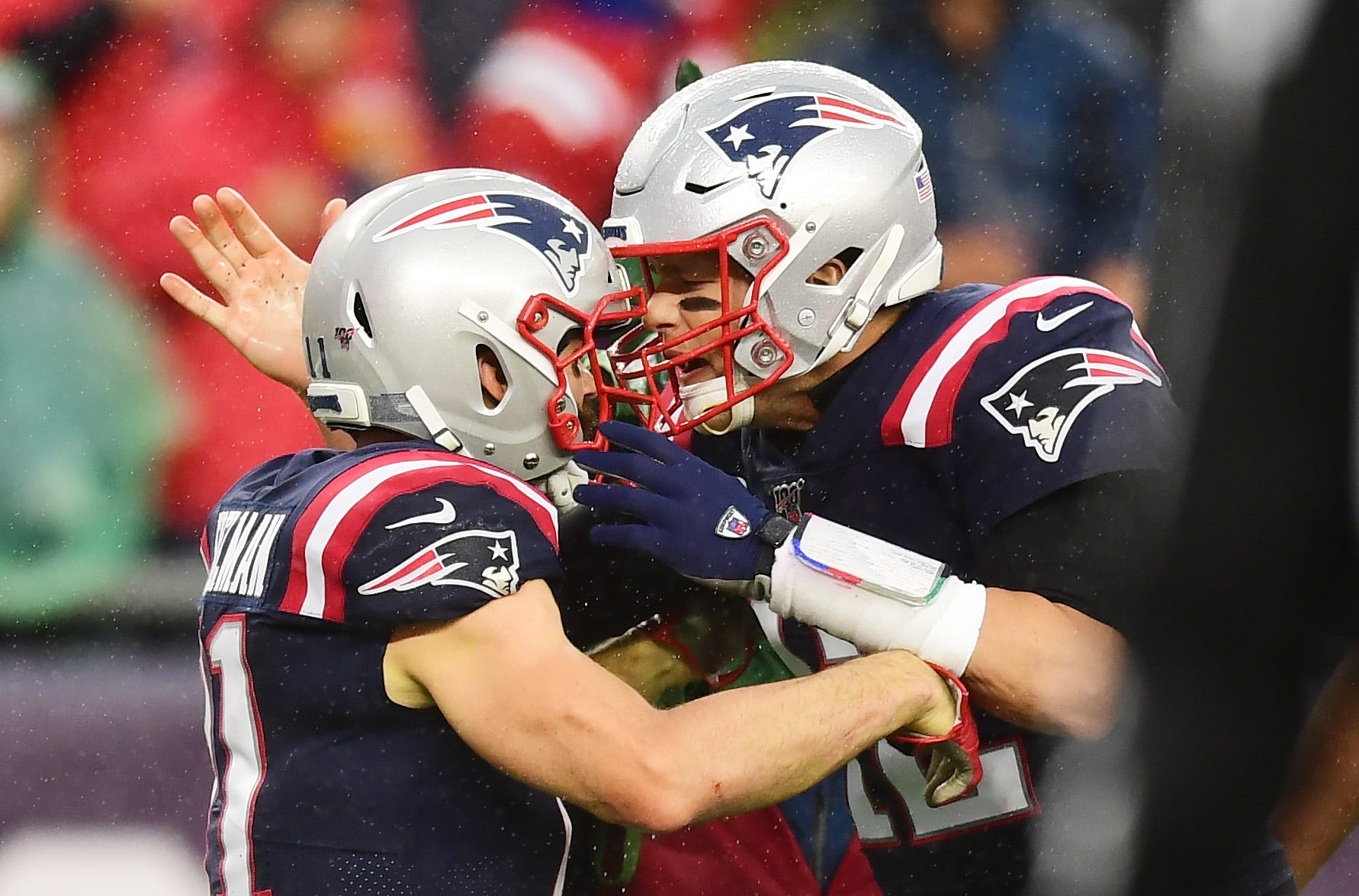 3 NFL Takeaways: The Patriots Are Halfway To A Perfect Season

With all due respect to Brady, it's the defense that's leading this Patriots team on an undefeated quest. In his return to the Patriots, Jamie Collins has paced a defense that is allowing just 7.63 points per game to opponents. They've already shut two teams out, and have a top five passing and rush defense.

Two of the Patriots final three games are against the Cincinnati Bengals and Miami Dolphins, neither of whom has won a game yet this season. If they are able to escape their next five games unscathed, the Patriots have a very real shot at going 16-0.

The Patriots No. 4 ranked rush defense will face their toughest test yet in Week 9, as they'll travel to Baltimore to face the No. 1 ranked rushed offense in the NFL on Sunday Night Football. The Ravens, coming off of their bye week, are averaging 204.1 rushing yards per game, led by quarterback Lamar Jackson and running back Mark Ingram. The Patriots defense has limited opponent's to just 85.2 rushing yards per game, so something has to give.

Following a bye week of their own in Week 10, the Patriots will head to Philadelphia to face a 4-4 Eagles team that's been difficult to figure out. The Eagles entered the season with Super Bowl aspirations, but have been hit hard by the injury bug. After consecutive blowout losses, the Eagles did rebound for a 31-13 win in Buffalo Sunday, but they remain tough to project. If DeSean Jackson and Jason Peters are back for the Week 11 showdown, the Eagles could prove to be one of the tougher tests the Patriots face during the regular season.

The Patriots will return to Foxborough in Week 12, when they'll host the Dallas Cowboys. With a softer schedule, the Cowboys jumped out to a 3-0 start, before losing three consecutive games. That said, before their Week 8 bye, they throttled the Eagles 37-10 on Sunday Night Football.

In Week 13, the Patriots are again slated to play on Sunday Night Football, as they'll face Deshaun Watson and the Texans in Houston. The Texans narrowly escaped with a win over the Oakland Raiders Sunday, and also lost three-time Defensive Player of the Year J.J. Watt for the season with a torn pectoral. Still, while Watson has thrived on the biggest stages dating back to his illustrious college career, the Patriots still feel likely to be road favorites in NRG Stadium.

Week 14 will feature a rematch of last season's AFC Championship, where the Patriots defeated the Chiefs in overtime after winning the coin-flip. But while reigning NFL MVP Patrick Mahomes will almost certainly be back from a dislocated knee cap well before Week 14, he and the Chiefs offense will be left to attempt to figure out a Patriots defense that's stifled every opponent they've faced thus far. If there's anyone capable of that task, it's Mahomes, but the Chiefs have the 24th ranked defense in the NFL, which might set Brady up for his defining performance of the 2019 regular season.

If the Patriots leave Week 14 with a 13-0 record, they'll be in excellent position to complete a perfect regular season. As previously mentioned, they'll play the Bengals in Cincinnati in Week 15, and and host the Dolphins in Week 17. In between those two matchups will be their second tilt against the division-rival Buffalo Bills. While the Bills have the No. 3 ranked defense in the NFL, one of their two losses this season came in Week 4, when the Patriots defeated them 16-10 at Orchard Park.

The feeling here is the Patriots still face an uphill battle to finishing the regular season with a perfect record. By definition, going 16-0 is an uphill battle. Chances are the Patriots will have to settle for going 14-2 or 15-1 and having home-field advantage throughout the postseason as they attempt to win their record-setting seventh Super Bowl title. That would be a hell of a consolation prize.

But, there's an increasingly small list of things that the Patriots haven't accomplished during the Brady/Belichick era. One remaining item on that list is a perfect season. Finishing the regular season undefeated wouldn't guarantee they don't stumble in the postseason, but it would put the Patriots within three wins of a full undefeated season. And wouldn't it be a fitting cherry on top for the Patriots to go 19-0 and win a record-setting seventh Super Bowl in what could prove to be Brady's final season with the team?