Stefon Diggs, the floor is yours:

Top 5 wideouts to ever play the game... GO

Man, why’d you have to go and open that can of worms? We were actually getting work done before Mr. Minneapolis Miracle went and hijacked our whole day. You’ve never seen the sports Slack so lit.

There’s never a right answer to these Mount Rushmore-type questions, but boy are they fun to ponder. We got the Radio.com crew together (not in person, obviously) for an emergency roundtable to address this very pressing matter. You asked for it, Diggs. Here are our top-five receivers of all-time:

It was hard for me to leave out Larry Fitzgerald on this list. Despite ranking second all-time in receptions and receiving yards and sixth in receiving touchdowns, he was not nearly as dominant as Antonio Brown and Calvin Johnson. Brown’s career may have gone off the rails, but I toyed with placing him ahead of Owens for the No. 3 spot on my list. From 2014-17 his numbers are just insane. He had 136 receptions and 1,834 receiving yards in 2015, which is better than any single TO season, however, TO had a much more impressive complete body of work.

I hate to penalize someone like Marvin Harrison for playing with a quarterback like Peyton Manning, but I gave Calvin Johnson the edge because of what he was able to do with so little around him. In 2012, when Megatron led the NFL with 122 catches and 1,964 yards he did it on a Lions team that went 4-12. In his final season before retiring at age 30, Johnson posted 88 catches for 1,214 yards and nine TDs. Had he played a few more years, Johnson would surely be toward the top of the all-time leaderboard in most categories. 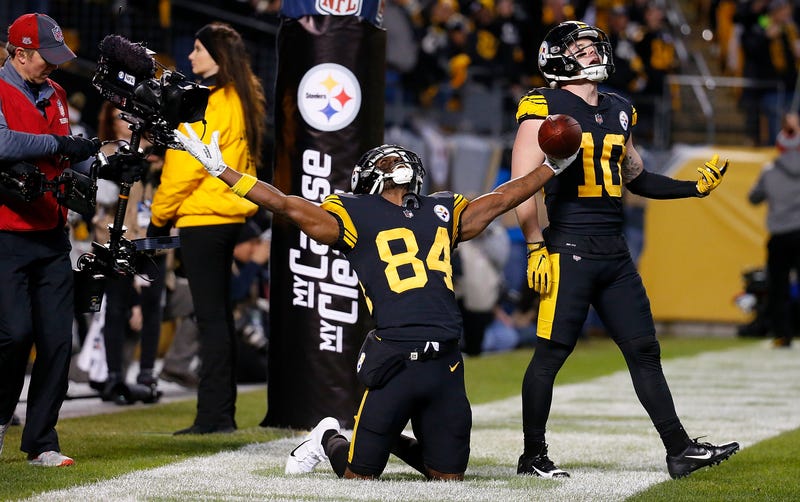 I can really only pick five? Alright, alright. Gun to my head, I’m picking Jerry Rice, Randy Moss, Terrell Owens, Calvin Johnson and Antonio Brown. I was hoping my list wouldn’t be identical to anyone’s, but it looks like John and I are sharing a brain. Great minds, right?

Rice and Moss are givens and I don’t think you can make a top-five receivers list without T.O. on it. I’m still baffled it took him three tries to get into the Hall of Fame. I know Owens burned some bridges along the way, but nine 1,000-yard seasons for three different teams should warrant first-ballot status. Antonio’s recent fall from grace has undoubtedly stained his legacy, but in his heyday, there was no one else like him.

Some will dock points for Johnson only playing nine seasons, but man were those nine years incredible. You could make the case that Johnson’s 2012 was the greatest single-season performance by a receiver in NFL history. The hardest omission for me had to be Marvin Harrison. I can’t believe I did a fellow Syracuse grad like that, but there’s no shame in being the awkward sixth wheel to three current and two future Hall of Famers.

I hate to dismiss Fitzgerald as a compiler, but I don’t think his peak was as great as some of the other names we've mentioned. His longevity is impressive, but he’s only been selected as an All-Pro three times (first team once, second team twice) compared to five All-Pros for AB and four for Megatron, whose career was far shorter than Fitz’s. He’s a lock for Canton, but top-five to ever do it? Not in my book. This list will probably look much different in a few years as Julio Jones, DeAndre Hopkins and Michael Thomas creep closer to all-time status. 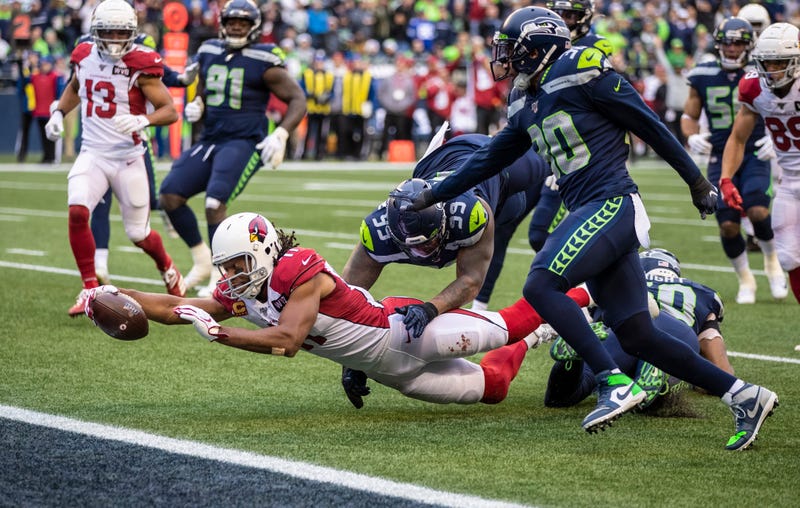 I don’t want this article to sound like a broken record, so I’ll spare you the majority of my explanation for Rice, Moss and T.O. There are four guys in NFL history with at least eight seasons of 1,000 receiving yards and 10 receiving touchdowns, and three of those four are the aforementioned Hall of Famers. In fact, Rice did it nine times.

The fourth guy on that list? Marvin Harrison, who probably won’t be too happy if he reads this article. But it’s hard to deny that he’s been the benefactor of one of the greatest quarterbacks of all time. The same guy that made Julius Thomas a Pro-Bowl tight end two years in a row before he faded into obscurity and was out of the league two years later? The same guy who is in the top three in career passing yards and touchdowns and leads everyone in fourth quarter comebacks? The guy in the Nationwide commercials? You get the picture.

Instead, the bottom of my list is made up of two very different players, one who has been a pillar of stability, reliability, durability and all the other -ability words I can think of. Fitz has made so many big plays in important situations, regardless of who’s under center. He took part in and won the greatest playoff game I’ve ever watched against the Packers, and sure, he had a solid quarterback in Carson Palmer under center. But he’s also had seasons like in 2017, when he caught 109 balls for 1,156 yards with a trio of Palmer, Blaine Gabbert and Drew Stanton each starting at least four games.

Matt Stafford isn’t a bad quarterback by any means, but the Lions have never been a great team and Calvin Johnson has still found a way to post ridiculous numbers. I mean the guy caught 14 balls for 329 yards to single-handedly beat Dallas in 2013. Those are the types of performances that make him a top five all-time WR. 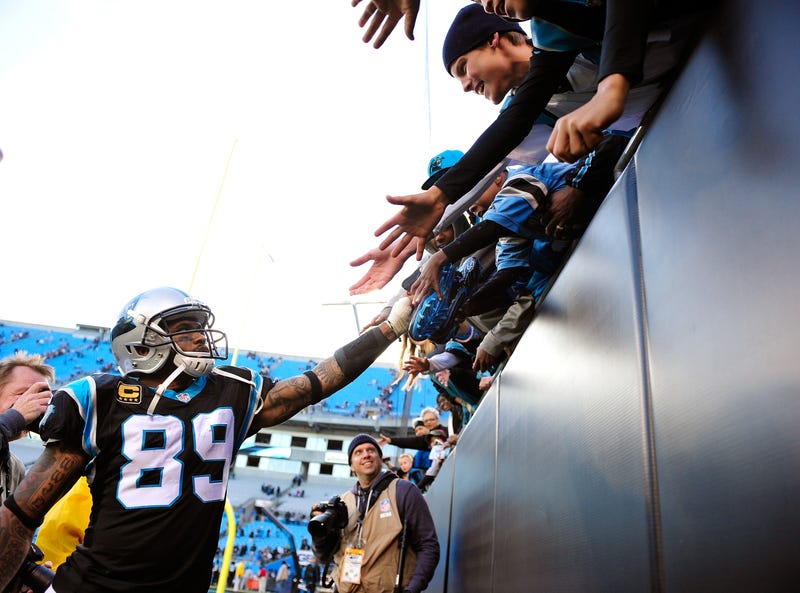 There’s obviously a consensus emerging here, at least among the top four. The fact that all of these terrific players debuted after 1980 speaks to the evolution of the game. Clearly there’s some recency bias at play, but it would also be weird to force a Lynn Swann or Don Maynard, excellent players in their own right, into a list like this. There’s no statistical argument for it owing to the change in style of play, and it’s hard to make an “eyeball test” argument when comparing athletes of yesteryear to today’s players, who are bigger, faster and stronger.

What is there to say about Rice that hasn’t already been said? Rewatching his highlights, the grace and smoothness of his game still stand out. He didn’t necessarily look like the fastest guy on the field, but the countless defenders he left in his dust on all those slant-and-go touchdown catches suggest otherwise.

I’ve gone contrarian here with Steve Smith as my fifth pick, over guys like Antonio Brown, Marvin Harrison, Isaac Bruce and others. I’ll give Smith the nod over AB owing to his longevity, and over Harrison and Bruce owing to their favorable situations in pass-happy offenses in domed stadiums. 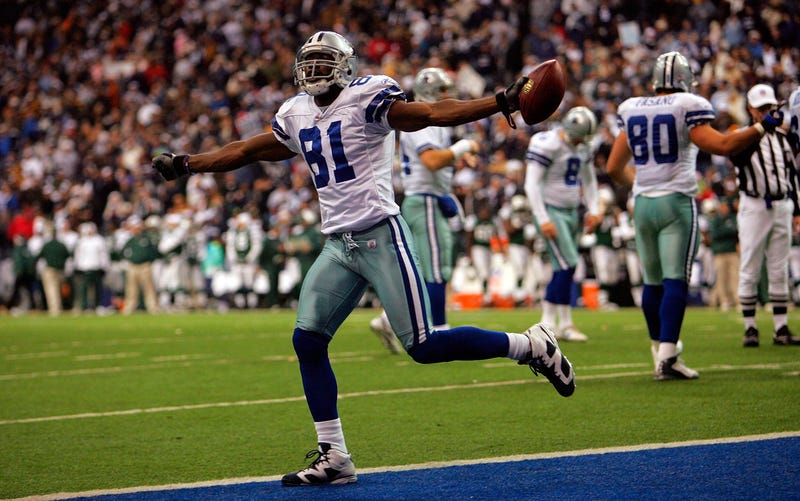 So to recap, that’s four votes each for the core four of Rice, Moss, Owens and Johnson, two for AB and one a piece for Larry Fitz and Steve Smith. There’s probably some merit to what Dan was saying about recency bias (notice Steve Largent and Tim Brown didn’t get much love from this panel), but I suppose that’s to be expected when you put four millennial-ish sports-writers in a room together. Sure, none of us were alive to see James Lofton or Art Monk in their primes, but that doesn’t mean we’re wrong. What say you, humble Radio.com visitor? Feel free to chime in by posting your own top-five to one of our various social media pages. And thanks to Stefon Diggs for getting our creative juices flowing on this fine Thursday morning.