Many factors came into play in the New England Patriots' surprising victory over the Baltimore Ravens, including torrential weather conditions we have yet to experience in the 2020 NFL season. However, one play that may or may not have played a part in determining the outcome of the game drew a substantial amount of attention on social media.

Though a Patriots' drive in the middle of the fourth quarter ended with a punt, it wasn't a three-and-out. Perhaps that should have been the case, however, as a measurement on third down determined that quarterback Cam Newton did in fact reach the first down, while a video replay doesn't provide any definitive support that this was the case.

After the play was over, an official seemed to go against his initial spot and move the ball in a rather unofficial fashion, which many Patriots fans viewed as a generous spot (and many Ravens fans saw as a brutal call).

lmao seems fair... who cares if we scoot it a touch after signaling he’s short and position our right foot short of the line... who’s watching this anyway pic.twitter.com/kz7bTX5eC3

Some personalities, like RADIO.COM Sports' own Nick Kostos, were outraged with the spot.

This officiating is actually insane

This is actually insane. The league should have to address this video. It's lunacy. You cannot allow this to happen. https://t.co/uk2ZlNdipj

It's just wild to me that the NFL allows these crews to go out there and embarrass themselves week after week. Tonight has been an unmitigated, incompetent disaster. Give me robots.

Former running backs Terron Ward and JacQuizz Rodgers were among those who agreed with Kostos in his analysis of the play.

Yea man these refs need to start getting fired lol

That was absolutely absurd. The ref had him marked 1/2 a yard short, his colleague had the spot on the other side, and then he put the ball down on his wrong foot and gave it to them, and BAL didn't challenge that?

Pro Football Network's Mike Tanier was just along for the ride through Twitter.

Been watching guesswork spots for over 40 years. I've made peace with them.

There was also a group of fans, including 610 Sports Radio Kansas City's Cody Tapp, who thinks that calls like this need to be eradicated from the NFL with a new systemic approach.

This industry is worth too much money to keep letting this be the way to measure a first down. He trips snd it’s with a few feet pic.twitter.com/cYNZGizVtH

Lol the NFL needs to completely overhaul how refs spot the ball. World-class technology everywhere else, but on crucial plays, “eh, just eyeball it.”

Again, the play ultimately may have proved meaningless. At the most, it took away a small chunk of clock from the Ravens in their subsequent drives in their attempt to mount a comeback in the pouring rain. Regardless, its just another example of how armchair referees — a group that frequently includes analysts and players — have been angry with the officials in 2020. 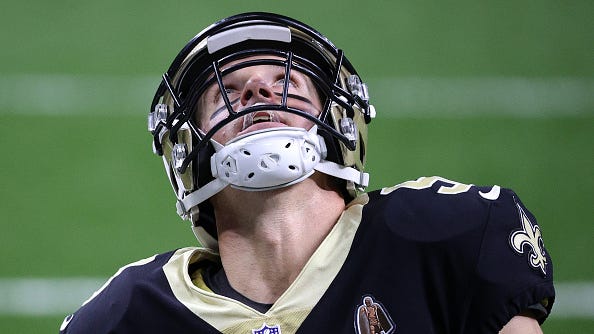 Richard Sherman, others furious roughing the passer is called on Drew Brees sack: 'No sense at all'