If this NFL offseason hasn't turned you into a believer that anything can happen, I'm not sure what will. Tom Brady goes to the Buccaneers. Roger Goodell is announcing draft picks from his basement. And now, in the latest news, multi-Super Bowl champion-turned-professional wrestling champion Rob Gronkowski is not only going back to football, but going back to his role as Tom Brady's security blanket and hulking red zone target.

Trade, pending physical: Patriots are trading TE Rob Gronkowski and a seventh-round pick to the Buccaneers for a fourth-round pick, source tells ESPN.

Update: Rob Gronkowski already has taken his physical in Boston with a neutral physician and is awaiting the official results, though one source added he believes he passed “with flying colors.”

Once physical is passed, Gronkowki will be a Buc and reunited with Tom Brady.

You just can't make this stuff up. As much entertainment as Gronk has provided us over the years, this news drop might take the cake.

That is, unless you're a Falcons fan, a Panthers fan, or possibly a Pats fan. In those cases, you might not be soaking in the crazy trade as much as you are fuming at the circumstances.

Who should be angry? Who should be thrilled? Let's break down the winners and losers of this completely unexpected transaction. 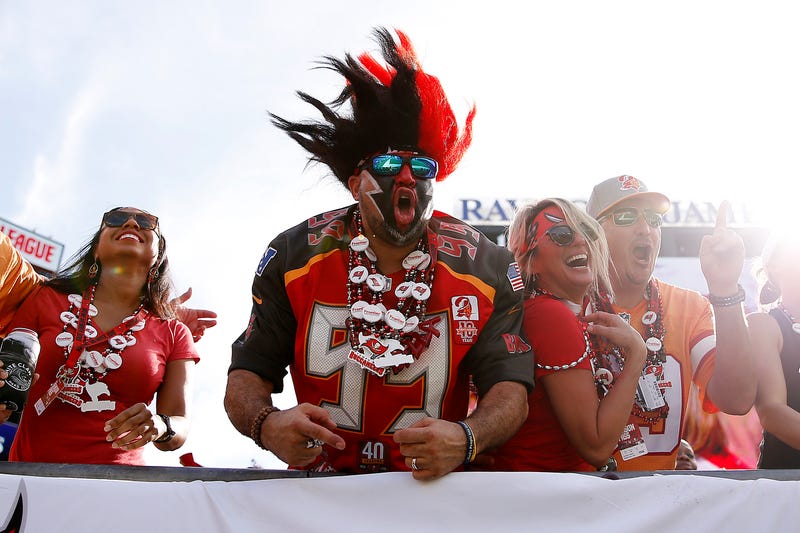 Buccaneers fans will get to watch Brady and Gronk work their magic. Photo credit Getty Images

This one's obvious. I don't care who the fourth-rounder is that they could have selected instead of swapping the draft pick for Gronk. No matter who it was, I can practically guarantee that they weren't going to have as great of an impact as Gronk will when reunited with Tom Brady. Buccaneers fans have seen their franchise completely turn on its head overnight. One of the most dangerous duos in NFL history -- a duo whose journey anywhere else would have seemed downright laughable a year ago -- is ready to suit up in Tampa Bay. And as a result, they see their odds and their hype shoot up.

Odds changes for Tampa Bay Bucs off of Rob Gronkowski news (and a few respected bets) at @CaesarsEnt:

It's not only about the team's performance, though. Gronk is one of the biggest moneymakers and personalities in the NFL, due to his name recognition, behavior and interactions with fans and media. Reporters and journalists will get to partake in one of the most entertaining media circuses the league has ever seen. The organization is going to rake in money in an unconceivable amount of ways.

The Buccaneers' players will get to witness some of the greatest chemistry in history unfold before their eyes and play for a team that sees its legitimate Super Bowl chances take another significant leap up. We're already witnessing just how much fun these guys are going to have with Brady and Gronk in town.

This isn't just a win for the Bucs. This is a win of epic proportions. This is a last-second, lead-changing, overtime touchdown type of win. 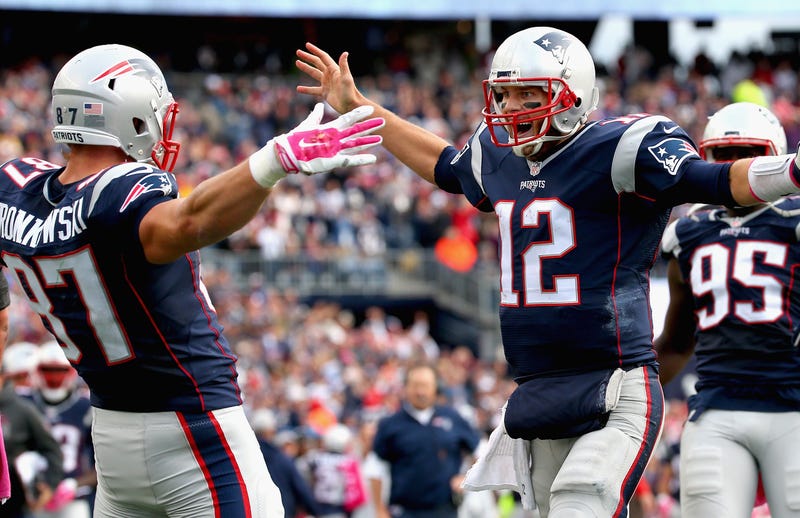 Brady and Gronk had chemistry like few others have ever demonstrated. Photo credit Getty Images

Gronk got his wish. He's playing football with Tom Brady, he's living in an amazing part of the amazing state of Florida and he completely filled the spotlight again after months and months of speculation regarding his possible return. He fooled us all, though he was never completely and definitively committal about either side of the "will he ever play again" debate.

But he will play again, and he'll play for a team with win-now inspirations and with a familiar face throwing him the ball. And for Brady, the feeling is most-certainly mutual.

Could this get any sweeter for the Bills Mafia? First, the Patriots' greatest player of all time gone, with Jarrett Stidham and a potential newcomer in his wake. Now, the reunion between Brady and Gronk outside of New England, much to the chagrin of Patriots fans, has a minute effect on the rest of the AFC East. The Bills, Jets and Dolphins don't necessarily come out on top as winners, per se, as it didn't seem likely that Gronk was going to come back and play for the Patriots at any time soon. However, this should be a riot for those teams' respective fan bases.

In all likelihood, Gronk was never going to play football again if Tom Brady wasn't the quarterback. And though the Pats were losers in the Bucs' signing of Brady, the damage had already been done at that point. Brady was gone, and Gronk wouldn't play without him.

Two years ago before the draft, the Patriots agreed to trade Rob Gronkowski to the Lions, but Gronk informed them he’d opt for retirement over playing with a QB other than Tom Brady. Now after a year of retirement, Gronk hoping for a pre-draft trade to reunite with his former QB.

So is it better to have to pay a retired player's contract without realistic hopes of him ever returning, or is it better to swap him for a mid-round draft pick as you begin a franchise rebuild?

When you look at it that way, it's an absolute win for the Patriots. 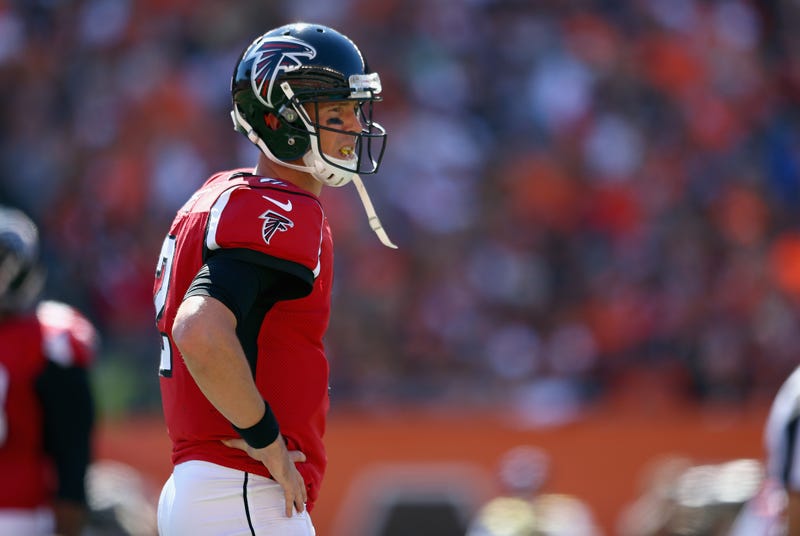 The outlook for the Falcons and other NFC South teams are bleaker with the arrival of Gronk in Tampa Bay. Photo credit Getty Images

The Rest of the NFC South

The Falcons are probably the team that takes the biggest hit in this deal, as many thought of them to be the primary competition for the Buccaneers in the race for second place behind New Orleans. However, it goes without saying that any team that goes up against Brady and Gronk twice per year should be considered a loser. Given the weapons that fill out the rest of Tampa Bay's roster, it's not so unreasonable to think that the Bucs can be the best team in the conference. Hate him or love him, Gronk makes this team a lot better, and that makes all three NFC South competitors losers in this equation.

Note that the Patriots, as a team, are winners. But you likely can't say the same about the fan base. This has been a completely tumultuous time to be a Patriots fan, especially if all you've known is Brady and Gronk, Gronk and Brady, Super Bowl here, Super Bowl there, etc.

Not only will this not be the year that the Patriots win a Super Bowl, unless Bill Belichick has some crazy tricks up his sleeve. What makes it harder is that Pats fans will get to hear about the core of several championship-winning teams working its magic for another squad. Though there are probably a handful of guys who will enjoy basking in the nostalgia of watching Brady and Gronk do their thing, I get the sense that it will inspire more frustration than anything else.

Belichick has lost two of his most-prized possessions, and you wonder if they were looking for a change of culture at the end of their careers after playing for Belichick for a long, long time. This isn't a knock at the coach at all, knowing that he is undoubtedly one of the greatest masterminds in NFL history and that Brady and Gronk likely wouldn't have had near the same success without Belichick's wizardry from the sidelines. However, he definitely got the short end of the stick in both the Brady and the Gronk deals, and will have to start from scratch in 2020 -- at least on the offensive side of the ball.

He retired from Belichick. 🤷‍♂️

Well, that didn't last very long. I'm not sure if they can keep the story line going, seeing as Gronk is currently the WWE's 24/7 Champion, but they're going to have to find a way to smoothly transition out of the Gronk era.