A New York Rangers prospect's video chat with fans was marred by a barrage of racial slurs in the comments section on Friday.

New York defenseman K'Andre Miller's Q&A with fans on the video conferencing platform Zoom was derailed when the epithets began flooding into the comments under several different user names.

The interview continued after comments were disabled, and it was unclear whether Miller was aware of the incident. 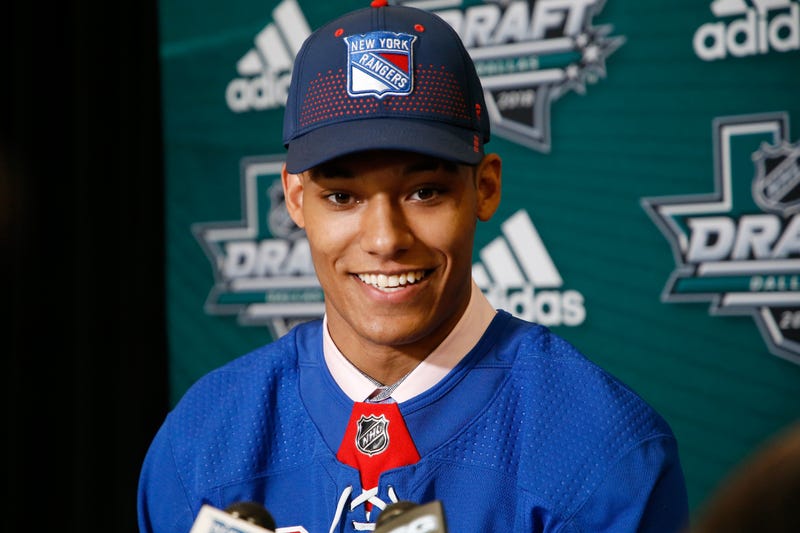 The Rangers and the NHL condemned what they called an act of hacking, and an ESPN report said the FBI was informed of the incident.

"We held an online video chat with fans and New York Rangers prospect, K'Andre Miller, during which a vile individual hijacked the chat to post racial slurs, which we disabled as soon as possible," the Rangers said in a statement. "We were incredibly appalled by this behavior, which has no place online, on the ice, or anywhere, and we are investigating the matter."

The league echoed a similar sentiment.

"The National Hockey League is appalled that a video call arranged today by the New York Rangers to introduce their fans to one of the League's incoming stars, K'Andre Miller, was hacked with racist, cowardly taunts. The person who committed this despicable act is in no way an NHL fan and is not welcome in the hockey community.

"No one deserves to be subjected to such ugly treatment and it will not be tolerated in our League. We join with the Rangers in condemning this disgusting behavior."

The chat was one in a series of similar Q&A-like sessions between players and fans during the NHL's suspension due to coronavirus.

Miller, a 20-year-old defenseman out of the University of Wisconsin, was drafted 22nd overall in 2018, and signed a three-year deal with the Rangers in March after his sophomore season in Madison. The 6-foot-4 prospect tallied 18 points in 36 games in 2019-20, according to the Badgers' official site.