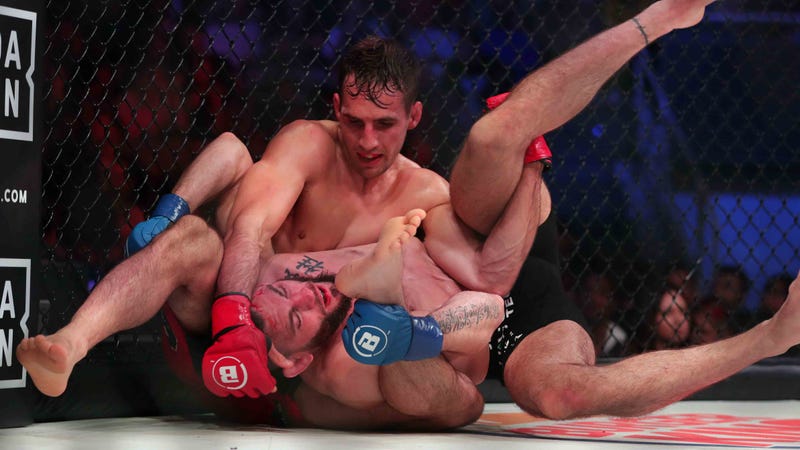 Rory MacDonald, one of the best mixed martial artists ever to fight in the welterweight division, retained his title in a strange, tentative draw against veteran opponent Jon Fitch last weekend in the Grand Prix quarterfinals at Bellator 220. Then MacDonald gave one of the most candid post-fight interviews you'll ever see, revealing his ambivalence and doubts about continuing to fight.

Fitch tried for five rounds to take the more talented MacDonald to the mat. MacDonald landed the significant strikes throughout the fight and put Fitch in some compromising situations, but seemed to allow Fitch multiple opportunities to recover. In the end, the fight had to go to the judges' scorecards. One judge scored it 48-47 for Fitch, the other two had it 47-47, which created a majority draw that allowed MacDonald to keep the belt and advance to the next round of the Grand Prix.

"It takes a certain spirit to come in here and put a man through pain and stuff," MacDonald said afterward. "I just don’t know if I have that same drive to hurt people anymore."

The comments jibed with a recent interview the 29-year-old MacDonald gave to our "Outside the Cage" podcast in which he expressed that he has been thinking about his post-fighting career.

MacDonald put out a statement Tuesday confirming he is still on to fight Neiman Gracie in the next round of the tournament at Bellator 222 on June 14 at Madison Square Garden: "To be clear, I am not retiring from my professional MMA career, I’ve always been true and honest in the sport and I spoke from the heart."

The fight against Gracie will be interesting. MacDonald looks to be on the verge of stepping away from the sport, and it almost feels as if we're watching a man reluctantly risking his life for our entertainment. MacDonald's coach, Firas Zahabi, says that is not the case and MacDonald has plenty of fight left.

On the other side, it may have been the last career fight for the 41-year-old Fitch, who has been suffering from major injuries. Fitch said after the fight that he told himself he would retire if he lost to Jake Shields in 2016. He won, and won two more fights after that, always keeping the same mindset that he would retire after a loss. Technically, he did not lose to MacDonald either. If something changes that gives him the spot on the MSG card against Gracie, Fitch would be all for it.

Here is a look at some of the other winners and losers from the weekend and what's in store for them:

Jacare Souza (lost to Jack Hermansson via unanimous decision): The 39-year-old Brazilian may hang up his gloves after getting dominated by his younger Swedish opponent for five rounds in a UFC middleweight bout last Saturday night in Fort Lauderdale. Souza's manager said his fighter intends to fight again, but did not go in to much more detail. UFC pushed Souza to accept the fight as a last-minute replacement by dangling the carrot of a middleweight title shot were he to win. With the loss, he will plunge from No. 4 in the rankings, and does he have enough years left to make another run to the top? It seems like too steep a challenge at this stage in his career.

Jack Hermansson (defeated Jacare Souza via unanimous decision): With the recent rise of talent in the middleweight division, a title shot seems at least three or four fights away. Robert Whittaker fights Israel Adesanya later in the year to unify the belts, and Kelvin Gastelum, Yoel Romero, Chris Weidman and the recently suspended Paulo Costa are ahead of Hermansson in line.

Ilima-Lei Macfarlane (defeated Veta Arteaga via third-round doctor stoppage): Macfarlane successfully defended her Bellator flyweight title and remained undefeated as a pro, running her record to 10-0. A hard-fought battle against Arteaga ended early after Macfarlane's sharp elbow sliced open Arteaga so bad there was no way to continue the fight. There aren't many challenges for Macfarlane in Bellator's flyweight division. In a recent interview with "Outside the Cage," the 29-year-old said she would be interested in fighting UFC's Liz Carmouche, her good friend. Can Scott Coker and Dana White make it happen? In lieu of that unlikely dream match, Macfarlane said she would be willing to run it back with the 31-year-old Arteaga after the Boise native put up a good fight.

Greg Hardy (defeated Dmitry Smoliakov via first-round TKO): The inevitable happened. UFC found someone for the disgraced former NFL star to beat in a co-main event fight on ESPN+ to legitimize him as a top heavyweight contender. The reality is Hardy is still a ways away from contending with the likes of Francis Ngannou or Stipe Miocic or a veteran such as Andrei Arlovski. But the win did spotlight the 30-year-old's knockout power and athleticism at 6-feet-4 and 265 pounds. Can UFC continue to line up tomato cans for Hardy until he's ready to take on a legitimately formidable opponent?

Mike Perry (defeated Charles Oliveira via unanimous decision): "Platinum" Perry is my favorite fighter right now. There, I said it. His wild altitude and absolutely nasty knockout power puts him up there with some of the best knockout artists ever in MMA. Perry, a 5-foot-10 welterweight, has been unable to fix some other holes in his game, such as his ground game or his ability to close distance without taking punishment. Perry appeared to take a very important step in the right direction by beating Oliveira at UFC Fort Laurderdale. Rumors of Perry versus Darren Till surfaced last year, but disappeared after Perry lost three out of four fights. Now that the 27-year-old Perry has won two of his past three fights and the 26-year-old Till has lost two in a row, the two may be destined to meet. Whomever UFC decides to put Perry up against next, it is certain to be a show.