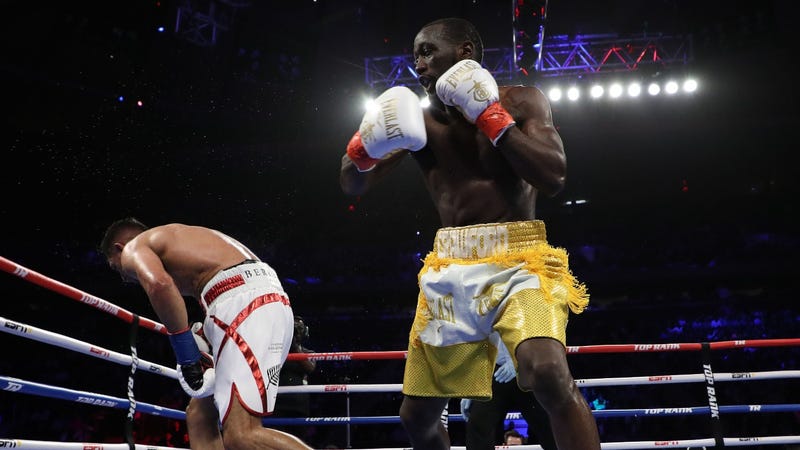 What was turning into a fantastic night of boxing inside a packed Madison Square Garden ended abruptly when undefeated WBO welterweight champion Terence Crawford, the No. 2 ranked pound-for-pound fighter in the world, recorded an anticlimactic TKO victory over Amir Khan following an inadvertent low blow.

The fight was meant to propel the 31-year-old Crawford, who fights out of Omaha, Neb., to a new level of stardom by showing off his elite skill, relentless pacing, punching power and showboating-free style to the educated boxing crowd inside MSG and the worldwide audience on ESPN pay-per-view. Instead, the headline of the night was the low blow.

The low blow that caused Khan to quit in round 6. Khan had 5 minutes to recover but took less than 1 before telling his corner he couldn’t continue. DQ happens only when a low blow is intentional #crawfordkhan #crawford #terencecrawford #amirkhan #espn #toprankboxing #espnboxing pic.twitter.com/MqzIvudT5t

Crawford (35-0) landed the biggest shot of the fight in the first round. Crawford saw a lazy punch from Khan coming from a mile away and quickly countered with a huge right hand over the top, sending Khan reeling to the canvas and sending the crowd into an early frenzy. Khan survived the round, though badly dazed, but from there Crawford was in full control. Crawford gained confidence and momentum, switching stances and appearing unafraid of Khan’s countering ability. The fight looked as though it were building toward a highlight-reel finish for Crawford.

Instead, the low blow: Crawford unintentionally landed a vicious left hook to Khan's groin at the :47 mark of the sixth round. Referee David Fields confirmed that Khan’s trainer Virgil Hunter was stopping the fight because he felt his fighter was unable to continue.

Crawford showed a little frustration in the post-fight press conference, saying in a monotone: “I knew that (Khan) was looking for a way out. Him and Virgil was having a conversation. I don’t know what the conversation was about, but Amir just kept shaking his head, and I was like, ‘Oh, man, he about to quit.’ And I was right, that’s exactly what happened.”

Khan, a former champion from Great Britain whose record fell to 33-5, was late to the press conference, but did not shy from facing the media with his battered face.

“I would never quit, I’d rather get knocked out,” Khan said. “He’s a great fighter, he beat me tonight and we just have to move on.”

Though some boxing purists would like to see Crawford run it back against Khan and get the “clean” knockout many thought he would, Crawford has a different opponent in mind for his next fight. Crawford wants to face the undefeated Errol Spence Jr., who’s coming off a huge victory over Mikey Garcia last month at AT&T Stadium. Spence, a Texas-based Long Island native, would be Crawford's toughest test yet.

“Everybody know I want the Spence fight next to prove I’m the best welterweight in the division,” Crawford said. “Unfortunately, I don’t know what’s going on, so until then that’s where we at.”