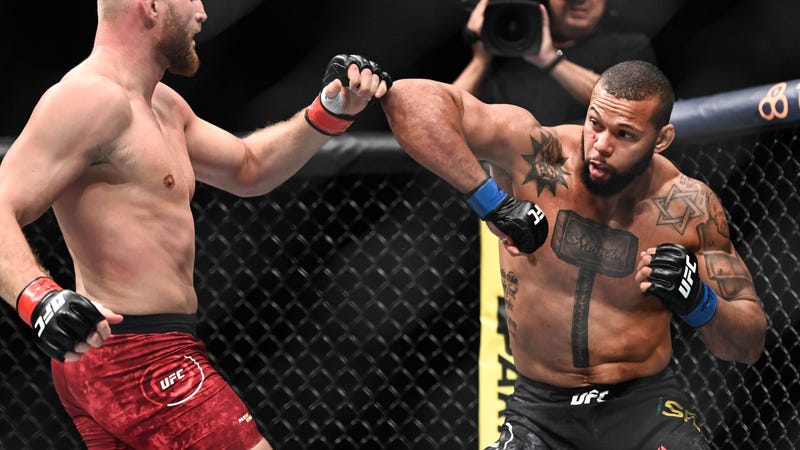 The light heavyweight title is up for grabs at UFC 235 this weekend as champion Jon Jones defends against Anthony Smith. Both fighters should have had an eye on the main event this past weekend at UFC Fight Night 145, aka UFC on ESPN+ 3, in Prague, where the next in line for a title shot just made a huge statement.​

There was a finish in the main event, even if it took a little longer than expected. In the third round, Santos backed up and threw a nasty combo that connected flush on Blackowicz's chin and dropped him to the mat. Herb Dean gave the Polish fighter plenty of time to adjust his position, but Santos rained down hammer fists and the fight was finally waved off.

The 35-year-old Brazilian is now victorious in eight of his last nine fights, recording his third consecutive win since moving up from middleweight. After the win, Santos called for the winner of the Jones-Smith title fight. Santos finished Smith last February when they were both middleweights and appears confident he can do it again. If he doesn't get the title fight, Alexander Gustafsson is another highly ranked light heavyweight on the radar.

Struve, the veteran 7-foot heavyweight from the Netherlands, recovered from an early knockdown strike from de Lima and was able to get the submission, ending a three-fight losing streak. Struve, 31, become overwhelmed after the fight as he spoke of retirement. Health issues in recent years kept Struve from his goal of fighting for the UFC title, and now his MMA career seems to be over. It's nice to see things end with a win.

After his win, Stefan Struve said that might have just been his final fight. He didn’t say it was 100% but he took his gloves off, put them in the center and was very emotional. pic.twitter.com/ilwmovmtTK

Michal Oleksiejczuk def. Gian Villante, via TKO, 1:34 of first round

Oleksiejczuk was up for the challenge in this light heavyweight bout against Villante, a rough-and-tumble Long Island native. The 24-year-old native of Poland was strategic and looked for body shots, landing a direct shot to the liver that made Villante's body shut down.

Michał Oleksiejczuk (13-2, 1 NC) returns with a bang, crumpling Gian Villante in one round! A left to the liver extends the Pole's unbeaten streak to 11. "Lord" has finished 10 of 13 wins, nine by knockout. #UFCPrague pic.twitter.com/lHCMAQj6N8

The typical declining veteran versus rising star narrative. Dodson, 34, won TUF 14 by knocking out current champ TJ Dillashaw, but has had mixed results throughout his eight years in UFC, moving back and forth between flyweight and bantamweight divisions. Yan, a 26-year-old Russian, entered on a six-fight win streak.

Dodson knocked down Yan once, but could not capitalize. Yan dictated the pace, landed nearly three times as many strikes and won the decision easily. In his post-fight interview, Yan expressed interest in fighting Jimmie Rivera in June. Rivera has lost two of his last three fights, most recently to Aljamain Sterling last week at UFC on ESPN 1.

Buzzer-beaters are extremely rare in MMA -- or at least they used to be. Grant swung for the fences with the clock ticking down in the first round and scored the knockout in just his second UFC fight. The 34-year-old welterweight should have no problem getting another opportunity in the very near future.

A very focused Robertson stuck to her game plan to take down Macedo as soon as possible. Macedo, a 23-year-old from Valenzuela, eventually made a rookie mistake and gave up her back. The 23-year-old Robertson was waiting for that moment, and sunk in a deep rear naked choke to end it.

Hear what a very happy Gillian @Savage_UFC Robertson had to say after her #UFCPrague submission victory 🔊🆙 pic.twitter.com/hCXN5LeWnu

Robertson, perhaps motivated by a hack of her Instagram account, delivered a highly impressive performance. The Canadian fighter training out of American Top Team should crack the top 15 in the women's flyweight division. Expect to see Antonina Shevchenko, Mara Romero Borella or Jessica-Rose Clark as her next opponent.

A bonus segment for the kind of wild fight that takes over an entire card. This was one-sided and highly entertaining. Enjoy the madness, and look for Pereira to get a call to one of the bigger promotions in the near future.

Michel Pereira is a nutcase, and we should love him for it. #ROADFC052 pic.twitter.com/HMc89WmRgn