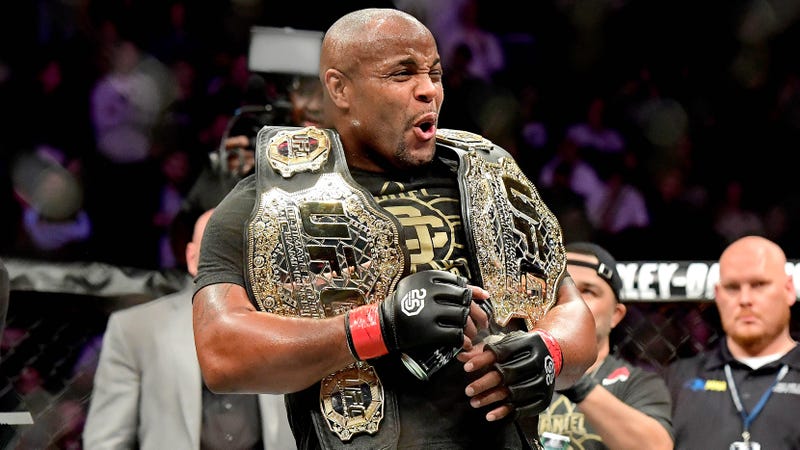 The top of UFC's heavyweight division has been calm in recent months. Junior Dos Santos knocked out Derrick Lewis last weekend in a matchup of two top-10 heavyweights at UFC Fight Night 146 in Wichita. Did the second-round TKO move Dos Santos into the top five in the rankings?

Let's take a look at the current pecking order in the heavyweight division:

Daniel Cormier, champion: Cormier, who turns 40 later this month, has not fought since defeating Lewis in a low-risk fight at UFC 230 in November. Last July, after becoming Champ-Champ in the light heavyweight and heavyweight divisions (he later relinquished the light heavyweight belt), he was adamant he only had two fights left in him. Cormier is looking to cash in on what could be the final fight of his MMA career, and has his eye on Brock Lesnar, who is currently a champion ... in WWE.

Cormier's retirement plans are on hold as he recovers from a hand injury and Lesnar remains committed to a WWE appearance at WrestleMania 35 in April. UFC president Dana White has said Lesnar is next in line for Cormier, but whether or not that will be the final fight of the heavyweight champion's career is still in question. If White has his way, we may see more of Cormier than we have been led to believe. 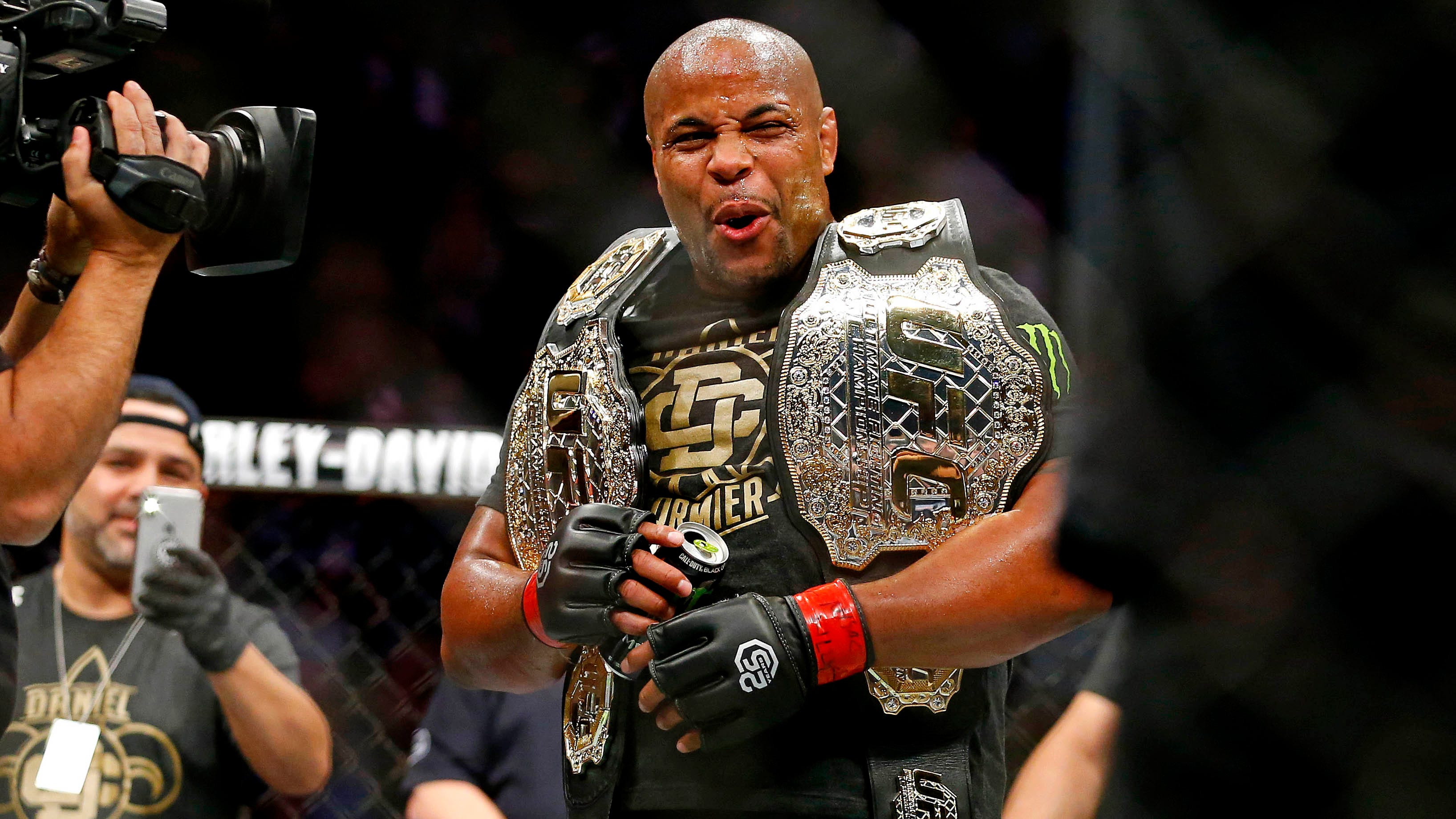 Daniel Cormier Is The Best Version of UFC

Stipe Miocic (ranked No. 1) and Francis Ngannou (ranked No. 2): Both fighters are sitting at the top of the division with no place to go.

Miocic, a 36-year-old Ohio native, hasn't fought since losing the heavyweight title to Cormier last July. He has been highly vocal about getting a rematch for the belt, but Cormier has declined multiple times as he waits to cash in on the Lesnar fight. Until then, Miocic -- who holds the UFC record for most consecutive heavyweight title defenses with three -- is in limbo.

Ngannou has been a bit more active since his title-fight loss to Miocic in January 2018. Six months later, Ngannou took an unexpected, embarrassing loss to Lewis at UFC 226. The 32-year-old native of Cameroon went completely gun-shy, landing 11 total strikes in 15 minutes in what was an all-time terrible fight. White went on to call the performance by both fighters an "abomination." Since that head-scratching performance, Ngannou has knocked out Curtis Blaydes and former heavyweight champion Cain Velasquez in a combined 61 seconds. Having fought his way back to the top of the division, Ngannou is waiting around for another opportunity at the belt. Prior to defending his light-heavyweight title at UFC 220, Cormier went on record saying he would never move up in weight class to fight guys such as Ngannou. Considering he did move up in weight class, won the belt and has successfully defended the belt, maybe he will have a change of heart. Ngannou is likely to stay active, but he would be risking his place at the top of the division.

Junior Dos Santos (ranked No. 3): The 6-foot-4 Brazilian is coming off the huge knockout win over Lewis. He may be a brawler, but he's a smart brawler. He focused in on the 34-year-old Lewis' weakness, his stomach, softened him up and finished him early in the second round.

Cracking the top three has put the 35-year-old former champion in an odd position. The likelihood of convincing Cormier to accept a challenge from Dos Santos is slim to none: Lesnar, Miocic and even another go-round with Jon Jones are bigger-money options.

If Miocic gets sick of waiting around, Miocic and Dos Santos could complete a trilogy (they each have a win over the other). Some fight fans are clamoring for a Ngannou-Dos Santos matchup. Any time you can put together two heavyweights who aren't afraid of exchanging, it winds up as a fight of the night. One of these two fights makes sense for Dos Santos and can be a labeled a title eliminator as a main event on a UFC on ESPN card.

Curtis Blaydes (ranked No. 4) vs. Justin Willis (ranked No. 10): Blaydes, a 28-year-old with a wrestling background, has had an almost flawless UFC career. That is, if you remove the win that was turned into a no-contest after he tested positive for marijuana and remove his two losses to Ngannou. The first loss to Ngannou was due to a controversial doctor's stoppage after the second round; Blaydes was holding his own despite his eye being nearly swollen shut. The more recent loss was the opposite of controversial: Ngannou caught Blaydes early, often, and repeatedly until the ref stopped the fight.

Blaydes has a big rebound fight in front of him on March 23 against Willis. It's a major risk: A win won't change his status, but a loss will push him out of the top five. Willis has knockout power, but if Blaydes can avoid major damage when shooting for a takedown, the Illinois native should be able to work his ground-and -pound game for a win and stay at the top of the heavyweight division.

Alexander Volkov (ranked No. 6) vs. Alistair Overeem (ranked No. 7): These two heavyweights are scheduled to face off on April 20 at "UFC on ESPN+ 7" in St. Petersburg, Russia. Volkov, a 30-year-old-Russian, is coming off an upset loss to Lewis in the final seconds of a three-round fight at UFC 229. Volkov was putting on quite the show until he allowed Lewis to stand up and exchange strikes. Lewis landed a knockout blow with 11 seconds left.

Volkov next draws Overeem, a 38-year-old Dutch veteran of 62 professional fights (including 15 in UFC). The former kickboxer, who fought for the heavyweight title against Miocic at UFC 203, has had some huge victories and suffered some damaging knockouts. The worst was being on the wrong side of a Ngannou uppercut.

Overeem always puts on a show for the fans, one way or the other. At his age, with his mileage, it's unrealistic to think Overeem has another title run in him, but a win over Volkov could shut up the doubters.