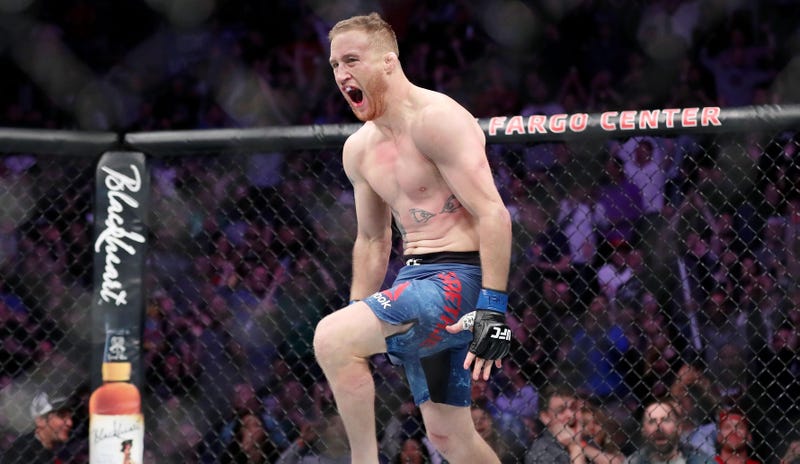 What to most people was just an average early-spring weekend was in fact full of fireworks for MMA audiences. The stunning knockouts in UFC, Bellator and ONE Championship will have consequences across the fight scene.

What happened: The most anticipated fight of the weekend came Saturday night as UFC landed in Philadelphia for its second broadcast on cable ESPN. Gaethje and Barboza were scheduled for a five-round main event, which was just a formality for two of the best strikers in the lightweight division. Everyone watching expected it to end way before the final bell, and they were right. Gaethje showed his brawler mentality and awesome punching power by finishing Barboza midway through the first round.

What's next: The lightweight division is at a semi-standstill until Max Holloway and Dustin Poirier fight for the interim title later this month at UFC 236. According to UFC president Dana White, lightweight champion Khabib Nurmagomedov will make his return to action in September following a lengthy suspension. The next logical fight for Gaethje would be against the likes of No. 1 contender Tony Ferguson.

What happened: This featherweight fight was Emmett's first since suffering a vicious knockout by Jeremy Stephens 13 months prior that caused major damage to his orbital bone. Johnson looked to be out-pointing Emmett for the majority of the fight, but one mistake late in the third round gave the 34-year-old Emmett an opening to show off his one punch-power that left Johnson flat on his back.

What's next: Emmett possesses real power for the featherweight division. He still has holes in his game, but can make up for any flaw with one flush strike. Emmett likely needs to take on another young up-and-comer before getting a top-five opponent. Three fighters that make sense for Emmett: Yair Rodriguez, Calvin Kattar or Chan Sung Jung. All three create their own difficulties, and a win would prove to UFC that Emmett is fully recovered his injuries and can compete with the best in the division.

What happened: This was just the fifth professional fight for the 25-year-old Davis, who is relatively new to the sport. But his knockout of Anthony on Friday night was nasty and impressive.

What's next: Bellator's roster has a mix of veterans and exciting young prospects. The 5-foot-11 Davis, who fights out of Compton, Calif., is ranked No. 243 in the world. If he continues building up highlight-reel knockouts, the opportunity to fight a tough veteran may come sooner than you think. An interesting fight would be undefeated Austin Vanderford.

What happened: Straus, 34, was in a motorcycle accident in December 2017 that left him unable to walk for nearly eight months. Just stepping back into the cage was a win for Straus, but that wasn't enough for the former two-time Bellator featherweight champion.

An emotional moment for @DanielStraus

16 months of recovery results in a triumphant return pic.twitter.com/BVpXuch0R3

What's next: Straus came out of the dominant victory over Kruchten believing he has plenty to improve on. The Cincinnati native has said he's open to any opponent in any weight class for his next fight. If that's the case, 26-year-old lightweight Kevin Ferguson Jr. -- aka Baby Slice, the son of the late Kimbo Slice -- would be a very entertaining challenge.

ONE Championship: A New Era

What happened: ONE Championship has adopted a new approach. The Singapore-based promotion has signed former UFC stars such as Vitor Belfort, Sage Northcutt and Alvarez, a former lightweight champion in UFC and Bellator. The question remained: How does the general talent pool in ONE Championship compare to UFC or Bellator? The early results show the playing field is pretty level: Nastyukhin beat Alvarez convincingly. The 29-year-old Russian's speed was a decisive factor as Alvarez was late on every exchange.

Timofey Nastyukhin SHOCKS THE 🌏! The Russian warrior knocks out Eddie Alvarez at 4:05 of Round 1 to advance in the ONE Lightweight World Grand Prix! #WeAreONE #ANewEra #Tokyo #MartialArts pic.twitter.com/YxUV0TSnFR

What's next: The 35-year-old Alvarez will have to wait a bit longer now for an opportunity to win the lightweight championship in a third different promotion. Nastyukhin advanced to the next leg of the lightweight grand prix to face American-born Lowen Tynanes; the date of the fight is TBA.

What happened: "Mighty Mouse" Johnson, a former UFC flyweight champion who was considered the company's best pound-for-pound fighter while setting a record with 11 title defenses, was "traded" in October to ONE Championship in exchange for welterweight Ben Askren. This was the 32-year-old's ONE debut. It wasn't pretty, but he got the win.

Demetrious Johnson makes a STATEMENT in his ONE debut, submitting Yuya Wakamatsu with a tight guillotine choke at 2:40 of Round 2! @MightyMouse #WeAreONE #ANewEra #Tokyo #MartialArts pic.twitter.com/K4yOpTfmQJ

What's next: Johnson moves on to face Tatsumitsu Wada or Ivanildo Delfino in the semifinal round of the ONE Championship flyweight grand prix. Both fighters are on the taller side for flyweights at 5-foot-7; Johnson is 5-foot-3. His toughest fights have come against taller opponents. It will not be as easy as expected for Johnson to claim the belt.