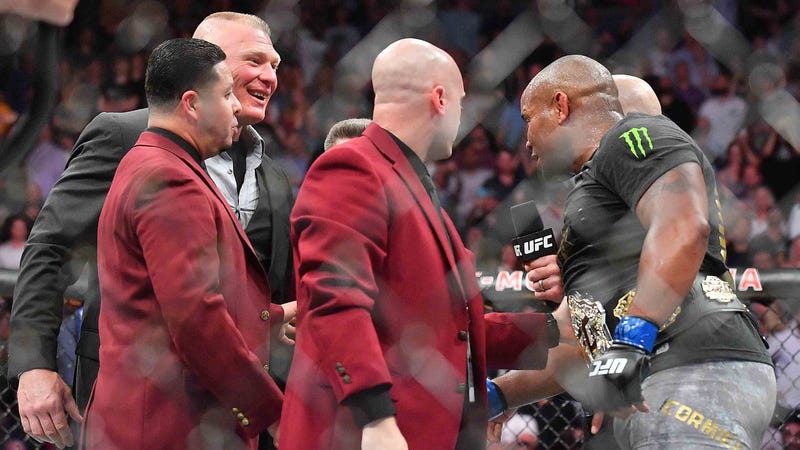 Following UFC 230 last November, a giddy Cormier -- who had just saved UFC’s annual Madison Square Garden event by taking a risky main-event fight against knockout artist Derrick Lewis on short notice and winning by submission -- was clear about two things: He wanted to fight one more time before his 40th birthday in March 2019 and he wanted it to be against Lesnar. Both of those wishes have aged poorly.

White was on board. “That’s the fight that Cormier wants,” White said earlier this month after UFC 236. “Brock Lesnar wants to come back. I don’t (know) when we’ll get it done. Daniel Cormier has done everything we’ve ever ask of him, he’s fought anybody we’ve ever wanted, he’s been a great champion, he’s an incredible ambassador of the sport. If he wants the Brock Lesnar fight, why shouldn’t he get the Brock Lesnar fight?”

But something fell apart for Lesnar (5-3, 4-3 in UFC) on the way to this marquee fight and major payday -- whether he had issues with the drug testing regime, coming to terms on a contract or simply finding the motivation for a non-stop, seven-to-10-week MMA training camp.

Lesnar, a former national wrestling champion at the University of Minnesota and former UFC heavyweight champion from 2008-10, will be 42 years old in July and hasn’t put on the four-ounce gloves since he beat Mark Hunt at UFC 200 in 2016 by asserting his elite wrestling. The result was later change a “no contest” because Lesnar tested positive for performance-enhancing drugs before the fight.

At this point in his career, it seems a much better fit for Lesnar to take his larger-than-life persona back to WWE, where he can enjoy a less physically demanding schedule.

Though a Lesnar fight would have been the biggest in terms of hype and recruiting casual fans, a third fight in his rivalry with UFC light heavyweight champion Jon Jones also would do huge numbers. Jones is the only fighter to beat Cormier. That fight also would please the MMA purists who despised Lesnar’s jumping of the line.

But Jones has a fight scheduled against Thiago Santos on July 6 at UFC 239, and has said he isn’t ready to jump up a weight class unless the money is right. Their first two fights were at light heavyweight.

Still, Cormier-Jones III at heavyweight would be one of the biggest fights in UFC history, pitting Cormier’s dominance in the heavyweight division against Jones' drug-tarnished case as the greatest MMA fighter of all time.