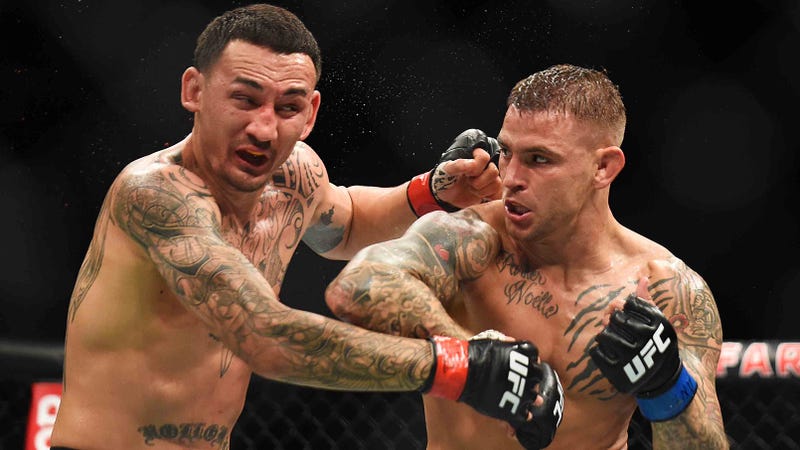 UFC 236 was for the dogs -- the underdogs, that is. Nine of the 13 betting favorites lost on a wild night of fights in Atlanta. The most important upset winner was Dustin Poirier, who captured the interim lightweight belt as a roughly 2-1 underdog against featherweight champion Max Holloway in a riveting main event. That followed a classic co-main event between Israel Adesanya and Kelvin Gastelum for the interim middleweight title. All four fighters walked away with $50K fight bonuses.

Poirier, a 30-year-old Louisiana native, was fighting for a title for the first time in his 31st professional fight. Poirier, though two inches shorter than Holloway at 5-foot-9, had a noticeable three-inch reach advantage. The more natural 155-pounder stalked Holloway and looked to end the fight multiple times. But Holloway showed his championship mettle, never backing down through a series of compromising situations to make it a competitive fight for 25 minutes. Just when it looked as if Poirier was slowing down, the 27-year-old Holloway would throw a barrage of strikes that would make most men buckle. The cardio and the tenacity of the two fighters was off the charts.

Amazing main event fights. How fighting should be!
Max you are insanely tough!
Please rest up now young Uce, you are a warrior head to toe!
A champion FOREVER.
Congratulations Dustin on a much deserved UFC title to your career.
It is Nate next for you like previously scheduled.

I still can’t get over the main and co-main fights last night ! 2 of the best fights I have ever seen one right after the other. Congrats to all 4 of them warriors! 🙌 #ufc236

Poirier won by unanimous decision (49-46 on all three scorecards) to earn the interim belt and a date with lightweight champion Khabib Nurmagomedov. UFC president Dana White pointed to a September fight to unify the lightweight belts. White also acknowledged the long path it took for Poirier to finally get his opportunity at the belt. He beat a great fighter and deserves the opportunity to face Nurmagomedov.

I don’t agree with the judges 49:46, I got a draw, my respect to both fighters, and Porier’s achievement so far cannot be denied, my congratulations Dustin, see you in September. 🦅 vs 💎

It will be a fascinating clash of styles: Poirier, the brawler, looking to make it a stand-up war versus Nurmagomedov's takedown attempts and unstoppable wrestling. In Poirier's 31 career fights, he has lost by submission only once.

Holloway will almost certainly head back down to featherweight and defend his title. Though he was able to last five rounds, the humble Hawaiian didn't look nearly as dominant as he does in the 145-pound division. Frankie Edgar is deserving of one more title shot, though if Alexander Volkanosvki can beat Jose Aldo at UFC 237, he may be the next to challenge Holloway for the title.

Life is chutes and ladders. Sometimes we gotta take that slide down to get to the next big ladder. It is what it is. We keep playing. We keep fighting. Congrats to Dustin and Jolie. They should've already had a belt. Diamonds are forever pic.twitter.com/9IKYoZAg1P

By the tale of the tape, Adesanya-Gastelum was classic David versus Goliath: Adesanya stands 6-foot-4 with an 80-inch-reach while Gastelum is 5-foot-9 with a 71-inch reach. The two put on an instant-classic five-round fight that had everyone on the edge of their seats, couches and bar stools.

Adesanya, a 29-year-old from New Zealand by way of Nigeria, looked to control the stand-up with his smooth style. Gastelum, a 27-year-old from California, did not make it easy. In the fourth round, the heavy-handed Gastelum landed a clean shot that appeared to seriously daze Adesanya, whose legs became wobbly as he looked to find a good spot to lean against the cage and avoid falling to the mat.

The fifth round, as Adesanya wrote on Twitter, "was some legendary s--t." The two went all out trading strikes, and Adesanya put Gastelum on his back with 15 seconds to go. As the clock hit zero, the crowd roared, knowing they had witnessed something special. Adesanya got the decision, 48-46, on all three cards.

Next for up for Adesanya is a date with New Zealand-born, Australia-based middleweight champ Robert Whittaker to unify the belts. White said he is looking for a stadium in Australia that holds at least 60,000 people in which to stage the main event. Gastelum will have his pick of top middleweight contenders looking for the next crack at the title: Yoel Romero, Jacare Souza and Paulo Costa, to name three.

As MMA continues to grow, we're reminded again how global the sport is. Rose Namajunas is set to defend the women's strawweight title fight at next month's UFC 237 against Jessica Andrade in Andrade's native Brazil. The middleweight unification bout between a New Zealand-born Australian and a Nigerian-born New Zealander likely will be fought Down Under. The sport's superstars include Conor McGregor (Ireland), Nurmagomedov (Russia) and light heavyweight champ Jon Jones (upstate New York). White boasted at this weekend's post-fight press conference that in the next two months he will show everyone the future of fighting.

Follow Pete Hoffman, Isaac Feldman and Outside The Cage on Twitter for all your MMA and UFC coverage, and listen to their "Outside The Cage" podcast.