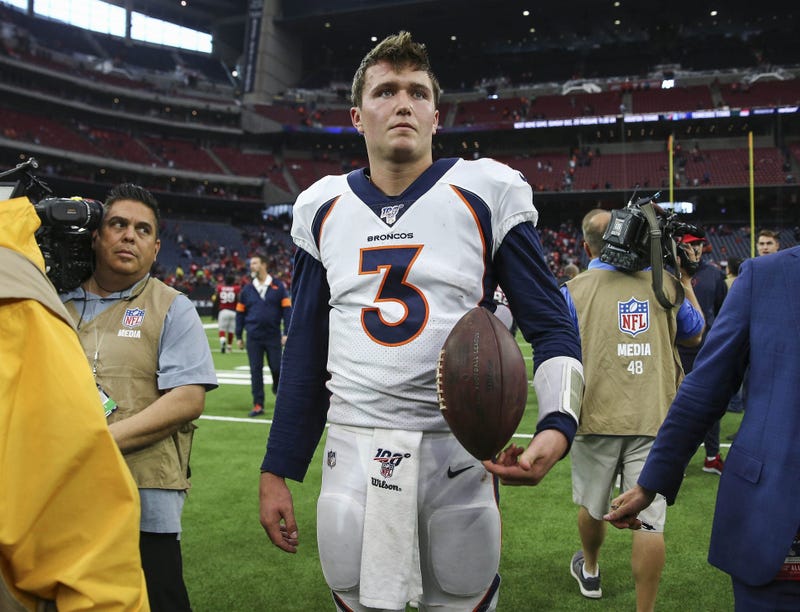 Kareem Jackson, a 10-year veteran defensive back, who spent 9 seasons with the Houston Texans (8-5), returned to NRG Stadium for the first time in a different uniform and made his presence felt with an interception and a fumble return that went for a 70 yard touchdown.

Last weekend, the Texans used a Bradley Roby interception to kick start the game against the New England Patriots. Roby's interception in the Texans week 13 victory, sparked the offense which went on to score 21 unanswered points in route to a 28-22 victory.
This time, it was former Texan Kareem Jackson, whose 70-yard return for a touchdown in the first quarter, gave the Broncos (5-8) the lead for good and took the pressure off of rookie quarterback Drew Lock.

Playing on the road for the first time as a starter, Lock made NFL history, becoming the first rookie since 1950 to have at least 300 passing yards and three passing touchdowns in his first career road start.

Only John Elway (345) and Marlin Briscoe (335) had more passing yards in a game as a rookie in Broncos franchise history.

Lock made his NFL debut in a win over the Chargers last week, throwing for 235 yards with three touchdowns in the first half and didn't seem to miss a beat Sunday as he carved up the Texans' secondary, dialing up seven plays of over 20 yards.

Those big plays of course led to a big number on the scoreboard. Sunday marked just the third time in six seasons the Broncos have scored more than 35 points in a game, doing so once in 2014, 2017 and 2018.

The idea that it came with Lock starting under center for the first time on the road was nearly as baffling as the Texans going for it on a fourth-and-1 from their own 34-yard line with two minutes left, down 24-3 in the first half.

The Broncos, of course, made the Texans pay for that gaffe, scoring on the very first play after taking over on downs to make it a 31-3 game at the break.

Despite really just one bad defensive series last week against the Patriots, when the game appeared to be getting out of hand, the Texans limited the Patriots and prevented the chunky plays that can cost a team and keep a defense on the field for too long.

However, Sunday's loss wasn't just about the big plays the defense gave up, or the turnovers, or even the silly penalties. It was about all of those things and the inability to play consistant andcomplete football games.

Following the game, Texans cornerback Jonathan Joseph was searching for answers himself in regards to the lack of consistency.

"I don't know, it's weird," Joseph said. "If you've looked at the teams that we've lost to, I don't know what their overall record is but other than New Orleans Saints I don't know any that are at the top of their division. Maybe it could be attention to detail, a lapse or whatever it may be.

"For us going forward, we definitely can't have that because obviously we're trying to clinch this playoff berth and have some postseason games, so we just have to move on to the next and not let this happen again."

Most Texans players agreed that the lack of execution contributed to the loss against the Broncos on Sunday and not the lack of preparation.

Both Joseph and Roby said the recent schedule may have contributed to the flat play by the Texans.

"We had two night games in a row and then we came back with a twelve o'clock game, its just a lot of factors man. They (Denver) play in the cold and now they're in the turf and they feel good and they're hyped. We just didn't come out as good as we should have been, Roby said. "Defensively we gave up too many big plays, too many missed tackles, especially me and we've just got to execute better at the end of the day."

In all fairness, Joseph and Roby both said they weren't looking to make excuses, but were just answering questions. They know at this point, for a team to be coming off of one of the most important wins during the regular season, certainly in the Bill O'Brien era, any excuse will fall on deaf ears.

While any type of loss would have most certainly stung regardless of the severity, would have erased any momentum the Texans thought they'd built in last week's big win over the Patriots.

The fact that Sunday's defeat was so ugly, leaves room for plenty of concern and quite simply confirms the Texans are still a team that cannot be trusted.