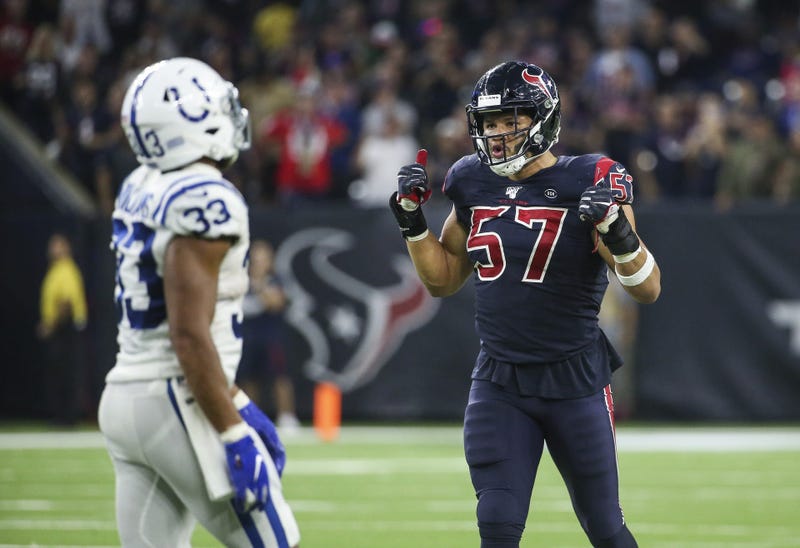 SPORTS RADIO 610 (HOUSTON, TEXAS) The resilient and scrappy Texans were able to make enough plays on both sides of the ball in the fourth quarter to take a much needed game against the Colts, led by the return of the electric Will Fuller who gashed the Indianapolis secondary for 140 yards on seven catches in route to a 20-17 victory over the Colts.

Just four days removed from an embarrassing 41-7 loss to the Ravens in Baltimore, the Texans entered Thursday night's tilt at NRG Stadium not just needing to turn the page, not just needing to compete but needing to win a game that could very well decide whether or not they'll go on vacation in December or beyond.

The Colts (6-5) beat the Texans in their first meeting this season 30-23 in Indianapolis, taking the lead within the AFC South at the time, as Jacoby Brissett threw a career high four touchdowns in that game. Thursday night's game had similar implications on the line in terms of the division lead, but with just five weeks remaining in the regular season and both teams battered, bruised and shorthanded, it had a lot of what you'd demand in a primetime game, and a must win feel was certainly at the forefront for both teams.

Thursday night felt like a must win game for a variety of reasons, but none more important for the Texans than the task of making certain the Colts would not control the head to head tiebreaker scenario in case the two teams wound up tied atop the division at season's end.

The Texans ability to bounce back from a disappointing loss in Baltimore this past weekend and beat the Colts at home just made their road to the playoffs a lot less complicated as they took a one game lead within the division and now control their own destiny with five weeks remaining in the regular season.

The Colts running back duo of Jonathan Williams and Marlon Mack amassed 264 yards on 36 carries in last weekends 33-13 victory over the Jaguars, led by Williams' 116 yards on 13 carries, continued to pound the rock despite missing Mack, their lead running back Thursday night.

Williams and Nyheim Hines seemed to be working just fine as they combied to carry the ball ten times during an 11-play 66-yard drive that ended in a 13-yard touchdown run by Williams to give the Colts a 17-10 lead midway through the third quarter.

The Colts had pounded the rock and almost ran at will against the Texans defense for much of the night. However, the Texans were able to step up and slow the run when the game was on the line to help seal the biggest victory of the season.

Despite allowing 175-yards on the ground as Williams notched his second straight 100-yard game with 104 yards and a score, the Texans forced the Colts to punt twice and held them on downs their final three possessions of the game, including a huge stop by Texans linebacker Brennan Scarlett on a fourth down to tackle Brissett about a half-yard shy of the first down marker on the Colts final offensive possession of the game.

DeAndre Hopkins caught two touchdowns in the victory, along with 94 yards and 6 catches on the night and Deshaun Watson completed 19 of his 30 attempts while taking just one sack after being put down six times last weekend against the Ravens.

It's on to the New England Patriots for the Texans as they get set to host Tom Brady and Bill Belichick, both of whom have dominated the series between the two teams for years. The Patriots holding an 8-1 advantage all-time over the Texans entering the much anticipated week 13 matchup and the second of three straight home games. Aside from the Patriots coming up week 13, the Texans have games remaining with the Broncos, Titans, Bucs and Titans to round out the regular season schedule.

As for the Colts, they hope they can make up Thursday night's loss and the Texans slip up as they are now a full game behind them in the AFC South, with the Titans, Bucs, Saints, Panthers and Jaguars remaining on their schedule.