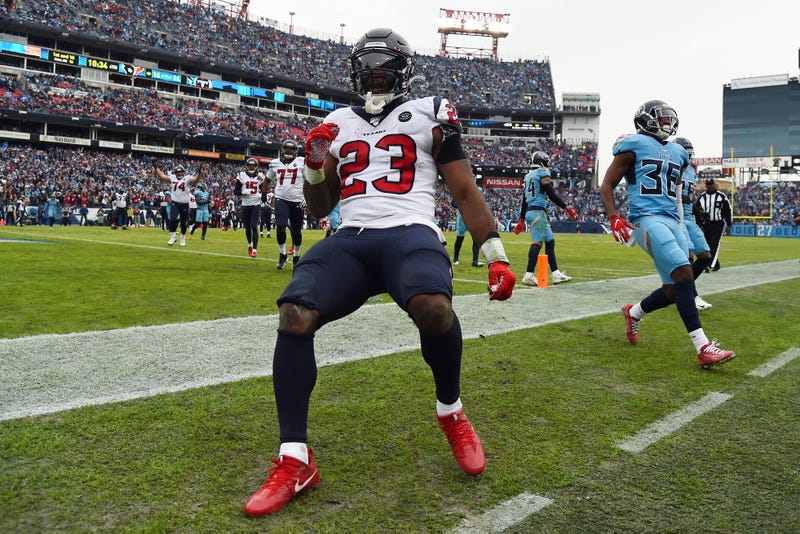 Carlos Hyde was not the running back most people were talking about going into the Texans-Titans game on Sunday.

It was Derrick Henry, who is second in the league in rushing with 1,329 yards at just under 5 yards per carry.

Hyde, however, is having a career season in his first with the Texans.

He was acquired in a trade for offensive lineman Martinas Rankin shortly before the season began, due to the lack of depth at running back with Lamar Miller lost to a torn ACL and D'Onta Foreman cut from the team.

The trade was not a huge headline at the time, given Rankin was unlikely to make the Texans' 50-man roster, and this would be Hyde's fourth team in three seasons.

Hyde played maybe his best game on Sunday against the Titans, with 104 yards on 26 carries and a touchdown run.

Along with the score, Hyde logged the first 1,000-yard season of his career and became the fifth player in Texans history to notch 1,000 yards rushing in a season.

Miller was the last one to do it in 2016, his first season with the team.

"It’s huge to go for 1K for the first time," Hyde said. "It’s been a long journey for me and to come back and have a big year like I’m having now is huge. I got to give thanks to my offensive line though, I wouldn’t have 1,000 yards without those guys. Everybody has played a part in it and I am very grateful for those guys."

Hyde's touchdown run put the Texans ahead of the Titans for good.

After a scoreless first quarter, Houston jumped out to a 14-0 lead in the second quarter and took the advantage into halftime.

Tennessee was able to rally and tie the game before Hyde ran it 10 yards into the end zone on a read-option.

Congrats to @elguapo on his first 1,000-yard rushing season!(via @HoustonTexans)pic.twitter.com/A8mlC4LvcF

"He runs hard," Texans head coach Bill O'Brien said of Hyde after the game. "I mean, he gets his pads down. He’s got good vision. He’s a hard guy to tackle especially when he gets going and he has been like that all year."

Quarterback Deshaun Watson said this is who Hyde has been every week, even suggesting more touches for the running back.

The Texans have not always run the ball consistently this season, whether it be play-calling, execution or matchups that hold them up. Yet Hyde is still running aggressively with patience and vision.

"I doubt he's worried about the other opponent or whoever else is on the other side of the field," Watson said. "I mean, Carlos is always running hard. That's his mentality each and every week. We're glad that he's on our team, and he's healthy and keeps doing what he's doing. He deserves all the credit, he deserves more hype, and he deserves more touches. So, we're definitely going to ride behind Carlos and ride behind our O-line because they're doing a great job for us."